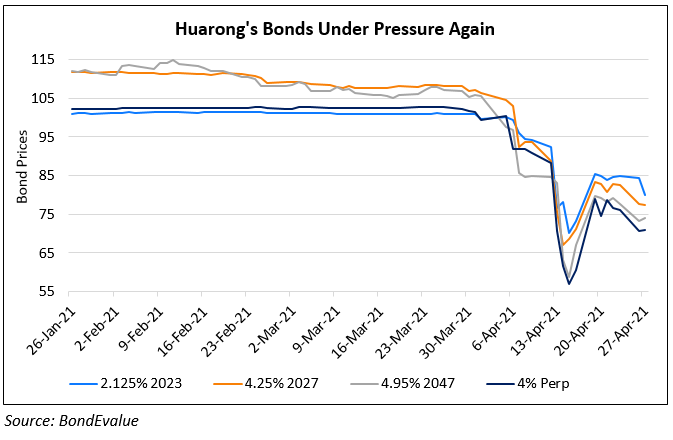 China Huarong’s rating was slashed by Fitch by three notches from A to BBB with the company remaining on Rating Watch Negative. Fitch becomes the first of the 3 major agencies to downgrade Huarong. Fitch downgraded the ratings of the notes issued by Huarong Finance II Co. Ltd, Huarong Finance 2017 Co., Ltd., Huarong Finance 2019 Co., Ltd and senior unsecured notes to BBB from A. Fitch also downgraded the senior unsecured perpetual bonds to BB+ from A-, and the legally subordinated perpetual bonds to BB- from BBB, both by an extra notch.

The rating agency said the downgrade was driven by a reassessment of the government support factors under their Government-Related Entities (GRE) Rating Criteria. Given the government’s limited transparency and responsiveness to support Huarong, Fitch’s “top-down” notching resulted in a rating four levels below China’s sovereign rating of A+ as compared to their standard GRE criteria of up to three notches. Fitch also notes that the delay in publishing results does not seem to indicate material deterioration in the company but does increase uncertainty about liquidity and offshore funding. Huarong is also under review for a potential downgrade by Moody’s and S&P.

Huarong’s bonds filled the losers list with short-dated bonds down 2.5-4% while its longer dated bonds and Perps fell 6-7%.