Huarong’s Bonds Surge on Plans to Redeem its Dollar Perp 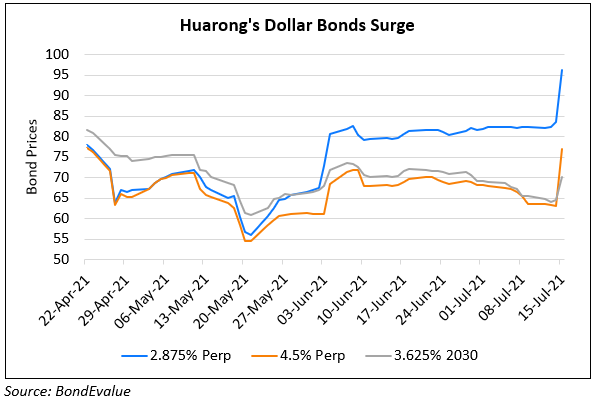 China Huarong’s $500mn 2.875% Perp surged almost 13 cents yesterday to trade over 96 cents on the dollar as the company was said to have started preparations with bankers and lawyers to call back the bond at 100 on its call date of September 14, as per sources. A Huarong representative said the company could not provide an immediate comment on its bond repayment plans. Bloomberg notes that while Huarong doesn’t have an obligation to buy back the bond, most Chinese investment-grade issuers of Perps are expected to exercise their call. In Huarong’s case, failure to call back the bond would heighten concerns about a potential debt restructuring given its financial position is already under scrutiny. The move is a “boost of confidence for Huarong debt across the curve, suggesting the group foresees having enough liquidity to call the perp and is keen to avoid further damage to its reputation,” said Dan Wang, a Bloomberg Intelligence analyst.