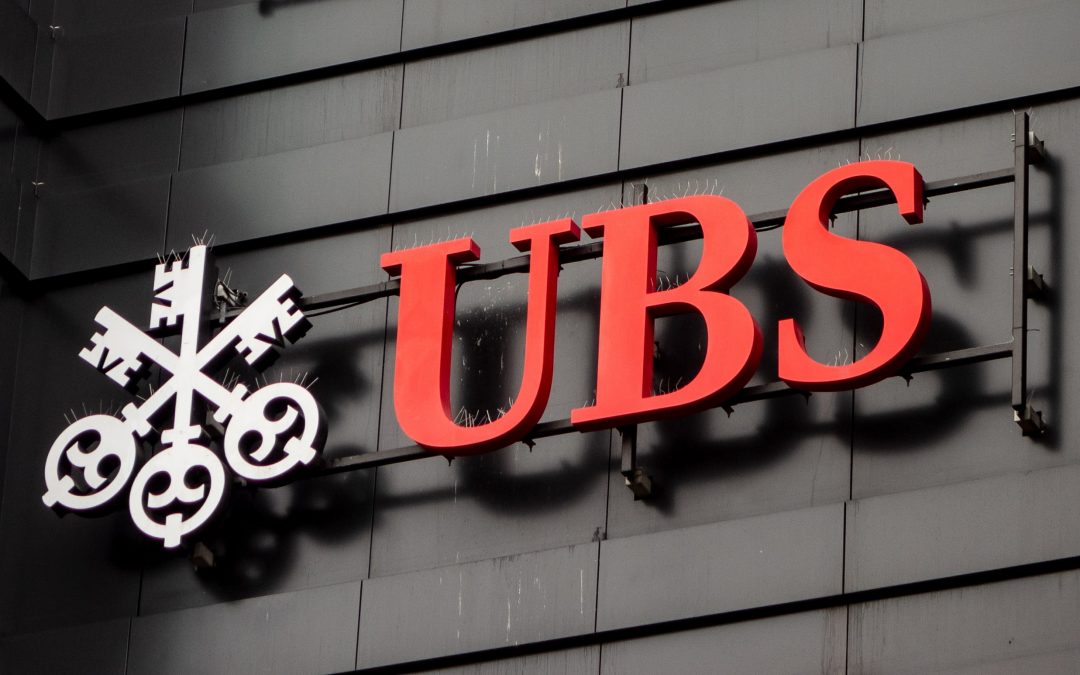 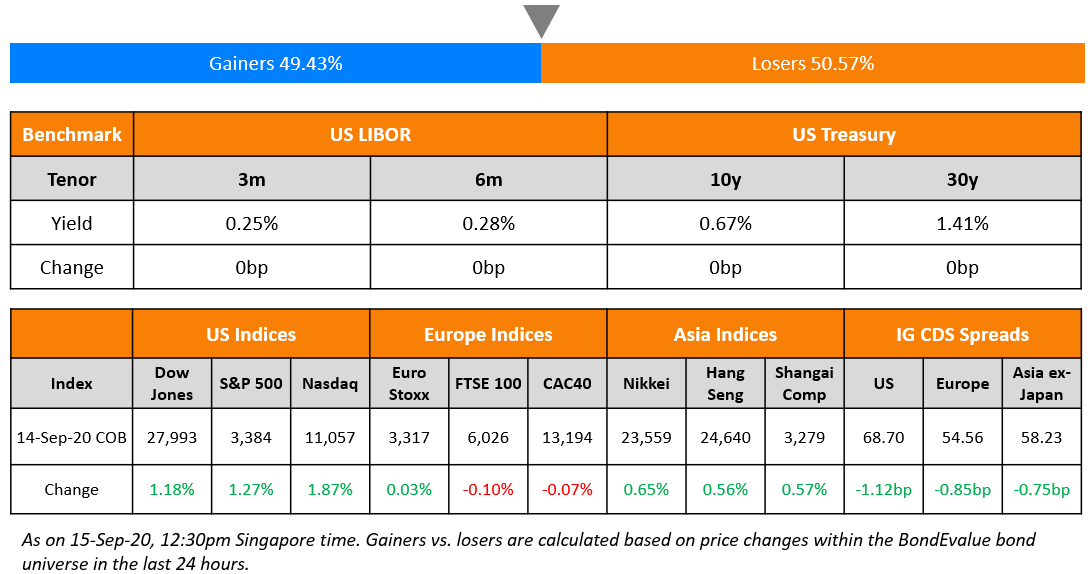 Wall Street gained overnight after more than a week of losses on news that drugmakers are making progress on coronavirus vaccines. AstraZeneca announced the resumption of its advanced clinical trials while Pfizer and BioNTech proposed expanding their joint Phase 3 trials. US benchmark indices rallied 1-2% but European shares were relatively muted. Treasuries were mostly stuck in a tight range and ended higher by 1bp across the curve. The positive sentiment yesterday also breathed life into the Asian primary issuance market with a flurry of new deals and mandates. Asian markets are opening unchanged to slightly lower this morning. 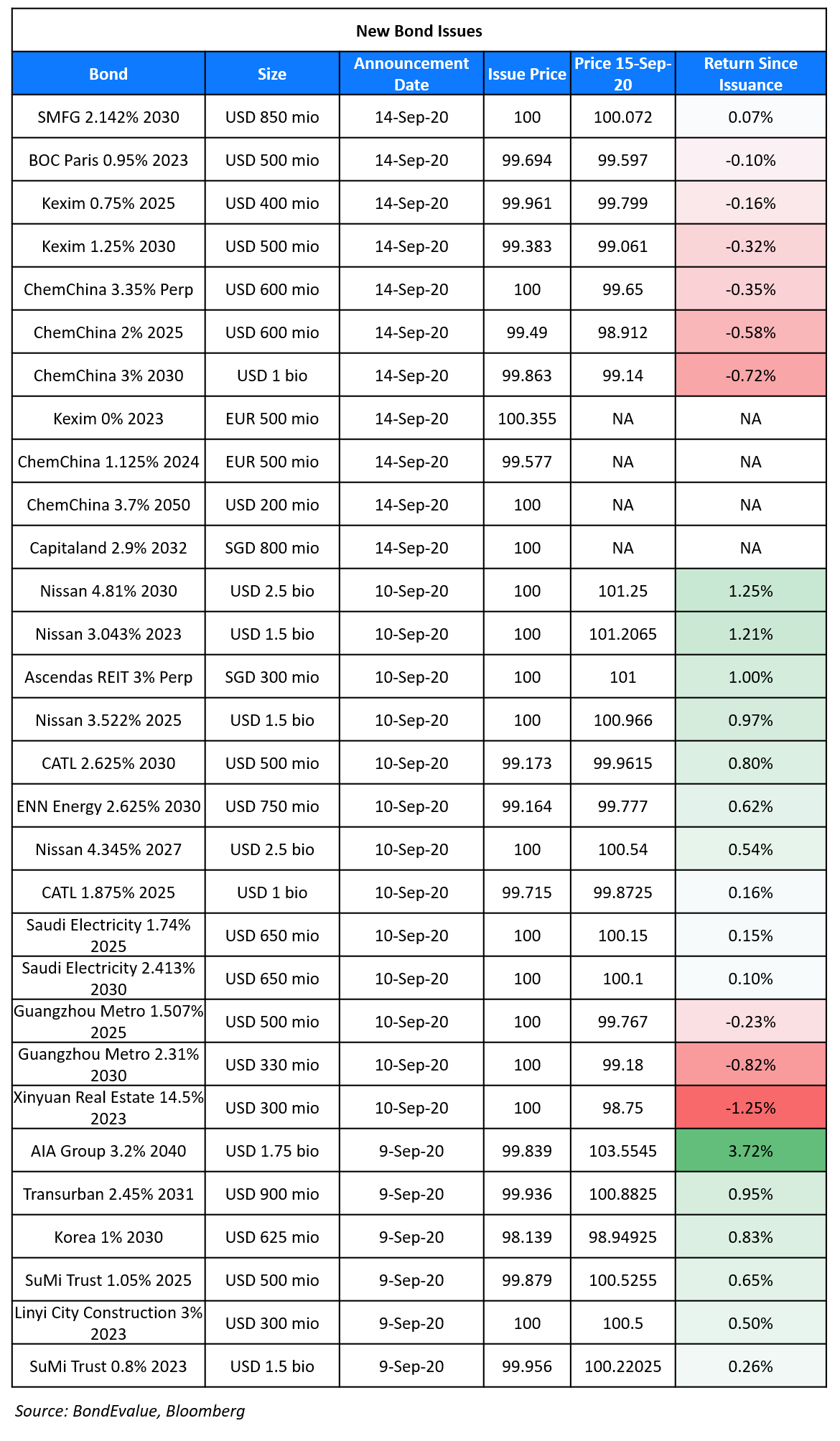 China National Chemical Corp (ChemChina) raised close to $3bn via a multi-tranche, USD and EUR deal. Details of the five tranches are as follows:

Bank of China (BOC) Paris Branch raised $500mn via 3Y blue bonds (Term of the day, explained below) to yield 1.054%, 90bp over Treasuries and 40bp inside initial guidance of T+130bp. The bonds have expected ratings of A1/A/A. The proceeds will be used to finance and/or refinance marine related eligible green projects as defined in Bank of China Limited Sustainability Series Bonds Management Statement.

Export-Import Bank of Korea (Kexim) raised close to $1.5bn via a dollar dual-tranche bond offering, as well as an euro Covid-19 response bond.

The bonds have expected ratings of Aa2/AA/AA-. The EUR 0% 2023 bonds received final orders exceeding €3.9bn, 7.8x issue size. Order books details were not available for the other tranches.

Chairman of Swiss multinational investment bank UBS, Axel Weber, is charting out a plan to tie up with rival Credit Suisse. According to a report from Inside Paradeplatz, the deal nicknamed Signal has Switzerland’s Finance Minister, Ueli Maurer in the knowhow and could be announced in 2021. The merger of the two Swiss banks, which have redefined themselves as global wealth managers in recent years, comes at a time when there is pressure on the banks to cut costs due to the pandemic. If the deal goes through, the merged entity would have total deposits of €1.6tn ($1.9tn), giving stiff competition to not just European giants like HSBC but also to big Wall Street banks. According to the FT, a top-10 shareholder opined that, “There is a case for partnering in some of the businesses like investment banking markets [where] they don’t have the same critical mass as their US competitors,” and added, “but a full merger I cannot see the logic.” The deal could lead to about 15,000 job losses worldwide, reported Inside Paradeplatz. Bonds of both UBS and Credit Suisse were largely stable while their stocks rose by 2.4% and 4.3% respectively.

Delta Air Lines Inc. is looking to raise $6.5bn via a debt issuance backed by its frequent flyer program. Details of the debt sale are as follows:

The deal follows a similar issuance by peer United Airlines in late June, when it raised $6.8bn via bonds and loans backed by its MileagePlus program. The loyal 100mn+ customer base and strong cashflows of MileagePlus enabled United’s issuance to receive an investment grade rating of Baa3/BBB-, three notches higher than United’s junk rating of Ba1/BB-. Moody’s has assigned a Baa1 rating to Delta’s proposed issuance, two notches higher than its issuer rating of Baa3. The new debt will be issued by SkyMiles IP Ltd. (SMIP), a newly-created indirect wholly-owned subsidiary of Delta. SMIP and Delta will be co-borrowers and co-issuers with the net proceeds to be loaned to Delta on an intercompany basis, which it will use for general corporate purposes including refinancing. Moody’s said in its ratings release, “SMIP’s Baa1 senior secured rating considers the importance of the SkyMiles co-brand program to Delta’s franchise, operations and cash flows, which in Moody’s view lowers the probability of default of the financing relative to that of Delta’s other rated obligations.” Delta’s 3.625% and 7% bonds due 2022 and 2025 fell by ~1 point on the secondary markets to currently yield 4.15% and 4.77% respectively.

Uber Technologies raised $500mn via 7.3Y non-call 3Y bonds to refinance its $500mn 7.5% 2023s, which are callable at 103.8 on November 1. The ride-hailing company will save 125bp in interest costs as the new bonds priced to yield 6.25%, 12.5bp inside initial guidance of 6.375% area. The new bonds are rated CCC+, one notch lower than its issuer rating of B-. This is the latest junk rated issuer to tap the primary bond markets to capitalize on record low yields. Uber managed to price the bonds tighter than its outstanding 8% and 7.5% bonds due 2026 and 2027, which are currently yielding 6.79% and 6.44% respectively on the secondary markets. This indicates a negative new issue premium on the new bonds which are rated at par with the old 2026s and 2027s.

In other news on Uber, Alibaba is in talks to invest $3bn in Grab. Part of this stake sale will be from Uber, which acquired a 27.5% stake in Grab when Uber sold its Southeast Asian business to Grab in 2018.

Softbank Shores Up Cash With Sale of Arm to Nvidia & Share Sale; Rumored to Go Private

Over the last six months, Softbank has been on a selling spree signing ~$90bn in offers to sell some of its prized holdings. The Tokyo-headquartered conglomerate is likely to sit on a huge cash surplus after the deals are through, even after its commitment to spend half the amount to pare debt and fund share buybacks. The major deals for the group include the following:

With the deals, Softbank is said to be devising a new strategy. The company recently invested $3.9bn into 25 of world’s largest tech stocks including Amazon, Netflix, Tesla and Alphabet. According to the FT, talks about management buyout led by Mr. Son have gained impetus as Softbank completes its asset sales programme launched in March. David Gibson, an analyst at Astris Advisory Japan remarked that “Money burns a hole in their pocket,” and added Mr. Son is “not going to sit there with cash. He’s an acquisitive guy.”

Blue bonds are an innovative structure of debt financing wherein the proceeds from such issuance are earmarked for marine/water projects related to ocean conservation (hence the name “blue bonds”). These are similar to green bonds, which are earmarked for green or environmentally-friendly projects. Blue bonds became popular in late 2018 when Seychelles issued the world’s first sovereign blue bond. Bank of China Paris Branch is the latest corporate to raise capital via blue bonds, raising $500mn via 3Y blue bonds at a yield of 1.054%. As per Bloomberg, use of proceeds are “to finance and/or refinance marine related eligible green projects as defined in Bank of China Limited Sustainability Series Bonds Management Statement”.

With an emphasis on defense, investors should consider assets that haven’t “skyrocketed on dreams of back-to-normal economic prosperity followed by even lower artificial real interest rates,” Gross said. “There is little money to be made almost anywhere in the world — Covid 19 vaccine or no,” wrote Gross.

“Real cracks are starting to show,” said. “In most high-yielding emerging markets, there is a lack of domestic appetite for absorbing any large expansion in government borrowing.”

“It is not clear that Asian emerging markets have done enough fiscal policy to get through this crisis without leaving long-lasting scars on their economies,” said.

“In this low-yield world, FX will become more important and bond managers will have to go into currencies more to generate returns,” said McIntyre. “If a fixed income manager loses money on currencies, the dissatisfaction tends to be much bigger than the reward for making a profit,” he said. “Nobody loves volatility, but if you are looking for currencies as a source of return, you will have to tolerate it.”

“Bonds are still safe-haven assets but the problem is that you can’t balance equity losses with bond gains any more because of the very low yields,” said Hense.

“For the foreseeable future, there are many good reasons why people would be cautious about getting back into the basis trade,” said Monahan. “That has implications for bond-market liquidity because it’s been a huge driver of activity on most cash-trading platforms” as well as on dealers’ so-called dark pools.

“It impacts the amount of volume in the Treasury futures market,” said di Galoma. “And it will negatively impact liquidity in the off-the-run Treasuries, which are used in many basis trades.”

“Less basis trading by hedge funds means less demand for Treasuries, which could lead to higher interest rates,” Younger said. “It creates a place to put the massive quantity of Treasuries that are being issued to fund the deficit in a way that has less price impact.” 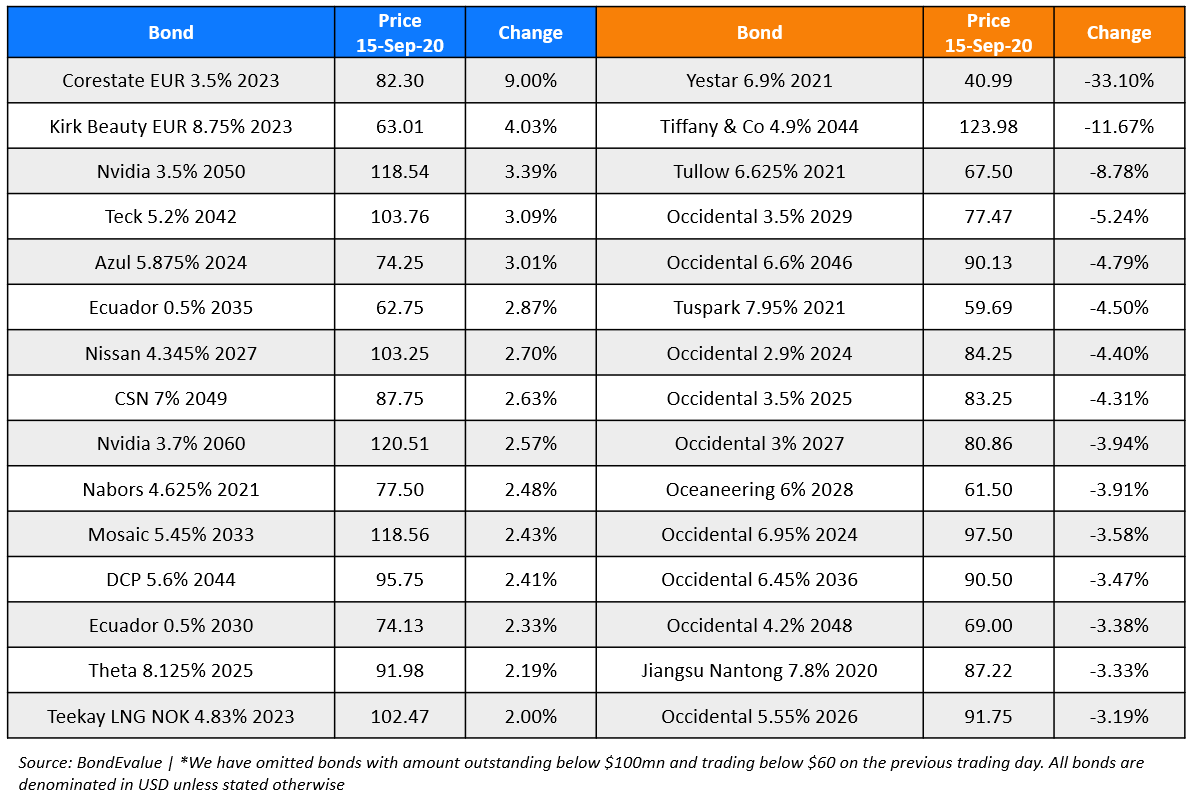