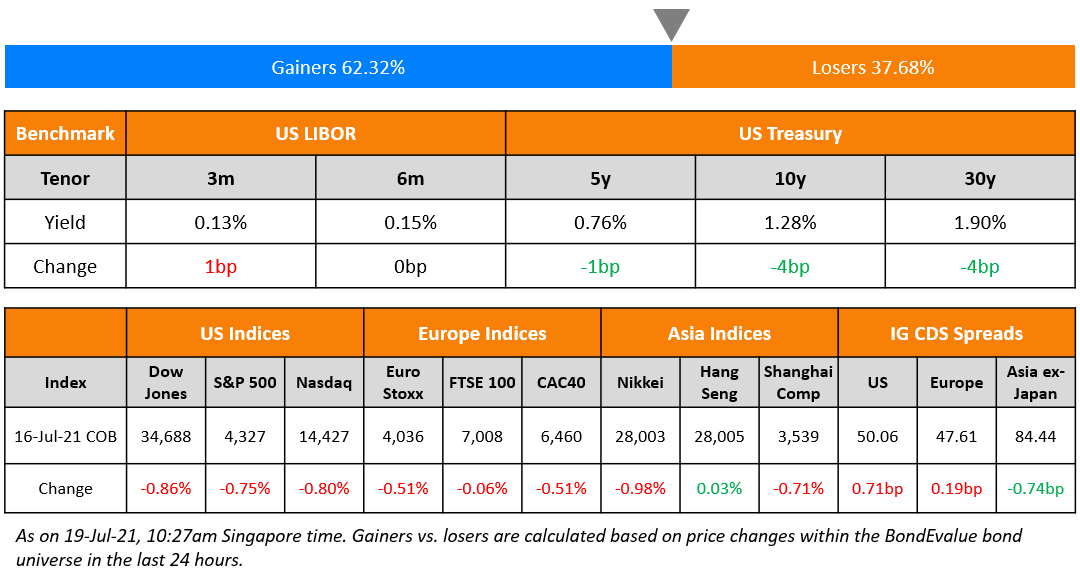 US markets snapped a three week winning streak after the S&P and Nasdaq fell 0.8% each on Friday, ending the week 1% and 1.9% lower respectively after briefly touching records during the week. Upbeat earnings seemed to be overshadowed by weakness in consumer sentiment – the Michigan consumer sentiment index came in lower than expectations at 80.8 for the first half of July vs. 85.5 last month. Consumers expect prices to increase 4.8% in the next year, the highest since August 2008. Energy, down 2.8%, led the losses followed by Financials, Consumer Discretionary and IT, down 1.3%, 0.8% and 0.6% respectively. US 10Y Treasury yields dipped 4bp to 1.28%, trending against forecasts. European indices also ended another day in the red with a surge in Delta variant cases even as the inflation cooled to 1.9% in June from 2% in May – the DAX, CAC and FTSE were down 0.6%, 0.5% and 0.1% respectively. US IG CDS spreads widened 0.7bp and HY widened 3.5bp. EU Main spreads widened 0.2bp and Crossover spreads widened 1bp. Brazil’s Bovespa was down 1.2%. In the Gulf, OPEC+ clinched a deal to phase out oil production cuts by September 2022. Saudi TASI was up 0.2% while Abu Dhabi’s ADX was broadly flat. Asian markets followed the cue from the US markets. HSI, Nikkei, Singapore’s STI and Shanghai were down 2%, 1.5%, 1% and 0.7%. Asia ex-Japan CDS spreads were 0.7bp tighter. Powerlong Real Estate raised $200mn via a 364-day note at a yield of 4.35%. The bonds were unrated. Proceeds will be used for general corporate purposes and offshore debt refinancing.

Huzhou Moganshan High-tech Group raised $210mn via a 3Y bond at a yield of 3.5%, unchanged from price guidance. Proceeds will be used to fund project development and working capital.

This is the ratio of a bank’s capital in relation to its risk-weighted assets. Capital here includes Tier 1 and Tier 2 capital. Risk weighted assets account for credit, market and operational risks with certain weights. Under Basel III, banks must have a minimum capital adequacy ratio (CAR) of 8% of risk weighted assets. CAR is used as a measure to ensure that banks have a cushion to absorb losses and is used while doing stress tests.

On US Treasury yields sinking despite inflation

Jerome Powell, Federal Reserve Chairman
“We are experiencing a big uptick in inflation — bigger than many expected and bigger certainly than I expected — and we are trying to understand whether it is something that will pass through fairly quickly or whether if in fact we need to act.” “One way or the other, we are not going to be going into a period of high inflation for a long period of time, because of course we have tools to address that. But we don’t want to use them in a way that is unnecessary or that interrupts the rebound of the economy.”
Mike Riddell, portfolio manager at Allianz Global Investors
“There’s a lot of head scratching going on.” “On the face of it this move looks pretty counterintuitive.” “None of the grand narratives to explain this rally works for the whole of the last few months,” said Riddell. “That’s why I think it makes sense to talk about positioning.”
James Athey, bond fund manager at Abrdn
“The Fed has effectively removed some of the more extreme scenarios the market was worrying about.” “The more that rate hike expectations are baked in, the less inflation is expected to run out of control.”
Mark Dowding, chief investment officer of BlueBay Asset Management
“Bonds should be naturally allergic in their reaction to inflation,” Dowding said. “We suspect that we may look back at the current period in markets some time later in the year and view some of the trends we are witnessing as relatively strange.”
On the Bank of England’s addiction to bond-buying – Michael Forsyth, UK’s Economic Affairs Committee chairman
“The Bank of England has become addicted to quantitative easing.” “QE is a serious danger to the long-term health of the public finances. A clear plan on how QE will be unwound is necessary, and this plan must be made public.”
On the confusion over whether relentless bond rally is signalling slowdown or Fed misstep
Priya Misra, global head of rates strategy at TD Securities
“We can all see why technicals can move us away from fair value for some time,” Misra said. “But if it stays there for two months, that’s when you start thinking it must be something fundamental here, or big asset allocation here. It’s not just positioning because nobody is fading it. It’s a weird market.” “I am just not putting it on until I see a catalyst,” she said. “I don’t know what the next catalyst will be.”
Ray Remy, co-head of fixed income at Daiwa Capital Markets America
“Bond traders used to worry about inflation.” According to Remy, “somewhat alarming” inflation figures and “nonstop” Treasury supply are sustaining the widespread view that long-term yields are too low. 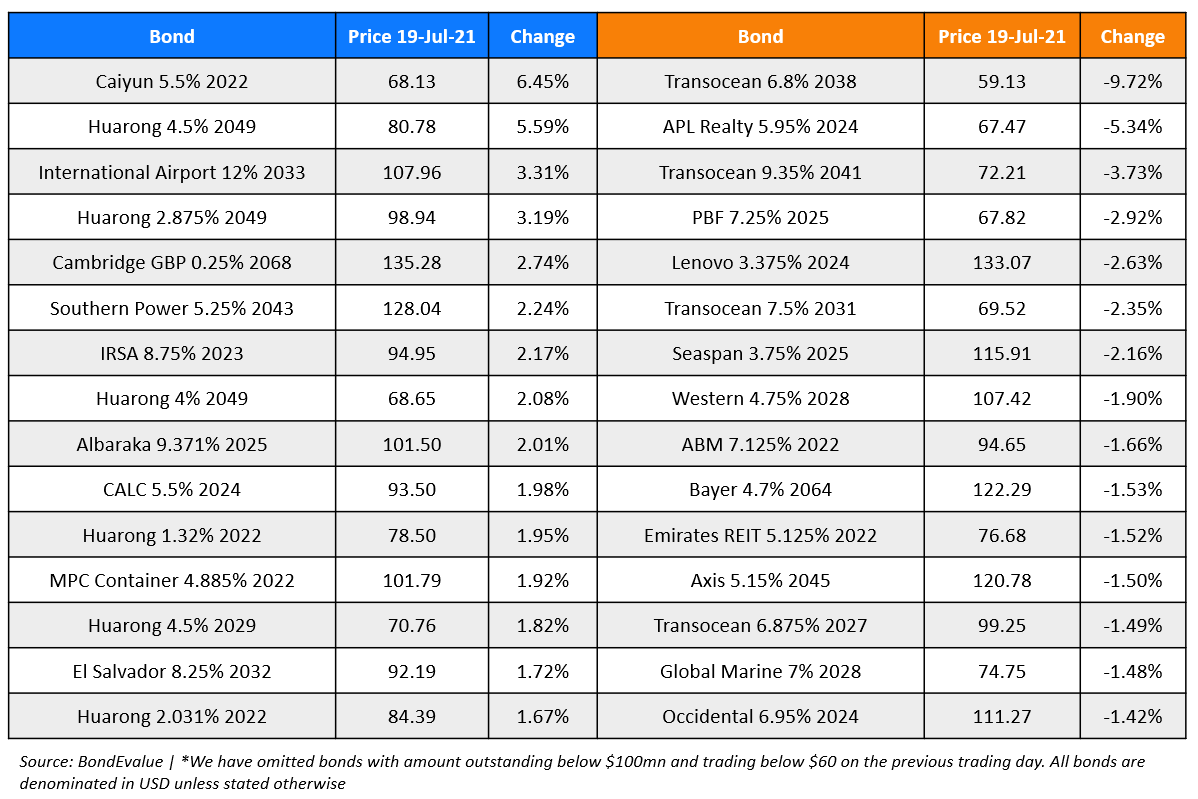