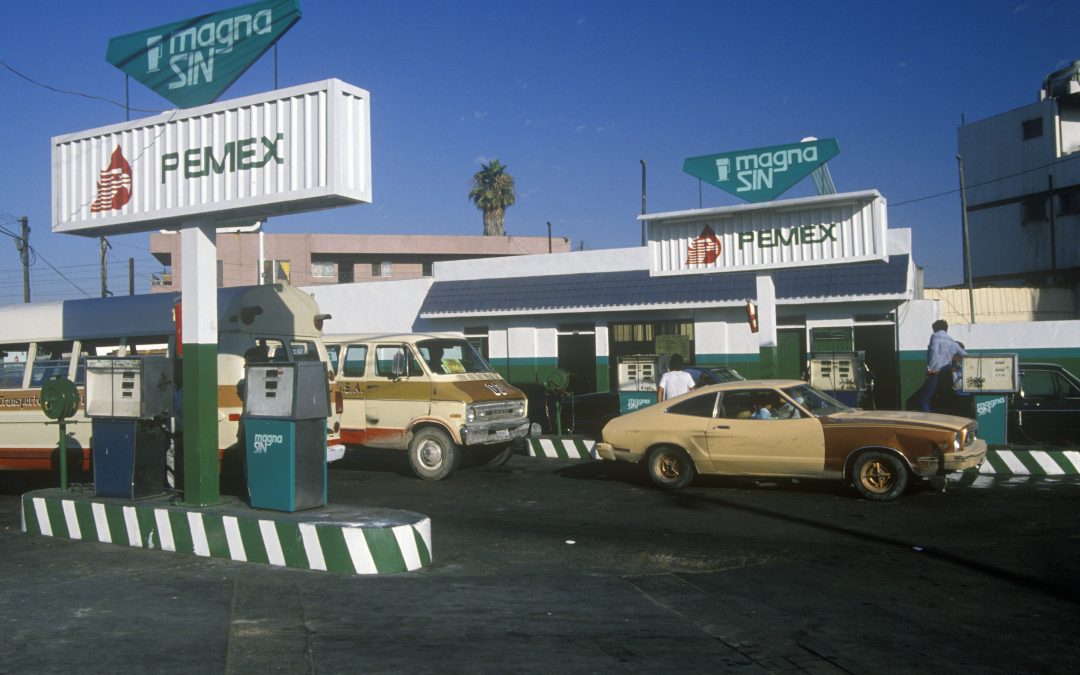 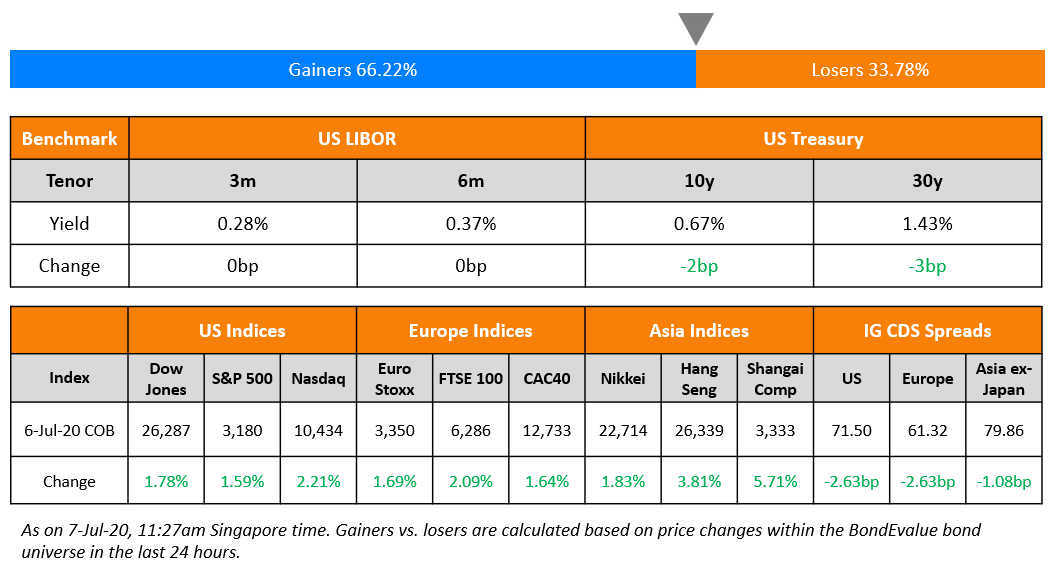 Asian markets are opening lower this morning despite a good rally overnight in western markets. Following the strong NFP number last week, the US ISM services index came out yesterday at 57.1 for June compared to 45.4 for May prompting confidence in the economic recovery. Amazon and Tesla led a 2.2% rally in Nasdaq that closed at its all time high while the S&P and DJI gained 1.6% and 1.8%. Treasury yields were higher by around 1-2 bps across the curve. IG CDS (Term of the day, explained below) spreads in the US and Europe narrowed 2-4 bps. Monday also saw $8.5bn in issuance in the Asian dollar bond market led by Mizuho Bank and Nomura Holdings. Issuers are rushing to raise funds in the primary market with Monday’s calendar already bringing $15.4bn in the US to an expected weekly supply of $15b-$20bn. 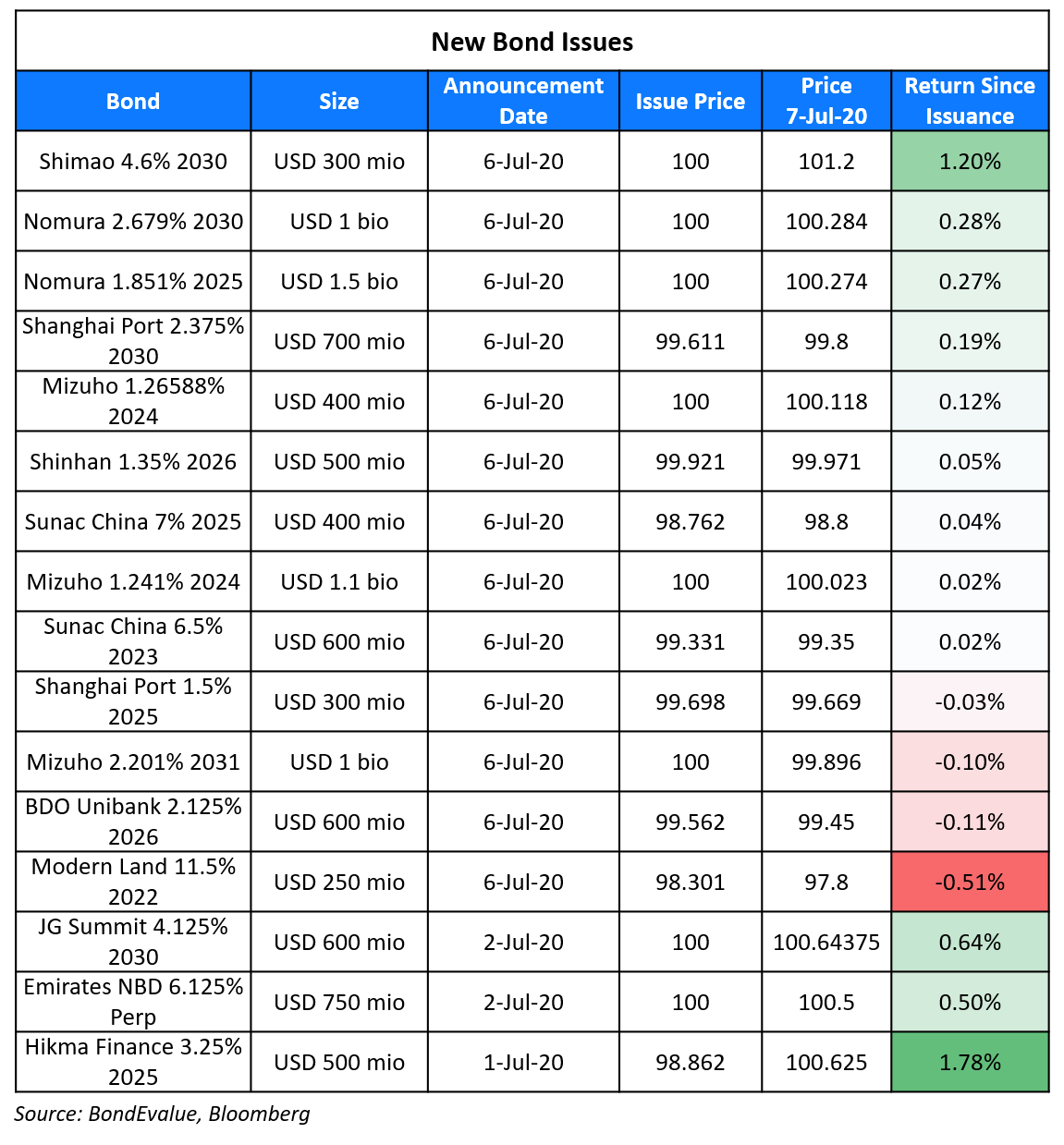 Mizuho raised a total of $2.5bn via a three-part diversity and inclusion tranche. It raised:

The bonds are expected to be rated A1/A-.

Shinhan Financial Group raised $500mn via a 5.5Y Covid-19 Resilience Social Bond, at a yield of 1.365%, 105bp over Treasuries and 40bps inside initial guidance of T+145bp area. Shinhan intends to allocate the net proceeds to support SMEs and underprivileged individuals affected by the Covid-19 pandemic.

Shanghai International Port raised a total of $1bn via a two-tranche deal. It raised $300mn via 5Y bonds at a yield of 1.563%, 125bp over Treasuries and 60bp inside initial guidance of T+185bp area. It also raised $700mn via 10Y bonds to yield 2.419%, 172.5bp above Treasuries and 52.5bp inside initial guidance of T+225bp area. The bonds, expected to be rated A1/A+, drew final orders exceeding $6bn, 6x issue size. Shanghai Port Group (BVI) Development 2 is the issuer and the Shanghai-listed parent company is the guarantor.

Philippine bank BDO Unibank raised $600mn via a 5.5Y bond issued at a yield of 2.21%, 190bp over Treasuries and 45bp inside initial guidance of T+235bp area. The bonds, expected to be rated Baa2, received orders worth $2.9bn, almost 5x issue size. BDO, which is Philippines’ largest bank, last tapped the dollar bond market in 2017 with a 5.5Y bond maturing in March 2023 that is now yielding 1.74% on the secondary markets.

Delhi International Airport Downgraded To ‘B+’ On Slow Recovery In Traffic, Remains On CreditWatch Negative

India’s efforts to contain the virus by extending the partial lockdown has further reduced the pace of recovery in air passenger traffic. Even as the country limps back to normalcy, only 30% of domestic routes were restarted in May. The weak passenger traffic has led S&P to downgrade Delhi International Airport Limited (DIAL) to B+ from BB- while keeping it on a CreditWatch. This is based on predictions that cash flow from operations is likely to remain below 5% over the next one year compared to the earlier expectations of 5%-9%. The CreditWatch reflects the risk of increased leverage and liquidity pressures in case the income from commercial property development is delayed or if the revised tariff is less than 50% of the current tariff, especially as Bharti Realty Ltd continues to delay its payment pending approval from the Airport Authority of India (AAI). According to the rating agency, international traffic in India could decline as much as 75% and domestic traffic by 55% in the ongoing fiscal compared to previous expectations of a drop of 25-30% in international traffic and a drop of 20-25% in domestic travel for Indian airports. As per S&P, DIAL’s current balance sheet is adequate to sustain it over the next 12 months, however the delay of incoming tariffs could put some pressures on its bonds maturing in February 2022.

Pemex Asks Contractors to Wait Till Next Year for Payments Due

Mexican state-owned giant Pemex is asking its contractors if they can wait till next year for payments that are already due, according to Bloomberg. Pemex has a debtpile of $105bn already, making it the largest borrower among oil companies in the world. According to people with knowledge of the matter, three contractors are being asked to defer $115mn worth of payments. Based on this, there can possibly be billions worth of payments across Pemex’s entire supply chain outstanding. The people explained that contractors are required to submit their invoices on Pemex’s website and receive a confirmation number and an estimated time of payment. The system is no longer issuing invoice numbers, known as “copade”, in some cases.

Wilbur Matthews, founder of Vaquero Global Investments LP who trades in Pemex bonds said, “If Pemex refuses to give you an invoice number, it doesn’t become a payable to Pemex and it doesn’t become a receivable to the company, so it’s like accounting limbo land. But the reality is that Pemex owes them this money. What it means is that Pemex has a massive additional debt burden.” Pemex’s dollar bonds traded up by ~1-2 points since yesterday’s close on the secondary markets.

Oaktree Capital has injected ₹2,200 crore ($295mn) into Indiabulls Housing Finance Ltd (IBHFL) giving it much needed liquidity to meet its payment obligations. IBHFL managed to secure this funding by pledging a part of its real estate loans to the global stressed assets investor, according to Livemint. Oaktree plans to buy non-convertible debentures (NCD) guaranteed against the underlying real estate portfolio valued at ~₹4,500 crores ($603mn), which is almost 2x the value of the fund infusion. IBHFL is also in talks to refinance ₹7,000 crore ($938mn) with other private investors according to a company source. IBHFL has been under stress for some time and its rating outlook was reduced to B3 from B2 by Moody’s in March. The company has been trying to cut costs and had laid off ~2,000 employees in March while the management took a 35% pay cut. Outstanding loans for the stressed financier stood at ₹1.02 trillion ($13.7bn) as of December 31, 2019 with an average cost of capital at 8.8%. A similar transaction was undertaken by the now bankrupt Dewan Housing Finance Ltd (DHFL) last year when it sold ₹1,735 crore ($232mn) of wholesale loans to Oaktree.

Ecuador & Its Bondholders Reach a Deal to Restructure Debt

Ecuador arrived at a preliminary agreement with its largest bondholders to restructure $17.4bn of debt. The country plans to exchange 10 existing bonds maturing between 2022 and 2030 for three new bonds maturing in 2030, 2035 and 2040 and reducing the average coupon to 5.3%. Under the new agreement, interest payments will resume from the start of 2021 and the earliest principal would be due in January 2026. The proposal still needs approval from some of the remaining creditors before it can be finalized. President Lenin Moreno said on Twitter, “With this, we’re freeing up $16 billion over the coming 10 years.” The new proposal would generate savings of $1.4bn in 2020 and practically gives Ecuador a grace period of two years, Finance Minister Richard Martinez added in a conference call.

The Ecuador government has won praise from creditors, who said that the Ecuadorian officials have been much more reasonable than their counterparts in Argentina, where restructuring talks have dragged on for months. Argentina seems to have finally arrived at an agreement with bondholders after sweetening its offer, as reported by us yesterday.

Demand for new dollar bonds from Asia ex-Japan jumped to a 15-month high, based on orders as a multiple of issue size. According to Bloomberg, orders for new bond issues jumped to 6.1x issue size in June, the highest level since March 2019. New dollar bond issues have been lapped up by investors since the rout in March, leading to a further rush to the primary markets by corporate issuers. The deals that stood out in terms of investor demand were Philippine telecom company PLDT’s $600mn dual-tranche deal that received orders worth 17x issue size, and Thai oil company PTTEP’s $500mn bond that received orders worth almost 15x issue size. Raymond Chia, head of credit research for Asia ex-Japan at Schroders Investment Management said, “Specifically, demand for blue chip, high-yield Philippine issuers and selected Chinese investment-grade companies boosted orders for Asia’s offshore bonds in June.”

A Credit Default Swap (CDS) is a financial contract between two counterparties that allows an investor to “swap” or offset the credit risk with another investor. CDS acts like an insurance policy wherein the buyer makes regular payments to the seller to protect herself from an issuer default. In the event of a default, the buyer receives a payout, typically the face value of the bond or loan, from the seller of the CDS as per the agreement.

Indonesia’s central bank has agreed to buy 574.59 trillion rupiah ($40 billion) of government bonds this year, of which some 397.56 trillion rupiah of bonds will finance public interest programmes and the cost will be fully borne by the central bank, Indrawati said. The rest will carry interest rates below the central bank’s 3-month reverse repurchase rate and will support recovery schemes for some businesses, she said. “This policy is aimed at invoking confidence in our economic recovery, healthcare response and to create more certainty,” Indrawati said.

BI Governor Perry Warjiyo said the scheme will have a small impact this year on inflation, which hit a 20-year low in June due to weak demand. He added that “Our capital is strong, and it will not affect how BI conducts our monetary policy according to the framework that we have established for years,” he said.

“China of course still has got a meaningfully positive interest rate both real and nominal, which is relatively rare globally,” Powell said. BlackRock Inc. expects stocks and bonds in China, and its trading partners such as South Korea, Japan, and Taiwan, to do better than global emerging markets over the next six to 12 months, according to Ben Powell. “China, if necessary, has got the ability to do more on both monetary and fiscal measures. We believe that Japan is well positioned from a broad policy perspective to recover relatively quickly from the virus downdraft,” Powell said. “The combination of domestic policy support, a relatively benign virus experience, and gearing into the global economic recovery can translate into Japan equities performance.”

“We look forward to supporting Argentina’s offer as it provides… debt sustainability that is crucial for durable, high and inclusive economic growth.”

“Considering everything that the country is going through, it looks to like a fairly good offer.”

The offer was “reasonable” and calculated its value at 53 cents on the dollar at an exit yield of 10%. She added, however, that the lack of a previous accord with key bondholder groups was a hurdle. “There is still deal risk as this last phase was not negotiated with the Ad Hoc and Exchange Bondholder joint group,” she said, adding that the pair, which together hold around $21 billion of the total eligible bonds, could block a deal. 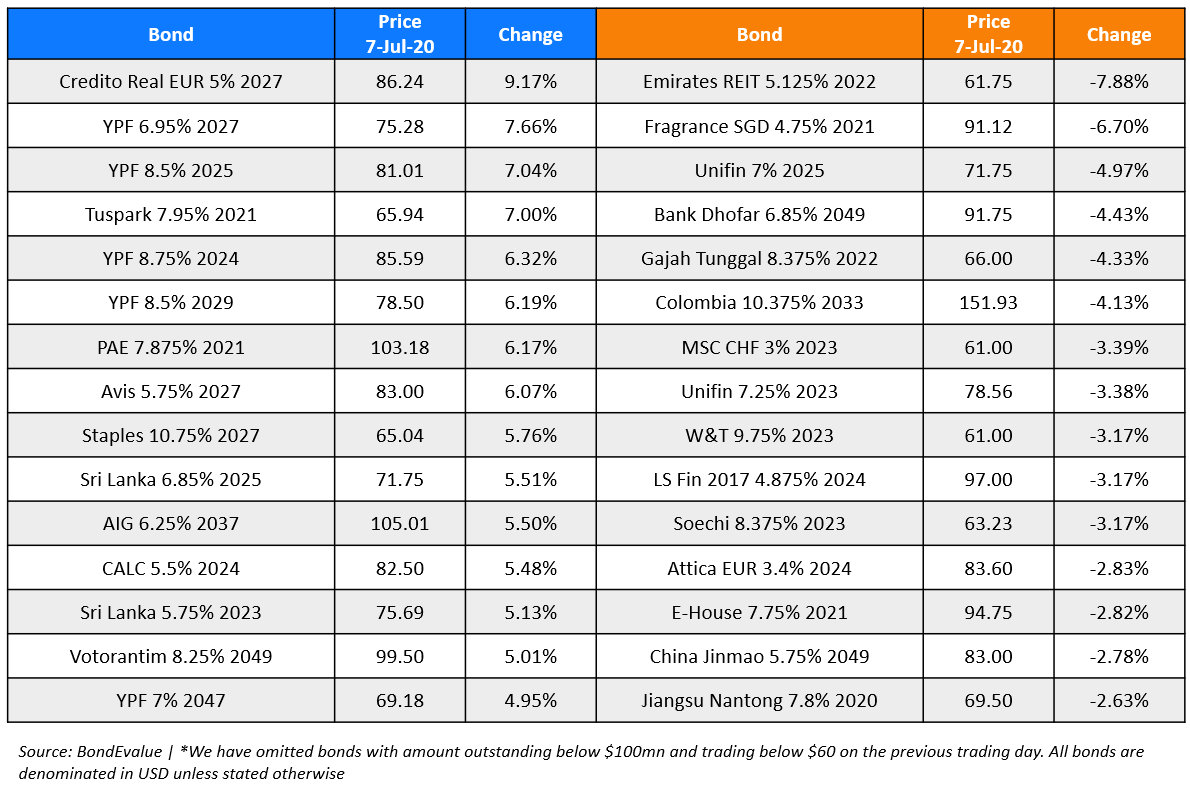