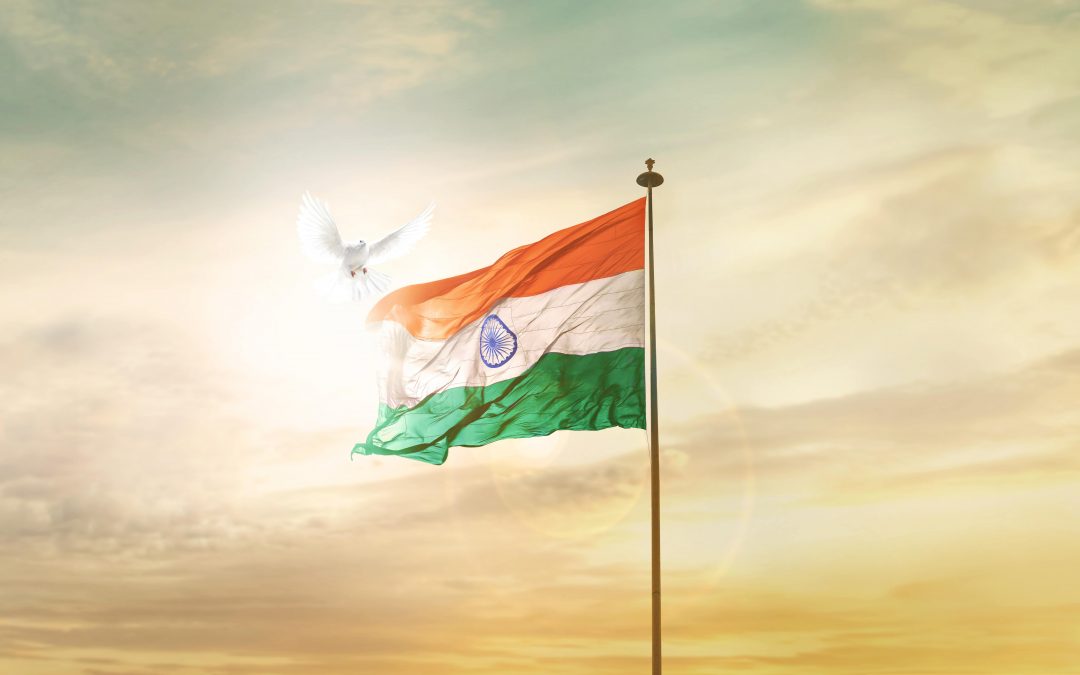 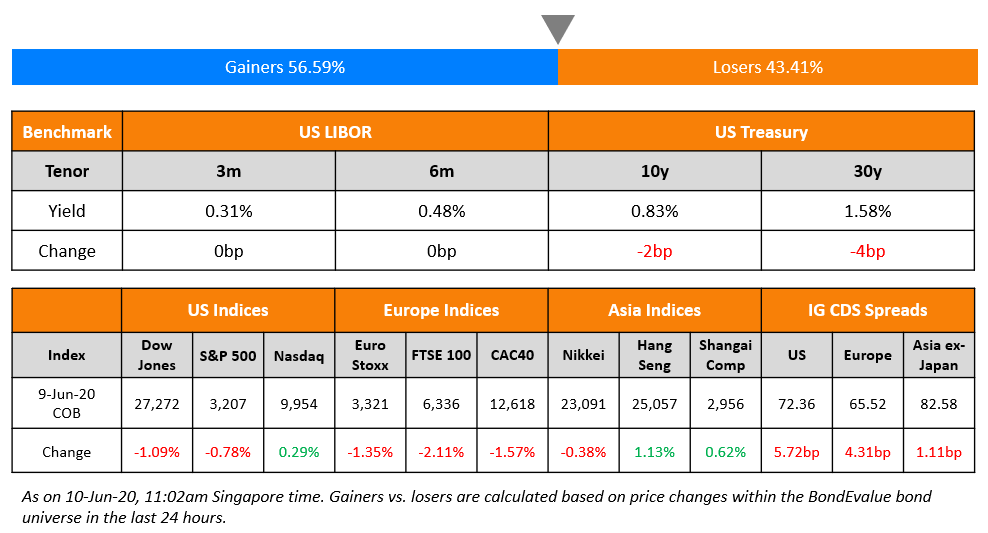 The rally in markets cooled off overnight over concerns that the move could have overshot economic prospects as well as some profit taking. Tuesday also saw German figures that pointed to the biggest collapse in exports from Europe’s largest economy on record in April, while data from Japan showed orders for new machines fell at their fastest rate in a decade during May. The Nasdaq was an exception but other indices and European stocks were all down for the day. The Federal Reserve meets today and any suggestion that policy will not remain dovish for the foreseeable future could potentially lead to a sell-off. US treasuries were higher as the halt in the rally came with some bid for safe-haven assets. Bond issuance in Asia continue at a strong pace and in the US IG market, issuer’s raised nearly $7bn bringing the weekly tally to $19.1bln despite the drop in sentiment. 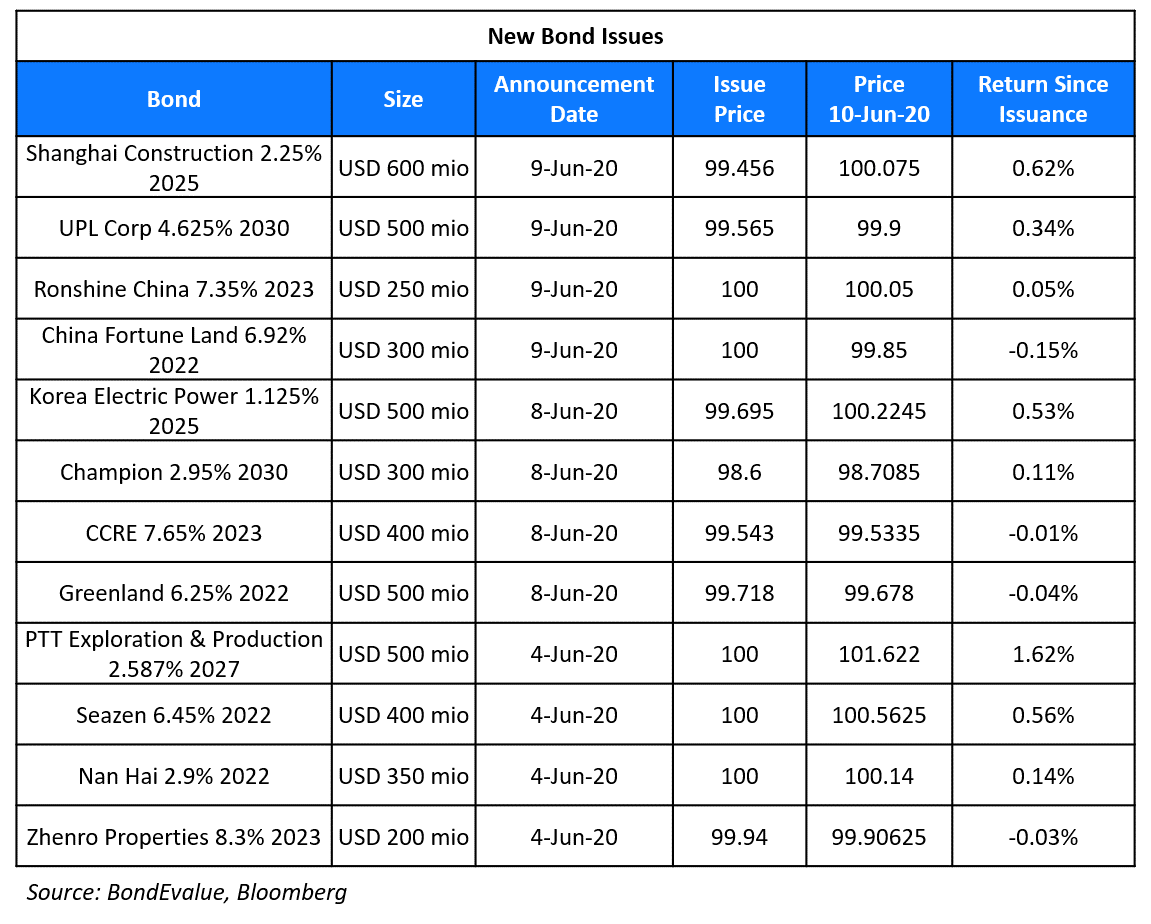 UPL raised $500mn via 10Y bonds at a yield of 4.68%, 385bp over Treasuries and 50bp tighter than initial guidance of T+435bp area. The bonds met with reasonable demand with orders exceeding $2bn, 4x issue size. UPL is rated BBB-/Baa3/BBB-, at par with India’s sovereign rating. In fact, Moody’s has a stable outlook on UPL as against a negative outlook on the sovereign. As per IFR, Moody’s said that UPL’s business was fairly resilient during the coronavirus pandemic and national lockdown, and noted that only 10% of its revenues come from India.

Shanghai Construction Group raised $600mn via 5Y bonds at a yield of 2.366%, 195bp over Treasuries and 50bp inside initial guidance of T+245bp area. The bonds, expected to be rated Baa2, will be issued by wholly owned subsidiary Yongda Investment and guaranteed by the parent. Shanghai Construction Group Corp and Shanghai Guosheng (Group), both wholly owned SOEs of the Shanghai municipal government, owned 30.19% and 22.89% of the guarantor as at end-2019.

Moody’s downgrades Hilong to B3, places ratings on review for further downgrade

The Hong Kong government is leading a massive HKD 39bn ($5bn) bailout package for flag carrier Cathay Pacific on Tuesday. The bailout was led by the fact that Cathay controls more than half of passenger traffic and carries nearly 40% of cargo in Hong Kong, making it critical to Hong Kong’s aviation sector. As part of the deal, the government will buy HKD 19.5bn ($2.5bn) worth of preferential shares via a new company called Aviation 2020. It will also provide a HKD 7.8bn ($1bn) bridging loan and potentially purchase warrants worth as much as HKD 1.95bn ($251.6mn) later. The preferential share purchase and the bridge loan amount to HKD 27.3bn ($3.5bn), 1.5x the company’s market cap. “If this challenge is not properly addressed, it would harm Hong Kong’s international aviation hub status, and adversely impact other economic activities, to the detriment of the overall interest of Hong Kong,” said Financial Secretary Paul Chan Mo-po. 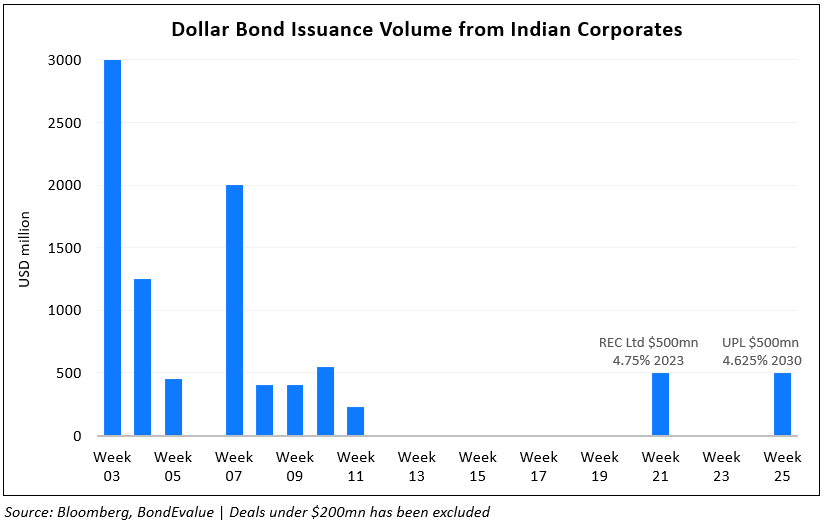 Total year-to-date (YTD) issuance (excluding deals less than $200mn) stands at $9.28bn, 20% lower than the same period last year ($11.65bn). Given the upbeat sentiment in the market, primary dollar issuance from Asian corporates has picked up. State Bank of India is considering a dollar bond issuance later in the year, and so is Power Finance Corp (PFC). The company is in talks with bankers to raise up to $750mn via dollar bonds. “We are in discussions with our arrangers. We have not decided when to launch the issue or the size. Whenever we feel is the appropriate time, we will launch the issue,” said Naveen Bhushan Gupta, Director — Finance of the state-owned company.

Indian corporate dollar bonds are currently trading marginally lower than the start of the year, with some exceptions such as Reliance and IRFC. To see how these bonds have fared on the secondary markets, we looked at bonds closest to a 10Y tenor from investment grade corporates. We have compared bond prices at the start of the year, the YTD low, and the current price in the table below, sorted by YTD return.

It is interesting to see that these bonds have rallied an average of 17.8% since their YTD lows in late-March/early-April. Indian dollar bonds have risen by 1-2% since the sovereign downgrade by Moody’s on June 1, indicating that investors have shrugged off the credit rating action on the country.

Amidst high unemployment, a currency crisis and an economic contraction in the last three years, Argentina had defaulted on May 22. We had reported on June 2 that the Argentinian government was in the process of restructuring its $65bn debt. IMF estimated a difference of 1.5% between the revised offer by the government and a counter offer by the creditors while noting that there was little scope to increase payments to the creditors beyond this plan. There is fresh news about the government considering an offer for warrants linked to “Agricultural Exports” in a bid to close in the gap for the restructure. This offer is supported by the larger bondholders as export data provides a higher transparency compared to the GDP data published by the government. However, this also comes along with a non-disclosure document (NCD) potentially including restrictions on trading and participation in credit-default swap auctions. This has resulted in a stand-off between the government and some creditors. This discord with the creditors including BlackRock Inc and Ashmore led Economy Minister Martin Guzman threatening to exclude some bondholders including Ashmore from the next round of talks and could lead to delays for a June 12 deadline.

There was a strong demand for new sovereign bonds in Europe. Central banks across have been implementing measures to counter the effects of lockdown due to the pandemic. In a bid to raise the government borrowing to cover the ongoing pandemic, governments have turned towards the debt market. The United Kingdom sold new 30Y government bonds worth £9bn with an issue price of 96.343 and a gross redemption yield of 0.7601 on Tuesday, reported Business Times. The new bonds received orders worth £72.80bn, closing in on last month’s record of £84bn. 91% of the allocation was to domestic investors indicating a robust demand. Meanwhile, Ireland also raised  €6bn through a 10Y bond issuance on Tuesday. The issue resulted in record issuance of  €66bn, which was 2x the previous record for Irish sovereign bonds, reported Reuters. Tuesday also saw Greece launching its third bond issuance with a 10Y issue with an expected yield of around 1.5% to raise €2.5bn ($2.8bn) as reported by Associated Press. Greece had earlier raised  €2.5bn through 15Y bonds and €2bn through 7Y bonds in January and May respectively. Reuters had previously reported that Spain’s 10Y €15bh received record orders in late April. The strong demand for the sovereign bonds, especially from Greece and Ireland which had to be bailed out in the past, shows investors’ appetite for the new bonds.

Turkey Signs Deal with Euroclear After Talks for 8 Years

The Turkish government reached a deal with one of the world’s largest bond clearing systems, Euroclear after eight years of discussions. The deal will increase foreign investors’ access to bonds denominated in Turkish lira, US dollars, Euros and gold, Turkey’s Treasury said Tuesday as per a Bloomberg story. By making those domestic borrowing instruments “entirely Euroclearable (Term of the day, explained below), we have further aligned our capital market framework with the globally recognized standards” Treasury and Finance Minister Berat Albayrak was cited as saying in a statement published by Brussels-based Euroclear.

Euroclear is a financial services company that specializes in the settlement of securities transactions as well as the safekeeping and asset servicing of these securities. A capital market becomes Euroclearable when it establishes a clearing and settlement link with Euroclear, the international central securities depository (ICSD), and adopts the legal, regulatory and other market standards that allow Euroclear to provide the same ease of access and degree of asset protection expected by international investors in any well-established market. Euroclear settles domestic and international securities transactions, covering bonds, equities, derivatives and investment funds.

James Gorman said the worst effects of the pandemic had passed for the US labor market and economy. This comes after unexpected gains in US employment data for May. Against that improving backdrop, Mr Gorman justified the payouts to bank shareholders. “We should be paying out a dividend. I’ve said that right from the get-go . . . We’re going to cover our dividend very easily this year.” On a less positive note, he said that the merger and acquisitions market was “basically dead” for the second half of the year. “I’m not worried about that, that’s just a cyclical thing, that’ll flow through just fine in time.”

On delisting Chinese companies from the US exchange – Jesse Fried, a professor of law at the Harvard Law School

Amid a tide of anti-China sentiment stateside, the U.S. Senate last month passed a bill that could ban many Chinese companies from listing their shares on U.S. exchanges, or raising money from American investors. Jesse Fried told CNBC that while the goal of this legislation is to protect American investors, he is “not sure that this bill … will actually make American investors better off.” “Because, in my view, it’s highly unlikely that China is going to allow inspections of audits done in mainland China…to the disadvantage of American investors…so I think in terms of protecting American investors, this bill if it becomes law, could backfire,” Fried warned.

“We think in the next month, maybe two on the outside, you’ll see the 10-year top 1% and it should be comfortably above that level by the end of the year,” said the Wells Fargo head of macro strategy. “The low-end would be 1%, and the upper bound maybe 1.5%,” he said. “Our official call as a firm is 1.15%.” It is a departure from Schumacher’s warning last winter. In early March, the 10-year yield faced a record low.

On an Unpredictable Yield Curve – Hamish Pepper, a fixed-income and currency strategist at Harbour Asset Management

Investors are interested in the possibility of the yield-curve control policy being implemented to cap borrowing costs as the economy recovers. Most expect a low-yield target for shorter maturities. “Having that yield-curve control or very supportive forward guidance is a critical component for investors,” said Hamish Pepper. “Markets need more than just the promise of buying whatever it takes.”

“In 2019 more than half of global issuance was concentrated in the EU and almost half of global green bond issuance was denominated in euro,” the ECB said in an annual review of the currency’s international role. The market segment for green bonds is growing, rising from 0.2% of global bond issuance in 2014 to 2.85% in 2018, or US$205 billion, ECB economists found. Of that amount, 45.4% was issued in euros, compared with 25.7% in dollars and 28.9% in other currencies. 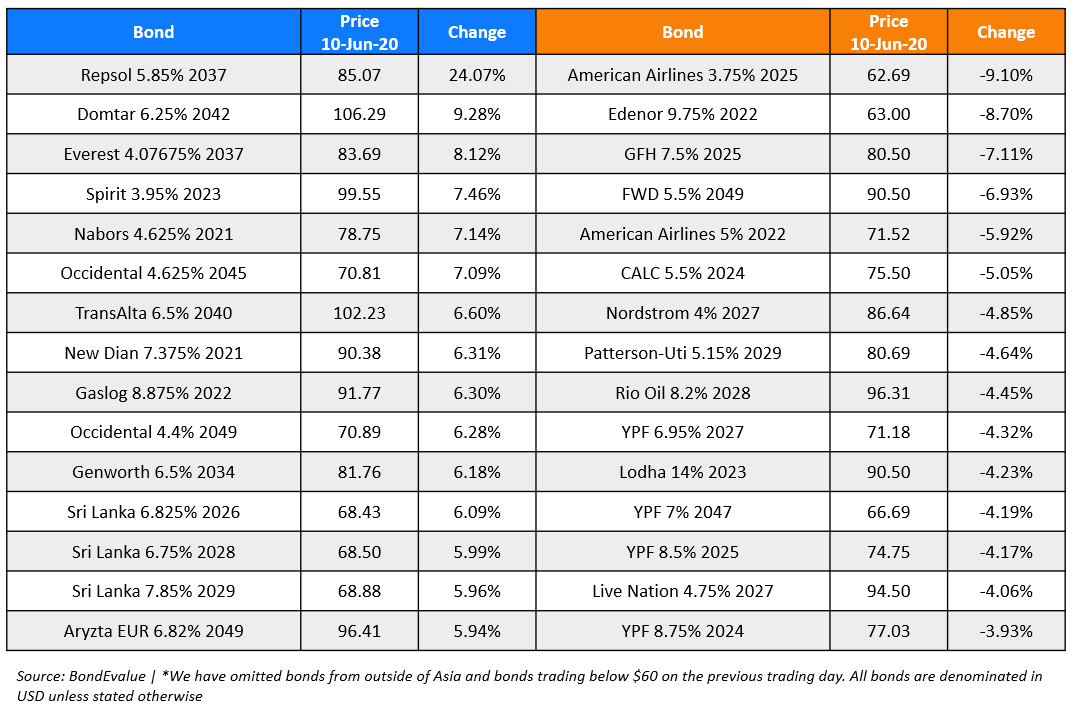