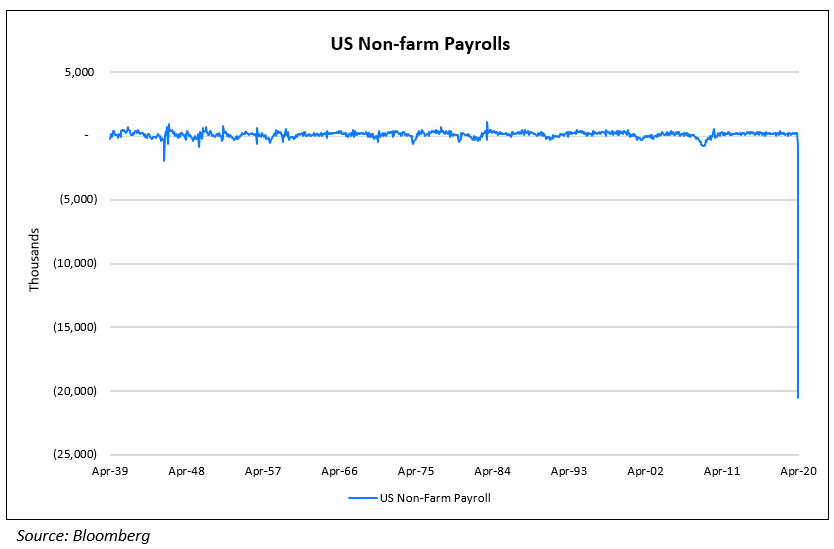 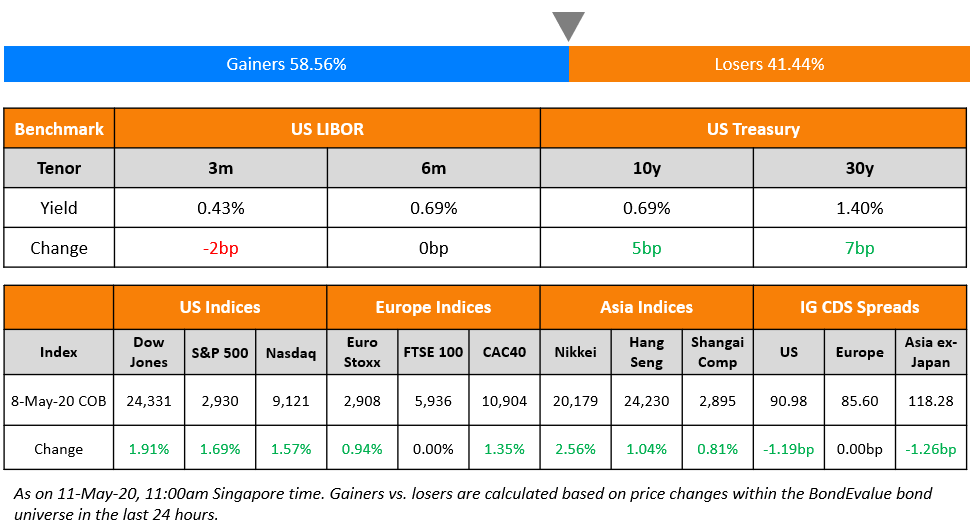 Friday saw the worst US unemployment numbers since the Great Depression. Despite this, US and European markets rallied as the numbers were better than expected. Non Farm Payrolls for April came in at -20.5mn vs -22mn expected and unemployment rate was 14.7% vs 16% expected. Sentiment also improved with signs of calming in the US-China trade tensions as well as from the relaxation of lockdown restrictions. Asian markets are opening higher by around 1% on a positive tone this morning and US index futures are higher by around 0.5%. High grade US firms issued a total of $94bn last week and spreads for Asian dollar bonds tightened for a second consecutive week. 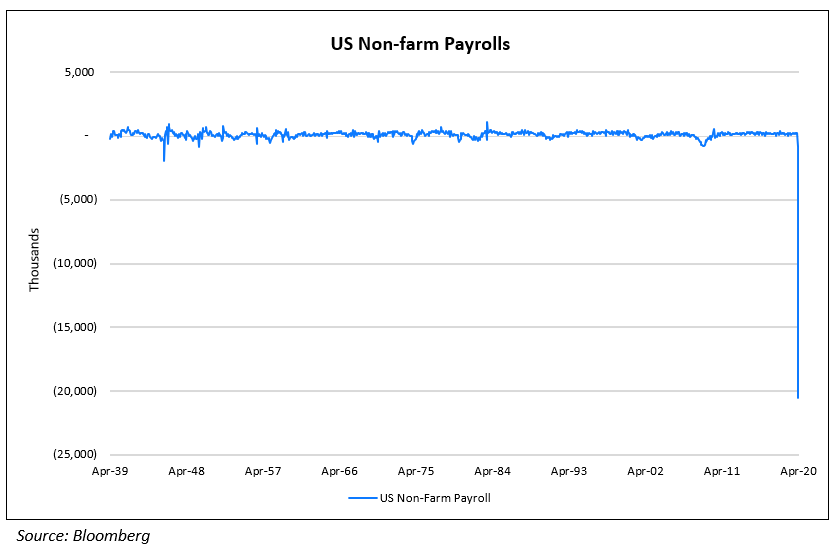 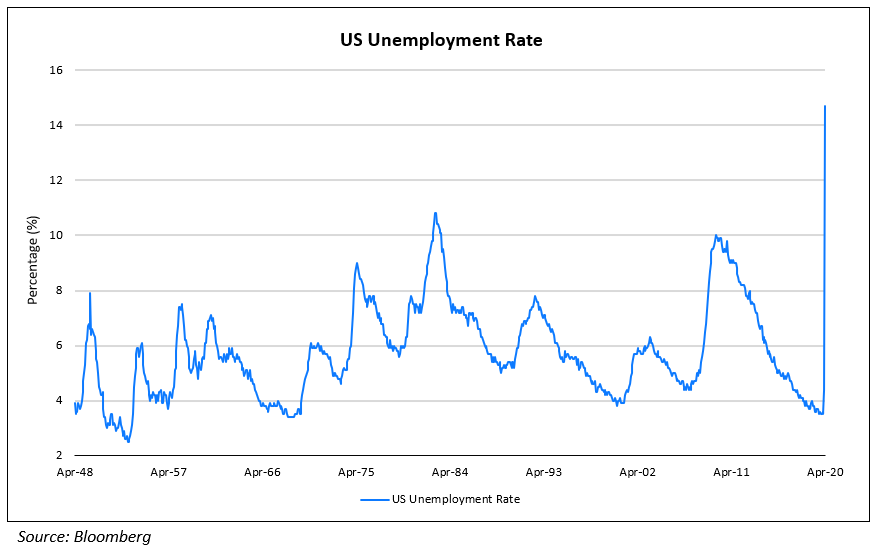 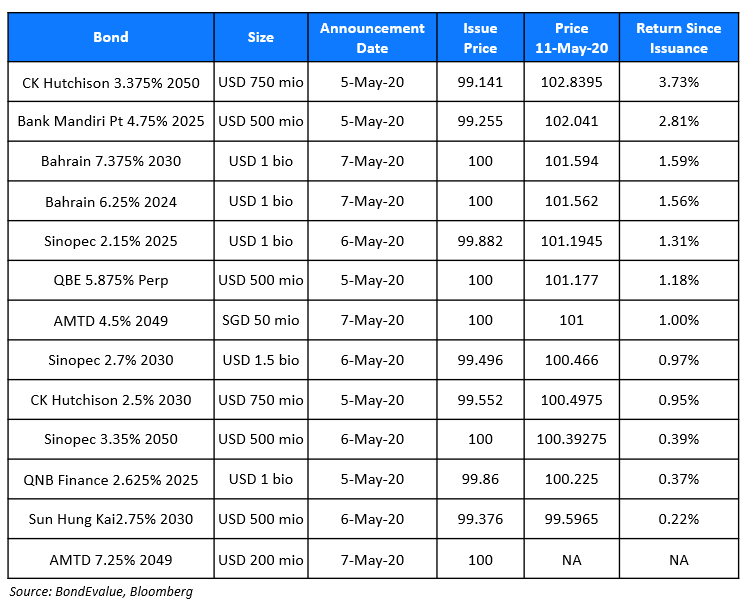 There has been a lot of news around debt monetization by various central banks around the world, causing some concern, even alarm that this will cause runaway inflation. Prof Raghuram Rajan has published a piece that explains debt monetization. While he uses India as an example, the theory remains applicable globally. Key highlights are shown below:

Indonesia is finalizing a $1bn financial bailout plan for its flag carrier to help it stave off a debt default after the coronavirus crisis forced the airline to ground most of its planes.The rescue plan includes a proposal to restructure PT Garuda Indonesia’s $500mn sukuk due next month and arrange new bridge loans of as much as $500mn to meet working capital requirements for three to six months, Deputy State-Owned Enterprises Minister Kartika Wirjoatmodjo said. Garuda’s $500mn notes due June 3 have tumbled to 44.3 cents on the dollar from 99.07 cents at the end of January as concerns mounted over the airline’s ability to repay the debt. Shares of Garuda rallied 36 per cent in the last three sessions, trimming losses this year to 51 per cent. Still, the decline is almost double the losses for the benchmark Jakarta Composite Index. Trump officials said that the unemployment rate could hit between 20%-25% in the next few months before starting to look better somewhere around September, two months before the US goes to vote.

United Airlines Cancels $2.25bn Bond Deal on the Back of Weak Demand

Amid the volatility experienced by airlines around the world, United Airlines (UA) abandoned its attempt to raise a debt of $2.25bn through a bond issue on Friday, May 8. The debt raising was announced just two days prior on Wednesday, May 6, with an aim to repay a bank loan availed in March this year. The collateral for the bond issue was 360 UA owned aircraft representing 40 percent of its fleet. The share price of UA has dropped by a huge 71% amounting to a drop of $15bn in its equity value from the start of this year. Earlier in the week, Warren Buffett had sold all his airlines stock including United, American, Delta and Southwest airlines worth more than $4bn indicating a changed strategy which added to the drop in the share prices of the airlines.

Due to the lockdown as a result of the pandemic, the passenger revenue has plunged to zero which led to a pre-tax loss of $2.1bn in the first quarter. This is crucial to the airlines as it already has a $23.3bn debt and has been losing $50mn per day from the first day of the second quarter. The company has already applied for a federal bailout package and is likely to trim its workforce hugely to compensate for the losses.

Delta had borrowed $5bn previously in April based on a collateral of routes and aircraft slots. Despite the US companies raising $500bn since late March and around $95bn in the past one week, United’s attempt to raise debt has suffered a blow. One reason for this could be the high cost of capital probably as some of the investors and analysts believe that the collateral offered by the United is much lower in value than the amount demanded. The interest required to get investors on board was about 10 percent which forced the airlines to reconsider its decision.

Franklin Templeton has become embroiled in a spat with India’s markets regulator SEBI in the latest twist in a fiasco that has trapped $3bn of investors’ money. The California-based asset management company on Friday publicly apologised to the Securities and Exchange Board of India (SEBI), weeks after it sparked alarm by freezing withdrawals from six of its debt mutual funds. On a recent earnings call, company president Ms Jennifer Johnson said that rules introduced by SEBI last year that limited dealing in unlisted debt effectively “orphaned one-third of our funds” in India by making it harder for them to trade in lower-rated bonds. In response, SEBI issued a statement that said “Some mutual fund schemes seem to have chosen to have high concentrations of high risk, unlisted, opaque, bespoke, structured debt securities with low credit ratings.” The regulator added that “Franklin Templeton should focus on returning the money of investors as soon as possible”. Analysts have said that process could take months or even years. Franklin Templeton’s India president Sanjay Sapre on Friday said that Ms Johnson’s comments had been taken out of context: “We deeply regret any unintended slight this may have caused to the esteemed offices of SEBI, whom we have always held in the highest regard and unconditionally apologise for the same.”

Gulf Banks Gear Up to Face Losses Due to the Pandemic

As if the shock of the ongoing Pandemic was not enough, the GCC banks have also been adversely affected by the decline in oil profits. In light of S&P predicting limited financial growth, and the dual shock, the GCC banks have the ability to absorb upto $36bn in losses.

Gulf Cooperation Council has 23 banks with assets worth $1.5tn at end-2019 and are considered among the most profitable in the world. The most resilient banks are the Saudi banks and the least resilient are the Bahraini banks to the economic shocks. Kuwaiti banks have the highest capacity to resist any increase in the cost of risk while the Bahrain, Oman and UAE banks are most exposed due to their high exposure to the real estate sector.

Trump Officials Warn Unemployment Rate Could Be Close to 20%

“The reported numbers are probably going to get worse before they get better,” Treasury Secretary Steve Mnuchin said on “Fox News Sunday.” He added, “I think you’re going to have a very, very bad second quarter.” Asked directly by host Chris Wallace whether the nation’s jobless rate was “close to 25 percent at this point, which is “Great Depression” neighborhood,” Mnuchin said, “Chris, we could be.” Meanwhile, Kevin Hassett, senior adviser to President Donald Trump, told CBS that by next month, a fifth of the workforce could be without jobs. That’s up from a jolting 14.7% unemployment rate reported Friday. Mnuchin noted that the current crisis – unlike the Great Depression – is not the result of a structural problem with the economy. “We closed down the economy,” the secretary said. It’s “no fault of American business, it is no fault of American workers, it is the fault of a virus.” 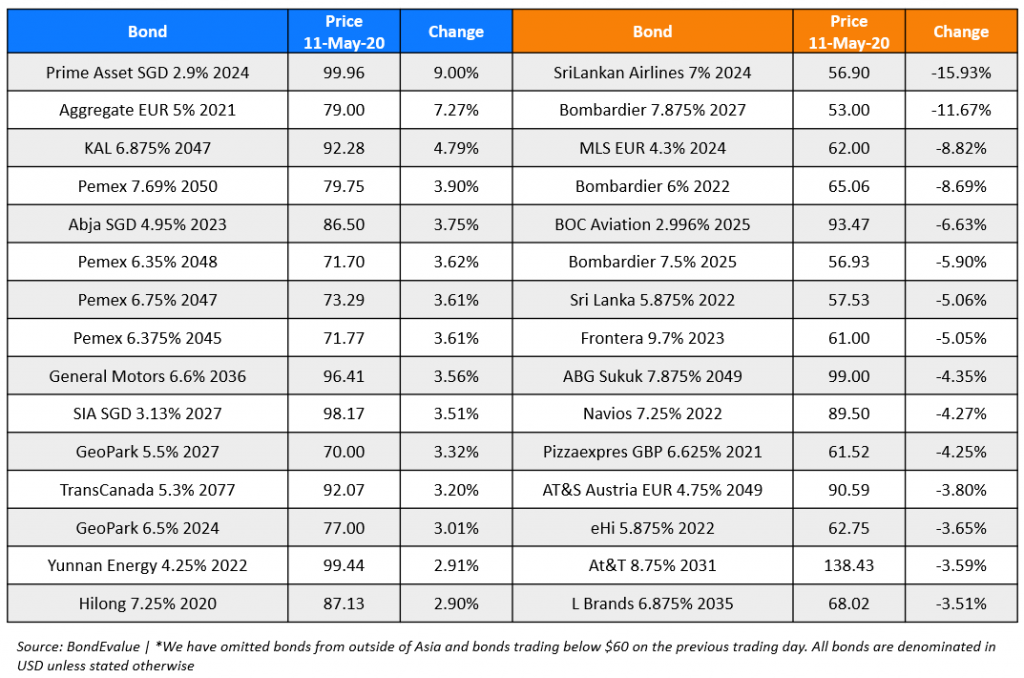