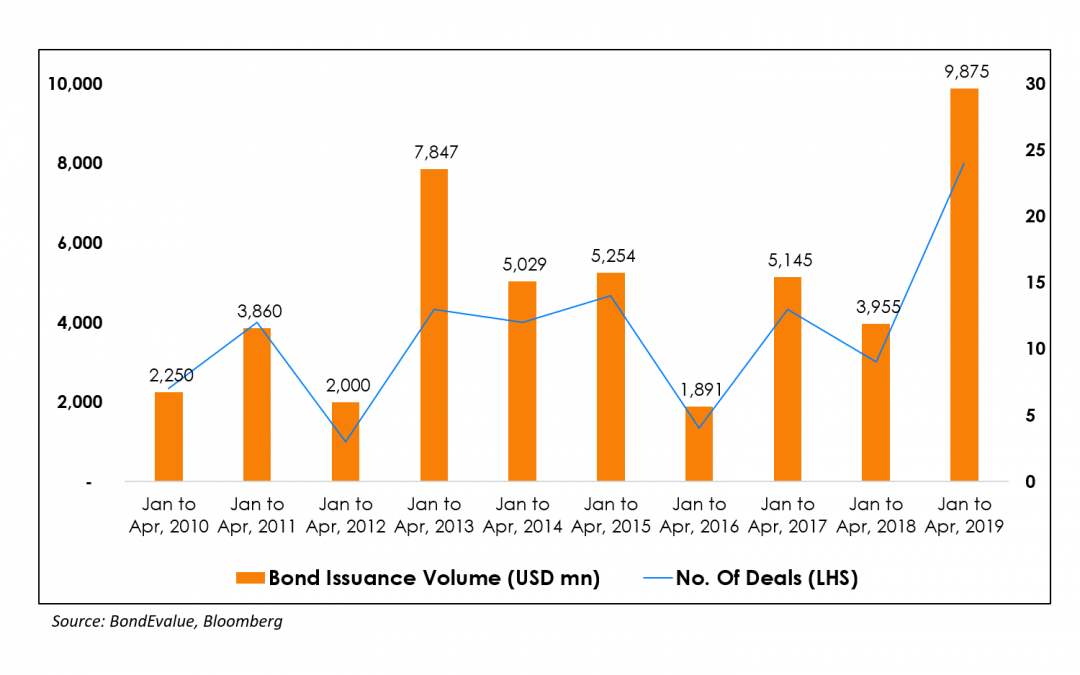 India Inc’s overseas dollar bond issuances have already surpassed last year’s total of $6.3 billion in just the first 4 months of 2019 with $9.9 billion raised by companies from a range of industries such as State Bank of India ($1.25 billion), Shriram Transport Finance ($900 million), Vedanta ($1 billion) and Indian Oil ($900 million).  This momentum is likely to continue for the rest of the year because domestic liquidity is still tight and the markets onshore are not deep enough, with issuance on course to exceed 2017’s record of $15.4 billion.

Easier overseas liquidity, benign dollar interest rates and a relatively stable global macroeconomy are some of the reasons Indian companies have chosen to to raise dollar funds from abroad instead of tapping the onshore debt markets.  In addition, the Reserve Bank of India’s (RBI) recently eased restrictions for new sectors, especially non-banking finance companies, to borrow via the overseas route, driving the supply of offshore issuance.  The RBI had eased ECB guidelines in January, allowing all entities eligible to receive foreign direct investment to borrow a minimum of $750 million per financial year under the framework without seeking permission from the regulator.

Some of the risks to Indian offshore issuance overtaking the levels of 2017 include the outcome of the local election, the results of which are due on May 23.  A hung verdict could raise uncertainty about the future of economic reforms in the country.  Also, many Indian companies have already raised money from abroad which increases the risk of oversupply.