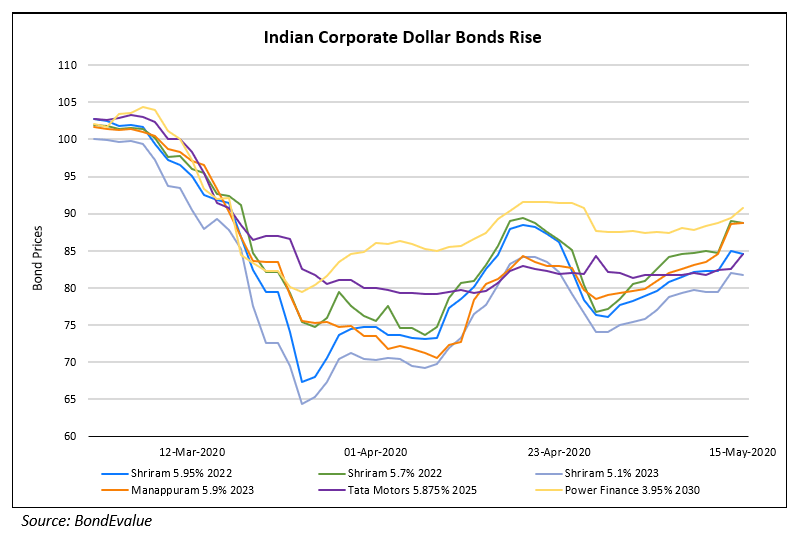 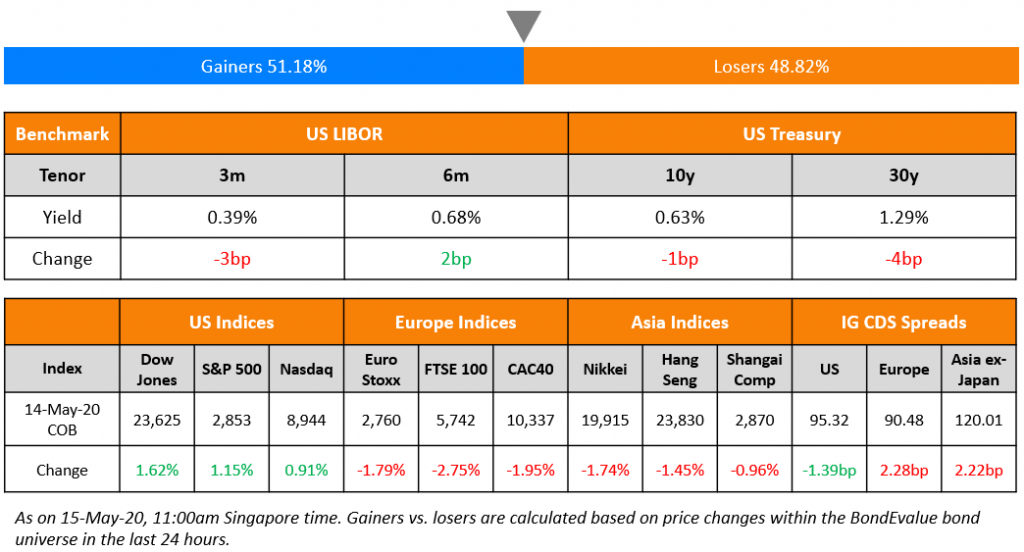 Wall Street saw a late rally yesterday as investors focused on the prospects of additional fiscal stimulus and a quicker than expected relaxation on lockdowns. News was mixed with President Trump threatening to cut ties with China, talks of a new stimulus bill and the Wisconsin Supreme Court ruling outlawing state governor’s lockdown orders. Almost 3mn Americans sought jobless benefits for the first time last week, bringing the total number of unemployment benefit applications to 36.6mn since the coronavirus pandemic hit the world’s largest economy. The rate of applications is slowing down and markets may be seeing this trend as positive. Asian markets are opening slightly higher following the overnight rally. European shares were down as they closed before the Wall Street rally. European CDS spreads widened while US CDS spreads tightened a tad bit. Asian CDS were mostly unchanged.

Asian Dollar Bond market saw the first high yield issue with Zhenro Properties pricing a $200mn bond at 8.35%. US high-grade bond issuance for the year steams towards $1tn, a mark that wasn’t hit until November in 2019. 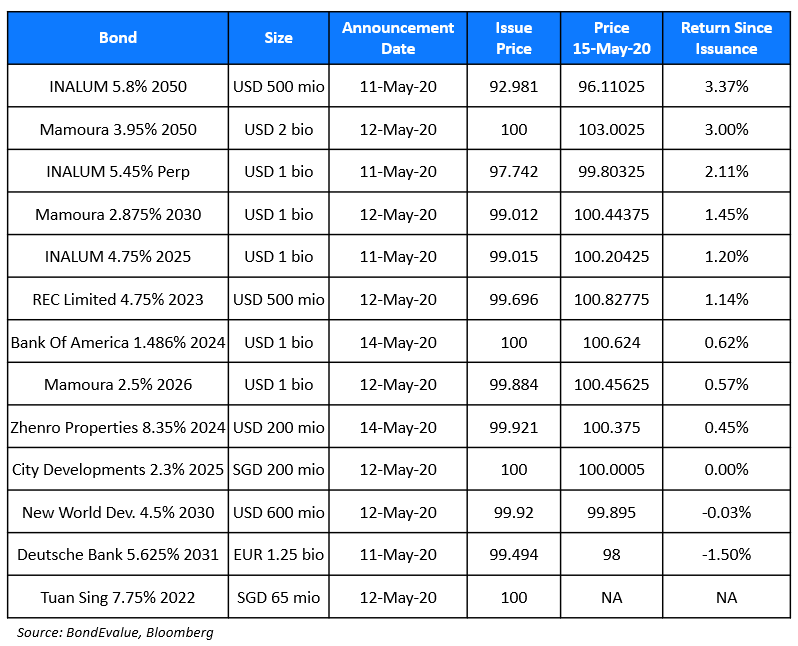 Indian USD bonds where among the top performing bonds in the BEV universe. The non bank lenders (NBFCs) led the pack with Shriram 2022s rising almost 5% to 88.75 and Manappuram’s 2023s up by 4% to a price of 89.71. They are currently trading well off their lows seen about a month ago. The Govt of India had announced a massive stimulus package with a focus on the NBFC sector.

Tata Motors USD 2025s were also up by about 2 points to yield around 10%. On the INR front, Tata Motors issued Rs 5 billion ($66mn) worth of bonds with a maturity of 3 years at 8.5%. The car maker’s INR bonds are rated AA- by CARE and ICRA. It is rare to see INR bonds yielding lower than USD bonds. Tata Motors has also resumed production in two of its factories while implementing social distancing norms.

Glenmark Pharmaceuticals’s bonds were up also up by 2.74% and the stock rose 2.85% amid a falling market on Thursday. Glenmark revealed that it had started phase 3 clinical trials in India for its generic antiviral drug called Favipiravir to treat mild to moderate CoVid-19 cases. The study is expected to complete by August this year. More than 10 leading hospitals in the country have been enrolled for the trials.

Vedanta’s dollar bonds which had posted massive gains earlier in the week, gave-up between 1.5% and 5% on Thursday. BEV had reported earlier that Vedanta promoter Anil Agarwal has launched a $2bn bid for a share buyback with an aim to take the company private.

Brazil’s President Jair Bolsonaro has been in the news lately for laying off ministers and pushing governors to open up the economy, even as it hit a daily record of 13,944 new coronavirus cases on Thursday. Fitch Ratings changed it outlook on Brazil to Negative with a BB- rating on May 5. The rating agency cited the “volatile relationship between the executive and congress” among factors for the outlook change. This has increased the perceived risk towards Brazilian assets, evident from the 30% devaluation in the Brazilian real this year. Brazil’s dollar bonds have not been spared having fallen between 5-10 points over the last month. 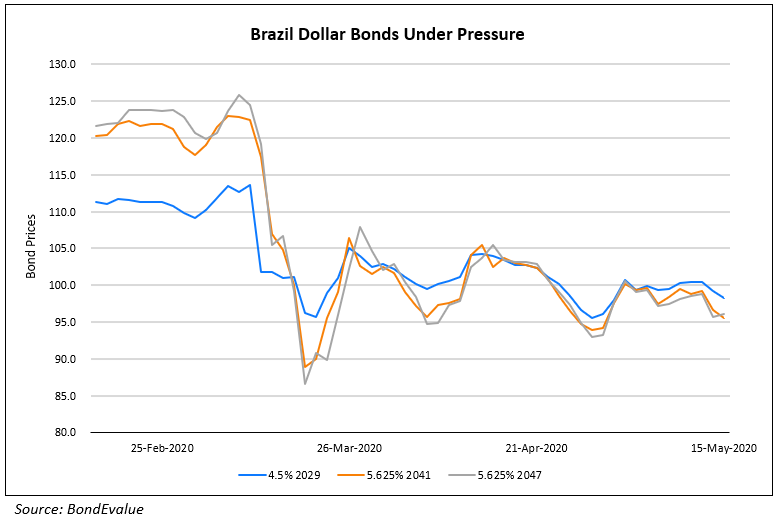 The much-anticipated corporate bond buying facility of the Fed bought little in its first two days of operations. The data showed its first-ever holdings of corporate bonds totaled just $305mn after the newest emergency facility launched by the central bank kicked off purchases on Tuesday. The Federal Reserve’s stash of bonds and other assets grew to nearly $7 trillion this week, but several of its programs are seeing falling demand from banks and investors. The Fed indicated that most purchases will be in funds that hold investment-grade debt, but it will dabble in junk bonds too. Direct purchases of corporate debt will follow. The program, which is managed by BlackRock, will take $75 billion in equity from the Treasury and leverage it 10-to-1, giving it up to $750 billion to play with.

For details about the Fed Reserve Balances, click here

A multi-trillion dollar wave of government debt sales has — so far — found seemingly endless support as nations around the world raise cash to fight the economic hit of the coronavirus. The U.S. sold a record amount of debt at auctions this week, a German long-dated offering drew the strongest demand since 2012, and the U.K.’s first-ever syndicated 10-year sale received seven times as many bids as needed. Meanwhile, Australia raised the equivalent of $12bn in its biggest-ever offering. The milestones share a common theme: Investors are mopping up the sales as long as central banks engage in so-called quantitative easing, buying an unlimited amount of debt to counter the ravages of the pandemic. But at the first whiff of a recovery, or a pullback from policy makers, all bets may be off. Throw in the threat of inflation amid a global fiscal splurge exceeding $8tn, and bond investors look set for a toxic cocktail of risks in the not-too-distant future. “Once there is an end to the crisis in sight, they (central banks) will be less and less willing to provide support and it will fall more on the street to absorb paper,” said Charles Diebel, a money manager at Mediolanum SpA, who’s adding steepeners in anticipation. Still, that eventuality looks a way off, he said. “For now, the central banks will take all the supply and more.”

Bank of America Corp tapped the primary bond markets with a $1bn 4Y fix-to-floating bond, issued to finance the healthcare industry amid the pandemic. According to the SEC filing, the proceeds will be used to fund clients “whom we reasonably believe to be or to have been involved in activities in response to the COVID-19 pandemic, and who are in one of the following subsectors of the healthcare industry: (i) Not for Profit Hospitals; (ii) Skilled Nursing Facilities; (iii) Healthcare Equipment; or (iv) Healthcare Supplies.” The bonds, rated A-/A2/A+, were priced to yield 1.486%, 130bp over Treasuries and 15bp inside initial guidance of 145bp over Treasuries.

United Airlines had received a bailout package of $5bn from the federal government according to a company announcement on April 15 this year. According to the company spokesperson Frank Benenati a part of the funds were meant to cover a portion of employee pay and benefit costs through Sep 30. However, a lawsuit filed by Kenneth England who is a shift manager at O’Hare International Airport at Chicago alleges that the airlines has breached the terms of the funding as it had told the employees to take 20 unpaid days off between May 16 and Sep 30. The agreement with the government as per England stated that “it would not require any employee to take a temporary suspension or unpaid leave for any reason, it would not reduce the pay rate of any employee”. The beleaguered airlines termed the lawsuit “without merit” as the company continued to employ 100 percent of its workforce. The airline’s 4.875% bonds due 2025 fell 7.6 points to trade at 50.3 cents on the dollar while its 5% bonds due 2024 fell 3.5 points to trade at 53.3 cents on the dollar.

HNA Group at Risk of Losing Swissport to Distressed Funds

Debt laded Chinese conglomerate HNA Group faces the risk of having its stake in Swiss airport services group Swissport International wiped out as distressed funds load up on Swissport’s debt. Apollo Global, SVP Global and Cross Ocean Partners have bought majority stakes in Swissport’s senior secured bonds, term loans and revolvers, putting them at the forefront of the company’s debt restructuring, which typically results in a dilution of existing equity shareholders. HNA’s stake stands to be wiped out as it faces severe liquidity issues itself, which means it is unlikely to fund Swissport. HNA bought Swissport for $2.8bn in 2015. HNA’s bonds were largely unchanged.

Asia’s “economic disruption is going to be easier to fix, getting people back to work is going to be easier,” said Paul McNamara, a money manager at GAM Investments in London. “We’re quite positive on Asia just because we don’t think the world’s really realized just how much better Asia has done through this.”

“Given the massive central bank easing, which includes a lot of bond-buying QE in many places, there will be a lot of demand right now to buy government bonds,” said Eric Stein, co-director of global income at Eaton Vance Management. “However, if it was a year or two from now and the economy was picking up and inflation had started to pick up, the story could be different.”

Edward Altman of NYU Stern Business School reckons that about 8% of all firms whose debt is rated speculative grade (about 1,900 in all) will default in the next 12 months. This figure could reach 20% over two years. He expects at least 165 large firms, those with more than $100m in liabilities, to go bankrupt by the end of 2020. 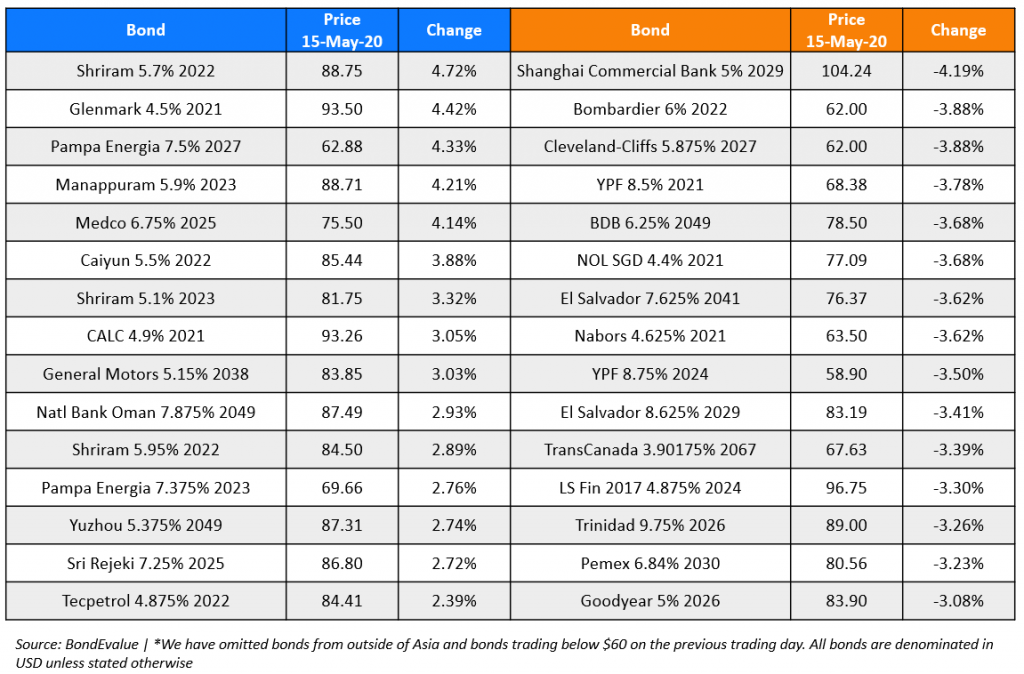