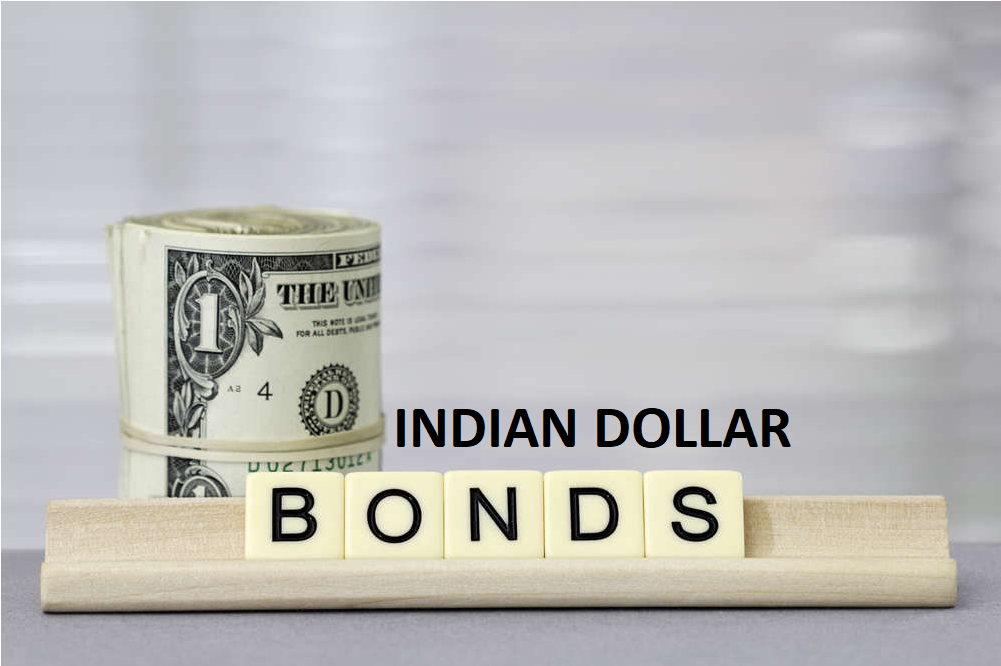 Indian corporates have taken the international bond markets by storm this year thus far, with total dollar bond issuance volume at $10.7bn, up almost 70% from the same period last year. This increased supply of Indian dollar credit is on the back of favorable market conditions globally in the form of ultra-low yields, continued monetary and fiscal stimulus and tightening credit spreads. This has played out well particularly for emerging markets, India included, where funds from developed markets are finding their way to the greener pastures of Asia in pursuit of yield.

In this piece, we start by taking a look at the macro environment in the bond markets and then dive into dollar bond issuance from Indian corporates, highlighting some of the noteworthy deals.

With wild swings in US Treasuries where 10Y yields went up 40bp last month, Indian issuers stayed firm with their issuances in these markets. Overall, Credit default swap (CDS) spreads for Asia ex-Japan, measured by the iTraxx Asia ex-Japan 5Y CDS Index, recently touched 58bp, down 120bp from the peak of the pandemic fears in March last year and just marginally above all-time lows. These favourable market conditions for issuers across Asia have led them to tap the primary markets to raise capital via bond issuances. 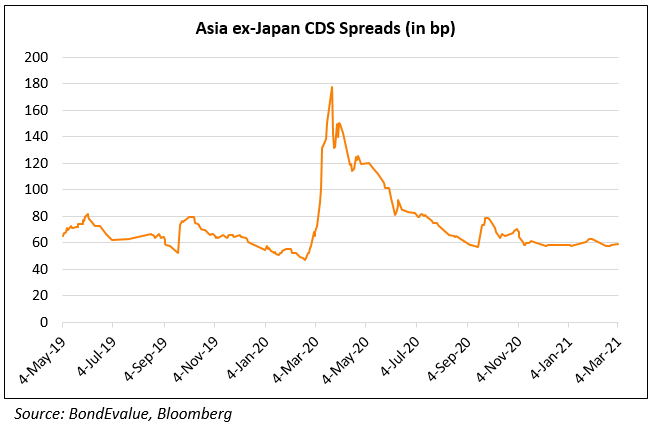 While issuance started off strong at the beginning of last year too, the numbers dipped in the immediate aftermath of the pandemic. For the quarter ending June 2020, there were only two dollar issuers REC Ltd and UPL Ltd for a combined $1bn, the lowest in two years. Besides, in the same month, Moody’s downgraded the sovereign by a notch to Baa3 (negative) while Fitch revised the outlook to negative, keeping the rating unchanged at BBB-. Issuers caught up over the next few months and India ended 2020 with $13.4bn in issuances as compared to $21.3bn in 2019.

Bond issuances from Indian issuers this year are expected to rise even further with many issuers in the pipeline mentioned later. Below is a list of dollar bond deals this year, sorted by issue size. 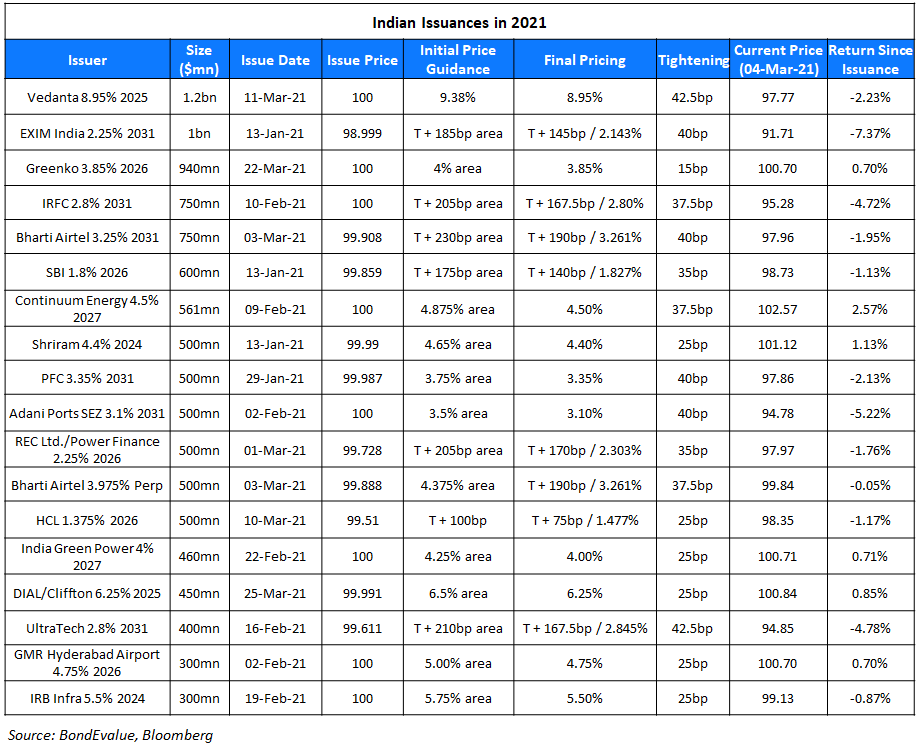 As can be observed, with the latest sell-off in US benchmark Treasuries, most bonds are trading in the red while ESG issuances of Continuum Energy, Shriram and India Green are in the green.

The most recent issue was by Greenko Energy Holdings which priced India’s largest green bond and also the nation’s lowest HY coupon. It raised $940mn via a 5NC2 amortizer at par to yield 3.85%. A few days before Greenko’s issuance was Cliffton/Delhi International Airport’s (DIAL) $450mn 4Y7M bond to pay up for an orphan SPV structure.

HCL Tech came to markets earlier this month and was priced as both, India’s highest rated and tightest dollar bond offering ever at a yield of 1.477%. The debut bonds were rated A- and carry a coupon of 1.375%. Orders peaked at $1.7bn but later fell to $850mn with US taking 45%, Asia 39% and EMEA 16%. In terms of investor type, asset managers took 83%, SSAs and insurers 14% and banks, private banks and others 3%.

Prior to HCL’s issuance, prominent issuer Vedanta brought the largest single deal from the region raising $1.2bn via a 5Y bond at 8.95%, marking the highest issuance yield from the region. Also recently, Bharti Airtel raised $1.25bn via a two part offering – $750mn via a 10.25Y senior bond at a yield of 3.261% and $500mn via a subordinated PerpNC5.25Y at a yield of 4%. The perps have five-year resettable coupons starting from 5.25 years. If the Perps are not called in June 2031, i.e., 10.25 years, the coupon will reset to the initial 339bp spread over 5Y Treasuries with a step-up of 25bp, and a further 75bp after 25.25 years. The terms of the Perps allow Bharti Airtel to indefinitely defer coupon payments subject to restrictions on shareholder distributions and therefore the perps were rated two notches below the issuer rating to reflect subordination risks and voluntary coupon deferability.

Shriram Transport Finance, a regular issuer over the last three years came up with a social bond issuance, a first from the nation. They raised $500mn 3.15Y social bond at par to yield 4.4%. Last year, the company raised a similar amount via a 3Y bond at par to yield 5.1%. The 70bp reduction in their cost of debt was explicitly seen through their z-spreads at issuance. The latest 4.4% 2024’s z-spread at issuance was at 349.3bp vs. 408.5bp for the 5.1% 2023s issued last year, a difference of ~60bp indicating that credit and liquidity conditions have been significantly better this year.

Besides the regulars – EXIM, PFC, Bharti – this year also saw noteworthy debut dollar deals from UltraTech Cement and IRB Infrastructure Developers. UltraTech, India’s largest cement manufacturer, raised $400mn via a 10Y sustainability-linked bond (SLB) at a yield of 2.845%, its debut dollar bond issuance. This also marked India’s first SLB deal and was received with orders 5x issue size despite a 42.5bp tightening. The Aditya Birla Group-owned company’s bonds carry a coupon step-up of 75bp if the company misses its sustainability target, which is linked to the amount of carbon dioxide it produces. IRB on the other hand raised $300mn via a 3.5NC2 bond at 5.5% thereby printing India’s first offshore bond from the toll-road sector.

“We expect supply from India to hit US$3.5bn in the next couple of months as spreads have tightened massively in the offshore markets,” said a DCM banker from a foreign bank. JSW Steel and Delhi International Airport are in talks with banks for potential dollar bond offerings as per market sources and HCL Tech has announced its dollar bond offering. JSW Steel has already gotten its board’s approval to raise up to $1bn in Dollar bond markets. Low yields in offshore markets and tightening spreads have made dollar funding relatively more attractive to issuers who can access these markets. DCM bankers also say that the key themes of the offerings this year from India will be focused on renewables, non-banking financial companies and projects where operational assets are already in place. Ultratech, Continuum Energy, ReNew Power have already set examples of that.

Why are Indian Issuers Coming To The Dollar Bond Markets

Despite the Reserve Bank of India’s (RBI) mentioning that their stance will be accommodative and liquidity will continue to be in place, market participants see the RBI’s policies as a constrain on liquidity. 10Y Indian government bond yields are still near the lows, currently around 6.15% but, yields on 5Y and 3Y domestic AA bonds surged 25bp and 50bp respectively in January. This was after the RBI announced a higher cut-off yield at 3.55% for its INR 2tn ($27.4bn) variable rate reverse operation in mid-January. This was meant to absorb excess liquidity from the system, as the cut-off yield was higher than market expectations of 3.4%, according to Refinitiv. Some market participants expect these moves to drain surplus liquidity and slowly push onshore yields higher which could make tapping offshore bond markets attractive and cheaper to issuers who can access them.

With relatively loose financial conditions and if global liquidity stays abundant, there is a possibility that India could set a historical issuance record surpassing 2019’s $21.3bn this year!