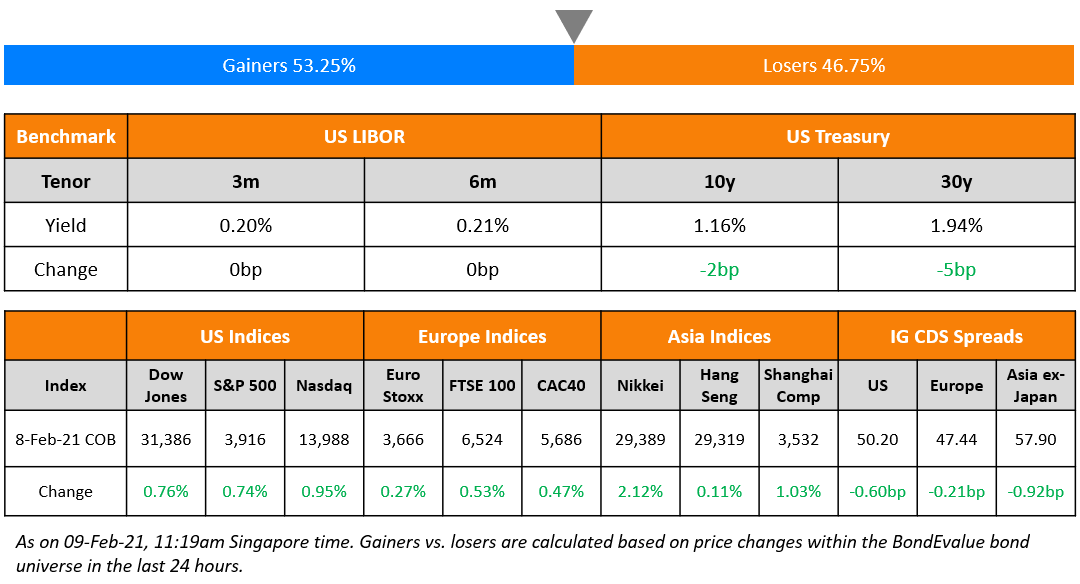 US equities continued the positive momentum with the S&P and Nasdaq up 0.8% and 1% respectively. Energy sector led the gains, up 4.2% followed by financials up 1.2%. House Speaker Nancy Pelosi suggested that the relief bill will pass through Congress within weeks. US 10Y Treasury yields were 2bp lower. The positive risk sentiment also showed in oil prices with Brent nearing $60/bbl. Europe’s FTSE and CAC were up ~0.5% while FTSEMIB saw yet another boost rallying 1.5%. Asian dollar bond issuances have softened this week with limited Chinese issuers tapping bond markets ahead of the Lunar New Year holidays, beginning this Friday. US IG CDS spreads were 0.6bp tighter and HY was 2.2bp tighter. EU main CDS spreads tightened 0.2bp while crossover spreads widened 1.8bp. Asia ex-Japan CDS spreads are 0.9bp tighter while Asian equities are ~0.5% higher today. 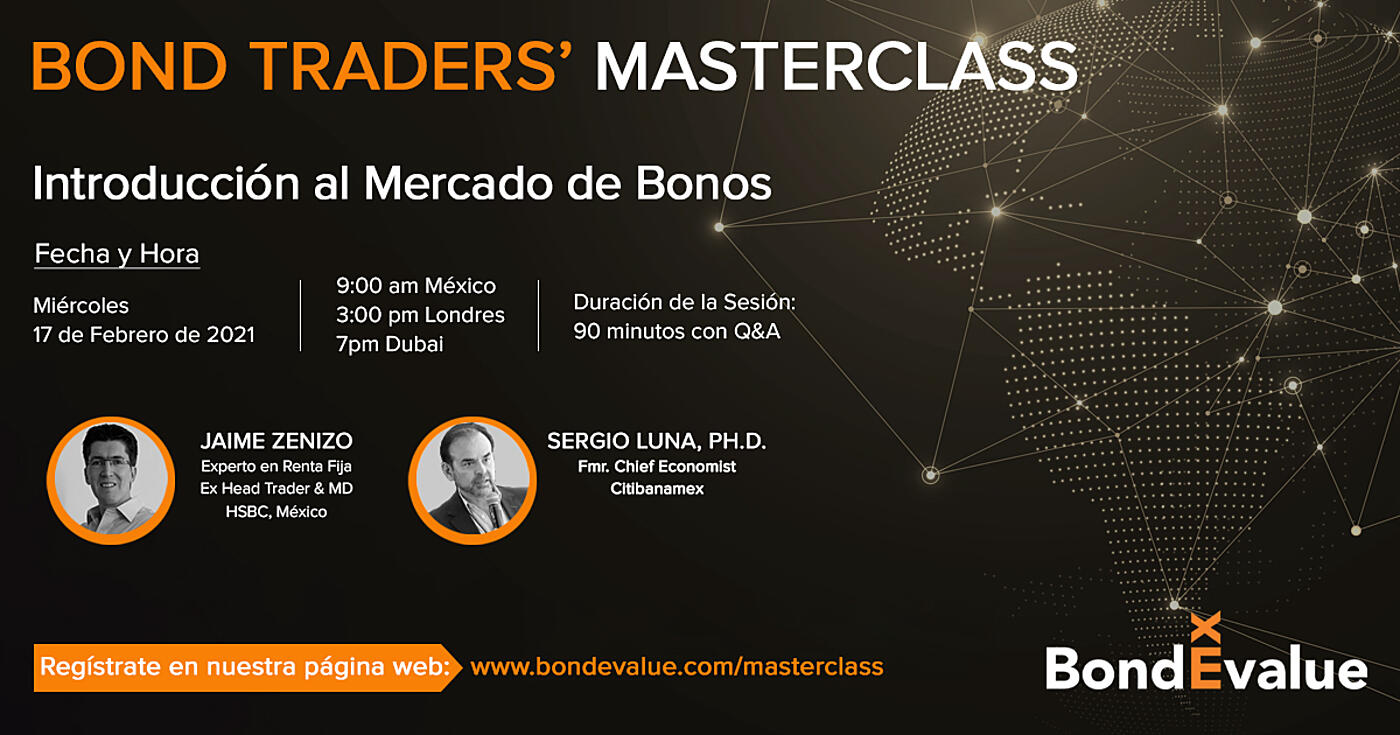 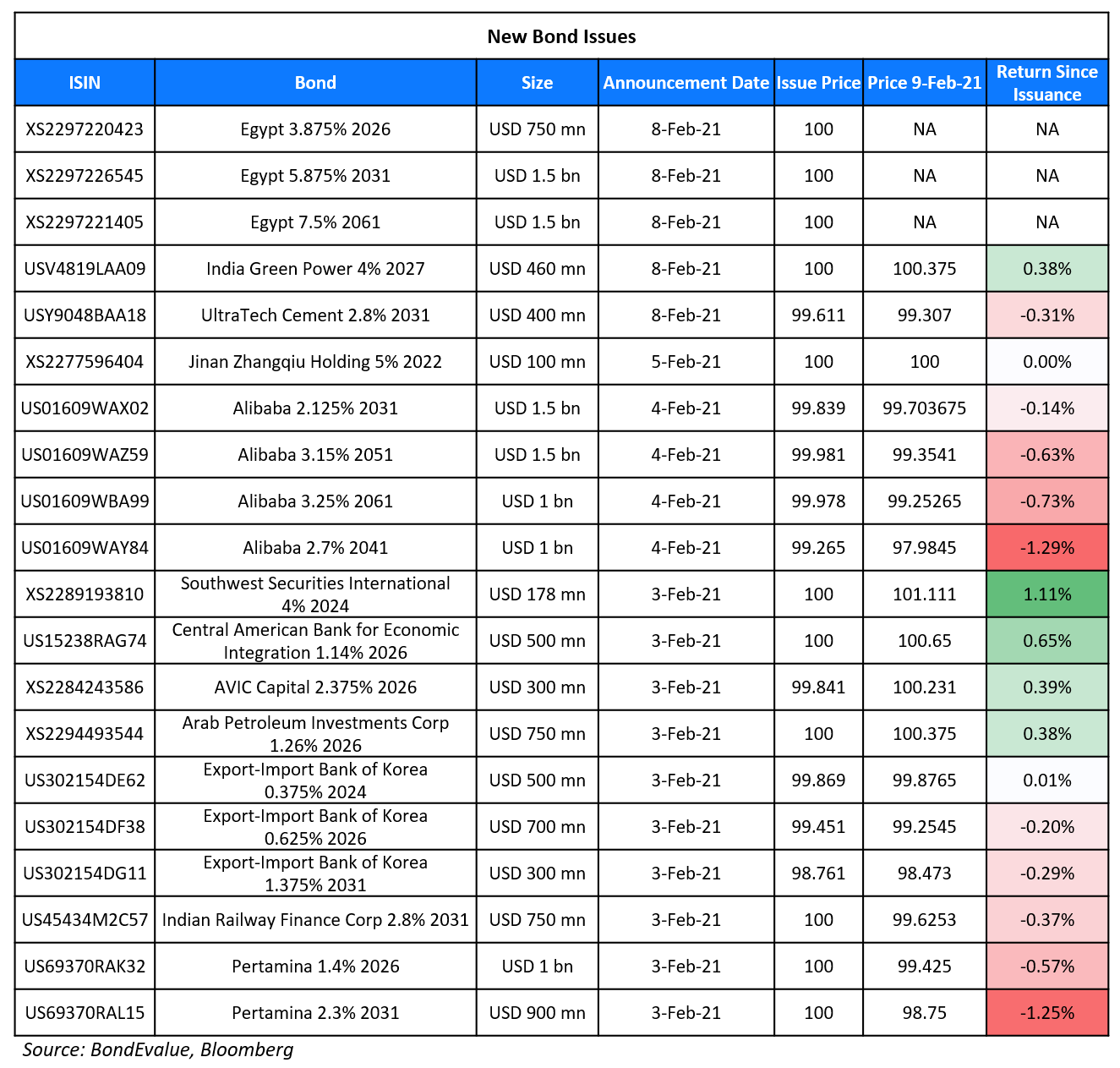 India’s largest cement producer, UltraTech Cement raised $400mn via a 10Y sustainability-linked bond (SLB) at a yield of 2.845%, or T+167.5bp, 42.5bp inside initial guidance of T+210bp area. The company’s debut dollar bonds have expected investment grade ratings of Baa3/BBB- and received orders over $2bn, 5x issue size. The bonds carry a coupon step-up of 75bp if the company misses its sustainability target, which is linked to the amount of carbon dioxide it produces. The Aditya Birla Group-owned company plans to use proceeds from the dollar bond to refinance existing rupee debt and for general corporate purposes. This would also be India’s first SLB with JP Morgan being the structuring agent.

India Green Power/ReNew Power raised $460mn via a 6Y non-call 3Y (6NC3) green amortizing bond at a yield of 4%, 25bp inside initial guidance of 4.25% area. The bonds have expected ratings of Ba3/BB- and received orders over $1.6bn, 3.5x issue size. Asia bought 47%, EMEA 35% and Americas 18%. Fund managers took 93%, insurers and agencies 5%, banks 1% and private banks and others 1%. Proceeds will principally be used to subscribe to a senior secured rupee-denominated bond issued by seven subsidiaries of ReNew Power Private. The amortizing notes have a weighted average life of ~5.6 years and the offering has been certified as ‘green bonds’ by the Climate Bonds Initiative and verified by KPMG. “The green angle helped during the pricing of the offering that paid negligible new issue concession with investor support from various regions,” said a banker on the deal.

The Bermuda Scheme is a court-approved compromise/arrangement between a company and its creditors to implement financial restructuring, group restructuring and even mergers or take-private. Any company incorporated in Bermuda, including companies which have operations overseas and are listed on an overseas stock exchange can use the scheme. The voting requirement of the scheme requires at least 50% in number representing 75% in value of those voting in each class to approve the proposed scheme.

GCL New Energy yesterday was given the nod to restructure their bonds under the Bermuda scheme where bondholders will receive $950 worth of new 3Y bonds paying a higher coupon of 10%, as well as $50 in cash plus accrued interest, for every $1,000 in principal. The company will redeem at least 15% of the bonds by January 30, 2022, and at least 35% in 2023 and shall make an offer to buyback the bonds below par if annual renewable energy subsidies exceed $200mn, or if it sells any of its solar power plants. Further, if the company succeeds in selling its power plants, then it must redeem bonds. If the sale proceeds are over $400mn, it must redeem bonds worth 15% of the proceeds over $400mn and if the sales proceeds are more than $800mn then it must use 65% of the amount above $800mn to redeem the bonds.

“We’re going to be accommodative for a very long time because the economy just needs it to get back on its feet,” Mester said. “We want them to make sure the game being played is a fair game,” Mester said.

“Interest rates are very very low, much lower than in my lifetime, and I was born into the Depression,” Fuss said. Bond investors should keep their powder dry given the risk of faster inflation, he said, adding “there’s no outstanding value in the fixed income markets.”

On traders not yet concerned about the negative impact of price rises – according to JPMorgan Chase & Co analysts, led by Mixo Das

“A high/positive correlation shows markets are either driven by inflation concerns or changes in policy reaction,” Das wrote. “For instance if inflation was high and rising, bond yields would rise and equities would fall on expectations of tighter policy.” ”If the correlation sustains positive, it will be quite negative for markets,” Das wrote. “Much more so for bonds, but also for equities as leverage levels will need to come down.”

“Corporate debt is probably [China’s] biggest risk,” said Raiser. “One reason is because [SOEs] are not only highly leveraged, but tend to be less profitable than private firms.”

Emre Tiftik, director of sustainability research at the Institute of International Finance

“The pandemic has slowed the deleveraging process,” he said. “Defaults slowed sharply in quarter two and three 2020 amid much-needed forbearance policies that gave corporates breathing room.”

“China will probably have to live with a higher debt ratio for a long time,” Herrero said. “In other words, high debt will be a bigger concern for the Chinese economy than it was prior to the pandemic.”

“Policy makers are walking this tightrope between trying to help support the economy and not aggravate public debt risks,” said Sanghani. “In an ideal world, Colombia would be able to do more and offer more support to the economy.”

“You have a country like the U.S. that has ample fiscal space that can provide relief to the economy,” he said. “At the other extreme, we have low-income countries that basically had to tackle the emergency of Covid-19 by changing the composition of public spending.” 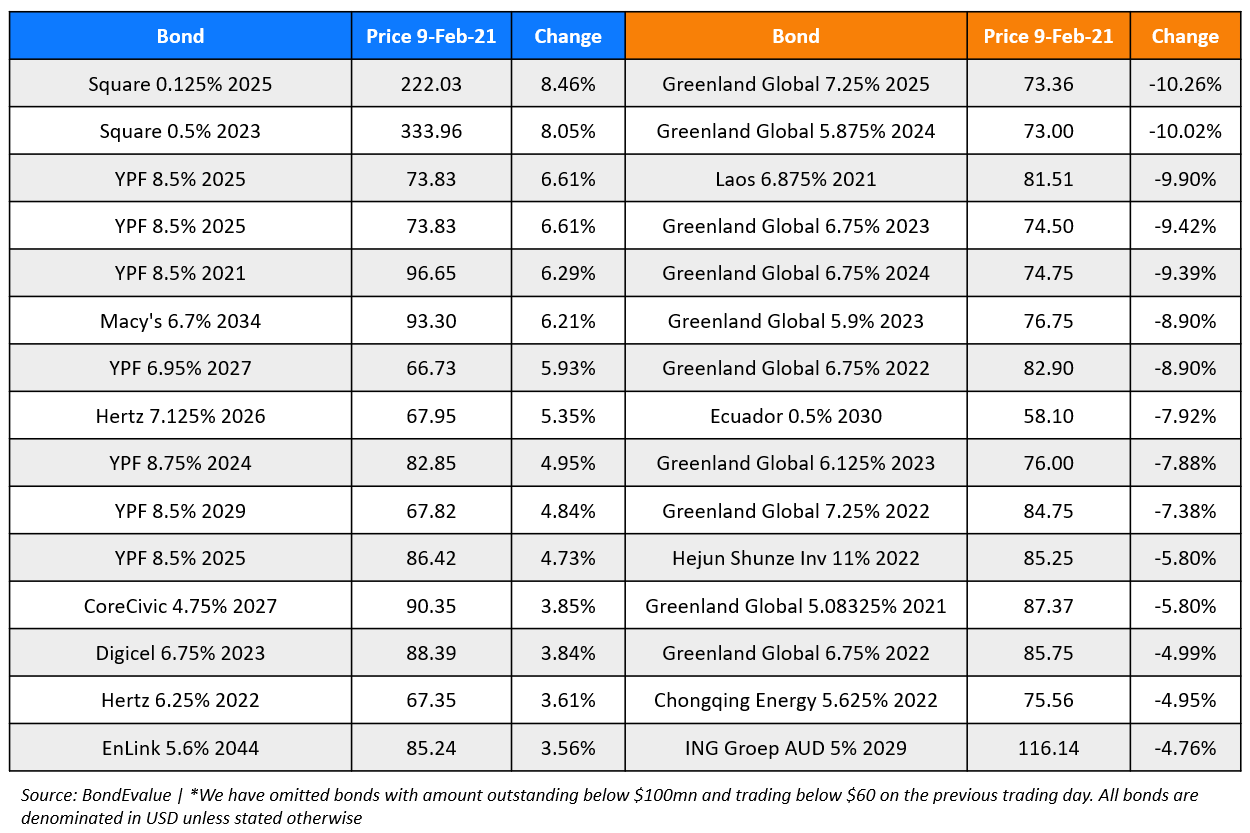