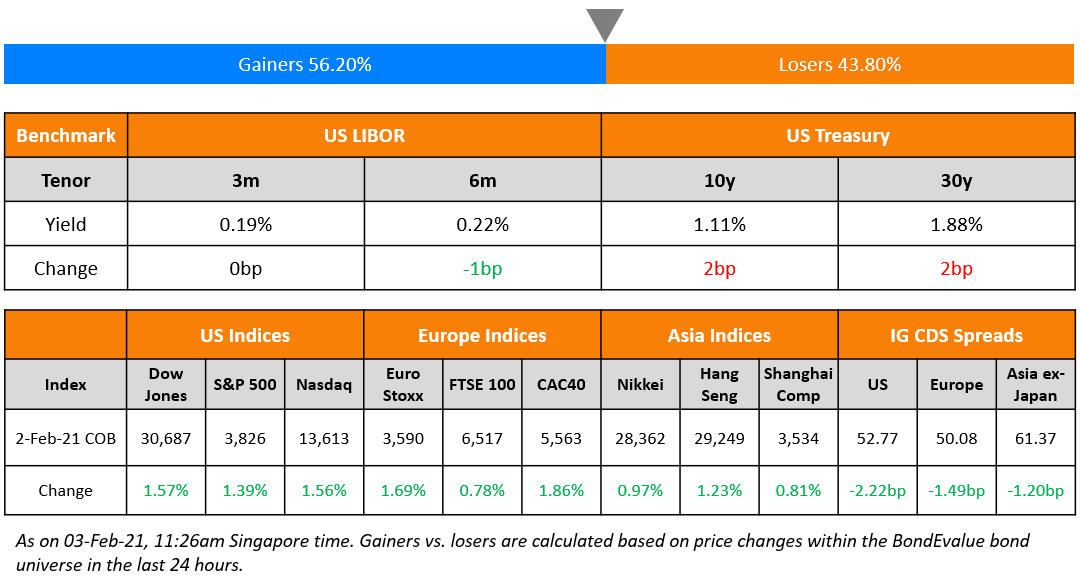 S&P and Nasdaq continued to climb higher, up 1.4% and 1.6% respectively. All sectors were in the green with financials and industrials rallying the most, up over 2% higher while the FAANGs continued to trade higher. According to CNN, US Senate Democrats have reportedly said that President Biden did not discuss lowering the $1.9tn size on the Covid relief package during a virtual meeting. US 10Y Treasury yields firmed 2bp. FTSE was up 0.8%, though it underperformed European indices with reports of the new Covid variant reducing vaccine efficacy while DAX and CAC were 1.6% and 1.9% higher. US IG CDS spreads were 2.2bp tighter and HY was 10.6bp tighter. EU main CDS spreads tightened 1.5bp and crossover spreads tightened 9.6bp. Asia ex-Japan CDS spreads are 1.2bp tighter while Asian equities are ~0.2% higher today. 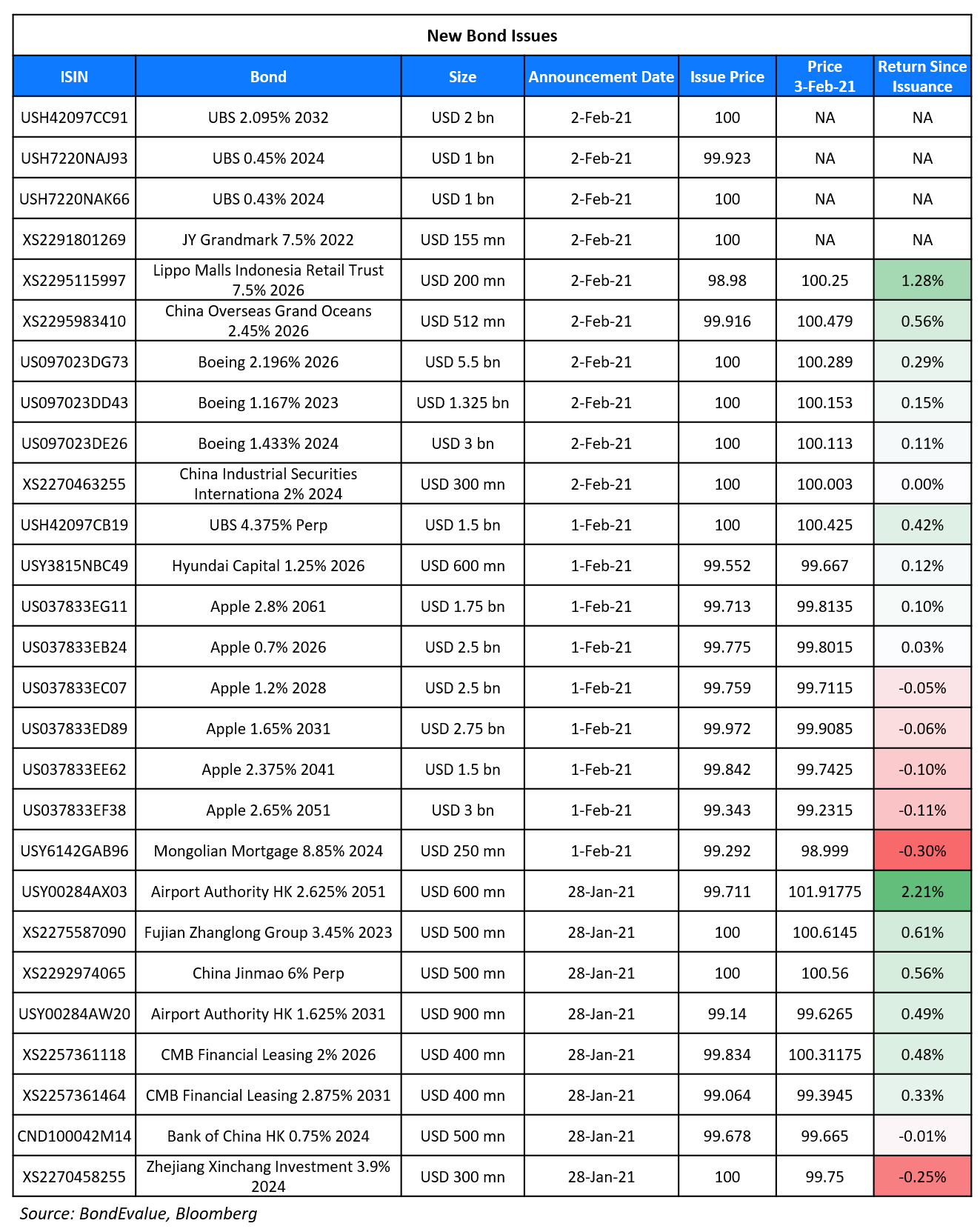 LMIRT raised $200mn via a 5NC3 bond at a yield of 7.75%, 37.5bp inside initial guidance of 8.125% area. The bonds have expected ratings of B1/BB-, and received orders of over $1.1bn, 5.5x issue size. Asia took 89% and Europe 11%. Fund managers and pension funds booked 97%, and private banks and corporates 3%. Proceeds will be used to help refinance LMIRT’s S$175m ($132m) loan facilities due in August 2021, for working capital and for issuance expenses. LMIRT Capital will issue the bonds with a guarantee from Perpetual (Asia) Limited as trustee of LMIRT.

China Overseas Grand Oceans raised $512mn via a 5Y bond at a yield of 2.468%, or T+202.5bp, 47.5bp inside initial guidance of T+250bp area. The bonds have expected ratings of Baa2/BBB, and received orders over $4.6bn, ~9x issue size. Asia took 95% of the bonds and EMEA 5%. Fund managers bought 47%, banks and financial institutions 45%, insurers 2%, sovereigns 1%, and private banks and others 5%. Proceeds will be used to repay and/or refinance debt, and for general corporate purposes. The bonds will be issued by wholly owned subsidiary China Overseas Grand Oceans Finance IV (Cayman) and guaranteed by the parent.

JY Grandmark raised $137.5mn via a 364-day at a yield of 7.5%, 25bp inside initial guidance of 7.75% area. The bonds were unrated. Proceeds will be used to acquire or develop property projects, refinance debt and for general corporate purposes. The new bonds were issued alongside an exchange offer for its $150mn 7.5% 2021s due in March where holders will receive new 364-day notes on a par-to-par basis with a minimum yield of 7.5%, plus accrued interest for each $1,000 in principal.

An RFP is a document soliciting a proposal with the help of advisories that help with fundraising. RFPs are issued for different purposes and can range from bond issuances to other project related proposals typically done through a bidding process. The process begins with drafting the proposal, then a review by bidders, implementation of feedback post which the final request for proposal is sent. With regard to bonds, some of the tasks performed by the advisory entail assisting the issuer in structuring the bond issuance, determining the best type of financing vehicle, planning the bond sale etc.

Indian state-owned infrastructure finance company REC has sent a request for proposals to banks to issue a US dollar bond in Reg S/144A format, according to a source.

“I don’t see anything right now systemic,” Kaplan said. “Some of the current situation you are seeing – one of the factors – is there is a lot of liquidity, and some of that relates to Fed purchases of $80 billion of Treasuries and $40 billion of mortgage-backed securities every month: I think it’s wise for us to acknowledge that.” “I still think we need to be doing what we are doing right now, in the teeth of the pandemic, but again, I think if we go beyond it, it will be healthier to start limiting this liquidity and normalizing policy down the road,” Kaplan said.

Redmond Ramsdale, head of Middle East bank ratings at Fitch
“We expect demand from investors for regional AT1 securities to remain strong.”

“Investors in the AT1 sukuk have opted for an inefficient risk-return payoff — a lower yield at the same risk,” he said.

“The issue size was overstretched for a debut AT1 deal, not only for NCB, but for the first such a sale in public market from Saudi Arabia,” according to Doshi.

“We are in an interesting moment when it comes to central banks straddling the fine line between [foreign exchange] intervention and [foreign exchange] manipulation,” said Ruskin. “While each of the [central banks] has different motivations, they do appear to be deftly dancing around possible censure from the US. This is a slippery slope,” he added. “The question you have to ask yourself is: would central banks be acting this way if the exchange rate was going the other way? I think not,” Mr Ruskin said. “What we are seeing is only the opening gambit of central banks responding to a weaker dollar environment,” Mr Ruskin said.

Heidi Elmer, head of the Swedish central bank (Riksbank) market department
“This is not currency intervention and we have been clear that this is not intended to have a monetary policy impact,” Elmer said. “Our objective is to ensure that we have appropriately financed currency reserves.”

Ed Al-Hussainy, a senior currencies and rates analyst at Columbia Threadneedle
“I see an environment in which currency intervention is becoming a more important tool for macro management,” said Al-Hussainy. “That may be a polite way of saying that currency wars are more likely,” he added.

Wood says Reddit traders are “aiding and abetting the bond bubble.” “I believe bonds are in a bubble,” she said. “I believe what just happened with GameStop and AMC (AMC) and American Airlines (AAL) and Bed Bath & Beyond (BBBY) — all of those — is exacerbating the bond bubble. Because you’re bailing those bondholders out, so they can put money elsewhere.”

According to a central bank adviser

“President Xi wanted the industry to be regulated. Guo [chairman of the China Banking and Insurance Regulatory Commission] helped put the leader’s thoughts into practice.” “Xi, Liu and Guo share a belief that the weaknesses of market economy can be addressed through strong regulation,” the adviser said.

“Liu He is so powerful,” said Chen. “I don’t think any single person will inherit all of his portfolios.”

“It is part of CSRC’s mandate to expand China’s influence in the global capital markets,” said Collier. “That’s a very different mandate from CBIRC or PBoC.” 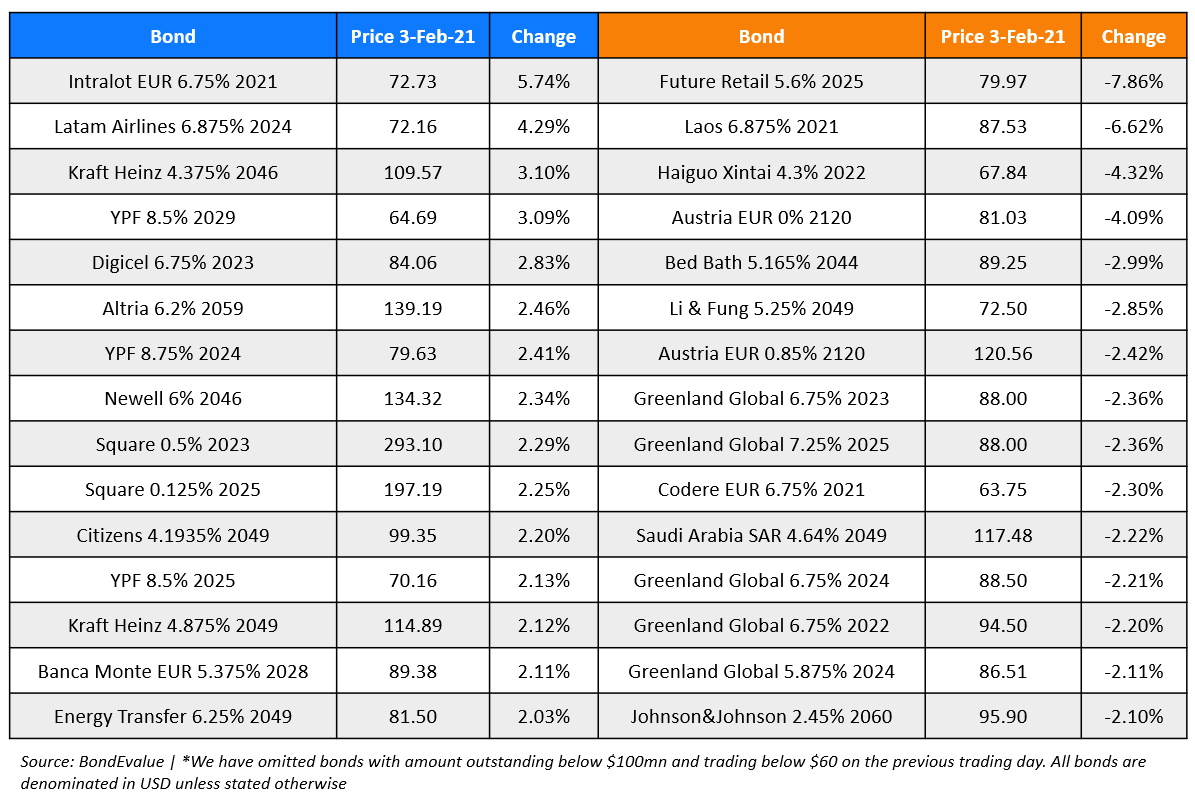