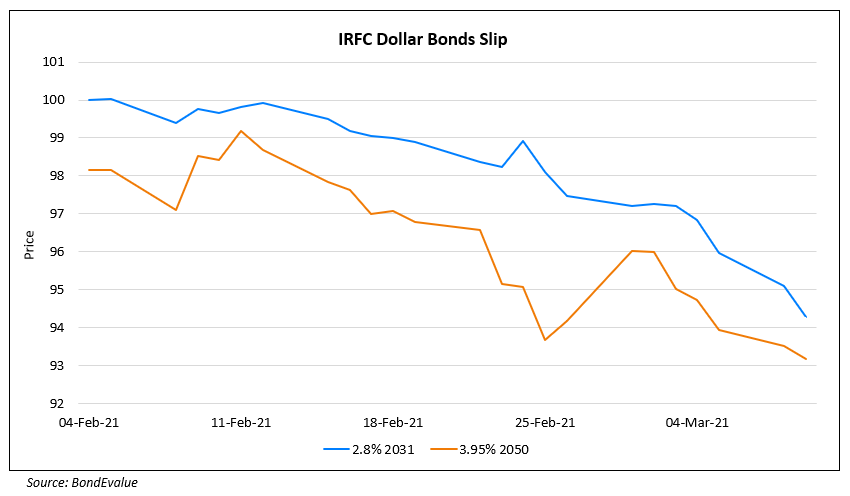 Indian state-owned corporate Indian Railway Finance Corp (IRFC) announced last night that it will be postponing its proposed dollar 5Y/10.5Y bond issuance. As per IFR, the management decided to postpone the issuance on subdued interest from investors and said that it would monitor the dollar bond markets for opportunities in the future. This came in at about 9pm Singapore time on Monday after releasing initial price guidance of T+160bp/215bp area that morning. This is the second bond issuance that the borrowing arm of the Indian Ministry of Railways has pulled this month, after cancelling a sale of local currency INR 35bn ($478mn) 5Y bonds. While the company did not comment on this, IFR sources said that IRFC pulled the deal as it did not get the desired pricing levels on the rupee bonds. A DCM banker from India commented, “IRFC needs to increase the price if they want to raise dollar bonds. For now, they will take an external commercial borrowing loan because they have tried the offshore and onshore market.” BNP Paribas, DBS Bank, HSBC, MUFG, State Bank of India London branch and Standard Chartered Bank were the bankers on the pulled deal.

The company last tapped the dollar bond markets in early February, when it raised $750mn via a 10Y bond at a yield of 2.8%, 167.5bp over Treasuries at the time of issuance. The 2.8% 2031s have slipped on the secondary markets soon after issuance to 94.28 yielding 3.49% currently. Its older dollar bonds were not spared either with its 3.95% 2050s falling from 101 levels in late January to 93 cents on the dollar currently.