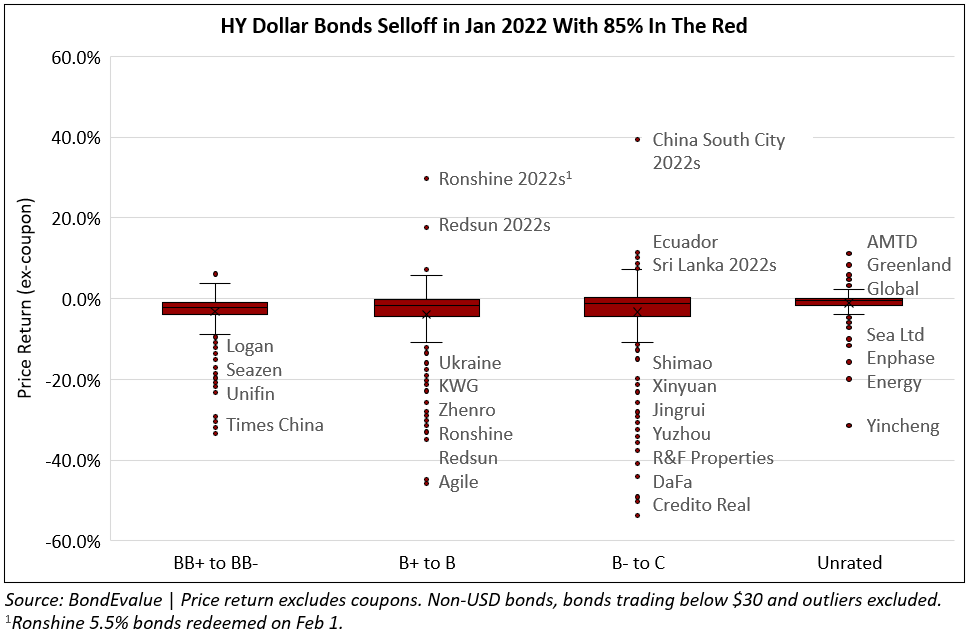 January was the fifth consecutive month where dollar bonds in our universe ended the month lower with 92% of bonds in the red. The US 2Y Treasury yield soared 44bp YTD after market participants increased expectations of the US Federal Reserve’s first rate hike in March 2022 from the initially expected June. With that, a faster balance sheet runoff and a possibility of a fourth rate hike have risen after the Fed sounded hawkish in its January meeting. The probability of a 25bp rate hike in March rose from 20% at the start of December 2021 to over 50% at the start of January; it currently stands at 94%. The 10Y Treasury yield too jumped 29bp to 1.80% at end-January. This led to a terrible month for bonds, especially investment grade (IG) bonds that are more sensitive to interest rate changes compared to high yield (HY) bonds, all else equal. 97% of IG dollar bonds ended January in the red, compared to 85% of HY dollar bonds that ended the month lower. Bloomberg noted that a global index of IG bonds posted their worst start to the year in over two decades, with total return losses of 2.2%. 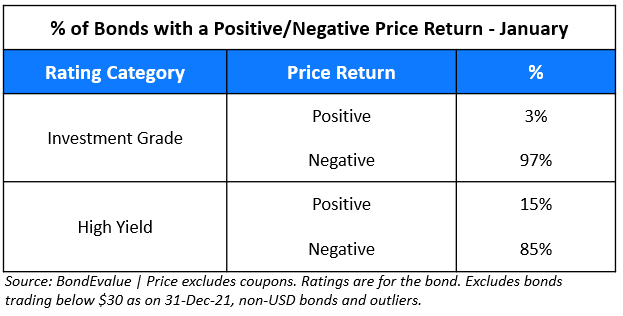 Within the IG space, longer-dated bonds from issuers rated AAA to A- witnessed the largest decline given their higher duration, led by Chile, Apple, Citigroup, Amazon, Nvidia, Alphabet and Goldman Sachs to name a few. France’s EDF also saw their bonds trade weaker after a string of negative news including a downward revision in its French nuclear output, an increase in the volume of energy it must deliver to alternative suppliers and a cap on tariffs were announced in mid-January. This led to Fitch downgrading the company to BBB+ from A-. Russian dollar bonds also lost over 10% of its value after geopolitical tensions rose on worries over its invasion of Ukraine. This was after Russian President Putin’s spokesman said that talks with the US and NATO in Geneva and Brussels had been “unsuccessful” at addressing Moscow’s security demands. 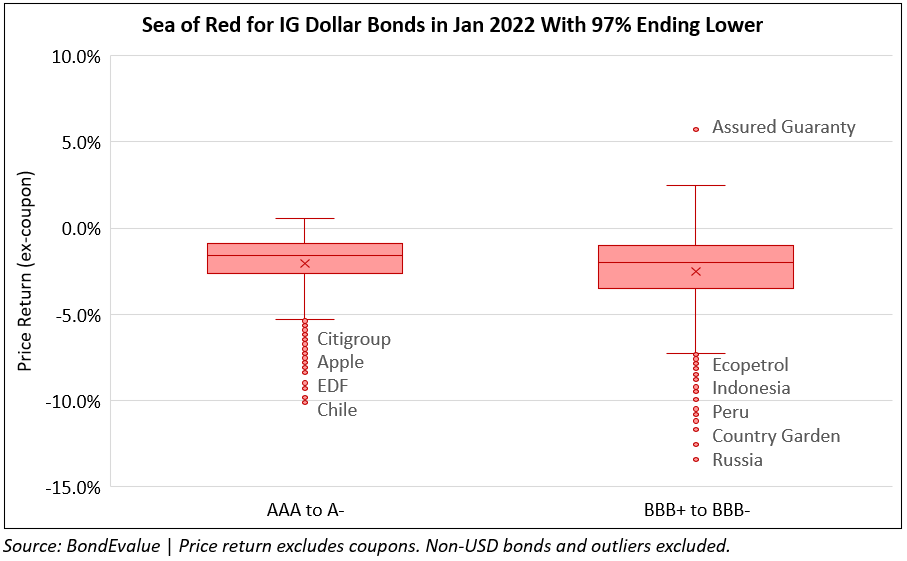 Within the HY space, Chinese property developers once again dominated the losers, albeit with some outliers such as Ronshine, Redsun and China South City that saw their upcoming 2022s jump as they approached maturity. China South City’s dollar bonds rallied after it it obtained consent to extend the maturity of its $348mn 11.5% bonds due February 12, 2022 and $346mn 10.875% bonds due June 26, 2022. The company also saw Shenzhen SEZ Construction and Development Group (SZCDG), an SOE make an equity investment of HKD 1.9bn ($245mn), helping the developer use proceeds from the share placement to repay debt. Redsun’s bonds rose after it bought back $48.2mn, or 11% of its 9.95% bond due April 2022.

Among the losers, Chinese property developers continued to fall as downgrades and uncertainties on low-rated developers mounted. Other losers included Mexican financial companies Credito Real and Unifin where the former’s bonds were hurt by downgrades and worries over its ability to pay upcoming bonds while the latter’s bonds fell on possible negative sentiment around Credito Real. Besides, Ukraine’s dollar bonds also slipped over heightened geopolitical concerns with Russia.

Global corporate dollar bond issuance volume stood at $299bn, up 2.2x MoM but 18% lower YoY. 86% of the overall issuances came from IG issuers while only 12% came from HY issuers. 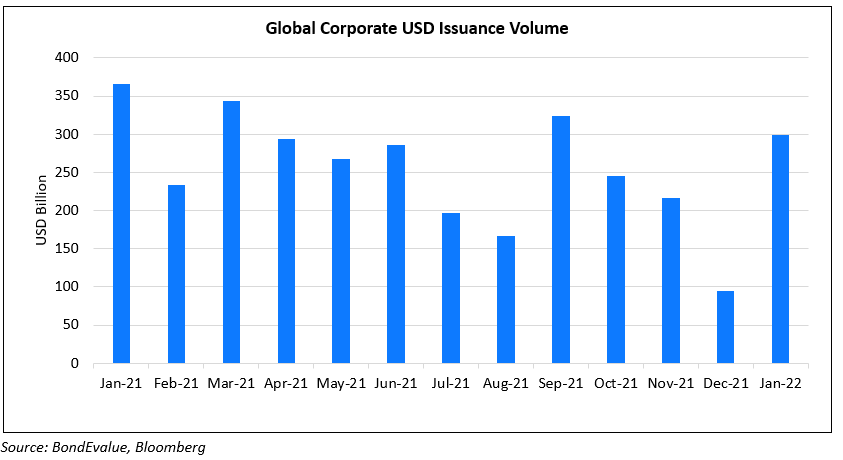 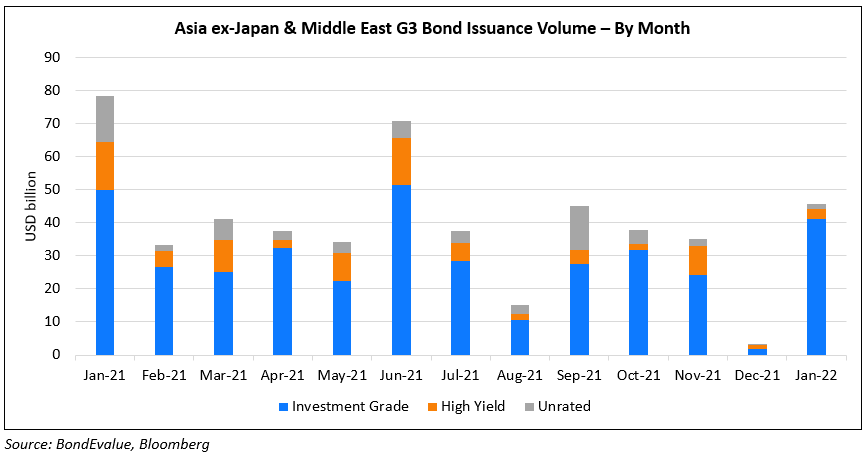 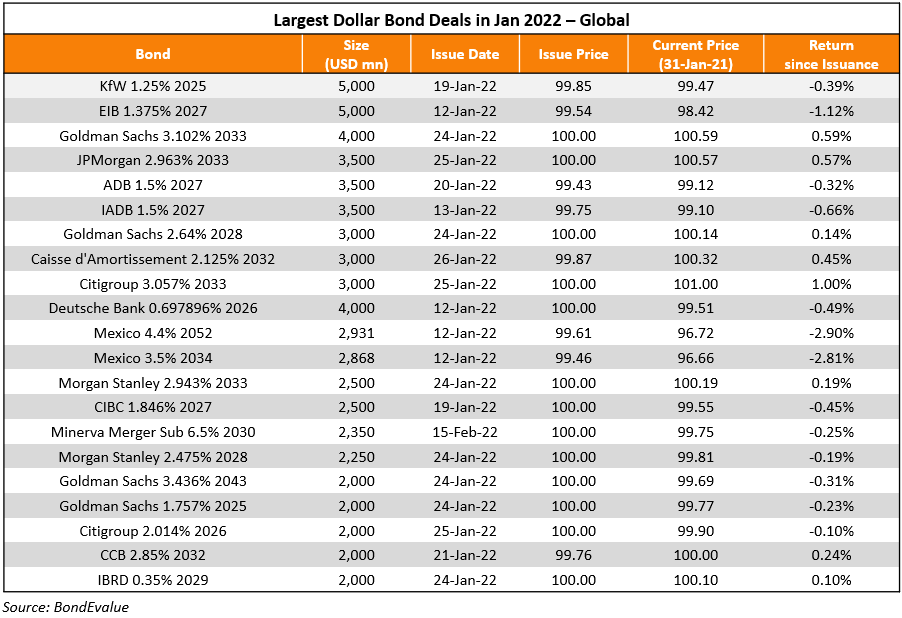 The largest deals from the APAC & Middle East region came from NAB and Nomura raising $4.75bn each via a five-part and three-part deal respectively followed by Reliance and AAHK raising $4bn via a three-part and four-part deal respectively. Other large deals included China Construction Bank’s $2bn, ICBC Financial Leasing’s $1.2bn dual-trancher, and Pakistan’s and China Cinda’s $1bn issuance each. 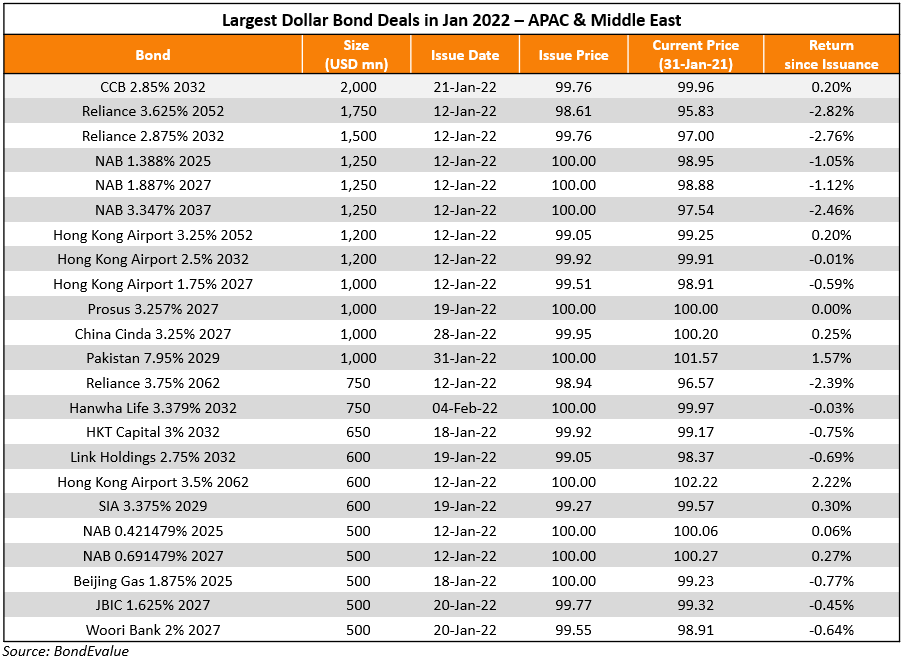 The top gainers and losers in January consisted a mixed bag of Chinese property developers – some like China South City, Ronshine, Redsun saw their bonds rally while others saw their bonds fall, including the likes of DaFa, R&F Properties, Agile, Times China etc. Among the gainers in the sector, China South City’s dollar bonds rallied after it it obtained consent to extend the maturity of its $348mn 11.5% bonds due February 12, 2022 and $346mn 10.875% bonds due June 26, 2022. The company also saw Shenzhen SEZ Construction and Development Group (SZCDG), an SOE make an equity investment of HKD 1.9bn ($245mn) helping the developer use the proceeds from the share placement to repay debt. Redsun’s bonds rose after it bought back $48.2mn, or 11% of its 9.95% bond due April 2022. Ethiopia’s dollar bonds gained after its government decided to end a state of emergency as a 15-month conflict with rebels eased, making it the best-performing sovereign debt in emerging markets this year as per Bloomberg data.

Among the losers, developers like DaFa and Agile saw their bonds fall after the former said that it did not pay out on its remaining dollar bonds maturing January 15, while the latter was downgraded to junk by Moody’s to B1 from Ba2 and by S&P to B+ from BB-. However, Credito Real was at the top of the losers list after downgrades by S&P and Fitch to B- from B+ and BB- respectively on increased refinancing and execution risk to meet repayment of its CHF 170mn ($185.7mn) 2.875% 2022s due on February 9 and further debt. 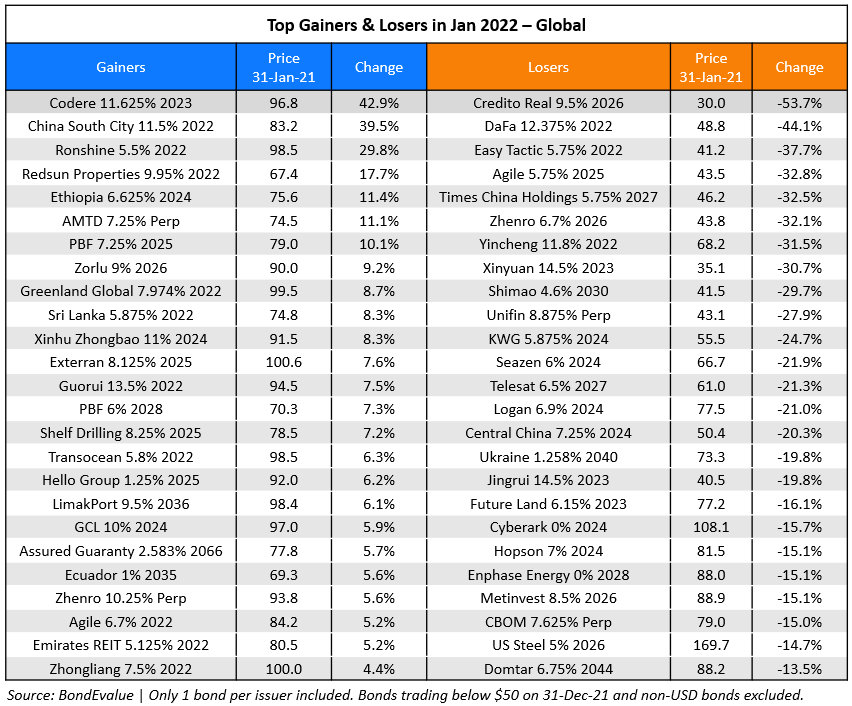 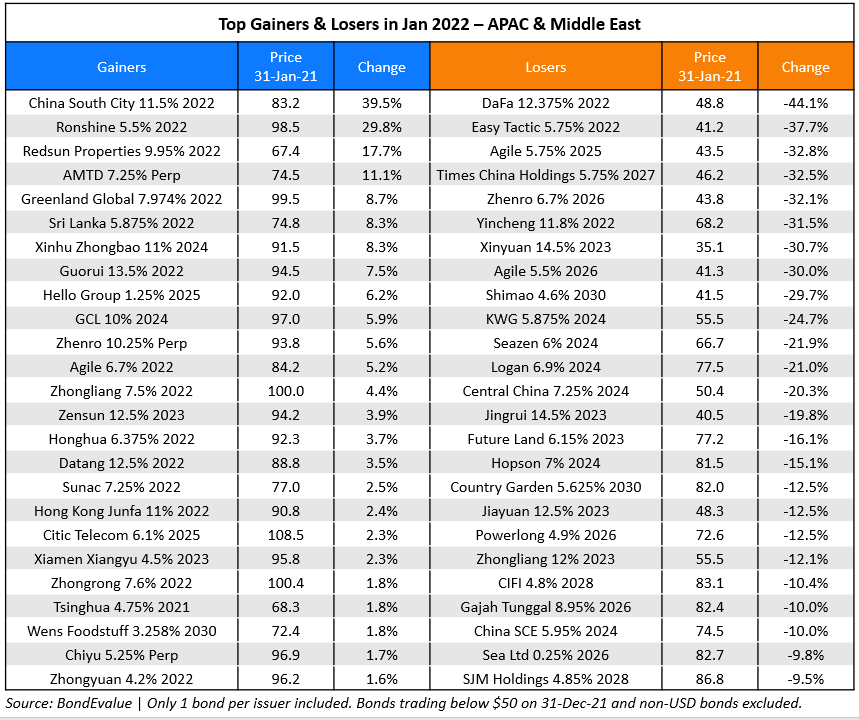