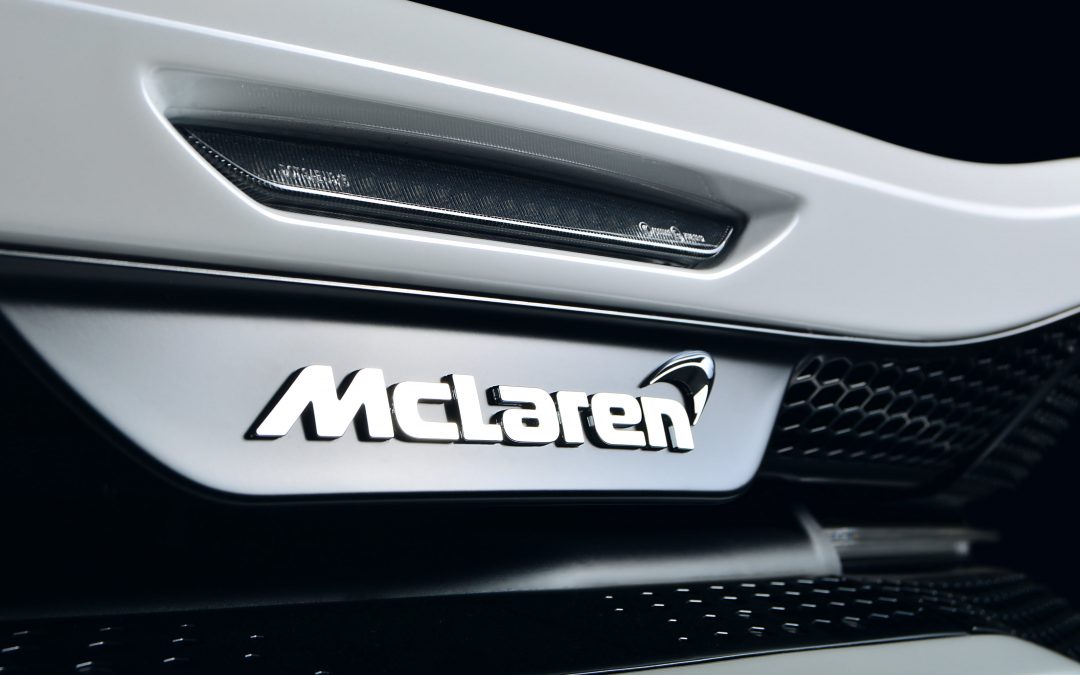 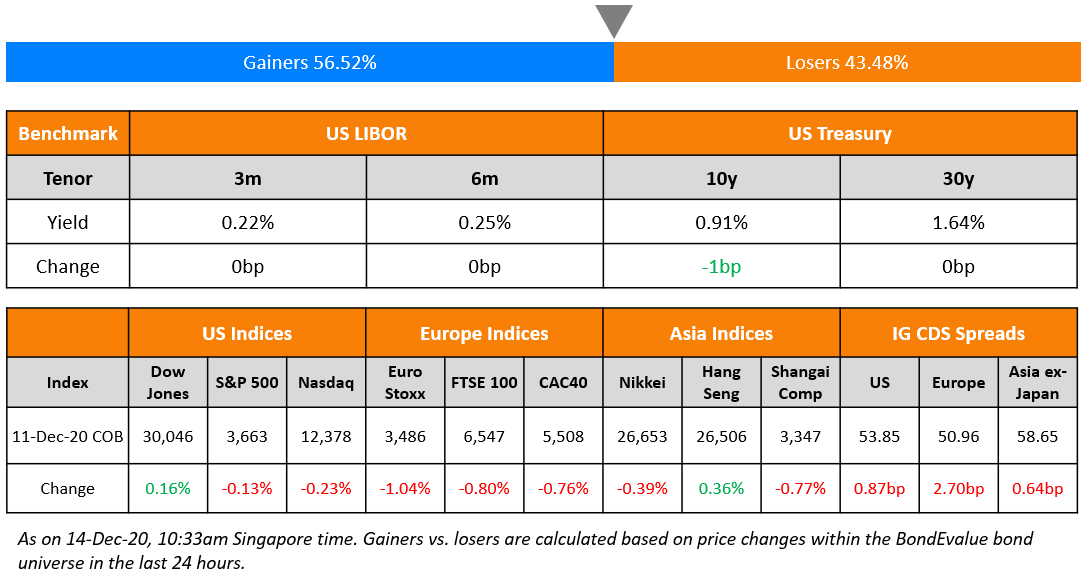 S&P and Nasdaq ended 0.1% and 0.2% lower on Friday while European equities slumped with the DAX down 1.4% while the CAC and FTSE were 0.8% lower each. Sanofi and GlaxoSmithKline mentioned that they would delay the launch of their Covid vaccine until late next year, a setback. On the other hand, AstraZenca said it would buy US biotech firm Alexion for $39bn in cash and stock. Besides, reports of the Congress disputing a Covid spending package that could drag through Christmas, also weighed on markets. US 10Y Treasury yields moved a tad lower to 0.91% while the 2Y yield fell 2bp to 0.12%. US IG CDS spreads widened 0.9bp and HY widened 2.5bp. EU main CDS spreads and crossover CDS spreads were wider by 2.7bp and 15.1bp respectively. Asia ex-Japan CDS spreads were 0.6bp wider and Asian equities have opened ~0.2% higher though the Shanghai Composite is lower 0.8%.

Sign up for the upcoming webinar on Navigating the Bond Market by Leveraging the BEV App at 4PM Singapore/HK time on December 16. The module is specially curated to help the users exploit the BondEvalue app to manage their bond portfolio on the WebApp as well as the Mobile App. It will cover the following topics. 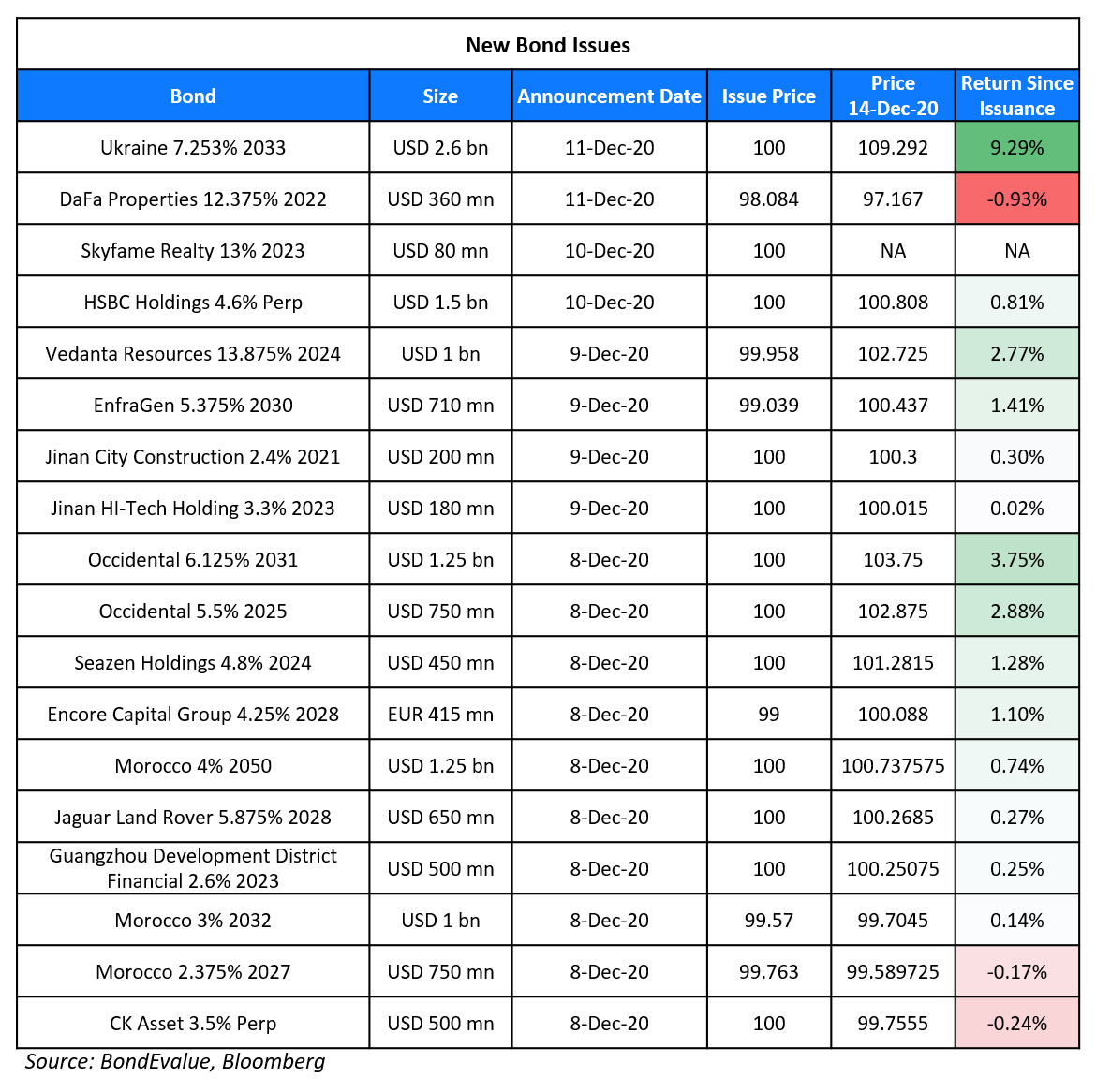 US primary market issuance rose 21% over the prior week to $38.7bn. IG contributed $24.7bn and HY $14bn. Prominent deals include bond sales from big banks HSBC, Morgan Stanley, Goldman and SocGen besides Nasdaq’s $1.9bn triple-trancher and Oxy’s $2bn issuance. Corporate bond sales are expected to cool down this week due to a typical year-end slowdown, as per Bloomberg. In North America there were a total of 67 upgrades and 133 downgrades combined across the three major rating agencies last week. LatAm saw $2.7bn of new bond deals priced, down 19% on a weekly basis. EU G3 issuance was muted as compared to the prior week, down 45% to $13.9bn. Gulf issuance was soft at $570mn with Kuwait’s Burgan Bank alone raising $500mn. Asia ex-Japan issuance was also soft at $3.8bn, down from $10.6bn in the previous week. Prominent deals included Vedanta’s $1bn via 3NC2s, CK Asset’s $500mn fixed-for-life PerpNC3 and Guangzhou Development District’s $500mn 3Y. Across the major rating agencies, there were 18 upgrades and 12 downgrades across Asia ex-Japan – the most prominent one being the Sri Lankan sovereign’s downgrade by S&P to CCC+ from B-. 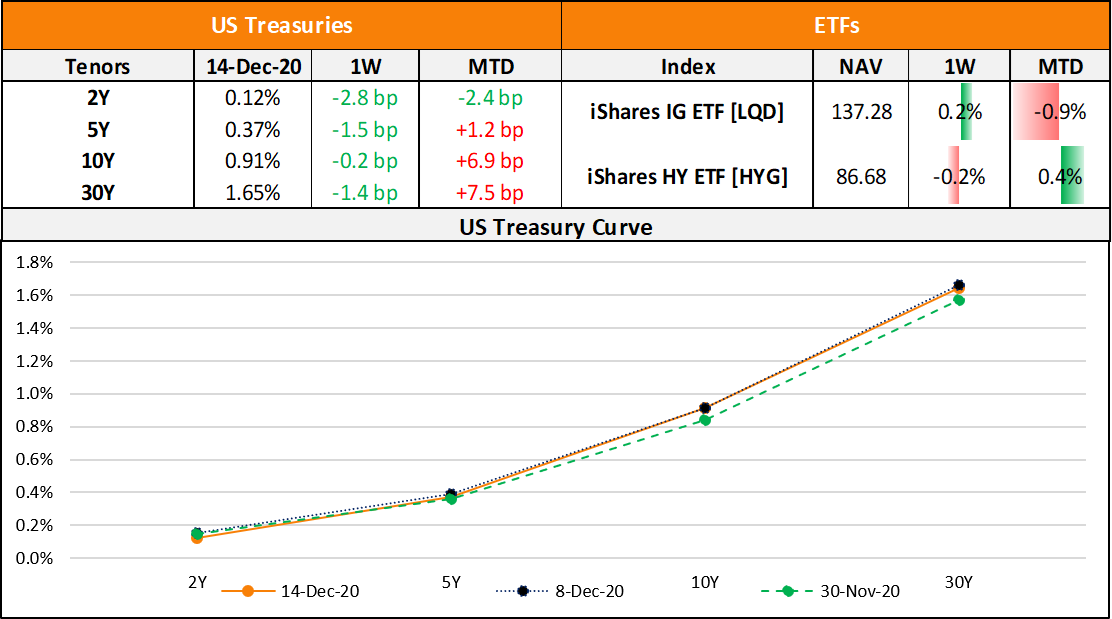 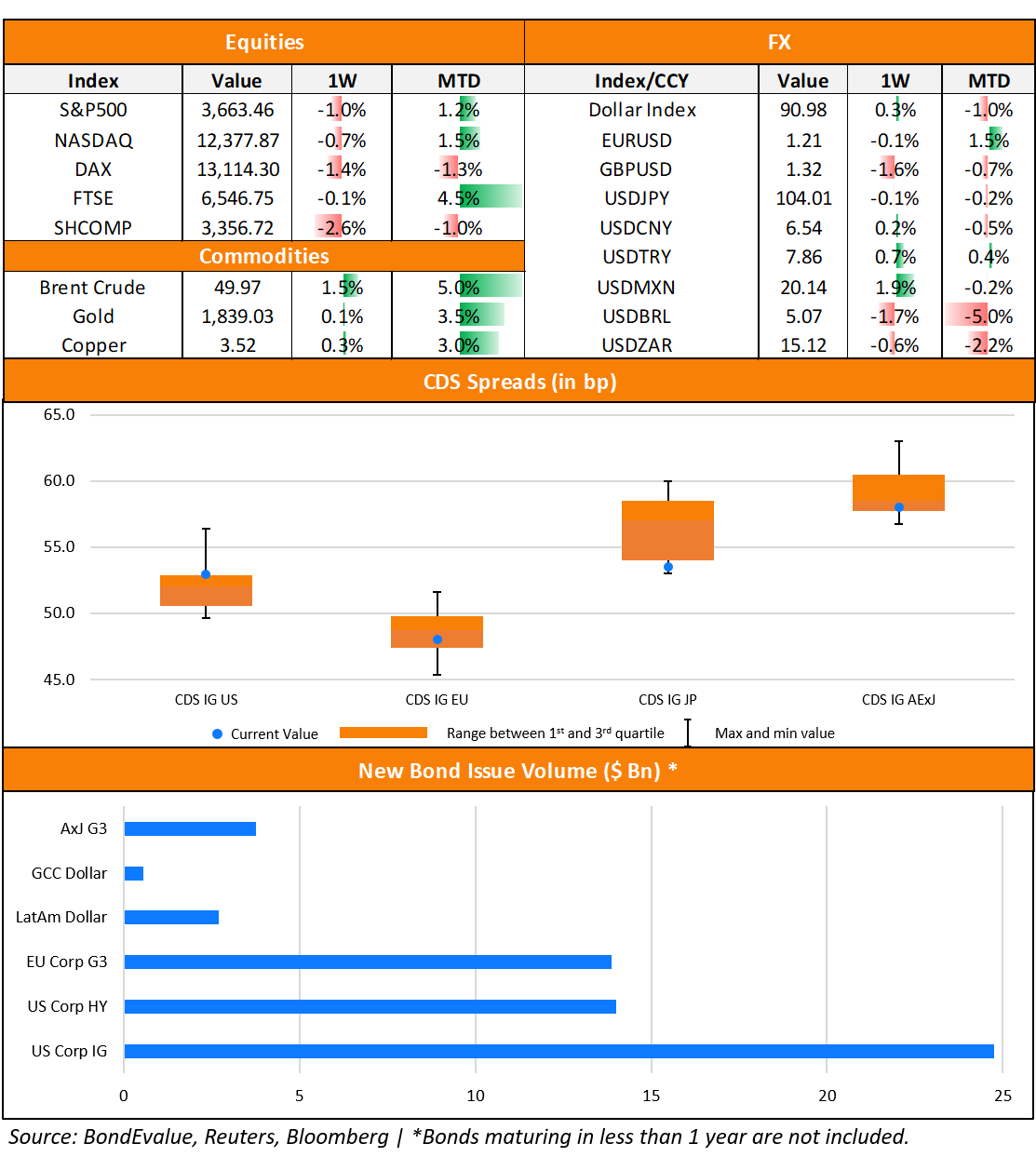 The European Central Bank (ECB), which overlooks the operations of 117 banks across the Eurozone is all set to allow banks to restart dividend payments although under stricter regulations. The supervisory board of the ECB is expected to make the announcement shortly but with a caveat that limits the dividend payments to banks with enough capacity to absorb any future losses. The Bank of England (BoE) had lifted its ban on shareholder distributions last week. ECB is expected to set the share distribution limits lower than that set by the BoE. The BoE had said, “In relation to full-year 2020 results, distributions to ordinary shareholders by large UK banks should not exceed the higher of: 20 basis points of risk-weighted assets as at end-2020; or 25% of cumulative eight-quarter profits covering 2019 and 2020 after deducting prior shareholder distributions over that period.” One person who was briefed on the ECB discussions stated, “The most likely scenario is to allow some institutions to pay dividends, but only under certain conditions, which will probably be more restrictive than the Bank of England”. The ECB had asked the banks under its jurisdiction to stop dividend payments and share buybacks in March with an aim to conserve cash for dealing with the pandemic. However, with the revival of the economy, it has started easing norms and followed the Fed in relaxing Banks’ Leverage Ratio Norms till June 27, 2021.

Chinese real estate developer Kaisa Group completed a tender offer to repurchase its dollar bonds due 2021. Details of the buyback are as follows:

Chinese property developer Yuzhou proposed to spin-off and separately list its subsidiary U Life Services as per a filing on the Hong Kong exchange. Yuzhou stated, “As at the date of this announcement, the Company indirectly holds the entire issued share capital of U Life Services. It is intended that upon completion of the proposed spin-off and the listing, the company will not retain any interest in the issued share capital of U Life Services and U Life Services will no longer remain as a subsidiary of the Company”. U Life is engaged in the provision of property management services and commercial operational services. Yuzhou’s dollar bonds were largely stable with its 5.375% Perp at 98.44, yielding 6.31%.

This move follows the spin-off and listing of Sunac’s and Evergrande’s property services arm last month. Evergrande Property Services, the property management services arm of Evergrande launched a HK$15.8bn ($2.04bn) IPO with a greenshoe option, a step to help parent company Evergrande pare back its debt pile of ~$122bn in late November. Sunac launched a HK$8.73bn ($1.13bn) IPO in early November with a greenshoe option. Sunac came out with a release of its over-allotment/greenshoe  that was fully exercised, amounting to 103.5mn shares representing 15% of the total number of shares initially available under the global offering. Additional net proceeds of approximately HK$1.1825bn ($150mn) are to be received by Sunac Services. Sunac’s dollar bonds were stable – its 7% 2025s and 7.5% 2024s up 0.03 and 0.19 to 103.44 and 105.19, yielding 6.12% and 5.3% respectively.

Ukraine raised $600mn via a tap of its 7.253% 2033s at a yield of 6.2%, 20bp inside initial guidance of 6.4% area on Friday. The issuance is expected to rated at par with the issuer rating of B with proceeds earmarked for general budgetary purposes. Ukraine’s new issuance follows debt sales by other emerging market sovereigns Morocco and Montenegro last week and precedes Laos‘ dollar bond issuance expected as soon as this week. The bonds met with strong investor demand with orders exceeding $1.85bn, over 3x issue size allowing the Eastern European nation to upsize the deal from the originally planned $500mn. Ukraine’s older 7.375% bonds due 2032 traded lower by 0.5 points to 110.2 yielding 6.09% on the secondary markets.

British sports car manufacturer McLaren announced on Sunday that it will be selling a 15% stake in its Formula One business to New York based MSP Sports Capital. The deal will see MSP increasing its stake to 33% after 2 years and values the F1 business at £560mn ($746mn). Paul Walsh, McLaren’s executive chairman, told the Financial Times that “an injection of £185mn ($246mn) over three years will help fund the McLaren racing team without draining cash from the supercar business that accounts for more than 80% of the wider group’s operations.” This is part of McLaren’s broader restructuring plan to raise capital to pare down debt. Mike Flewitt, chief executive of McLaren Automotive told the FT last week that the company plans to raise another £300mn-£500mn ($400mn-$665mn) in a fresh equity injection in order to pay down debt, before refinancing its bonds next year. McLaren is also planning a sale and leaseback of its headquarters in Woking.

Boeing’s longer dated bonds have witnessed a steady rise since November after the US Federal Aviation Administrator withdrew its grounding order of Boeing’s 737 Max fleet. Earlier in October, the EU regulator had also given a green signal to the beleaguered aircraft. After clearance from the administrator, Boeing has witnessed a ramp up in its orders after major customers including American Airlines and United Airlines indicated that they would restart the Max operations. This ramp up in orders is critical to Boeing at a time when there is a drop in demand for air travel that has resulted in a lower demand for new aircrafts. In fact, Boeing has kept up its production despite the grounding post two fatal crashes and cancellation of orders by airlines to deal with the pandemic just to ensure that its supplier base did not go out of business. The aircraft scores over the others due to its higher fuel efficiency. The company is holding ~450 Max aircrafts and estimates to deliver half of those by the end of 2021 on improving demand and recommencement of domestic aviation. It hopes to complete most of the deliveries by 2022. Recent positive news for Boeing include:

While Boeing remains focused on returning its 737 fleet to operations, it’s future in one of the biggest aviation markets of China remains uncertain due to the broader US-China trade conflict. Its 3.625% 2031s issued in November were up ~8% since issuance and were trading at 108.6. Its 3.5% 2039s were trading at ~101 points up from ~91 levels in November. 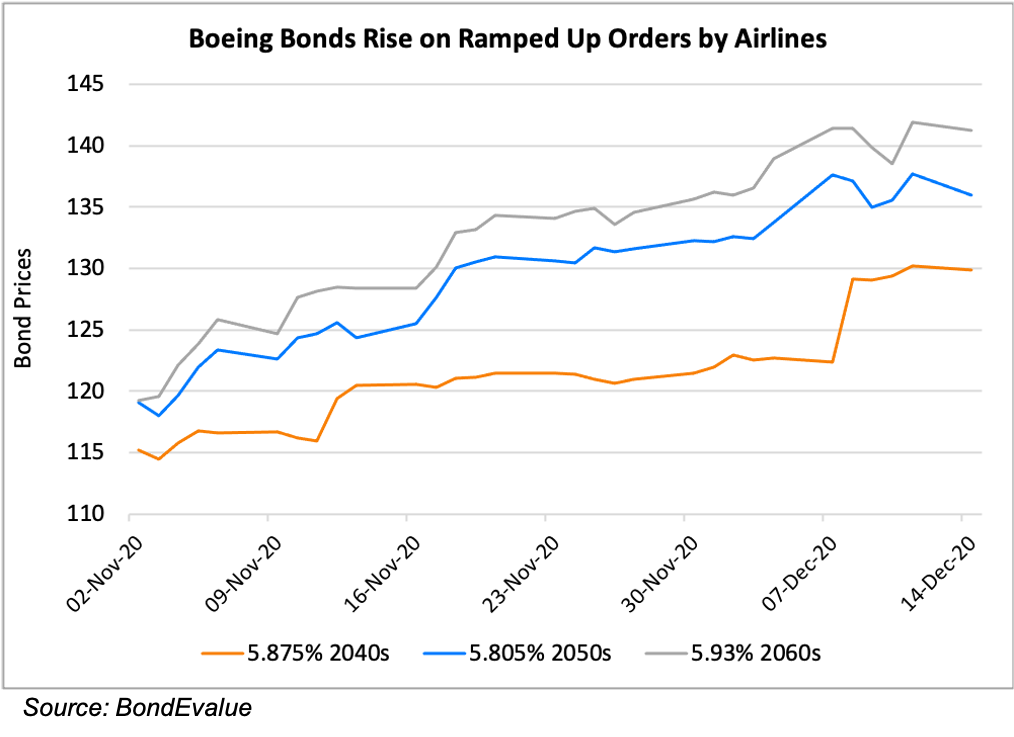 Diaspora bonds are sovereign bonds that target investors that have emigrated to other countries. The reasons for emigration range from political unrest to better opportunities. For issuing countries, it is considered to be a possible stable source of finance particularly in bad times and can support the sovereign’s credit rating. For investors, it is believed to be a semblance of patriotism for the country of origin whilst also serving to manage risk since debt is serviced in local currency. Israel and India are two prominent nations that use this form of financing having collectively raised $35-$40bn via diaspora bonds. Some bonds even carry a “patriotic discount” that reduces the borrowing cost for the issuing sovereign.

“S&P, in its medium-term projections, grossly overstates the level of fiscal deficit and the external deficit of the country… S&P, in its assessment, ignored the envisaged medium-term positive developments as a result of several key proposals presented in the Government Budget 2021 with regard to fiscal consolidation and deficit financing in the period ahead”, the Ministry of Finance said.

“It seems that the comments of these agencies are being periodically aired to justify their own prophecies, which (fortunately) have failed to ignite a large-scale loss of confidence in the Sri Lankan economy by local and foreign investor,” State Minister of Money and Capital Markets Ajith Cabraal said.

“If anyone had known what was coming – any of the top 15 banks – they would have invested more in the sector because the fees have been big this year … Being a primary dealer) has been an investment and it doesn’t always make us money but it helps our other franchises to say we are a leader in the rates markets – that’s the intangible benefit…Think of a client like the EU, if you’re not very strong in sovereign primary dealerships it will be very difficult for you to win that business”, a banker said on condition of anonymity.

On ECB’s Lagarde bags hard-won deal, but battle with hawks has only begun – Marco Brancolini, an economist at Nomura

Now that the market knows the commitment to PEPP is a soft one, expect it to challenge the ECB’s resoluteness as data surprises to the upside and as hawks become more vocal,” Marco Brancolini, an economist at Nomura said.

“Volatility this year was enormous… The oil hedging program is necessary. It offers stability amid public finance and budget challenges. It’s expensive but has generated benefits, it prevents the country losing its investment grade rating and guarantees solvency”, said Raul Gonzalez, who worked in the Mexican finance ministry and is now a lecturer in Tec de Monterrey university.

“It was more fragile than the last year considering the already crazy volatility and low prices…they tried to hide it more than usual, but now there’s no more hiding. For sure, it’s there”, said an oil trader.

On Aramco’s panda bond may be an endangered – David Yim, regional head of capital markets for Greater China & North Asia at Standard Chartered

“Given the relatively small issue size, panda bonds are unlikely to form a significant part of these oil groups’ overall bond issuance” David Yim, regional head of capital markets for Greater China & North Asia at Standard Chartered. He said the US dollar remains the main transaction and funding currency in the oil sector. 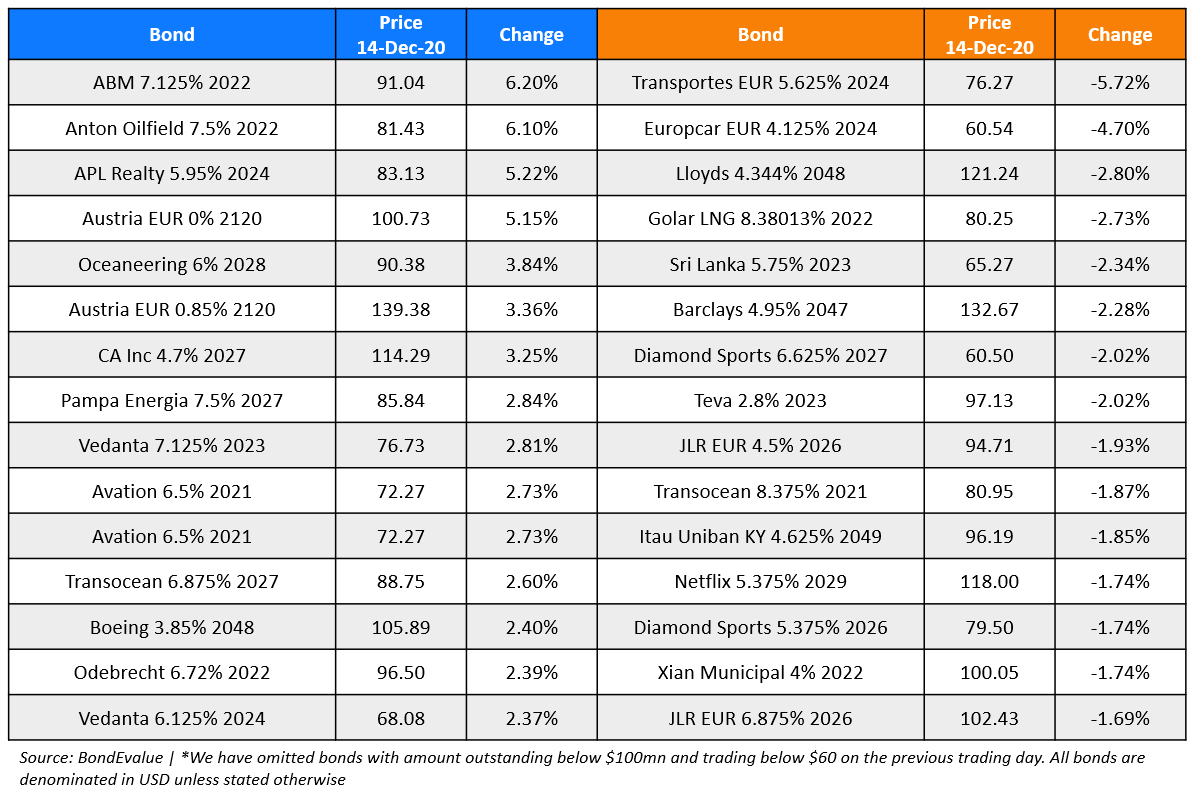