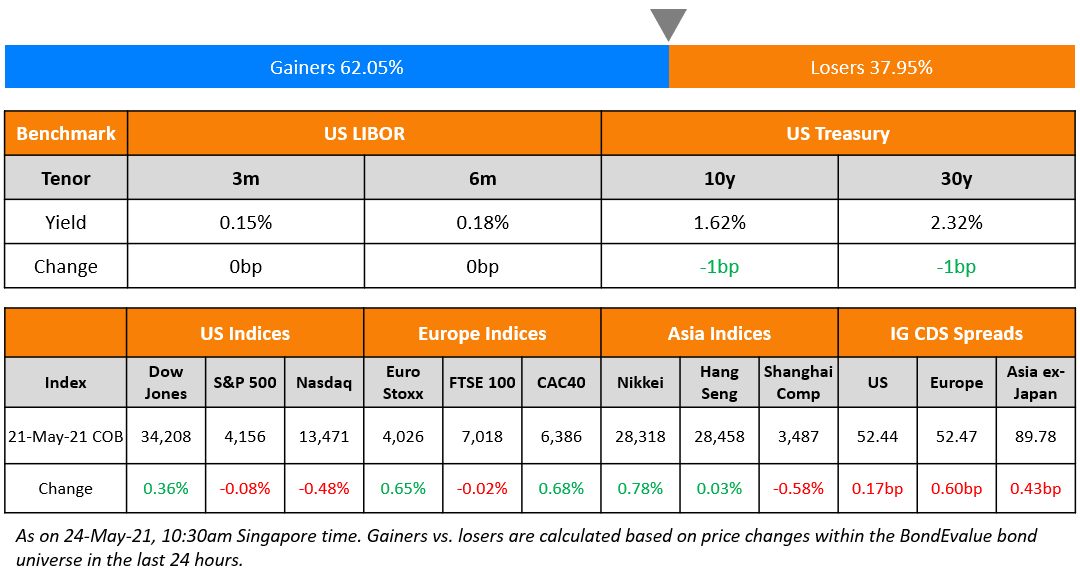 US markets ended lower on Friday mainly pulled down by the tech and consumer discretionary sectors.  S&P was marginally down by 0.1% while Nasdaq was down by 0.5%. While Apple dropped 1.5%, Amazon 1.4% and Tesla 1%, Nvidia continued trending higher by 2.6%. US 10Y Treasury yields fell ~1bp to 1.62% as the Dallas Fed data indicated that they expected lower growth in jobs in the US for May, stating that while business hiring demand remains high, the supply of people willing or able to work is lower. In European Indices, FTSE ended flat while DAX and CAC were up 0.5% and 0.7%. US IG CDS spreads were 0.2bp wider and HY spreads were 1bp tighter. EU main spreads were 0.6bp wider and crossover spreads were 3.3bp wider. Asian equities have witnessed a mixed start – Nikkei and Shanghai are up 0.5% and 0.2%, Hang Seng is down ~0.3% with Asia ex-Japan CDS spreads widening 0.4bp. 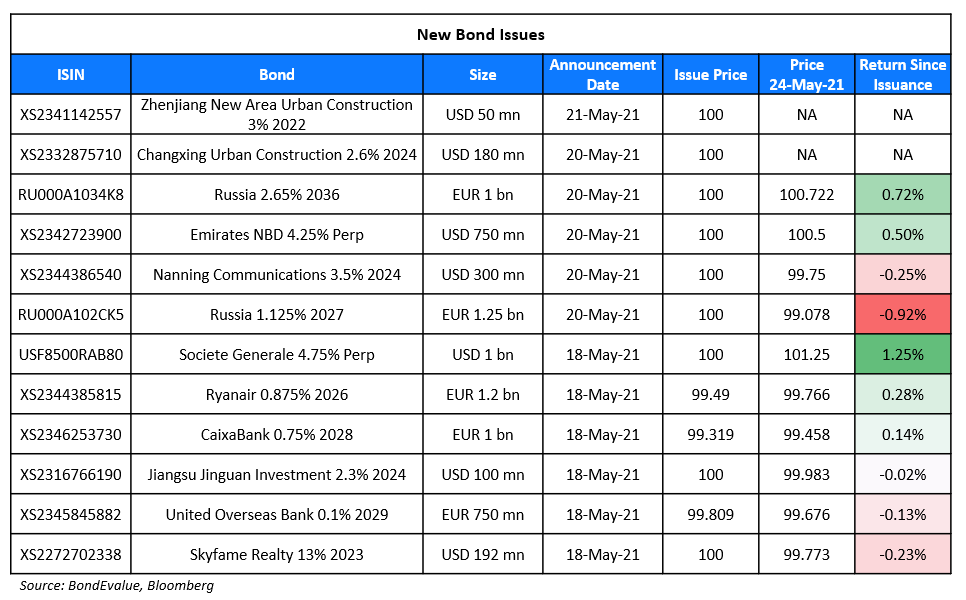 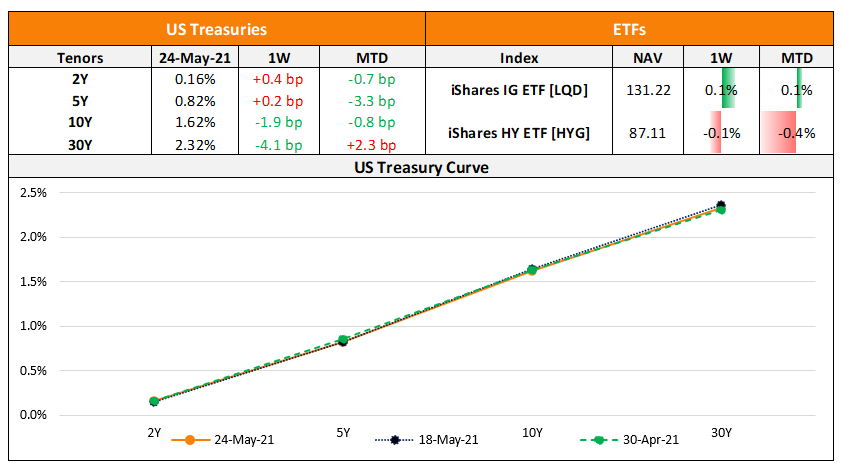 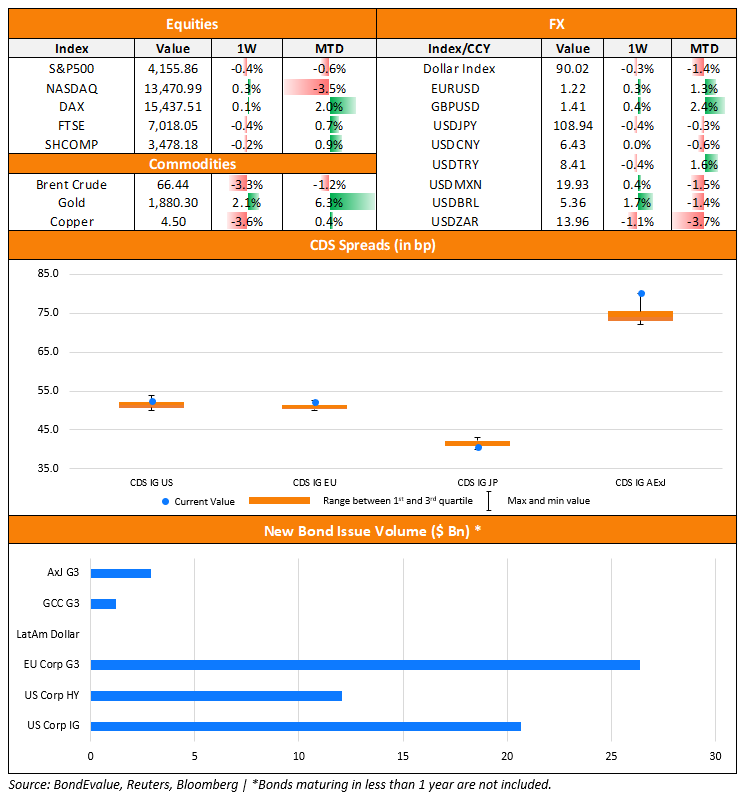 On inflation pressures likely to ease in 2022 – Mary Daly, Federal Reserve Bank of San Francisco President
“There’s just going to be a sequence of these temporary factors that are going to persist probably through the end of the year,” Daly said. “They will start to roll off at the beginning of next year. How many of them will roll off or whether other bottlenecks will emerge as we start to get the economy back into shape and get back into recovery is hard to say.”
”I don’t want to front run the committee discussions by coming down on any particular thing because we’re not in a place where that’s been decided,” Daly said. “You would hear that first from the chair and he has signaled that we’re not ready to start talking about talking about these types of things.”
On discussing tapering sooner rather than later – Patrick Harker, Philadelphia Fed Bank President
“It is something that, in my mind, we should start to have a conversation about sooner rather than later,” Harker said.
On the view that it is too early to discuss winding down emergency support – Christine Lagarde, European Central Bank president
“We are committed to preserving favourable financing conditions using the PEPP [Pandemic Emergency Purchase Programme] envelope, and to do so until at least March 2022.” “It’s far too early and it’s actually unnecessary to debate longer-term issues. Our focus in June is going to be on favourable financing conditions for the economy at large and to all sectors.” “I have repeatedly said that policymakers needed to provide the right bridge across the pandemic, well into the recovery, so we can actually deliver on our mandate,” she said.
On Europe’s risky bonds tempting traders as ECB signals no taper yet
Jan von Gerich, chief strategist at Nordea Markets
“Volatility will increase now that there are more competing drivers and increasing questions about the ECB’s willingness to buy bonds aggressively.”
Peter Chatwell, Mizuho International’s head of multi-asset strategy
“The risk of a premature tightening is lower than in the past, and is currently over-estimated by market participants.”
Imogen Bachra, European rates strategist at NatWest
“The key thing for Italy is that the ECB – and central banks in general – is that they will be the last to believe and react to the inflation story.” “The recovery story should be a bigger positive for Italy than the withdrawal of ECB support.”
On frontier market assets gaining popularity over emerging market peers amid rising rates
Leo Hu, fund manager at NN Investment Partners
“People are still worried interest rates have to rise and they are looking for yield and interest-rate duration.”
Jens Nystedt, a fund manager in New York at Emso Asset Management
“We have been allocating more to frontier sovereign credits.” “In particular, we like the outlook for Nigeria, Ghana and Angola given that they would be some of the main beneficiaries from higher oil prices.”
Edgardo Sternberg, co-manager for emerging-markets debt portfolios at Loomis Sayles & Co
“There are quite some risks, such as the worsening of the pandemic or too much stimulus, but we stick with the rosier scenario for frontier markets.” “Frontier markets should continue to outperform,” he said.
On China bracing for $1.3 trillion maturity wall as defaults surge
Iris Pang, chief economist for Greater China at ING Bank NV
“As credit risk increases, everyone wants to limit their exposure by investing in shorter maturities only,” said Pang. “Issuers also want to sell shorter-dated bonds because as defaults rise, longer-dated bonds have even higher borrowing costs.” On the cycle of refinancing and repayment risk, “it may last for another decade in China,” she said.
Wu Zhaoyin, chief strategist at AVIC Trust Co
“It’s difficult to sell long-dated bonds in China because there is a lack of long-term capital,” Wu said.
On investors bracing for more credit downgrades and bond selloff for Colombia
William Jackson, chief emerging markets economist for Capital Economics Ltd.
“The downgrade of Colombia to junk status on its foreign currency credit rating reflects the deterioration in its fiscal dynamics and could be a prelude to further downgrades.” “That, to us, seems quite likely given the political difficulty of passing tax reform.”
Guido Chamorro, co-head of emerging-market hard-currency debt at Pictet Asset Management Ltd
“Colombia is still technically investment grade, but this is just semantics,” Chamorro said. “Downgrades are typically get priced by the time they happen.”

“These findings indicate that difficulties assessing and benchmarking the sustainability credentials of ESG bonds are acting as a barrier to stronger growth,” said Inwood.
On the view that bonds are no longer a good hedge against stocks – Charlie McElligott, a cross-asset strategist at Nomura Securities
“Long bonds as your hedge worked in a Goldilocks era.” “But now, due to the pandemic response, that old dynamic simply no longer applies. Inflation is a volatility catalyst.” “Only in the case of an extreme inflation overshoot would the Fed’s hands be tied.” 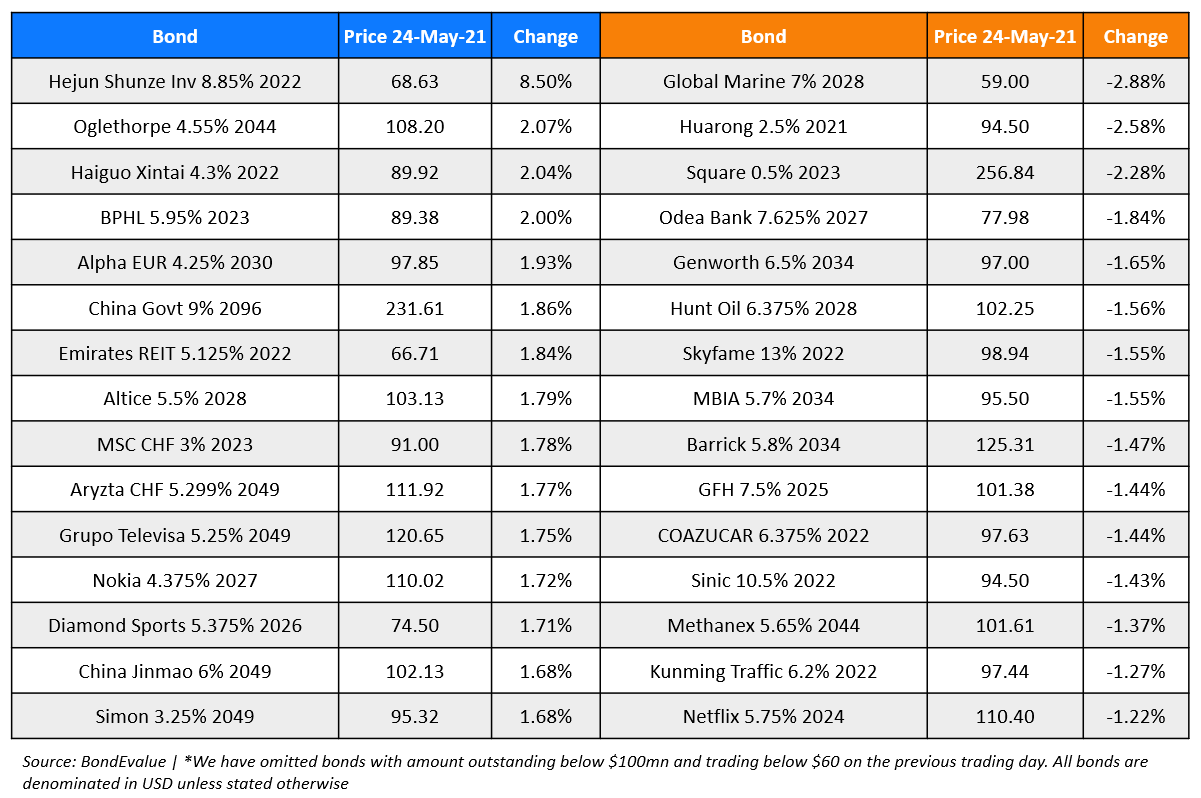