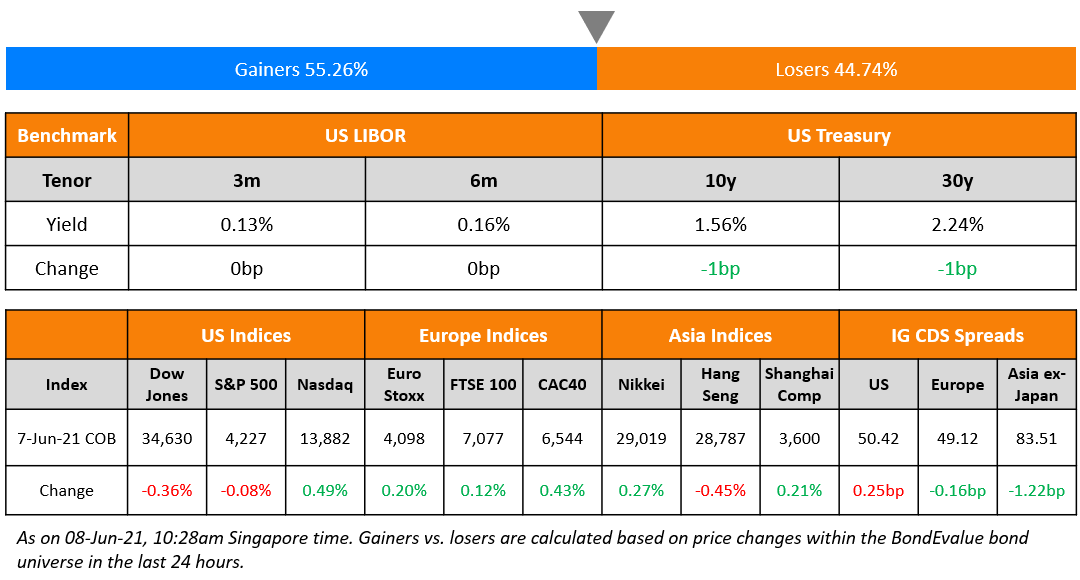 US markets remained close to highs even as the S&P dipped slightly by 0.1%. The tech heavy Nasdaq on the other hand gained 0.5%. There seemed to be little impact of the new G7 15% global corporate tax on multinationals as Amazon was up 0.3% and Google up 0.1%. US 10Y Treasury yields were 1bp lower at 1.56%. In Europe, DAX closed marginally lower by 0.1% while FTSE and CAC were up 0.1% and 0.4% respectively. US IG and HY CDS spreads widened slightly by 0.3bp each. EU main CDS spreads tightened marginally by 0.2bp and crossover CDS spreads were flat. Asian markets are largely flat with Nikkei up 0.3% and Shanghai and HSI unchanged, Asia ex-Japan CDS spreads tightened 1.2bp. 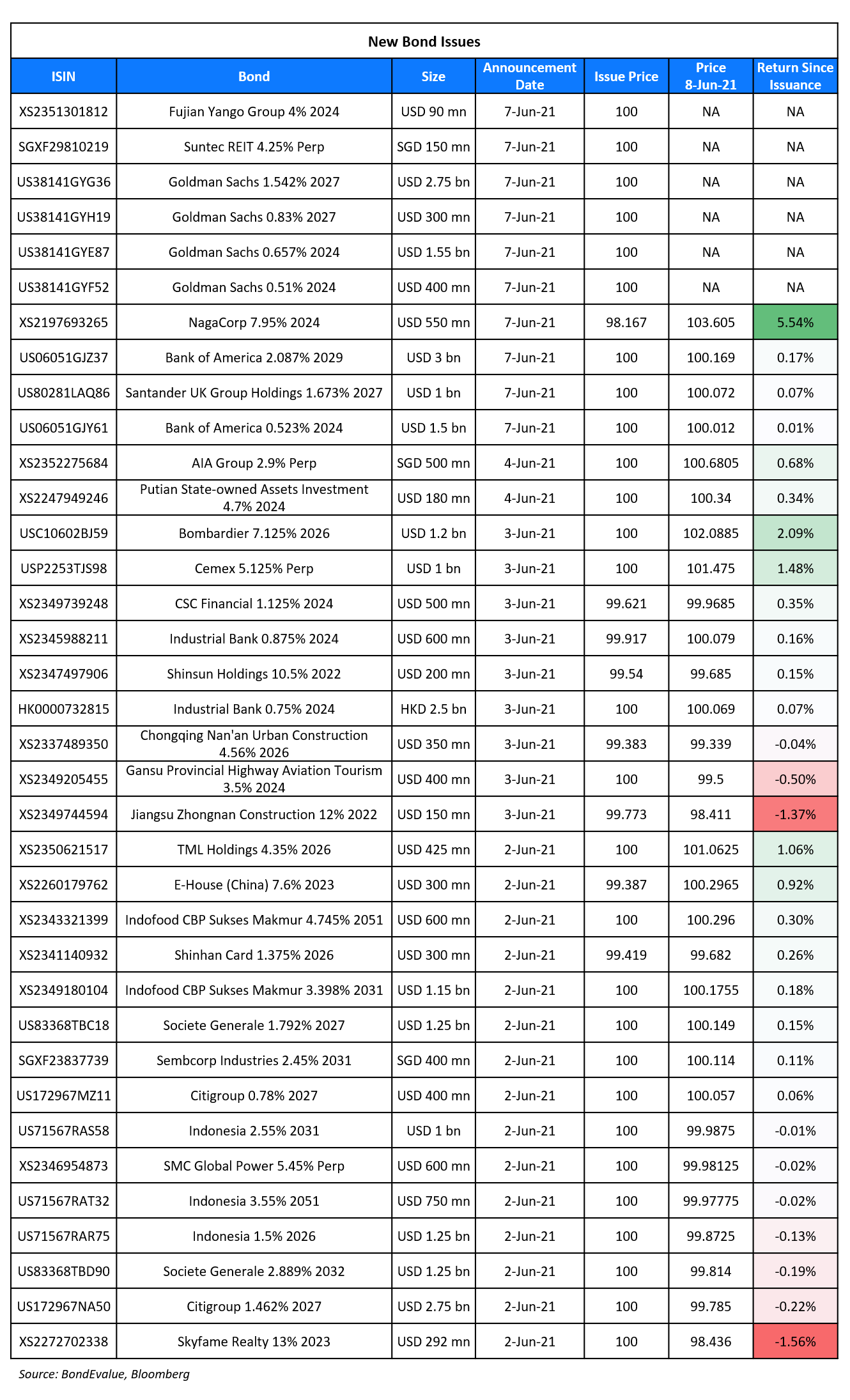 Santander UK Group Holdings raised $1bn via a 6Y non-call 5Y (6NC5) bond at a yield of 1.673%, 22bp inside initial guidance of T+110bp area. The SEC registered bonds have expected ratings of Baa1/BBB/A. Proceeds will be used for general corporate purposes.

Goldman Sachs raised $5bn via a four-part offering. Details are listed in the table below:

Suntec REIT raised S$150mn via a Perpetual non-call 5Y PerpNC5 bond at a yield of 4.25%, 20bp inside initial guidance of 4.45% area. The bonds have expected ratings of B1/B+. If not called, coupons reset at the end of 5Y and every five years thereafter to the prevailing Singapore dollar SOR or an alternative reference rate plus the initial credit spread of 329bp. There is no coupon step-up. Coupons are deferrable and non-cumulative. Proceeds will be used to fund general corporate needs, debt refinancing, asset enhancement work, investments and acquisitions. Private banks will receive a 25-cent concession. As compared to recent SGD PerpNC5s, Suntec REIT’s new PerpNC5s were priced wider to Mapletree North Asia’s unrated 3.5% PerpNC5 yielding 3.64%, Mapletree Industrial Trust’s 3.15% PerpNC5 (BBB-) yielding 2.97% and Landlease’s unrated 4.2% PerpNC5 yielding 4.09%.

Fujian Yango Group raised $90mn via a 3Y credit-enhanced bond at a yield of 4%. The bonds were unrated. Proceeds will be used to refinance offshore debt and to develop the company’s education business. The bonds have the support of standby letter of credit provided by Jiangxi Bank Nanchang Xiangnan branch.

A bond buyback is a mechanism where the issuer repurchases its bonds from bondholders in the open market. They work similar to share buybacks wherein the principal gets reduced by the amount bought back and the bonds tendered by bondholders get cancelled. Issuers buy back bonds so that they can reduce their overall debt and thereby interest expenses over time, using it as a liability management strategy. If the bonds are trading cheaper than its issue price, the issuer would find it particularly more attractive to buyback bonds. Tender offers are a form of buyback where bondholders could get either cash or new bonds of equivalent value at a specified price.

Kraft Heinz has announced a buyback of 10 of their outstanding bonds via a tender offer.

On blue chip firms ramping up debt sales amid signs that borrowing conditions may not last
In a note by Daniel Sorid and team, Citigroup strategists
Citigroup sees “market factors that should encourage high-rated, lower-levered firms to take advantage of a market hungry for dollar-denominated spread product by pulling forward borrowing plans.”
In a note by Hans Mikkelsen and team, Bank of America Corp. strategists
“Seasonality shows a modest pace of issuance as we approach the summer with more holidays and as market participants go on vacations.”
On the Federal Reserve reversing decision to buy bond ETFs in effort to maintain liquidity
Dave Nadig, chief investment officer at ETF Trends
“It was very important that they stepped in and showed they had faith in the structure and the system, and it worked.” “The $8 billion in bond ETFs held by the Fed are really pretty irrelevant to the market as a whole.”
Eric Balchunas, Bloomberg Intelligence ETF analyst
“In retrospect, that might have been the closest thing to a free lunch that a trade could ever be.” “But that was a tiny part of the monster inflows that went into bond funds.” “It’s totally relevant from a symbolism point of view than from an actual dollar amount.” “It’s really the signal they provided to the market.”
On Asia’s ESG bond issuances hitting record high of $69 bln in 2021 so far
Kaleem Rizvi, Citigroup’s head of corporate banking in Asia Pacific
“Demand for green deposits, loans and access to capital markets is running at record levels versus prior years and is gathering further momentum.” “More clients are realising they need a clear ESG strategy. Investors and other stakeholders are demanding it and they don’t want to be left behind.”
Kamran Khan, Deutsche Bank’s head of ESG for Asia Pacific
“Investors have an expansive appetite at the moment but there is also an increasingly discerning approach to investing; they don’t want to get burnt with a greenwashing label.” “They have a lot of capital, they want to invest it in ESG transactions, but they want them to be of very high quality with substantiated impact.”
On China bond-selloff fears growing as liquidity begins to tighten
Yin Ruizhe, a fixed-income analyst at China Merchants Securities Co
“Investors should be more cautious on the Chinese bond market in June.” “Local government bond issuance will make the market more sensitive to capital needs, especially as liquidity in the banking system has already tightened.”
Tommy Xie, head of Greater China research at Oversea-Chinese Banking Corp
“Volatility in the money market is probably rising because of the higher bond issuance in the pipeline and strong equity performance.” 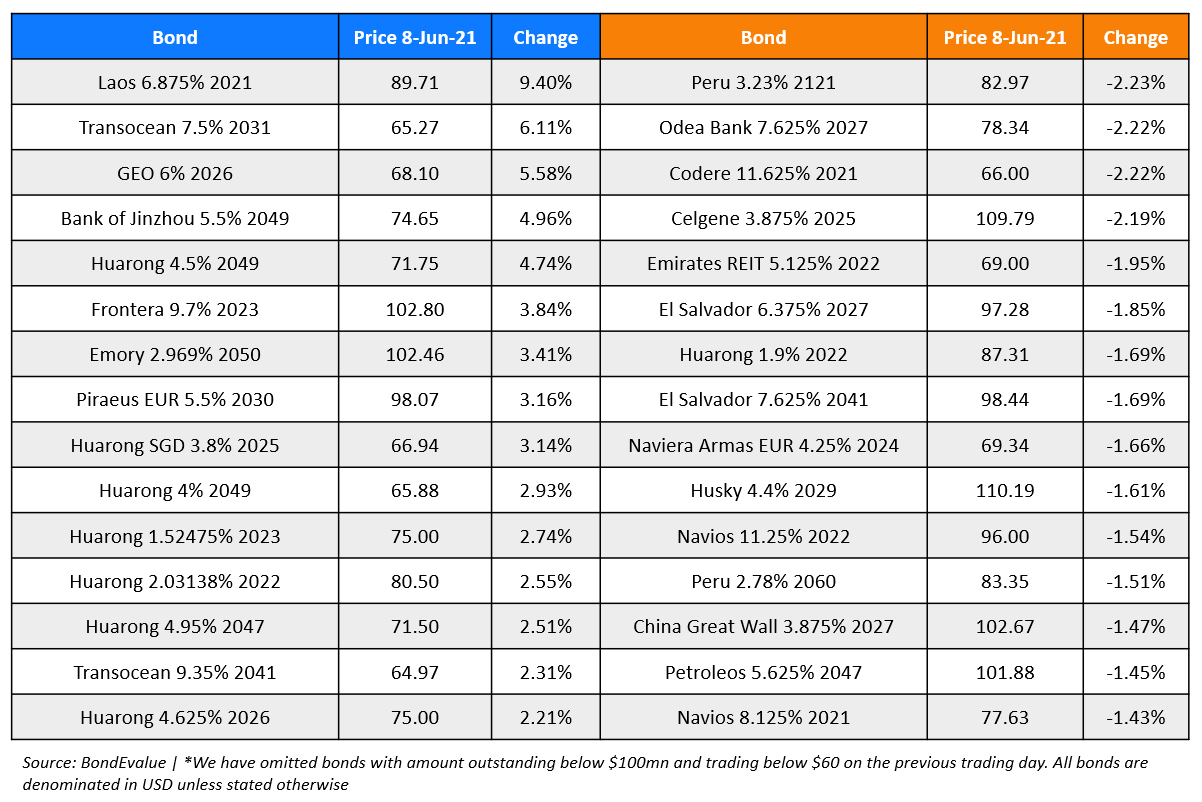