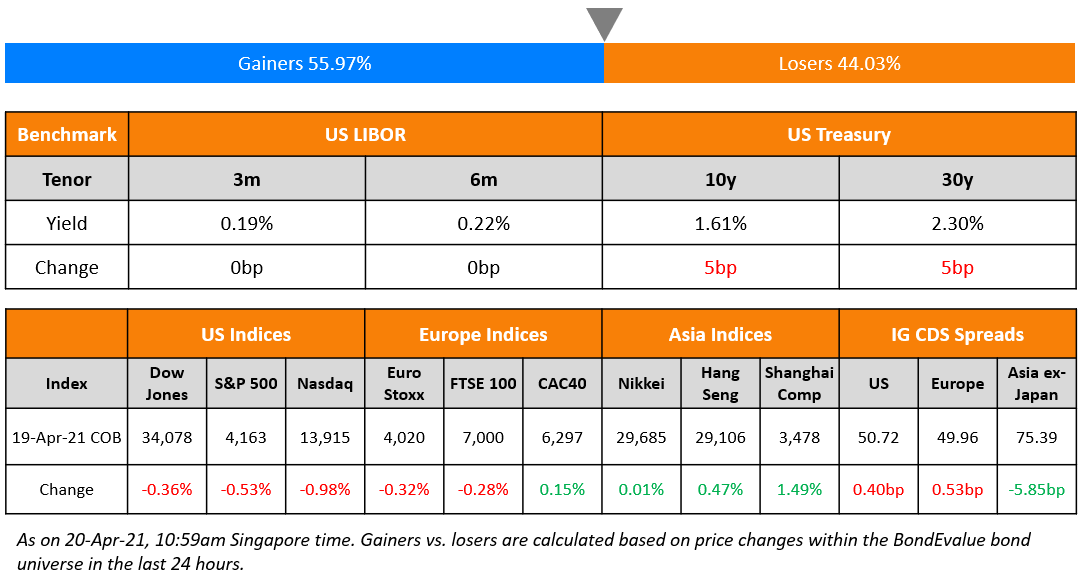 S&P fell 0.5% and Nasdaq was down 1% as equities slipped across the board. Tesla shares were down 3.4% after a fatal crash involving one of its autonomous cars. US10Y Treasury yields firmed 5bp to 1.61%. European equities also fell with DAX down 0.6% and FTSE down 0.3%. Prospects of a higher post-election government spending saw German Bund yields firm 3bp to -0.23%. US IG CDS spreads were 0.4bp wider and HY was 2.7bp wider. EU main CDS spreads were 0.5bp wider and crossover spreads tightened 3.6bp.  Asian equity markets are muted today after Wall Street’s losses yesterday and Asia ex-Japan CDS spreads continue to tighten rapidly following easing of Huarong’s concerns, down 5.8bp. 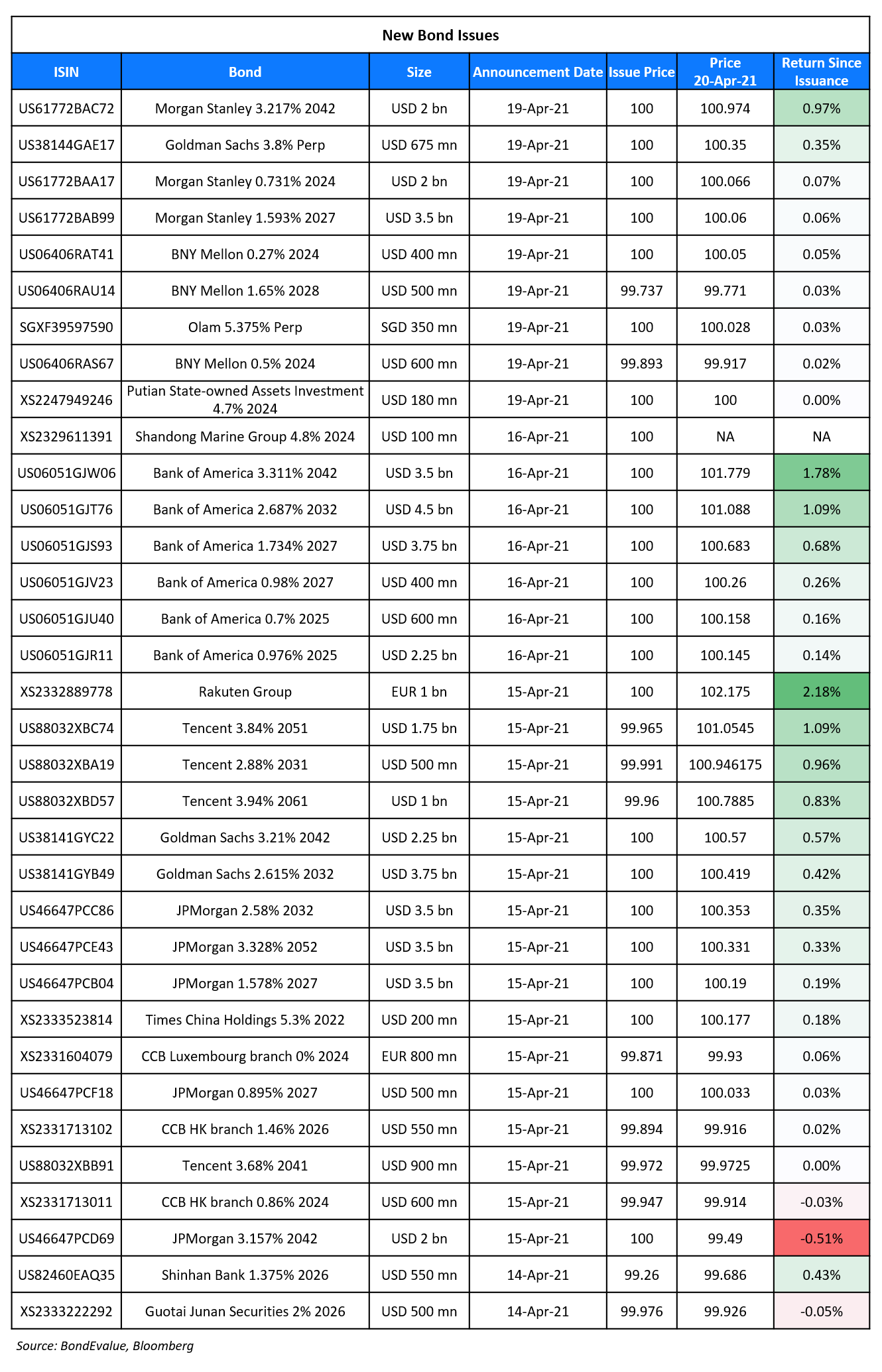 Olam raised S$100mn via a tap of their 5.375% subordinated Perpetual non-call 2026s at a yield of 5.375%, unchanged from initial guidance of 5.375% area. Proceeds from the unrated notes will be used for debt refinancing and/or other purposes. If the notes are not called in 2026, the coupon will reset to the original 480.7bp spread over 5Y SOR plus a step-up by 200bp. The coupon will reset every five years thereafter.

Goldman Sachs raised $675mn via a Perpetual non-call 5Y (PerpNC5) at a yield of 3.8%, 57.5bp inside initial guidance of 4.375% area. The bonds have expected ratings of Ba1/BB/BBB-. The bonds are callable every 6 months starting May 10, 2026 and if not called on that date, the coupon resets to the 5Y US Treasury yield + 296.9bp. Proceeds will be used to redeem all of their outstanding Series N preferred stock.

Putian State-owned Assets Investment raised $180mn via a 3Y bond at a yield of 4.7%, 30bp inside initial guidance of 5% area. The bonds have expected ratings of BB+ and proceeds will be used for investments in domestic project construction and working capital purposes. The issuer is wholly-owned by the government of Putian municipality of China’s Fujian province. The issuer engages in infrastructure and resettlement housing construction, real estate sales and commodity trading.

A ‘tap’ refers to a bond issuance wherein the issuer issues more of an existing bond rather than issue a new bond. Taps, also known as reopenings, are common in the bond market and can be quoted as a price or yield during the initial price guidance stage of issuance.

“The tail risks exist because there is a good chance that core PCE will trend well above 2% over the next one to two years, which may necessitate a more rapid hiking cycle,” Williams wrote. “We don’t think the bull flattening trend is sustainable in the front-end of the curve in the short-run.”
On US government bond investors left bewildered by ‘bonkers’ market move
Mike Riddell, a portfolio manager at Allianz Global Investors
“The market has decided that we’re priced correctly, and people are testing the upside and downside,” Riddell said.
Richard McGuire, head of rates strategy for Rabobank
“We’re spending so much time talking about what the hell is happening,” said McGuire. “That in itself is the point. There is so much uncertainty out there.”
In a note by analysts at TD Securities
“The rally in rates on Thursday may have been partly driven by fast money unwinding of shorts,” they wrote.
Tim Magnusson, senior portfolio manager at Garda Capital Partners
“In a bear market you can get sharp bull market rallies, and I would characterise this as one of those,” said Magnusson. “If you fast forward a few months down the road, you will see higher Treasury yields than we have today.”
Ian Lyngen, analyst at BMO Capital Markets
“The inclination of Japanese investors to push the next leg of rally promises to be a defining characteristic of the price action over the coming weeks, and we will be especially intrigued to see how willing this critical participant in the US rates market was to add Treasuries,” he said.
Mark Kiesel, chief investment officer for global credit at Pimco
“If the economic data is extremely strong over the next several months you could see the Fed change their tune,” said Kiesel. “Let’s say the US economic recovery . . . is so strong, the vaccines are successful and this creates significant momentum in the overall global economy that you actually do start to build in more inflation risk premium and the Fed has to start preparing the market for a taper.”
David Kelly, chief global strategist at JPMorgan Asset Management
“Ultimately the economy that is going to exist in a year’s time is not one that can support 10-year Treasury yields below 2 per cent,” he said.
On global derivatives market embracing pact to preempt Libor pain
Tom Wipf, chair of the Alternative Reference Rates Committee
“The ISDA protocol has been a resounding success in de-risking the derivatives market,” said Wipf. “People’s biggest concern was asymmetric take-up. There are very few household names or big players in the market that haven’t adhered.”
Anne Beaumont, a partner at law firm Friedman Kaplan Seiler & Adelman LLP
Some hedge funds “may still be doing the math to figure how they feel about it,” said Beaumont. “If you’re an investment manager, you have a fiduciary duty to not blindly amend your contracts.” “You’re going to want to at least go through the process of evaluating what the process means,” she added.
On Wall Street banks locking in low rates with barrage of bond sales
Jon Curran, portfolio manager at Aberdeen Standard Investments
“Maybe this is the new style of bank debt deals,” Curran said. “It’s certainly possible and plausible, particularly if execution remains good.”
Arnold Kakuda, senior analyst at Bloomberg Intelligence
“You typically want to issue when you can, and not wait until you really need it,” said Kakuda. 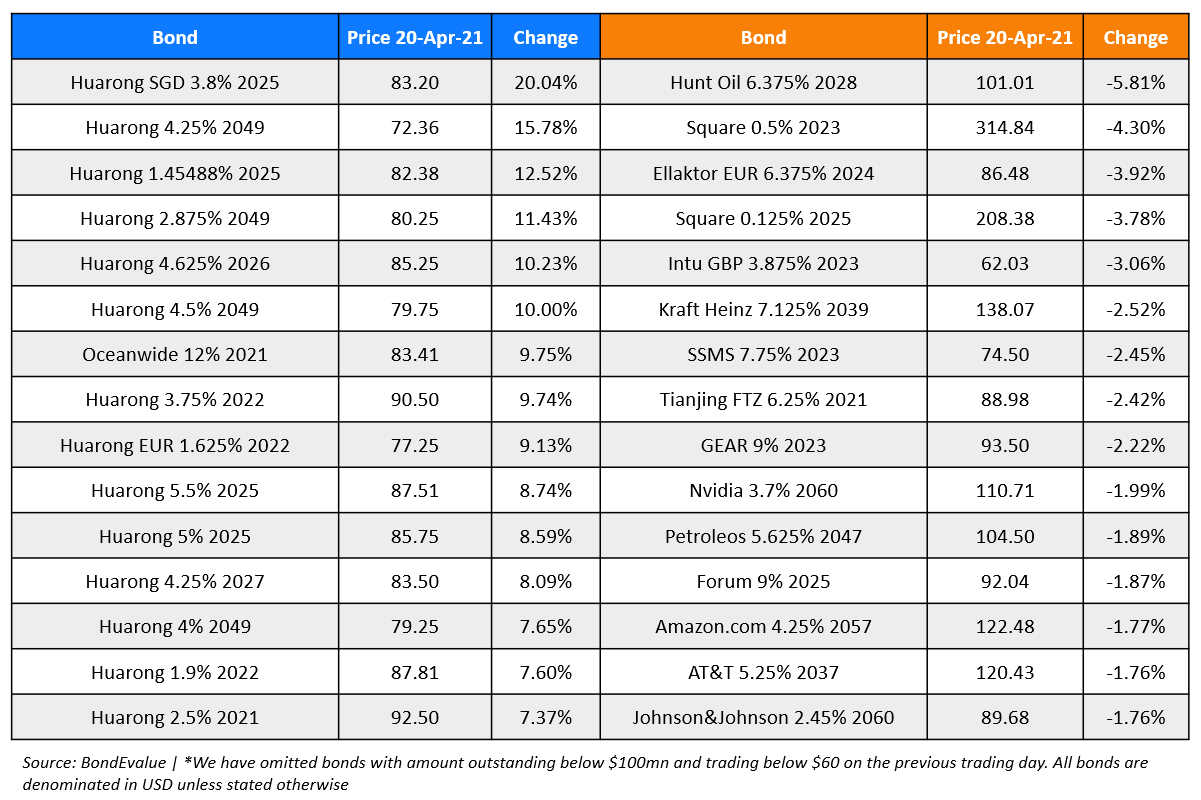