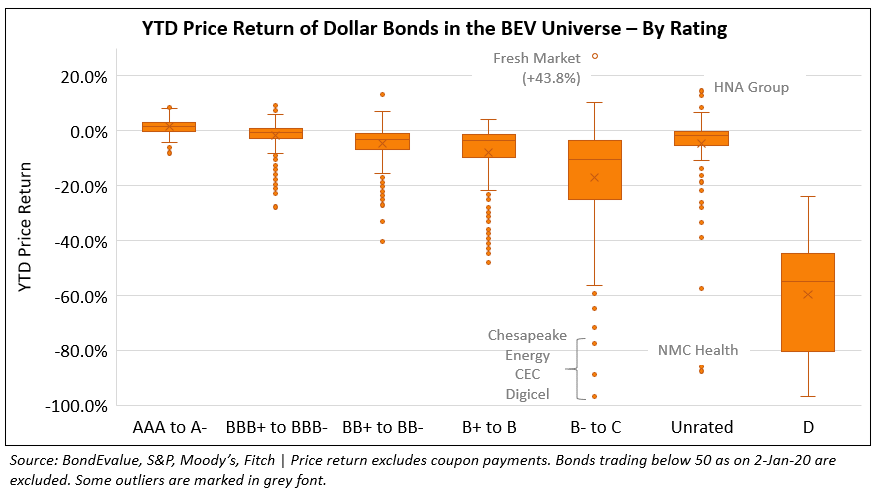 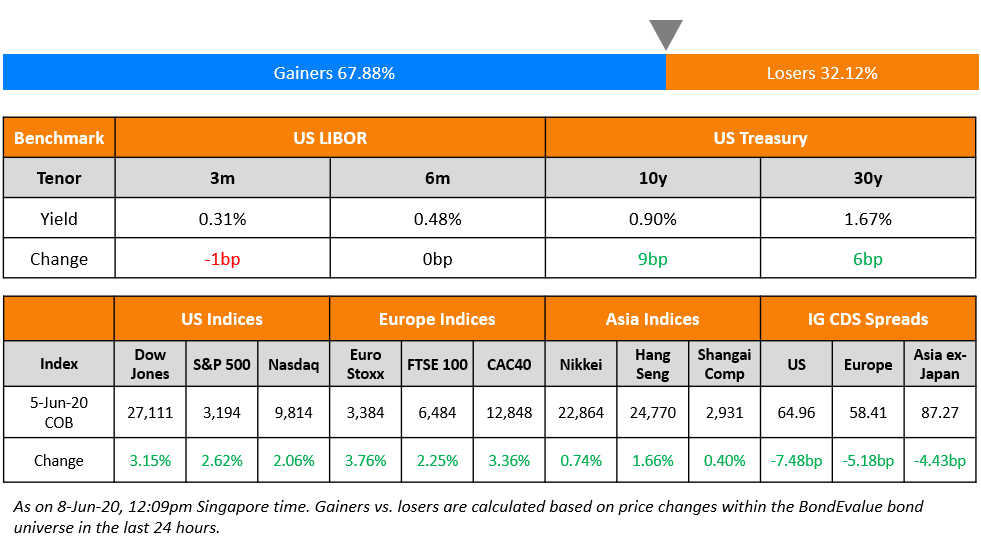 31% of dollar bonds in our universe are trading higher today vs. the start of the year (full story below).
Friday’s Non-Farm Payroll (NFP) number of +2.5mn vs. an expected -7.5mn gave a 10mn upside surprise that caused a sharp rally in equity markets and sell-off in US treasuries. The DJI and S&P surged 3.15% and 2.62% to close just 5.7% and 8.3% below their all-time highs, while the Nasdaq’s 2.06% up move left it just a bit shy of its all-time high. The rally caused US treasury yields to climb with the 10-year yield higher by 9bp at 0.90%. Asian dollar bonds finished last week for a sixth straight week higher and Asian stock markets are opening sharply higher off the Friday rally.

On Thursday last week, the Initial Jobless claims of 1.88mn brought the total number of jobless claims initiated since the lockdowns began in mid-March to almost 43mn. So the surprise NFP number indicates that, although there are new jobless claims, there are many who are getting back to work. This is what economists missed – some of those workers who had filed unemployment claims were starting to go back to work – likely because there wasn’t much good data on that.

Along with the NFP surprise, the unemployment number also came in at 13.3% which was lower than the 20% that was widely expected. The BLS report included a note at the bottom saying there had been a major “error” indicating that the unemployment rate likely should be higher than the widely reported 13.3%, and would be closer to about 16.3%. In short, some people who should have been classified as unemployed were instead classified as employed but “absent” from work for “other reasons.” This “other reason” category is normally used for people on vacation, serving jury duty or taking leave to care of a child or relative. But in this unusual pandemic circumstance, the “other reason” category was applied to some people who were sitting at home and waiting to be called back. The same thing happened in April, which would have added nearly another 5% to the 14.7% unemployment rate, the agency said. 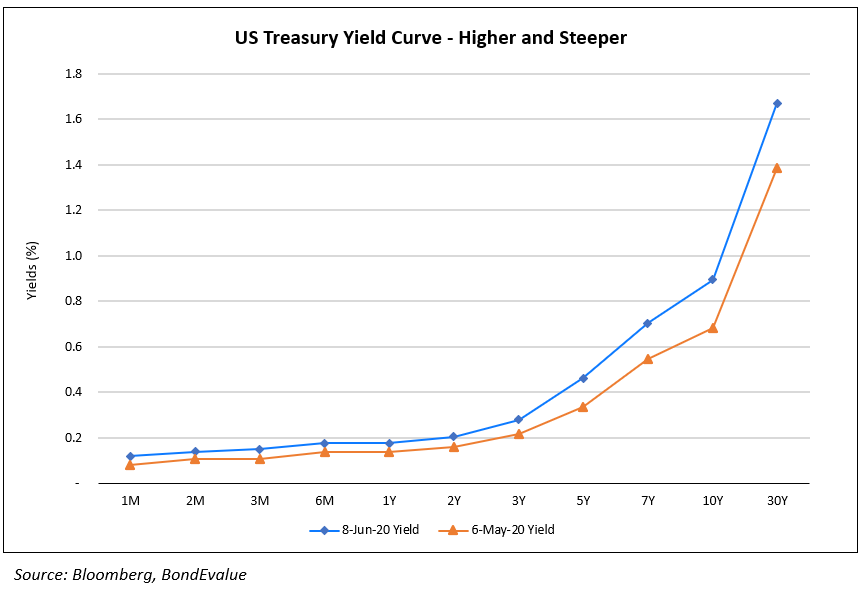 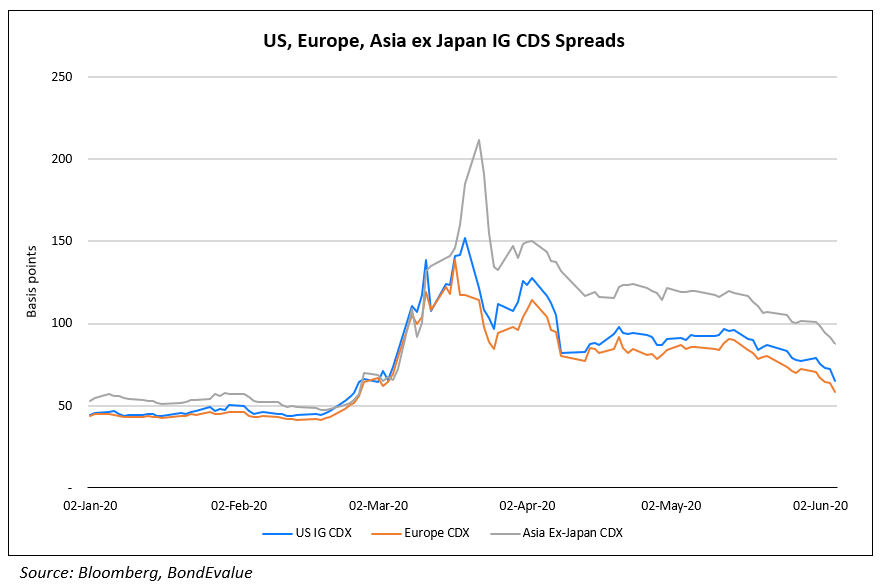 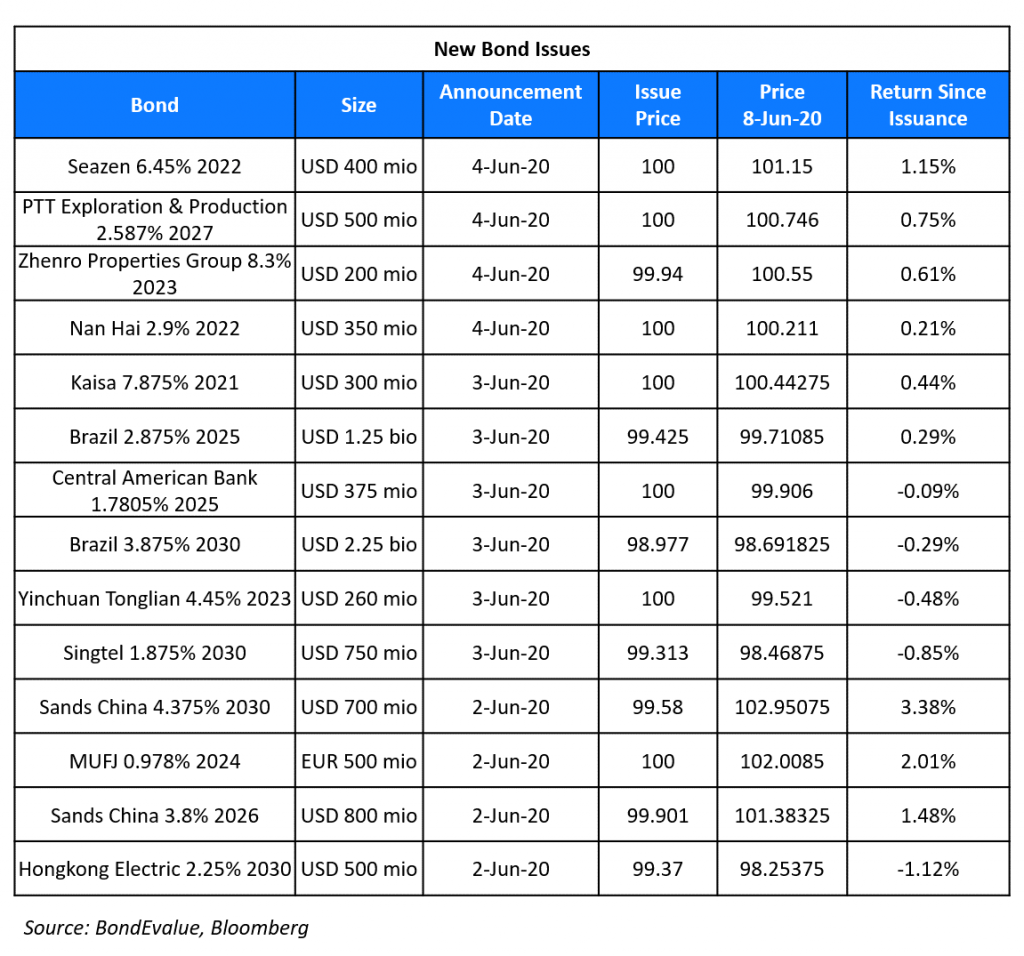 31.2% of Dollar Bonds in the BEV Universe Delivered a Positive YTD Price Return vs. 70.9% with a Negative Price Return

Given the recent risk-on sentiment in the markets, we compared prices of dollar bonds within our universe between Jan 2 and Jun 5 this year (year-to-date YTD). 31.2% of the bonds have delivered a positive price return (ex-coupon) to investors vs. 70.9% of the bonds that delivered a negative price return. We further analyzed the price return by ratings, plotted on a box and whisker plot below. Each orange box represents the mid 50% of the data for that rating category with the median as the line and the mean as the cross inside the box. The whiskers are the T-shaped areas above and below the box, representing the upper and lower extreme. Orange dots that fall outside the box and whisker are outliers. 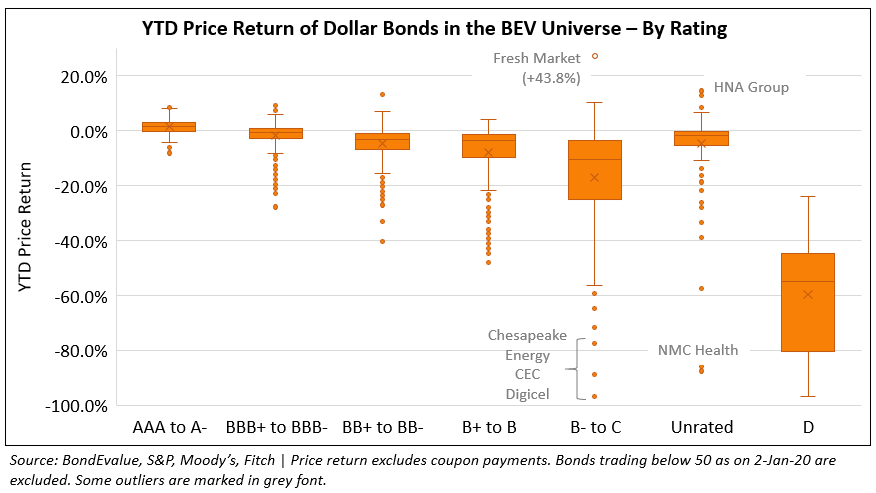 As can be expected, higher rated bonds witnessed lesser variance as compared to lower rated bonds. We have identified some of the outliers, marked in grey font. The table below summarizes the bonds that delivered a positive price price return YTD by rating. 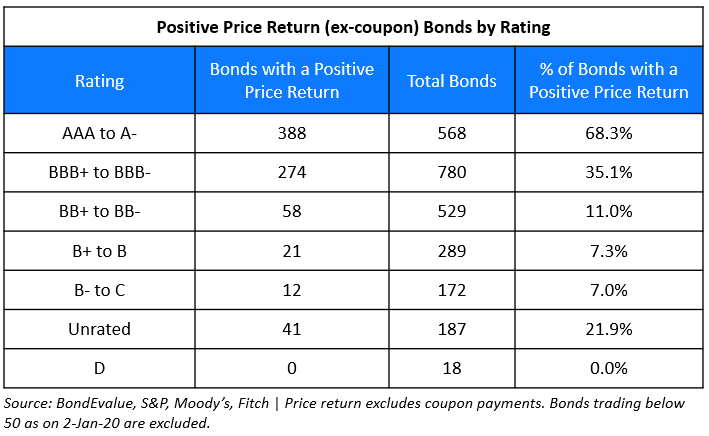 The flag carrier of South Korea, Korean Air is set to have liquidity worth one trillion won ($828 million) infused through the issue of government-guaranteed bonds, reported Yonhap. The airline, which is among the top global airlines has had muted operations like any other airlines in the world as an aftermath of the pandemic. The cash-starved carrier had received 1.2 trillion won from Korean Development Bank and Export-Import Bank of Korea earlier this year. The carrier has to furnish a 3.3 trillion won debt due this year and the amount could swell by another 700 million if the hybrid bond investors opt for an early redemption. The issue of bonds worth one trillion won are likely to provide Korean Air with much needed liquidity and is in line with the overall objective of the South Korean government to bail out companies from seven key industries including the airline industry.

In related news, Singapore Airlines raised $8.8 billion via a rights issue on Jun 5 and $900 million through long-term loans.

Bharti Airtel is the third largest player in the Indian telecom space and has faced rising competition from Reliance Jio, which has forced it to re-think its strategy. With Reliance Jio having projected itself as a digital platform rather than just being a telecom player, it is widely felt that Airtel is playing catch-up with Jio. On Jun 4, Reuters had reported that Amazon was looking for a $2 billion investment worth a 5% stake in the telecom major. However, Bharti Airtel was quick to respond and termed the report as speculative on Jun 5. A similar sentiment was also echoed by an Amazon spokeswoman by not offering any comments on the speculation, reported CNBC. The Indian telecom sector has seen rising interest from investors and the bonds of telecom players have risen to pre-pandemic levels. The incumbents have had a series of fund raises with Reliance Jio leading with investments from Facebook and other players including KKR, Vista Equity, Silver Lake, General Atlantic, Mubadala and most recently,Abu Dhabi Investment Authority. Google was in initial talks to buy a 5% stake in Vodafone Idea as reported by ET on May 29. Bharti Telecom itself raised $1.1 billion by selling a 2.75% stake to investors including Fidelity and Black Rock. 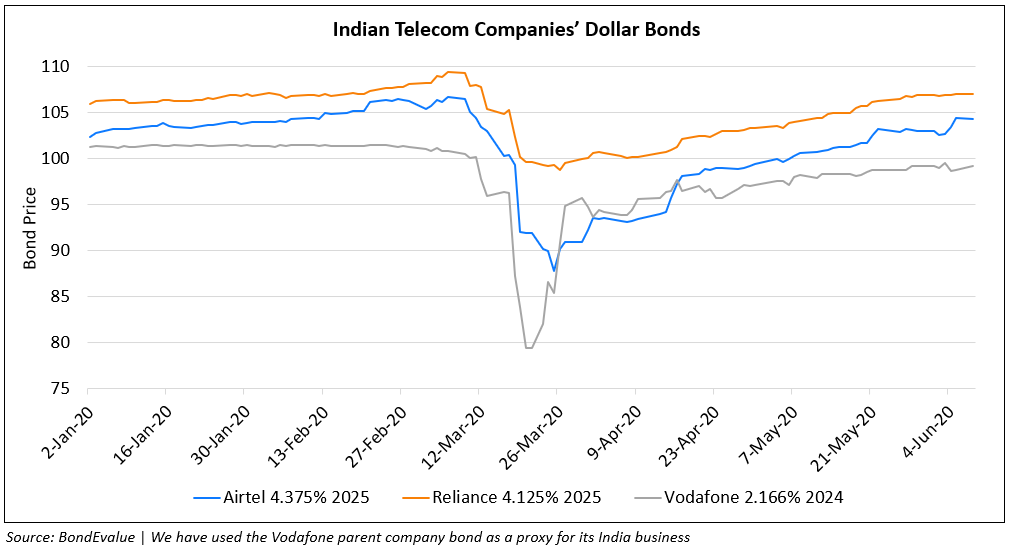 Credit differentiation between various local government financing vehicles – LGFVs – in China has gained importance, as divergence has widened and made non-core entities more vulnerable to rising default risk, experts said. LGFVs became popular after a law banning local governments in China from direct borrowing came into force in 1994. These entities provide finance for local governments to construct public social welfare infrastructure and develop land, with the primary aim of undertaking government functions rather than seeking profits.

But as the government clamped down on shadow banking, which is subject to less regulatory oversight than mainstream banking, and as economic uncertainties intensified, the gap in their fundamentals has widened. “If you want to invest in LGFVs, the first step is to understand the credit worthiness of the local government,” Jonathan Hu, the CEO at Pengyuan International, said.

Non-Farm Payrolls (NFP) is a key data point that is released by the US Bureau of Labor Statistics (BLS) usually on the first Friday of every month. NFP measures net changes in employment excluding agricultural, local government, private household and not-for-profit sectors over the past month and is a key economic indicator in the United States. A high reading of the NFP is considered a positive sign for the US economy while a negative reading is considered a sign of a slowdown in the US jobs market. The NFP indicator is closely watched by traders, especially as it is one of the first monthly economic indicators to be released, and because of the direct relationship between job creation and interest rates, and hence economic growth.

Kiesel says that “In the past two months, it felt like credit was extremely attractive, we called it a nine on a scale from one to 10. And the reason was a lot of stimulus coming in the system, basically unprecedented monetary stimulus, as well as government support.” He highlighted that the announcement made by the Federal Reserve on March 23 to safeguard the US economy, would lead to a blockbuster corporate bond purchasing programme. 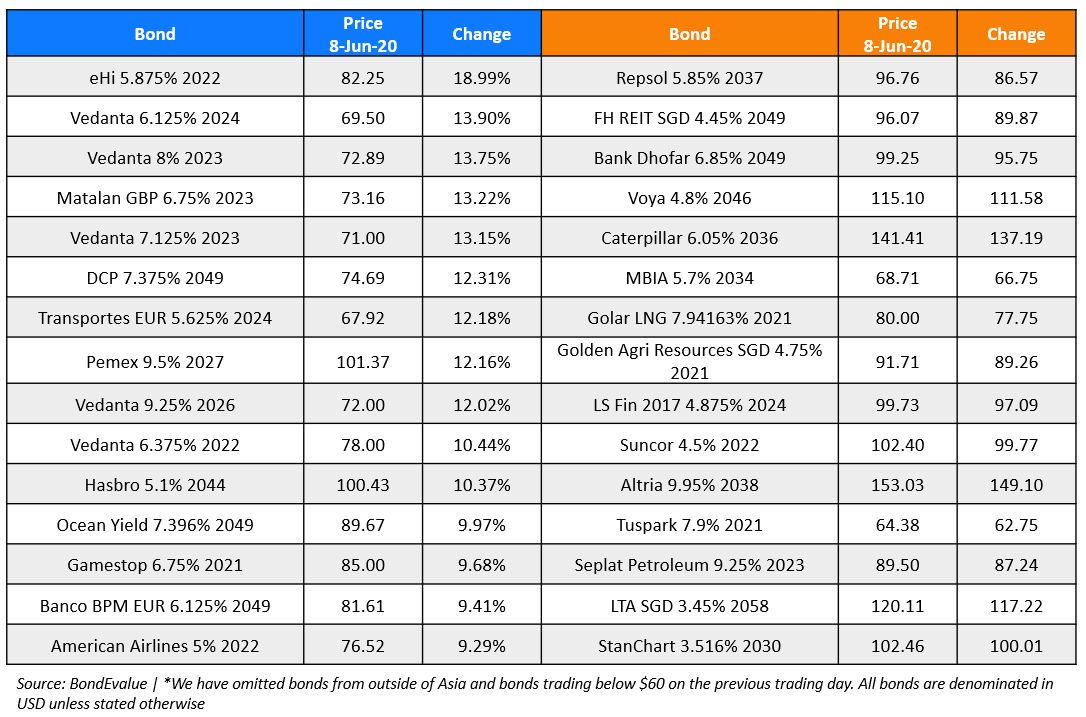