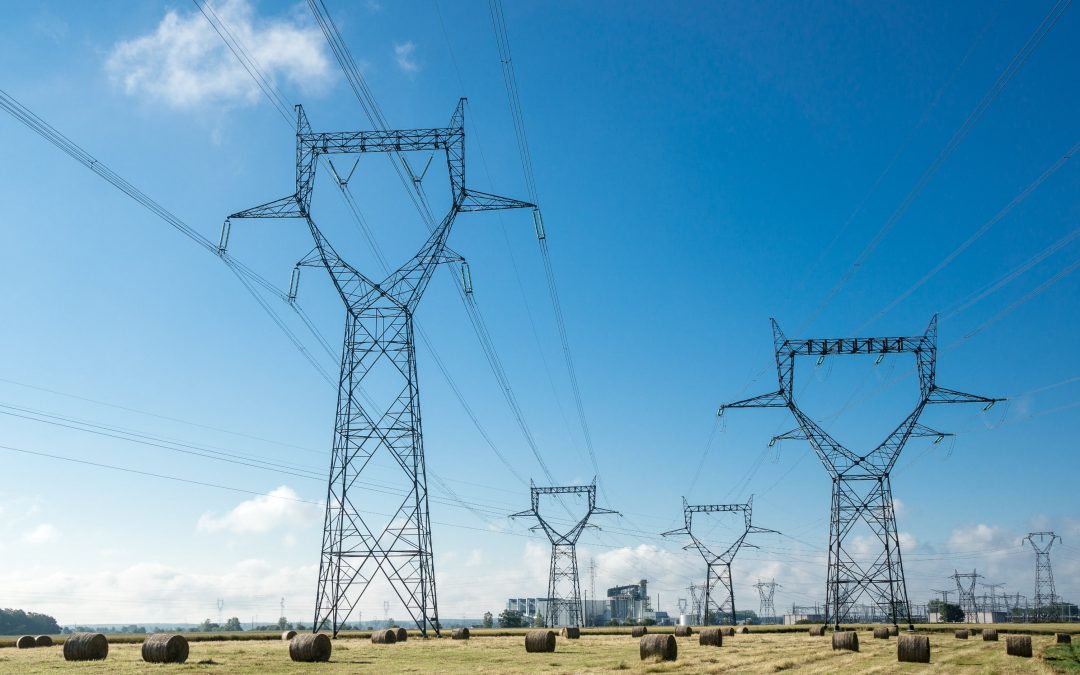 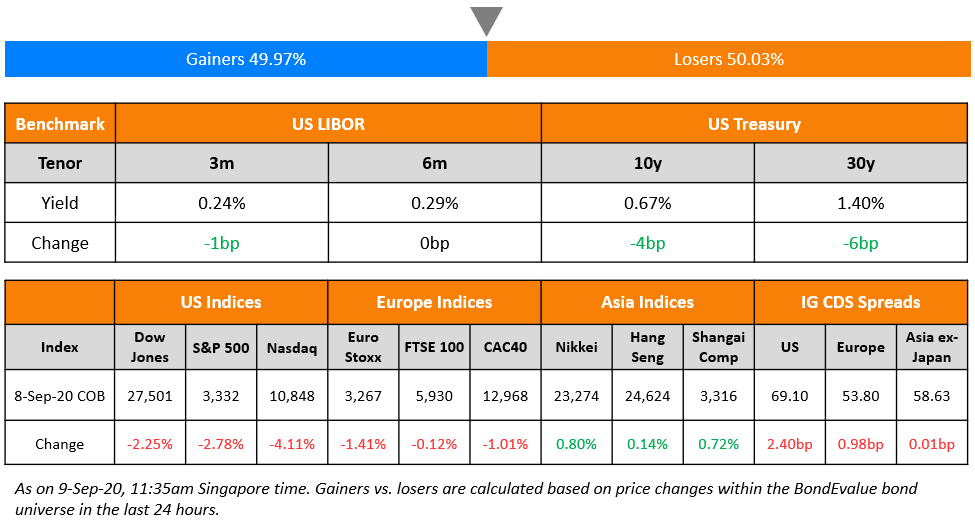 Technology stocks led a sharp sell-off overnight. Investors in the US returned after the Labor Day holiday feeling bearish and in the mood for profit taking mostly because of the news that SoftBank’s option purchases helped to trigger the recent rally. Nasdaq declined 4.11% led by the massive decline of 21.1% in Tesla and declines of 4.1%, 4.4%, 5.4% and 6.7% in Facebook, Amazon, Microsoft and Apple respectively. A drop in oil below $40 per barrel caused sizable losses in the energy sector. A probe by JP Morgan into employee misuse of Covid-19 relief funds also stressed the financial sector. These led to a 2.25% and 2.78% decline in the DJI and S&P. European shares were also hit and were down around 1%-1.8%. Treasury bonds saw some safe haven demand and yields were down 1-4bp. IG CDS spreads widened on the risk-off move and concerns are increasing that the equity sell-off could spill over. Asian markets except China are opening lower following the overnight sell-off. 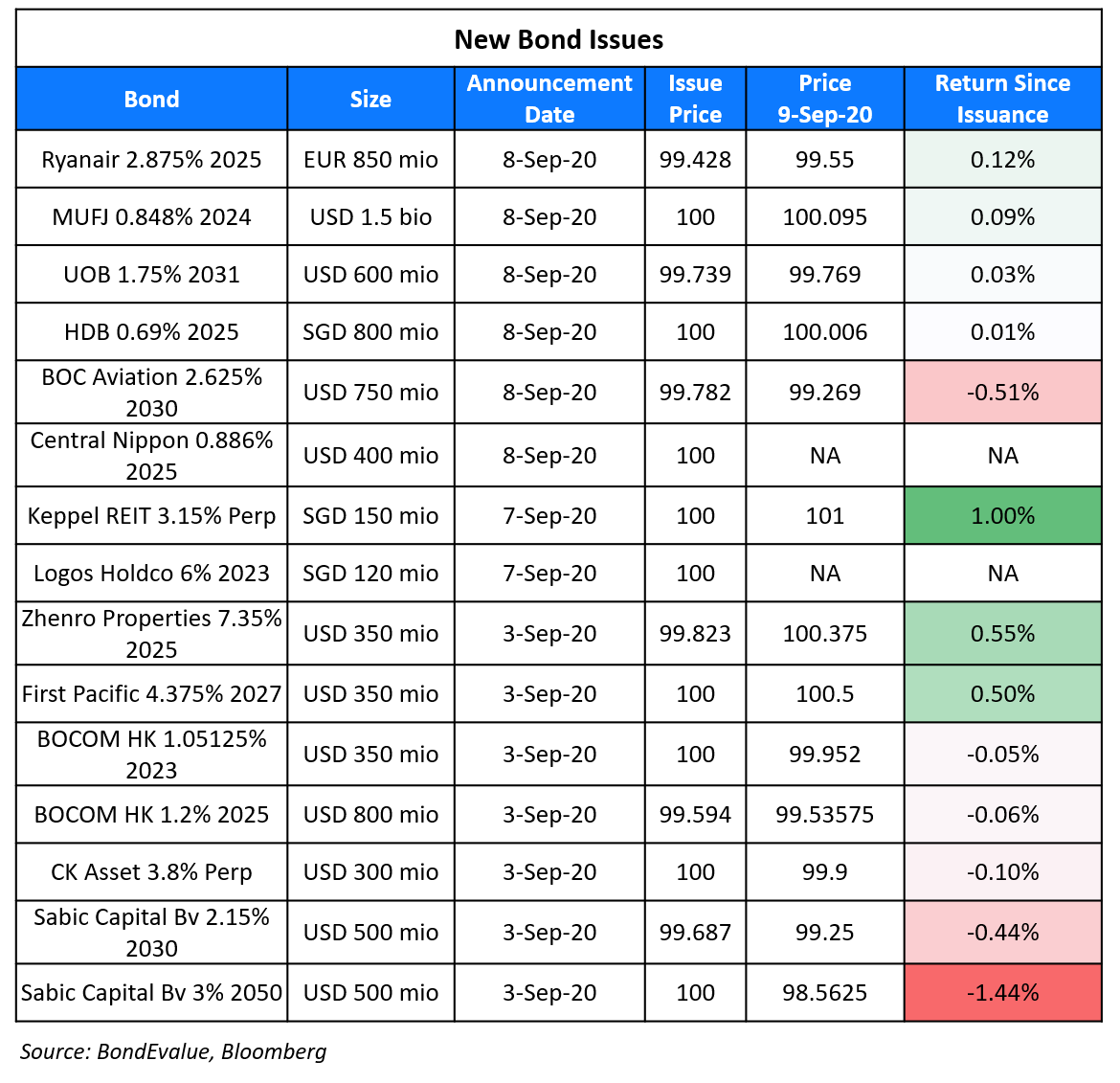 Mitsubishi UFJ Financial Group (MUFJ) raised $1.5bn via 4Y non-call 3Y (4NC3) to yield 0.848%, 68bp over Treasuries and 17-22bp inside initial guidance of 85bp–90bp area. The bonds are rated A-. The bonds have a one-time issuer call option in 2025. If not redeemed, the coupon will reset thereafter to the then prevailing one-year US Treasury plus the initial spread of 68bp.

Ryanair raised EUR 850mn via 5Y bonds to yield 3%, 75bp inside initial guidance of 3.75% area. The bonds, with expected ratings of BBB/BBB, received final orders exceeding EUR 3.75bn, a bid-to-cover ratio (Term of the day, explained below) of 4.69x.

The Singapore statutory board Housing and Development Board (HDB) raised S$800mn ($584.9mn) via 5Y bonds to yield 0.69%, the lowest coupon ever issued by the HDB. The new bonds offer a new issue premium of ~2bp over its 5Y bonds issued in May last year. The older bonds are currently yielding 0.67% on the secondary markets.

Japan’s state-owned Central Nippon Expressway raised $400mn via 5Y to yield 0.886%, at mid-swaps plus 53bp over Mid-swap and inside initial guidance of MS+ low 50bp area.

Fitch Affirms Yango at ‘B+’/Stable; Upgrades Senior Unsecured Rating to ‘B+’ from ‘B’

EDF plans to use proceeds from the green convertible to meet its goal of doubling net-installed renewable energy capacity from 2015 through 2030. The state will buy as much as €960mn of the green convertibles. The two perpetuals, expected to be rated Baa3/BB-/BBB, received total orders worth €5.1bn, ~2.4x issue size. EDF’s shares traded lower by 8% on Tuesday as the convertibles would dilute existing shareholders’ equity.

The bonds of Brazil’s largest domestic airline, GOL Linhas Aereas Inteligentes inched up after the airline announced its preliminary traffic figures. Although the international routes, which connect Brazil in South America as well as to the Caribbean and the US remained shut, the domestic traffic was seen to pick up in August.

Earlier this month, Delta Airlines helped GOL in refinancing its $300mn debt incurred in 2015 by providing a guarantee, which allowed GOL to get a better interest rate on its new debt. GOL’s 8.75% perpetual and 7% bonds 2025 have risen by over 20% since the debt refinancing news last week. The bonds traded at 57.2 and 67.75 cents on the dollar, up 1.94 and 3.28 points respectively. 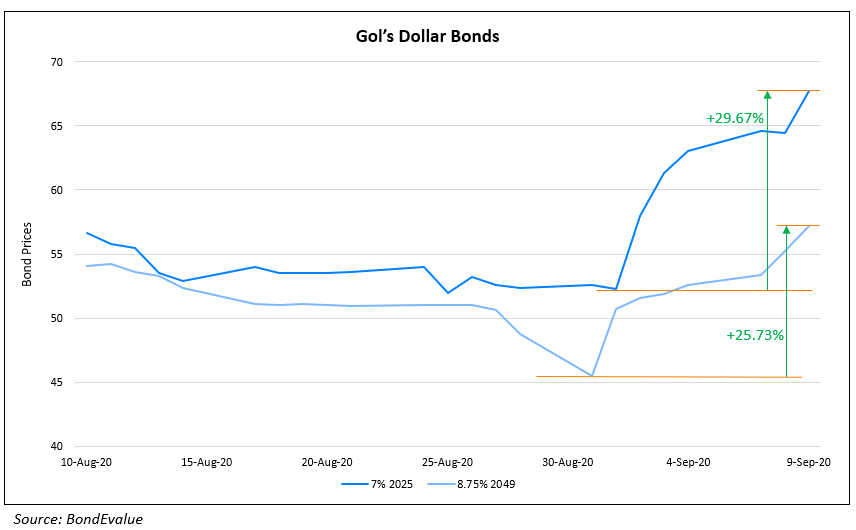 The sharp correction in US tech stocks on Tuesday weighed on Softbank’s stock and bonds after revelations of the Japanese conglomerate taking massive bets on US stocks via derivatives. Softbank’s stock is trading lower by 6% this morning to ~JPY 5,500, taking this week’s correction to 13% so far for the company. Its bonds have not been spared either, falling 2-3 points since last Friday’s close. Amir Anvarzadeh, a market strategist at Asymmetric Advisors in Singapore who has been covering SoftBank since it went public in 1994, said, “Son is a speculator — not this visionary everyone claims he is. This is yet another proof of that, as he is never too far from the action when a bubble is formed.” Adding to the bad news for investors in the Tokyo-headquartered company, Softbank’s Chief Compliance Officer, Chad Fentress has left the company. This comes just a month after its global government’s officer Ziad Ojakli left the company. Both Fentress and Ojakli had joined the company in 2018. 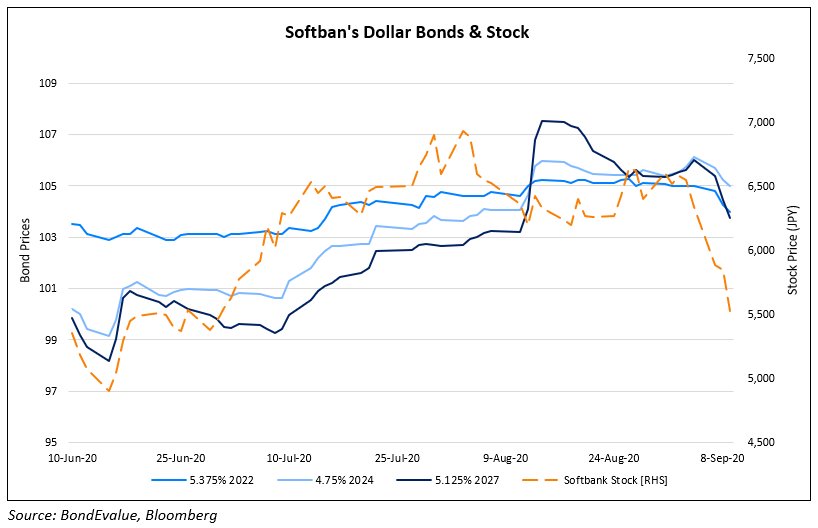 Bid-to-cover is a ratio of the number of bids or orders received for a particular security issuance vs. the amount issued. The bid-to-cover ratio indicates the demand for an issuance – higher the ratio, higher the demand and vice versa.

“The easy part of the post-pandemic spread tightening is largely over for most credit risk assets. With the large monetary and fiscal stimulus already largely priced in, we believe the grind tighter in spreads will be much slower, if at all,” wrote McAlinden.

On the cooling off in US rally in investment-grade credit – Scott Thiel, Chief Fixed Income Strategist at BlackRock

The market is “looking for more policy decisions and more money coming into the economy,” Scott Thiel said in an interview. “When we look at it from a valuation and policy perspective, as a return asset class, investment-grade credit doesn’t look as attractive as it did when we initiated the long” in late March and early April, he said.

“For the ECB, trying to weaken the euro is an increasingly Sisyphean task,” said Kinsella. “It’s one thing for Lagarde to talk the euro down this week, but it’s less clear what they can actually do.”

“The ECB has a huge challenge ahead in terms of containing euro strength against the dollar under the new Fed approach,” said Guha, and that the ECB had to “watch that US policy is not adversely affecting our own eurozone recovery”, adding: “I hope the governing council is not overly rigid in deciding and implementing the strategic review.”

“Verbal intervention lasts a day or two, but then the market is back to focusing on policy,” said Brzezniak. “On that front, I’m not sure there’s all that much they can do” to weaken the euro, he said.

“It’s foolhardy to believe that one can have this kind of a shock to an economy and it just gets healed through a one-shot deal” from the Treasury, he said.

“If the tech rout was due to stronger growth and a rotation into cyclicals, Treasuries would be selling off right now,” said Seema Shah, chief strategist at Principal Global Investors. “The fact that they are rallying suggests the tech rout has to do with fundamental concerns about geopolitics and global growth. At these market valuations, any factor that has the potential to disrupt the global growth outlook is going to send investors rushing for safe havens,” Shah said.

On a new “age of disorder” ending the best run for stocks and bonds since 1800s – Jim Reid, Deutsche Bank strategist

“While these themes have been around for some time, it is only recently that they have begun to feed off each other to hasten the demise of the second era of globalization that markets have been in since 1980,” Reid said, referring to higher debt levels, the climate debate and worsening U.S.-China relations as additional risks.

“From a flow perspective, FTSE will likely be the most impactful index since it has a large AUM tracking this index … its investors base is very passive and comprises just government bonds,” they said.

“Chinese regulators also have a very positive attitude to push forward for inclusion. (And) when we have more participation from foreign investors into the bond market, index service companies will have a very strong incentive,” said Zhu. 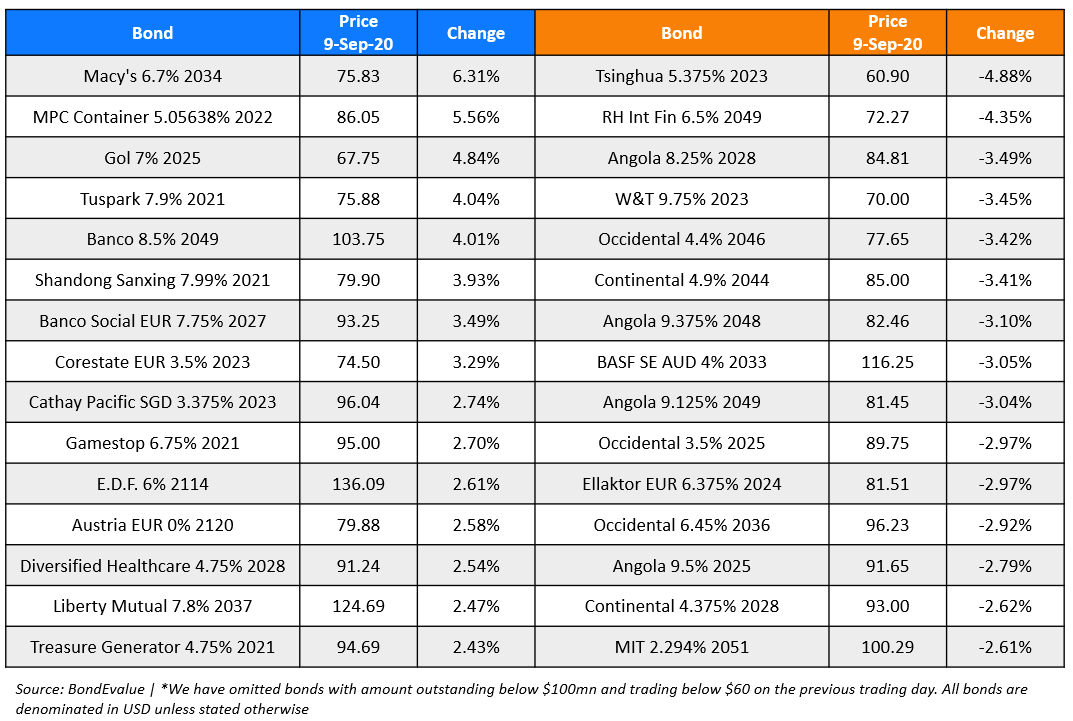