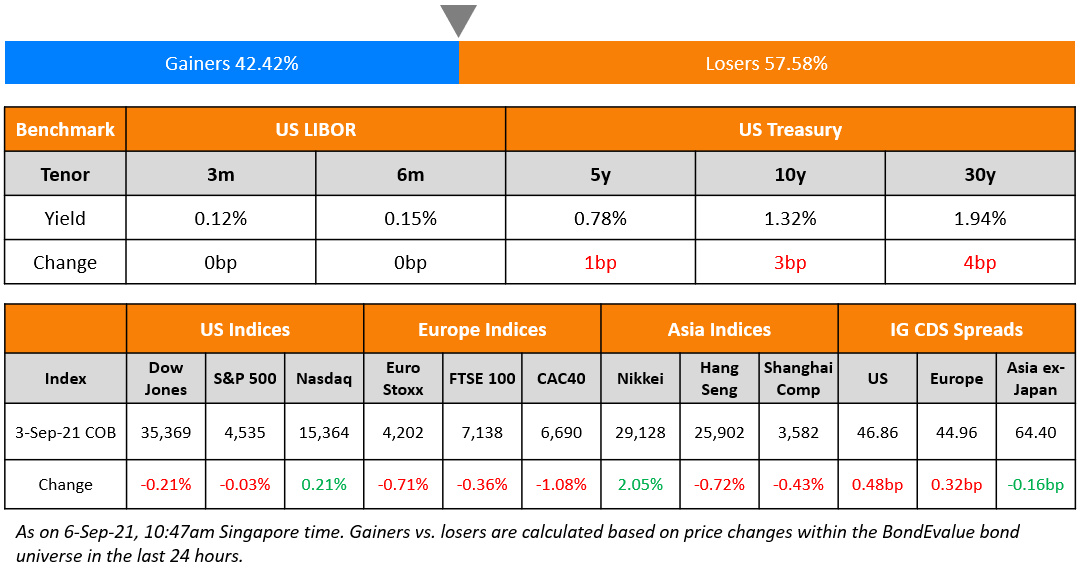 US markets ended the week mixed before the long labor day weekend and after a disappointing Non Farm Payroll report – Nasdaq gained 0.2% buoyed by tech stocks while S&P was broadly flat. IT up 0.4% was the only sector with some significant gains, Utilities, Materials, Industrials, Financials and Energy were down more than 0.5%. European markets moved lower – CAC was down 1.1% and FTSE and DAX were down 0.4%. UAE’s ADX was down 0.2% while Saudi’s TASI ended 0.1% higher. Brazil’s Bovespa gained 0.2%. Asian markets had a mixed start – Nikkei, Shanghai and HSI were up 1.6%, 0.4% and 0.2% in early trading, while KOSPI and Singapore’s STI were down 0.1% and 0.2% respectively. US 10Y Treasury yields climbed 3bp to 1.32% after the lower than expected jobs report. US IG CDS spreads and HY spread widened 0.5bp and 0.8bp respectively. EU Main CDS and Crossover CDS spreads widened by 0.3bp and 1.9bp respectively. Asia ex-Japan CDS spreads tightened 0.2bp.
The US reported a rise of 235k in the total non-farm payrolls in August, much lower than expectations of 720k and vs. 943k last month. The average monthly job growth for this year has been 586k. The numbers did not meet expectations with employment in the leisure and hospitality sector remaining unchanged in August, after increasing by ~350k/month over the last 6 months. The employment in leisure and hospitality was 10% lower than pre-pandemic numbers in February 2020. The unemployment rate however dropped 0.2% to 5.2% MoM inline with expectations and the average hourly earnings YoY rose to 4.3% in August vs. 4.1% last year. Italian composite PMI for August posted 59.1 vs. 58.6 last month. German composite PMI posted 60 vs. 62.4 last month and lower than expectations of 60.6. UK’s composite PMI was slightly lower than expectations at 54.8 vs. 59.2 last month. 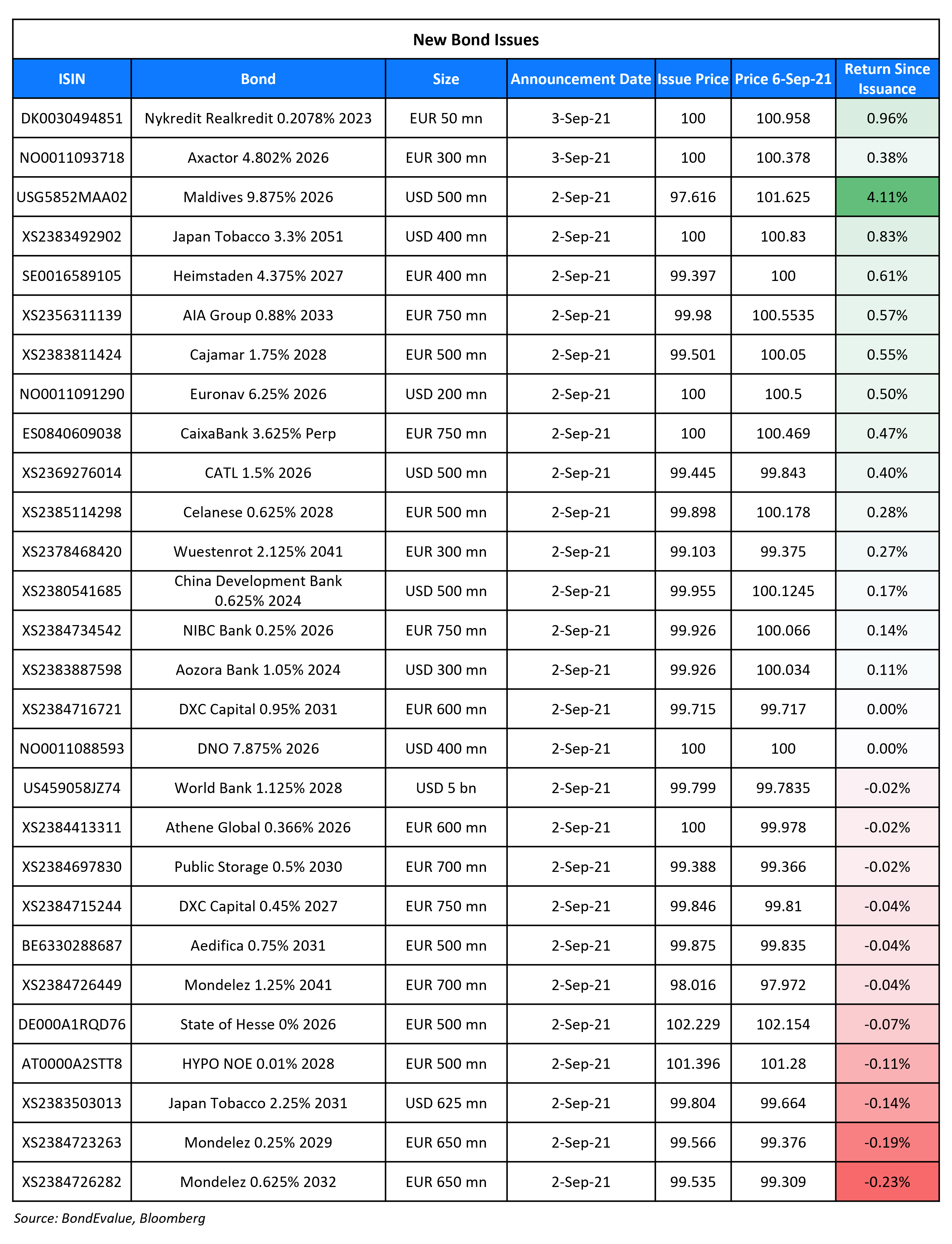 Solar bonds are bonds issued to help US individuals finance the purchase of rooftop solar panels to power their homes as per WSJ. The bonds are backed by a bundle of loans made to homeowners for for purchase of solar panels and are being issued by financing companies that specialize in residential solar power panels like GoodLeap, Sunnova Energy and Solar Mosaic. WSJ adds that solar bond issuances have hit $2bn in 1H2021 almost double the levels of 2019 and 2020.

On US bond sales to come roaring back after Labor Day
Hans Mikkelsen, Bank of America Corp.’s head of high-grade credit strategy
“With rates now going up we think issuers will see September as the last window to issue at these low coupons, which creates an incentive to continue to pull forward needs.”
John McAuley, co-head of debt capital markets for North America at Citigroup Inc

“This is the first year in a while where we’ve had good markets, a ton of committed pipeline ready to come out, as well as both a functioning bank loan and bond market,” he said. “A lot of new deals are coming in at the same time.” “It’s going to be higher for longer on deal volumes,” he said.

Trisha Taneja, head of ESG advisory for origination and advisory at Deutsche Bank
“Based on the way the pipeline is building, we could see a month for record issuance.” “This is typically the time that most issuers want to go to market, right after Labor Day.”
Ronald van Steenweghen, a fund manager at Degroof Petercam
“I feel there is cash available after summer to deploy and would not expect too much pressure on pricing.” “Most new sovereign issues have been well telegraphed in advance and demand remains very strong, partially due to regulatory changes.”
Jorge Garayo, senior rates strategist at Societe Generale SA

“I think everyone will try to have their own green bond, but the EU issuance is definitely what everyone should focus on.” “This month may be big because you have Germany and Spain, but it’s not going to be the biggest.”

On Euro junk bond yields below inflation for first time – Barnaby Martin, head of credit strategy at Bank of America

“If there’s one metric that defines or reflects how much investors need to reach for yield, it is this negative real yield backdrop.” “The irony is that even buying high yield debt doesn’t help you beat inflation in Europe at the moment. It really reflects how much the ECB is keeping a lid on fixed income.” “Your options are to buy things that yield more than 3% now. And that’s really difficult. Even in high yield that limits you to Single Bs, it limits you to Triple Cs.”
On buying opportunities in China’s high-yield market – Eric Liu, head of fixed income at Harvest Global Investment

According to Liu, there are firms “where you know they have cash, they have
financing channels and they can repay perfectly fine” and have become “a lot
more attractive to come in and buy.” “There are situations where the recovery rate is a lot higher than where the bond prices are because there’s no natural buyer at this stage.”

On Chinese officials pledging to tighten supervision in the financial services industry – Chen Yulu, deputy governor of the People’s Bank of China

“We will enhance the effectiveness and professionalism of financial regulation, build all kinds of firewalls to resolutely prevent systemic risks,” Chen said.

Buddhika Piyasena, head of Asia-Pacific at Fitch Ratings
“Lower rates have been an incentive for issuers, and for investors EM high-yielding debt has been attractive, given value considerations.” “There is some early refinancing happening as well, adding to volumes in 2021, with issuers wanting to take advantage of the today’s interest rate environment given possible Fed moves going forward.”
Chanakya Dissanayake, head of investment research at Acute Knowledge Partners
“The fundamentals of EM corporates still remain strong.”
Jose Perez-Gorozpe, head of credit research for emerging markets at S&P Global Ratings

“Issuers are taking advantage at still-favourable financing conditions to refinance their debt and cover future financing needs,” he said. “Delayed economic recoveries can be especially harmful for those entities linked to tourism and related services, which have not yet recovered.” “In Latin America, restaurants, airlines and airports, gaming, and leisure continue to suffer from the abrupt contraction in demand last year and likely won’t recover until immunisation programmes across the region.”

On emerging currencies in ‘sweet spot’ for carry trades

Christopher Shiells, an analyst at Informa Global Markets
“Emerging-market currencies may be in a sweet spot.”
James Barrineau, head of emerging-market debt at Schroder Investment
“Powell, at least at this juncture, seems to have managed a pro-EM taper  — something we never thought we would see.” “The key thing Powell did was to forcefully separate the taper discussion from the rate hike discussion. He indicated rate hikes are probably a long way away. That has resulted in a weaker dollar which is a strong positive for EM.”
Anders Faergemann, a money manager at PineBridge Investments
“EM central banks have already reacted to higher inflation and raised interest rates, creating a buffer should economic growth start to surprise on the downside next year.” “These countries have positive real rates already which would tend to support the exchange rates,” he said. 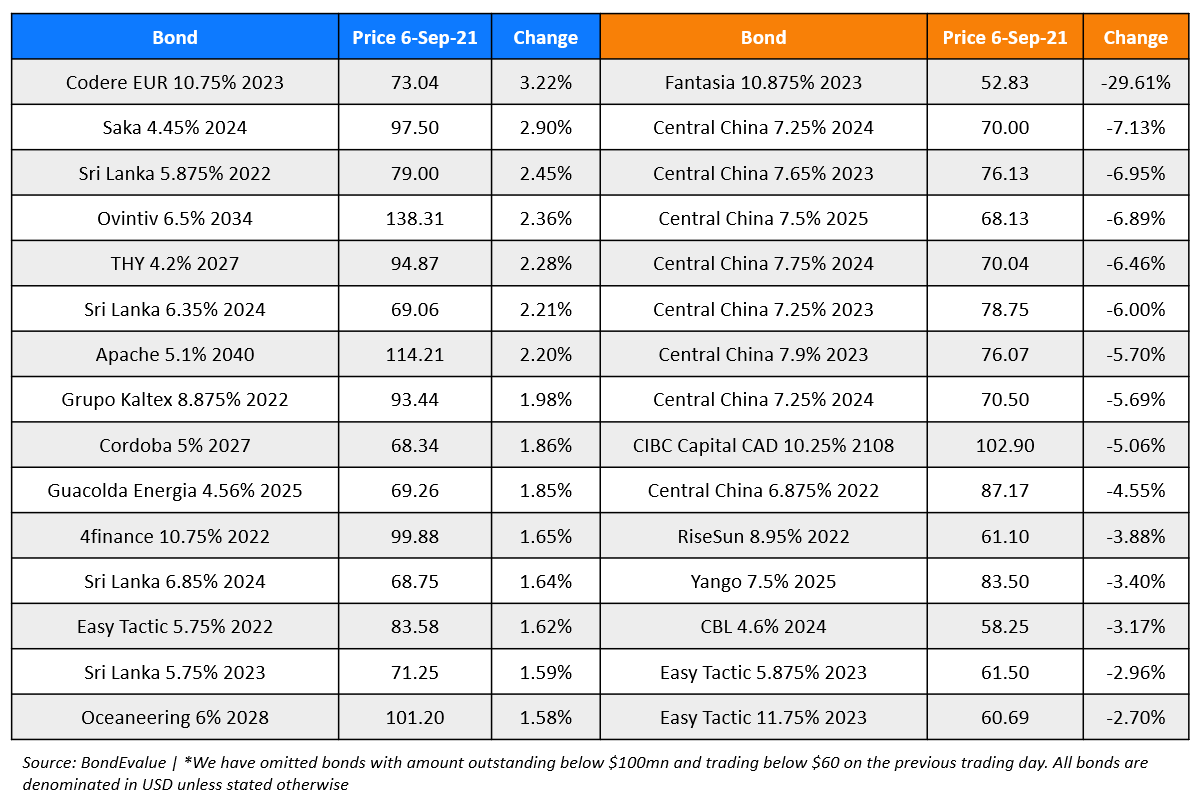