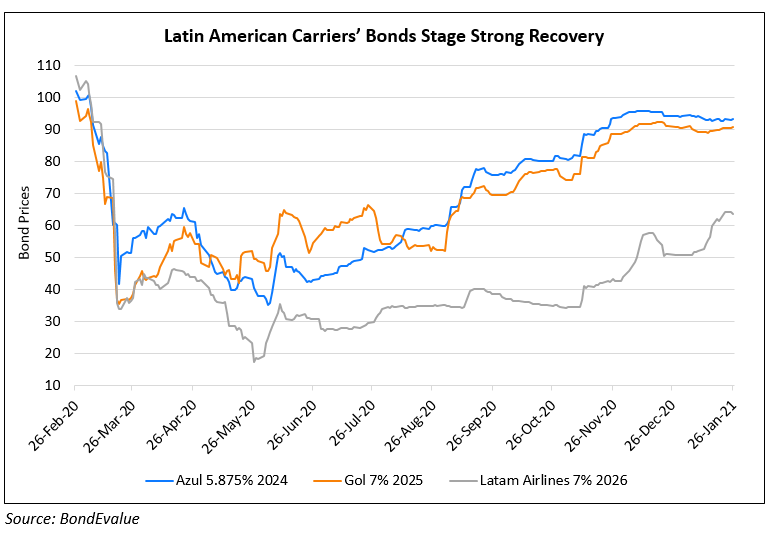 Latin American airlines Azul and Gol have seen their dollar bonds surge over 150% since June and March last year with the expected recovery in air travel on the back of initial vaccine rollouts and improved market sentiment. Azul’s 5.875% 2024s were trading at 36 cents in June 2020 and have since rallied to currently trade at 93 cents on the dollar. Similarly, Gol’s 7% 2025s were at 35 cents in March 2020 and have since risen to 90.4 cents on the dollar. At Azul, the pickup has been so sharp that it expects to be operating at higher capacity than pre-pandemic levels for local flights. Bloomberg reports that the rallies have particularly been surprising because of how little government support the industry has received. Even carriers like LatAm Airlines and Aeromexico that had filed for Chapter 11 bankruptcy protection in May/June last year have found value among investors, recovering from distressed levels in the 20s to the 60s and 40s respectively. Colombia’s Avianca though, has not seen much respite and continues to trade at deep distressed levels.

Bloomberg reports that even globally, Latin American airlines have been doing better with November 2020 passenger load at 74%, the highest in the world vs. the industry average of 58%. They also note that bonds issued by Mexico City Airport Trust (MCAT), issued to pay for a Mexico City airport that was never built, are trading above par as revenues from passenger fees at an existing airport that backs MCAT’s bonds have risen. Whilst Latin American bonds have run up considerably, market participants are wary of rising infections and deaths in many parts of the world, including Brazil, Mexico, Colombia and Peru. “Latin America, with attractive rates, becomes an interesting destination for investors,” said Luis Gonzali, a PM at Franklin Templeton. “Our expectation is that you’ll continue to see spread tightening… They’ve already rightsized appropriately or survived from a liquidity perspective” said Celina Apostolo Merrill of Blackrock.