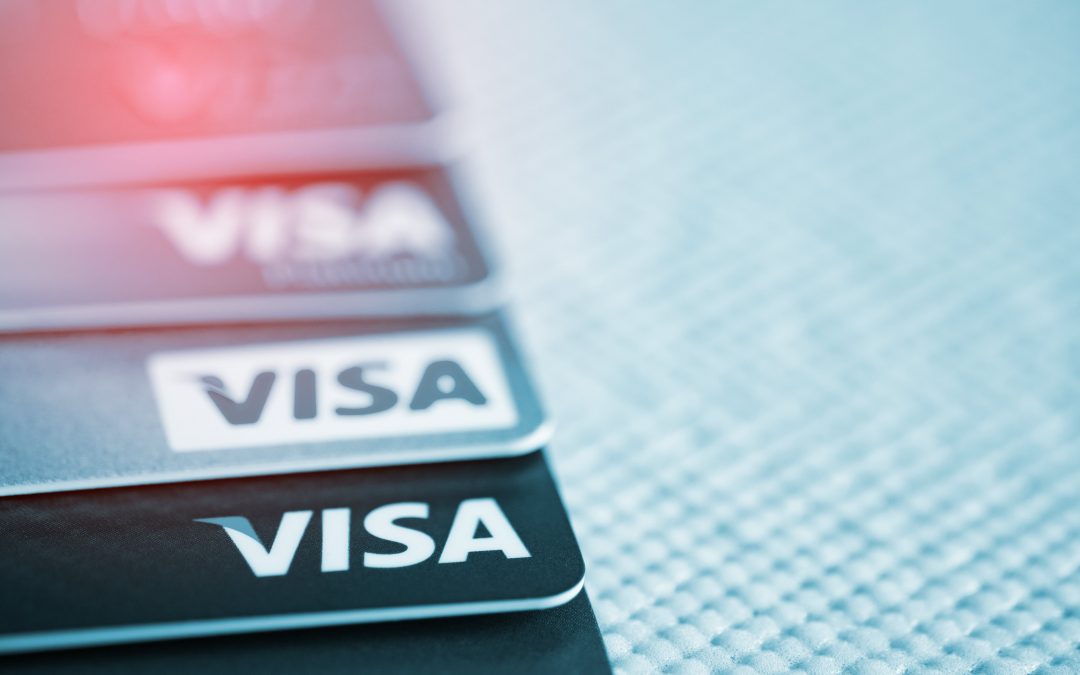 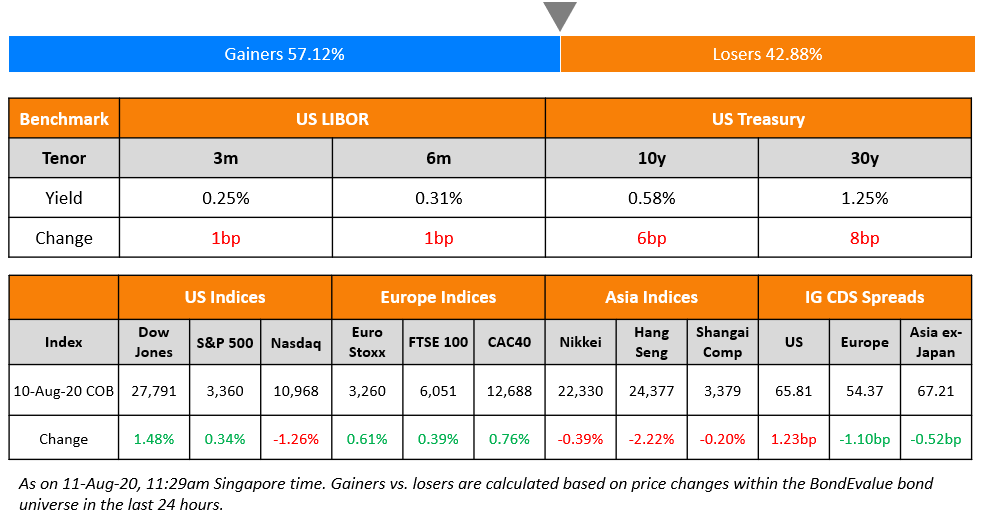 Markets in Asia are opening higher after a mixed session overnight on Wall Street that saw investors rotating out of elevated technology stocks into underperforming value sectors. The Dow Jones and S&P rallied but the Nasdaq was down. Industrial data out of China was positive but concerns rose as US and China head into bilateral trade talks this weekend. US lawmakers continue to battle over the next aid package. European stocks fared well helped by demand in cyclical stocks. US treasuries fell ahead of record monthly government funding surge in August. IG CDS spreads rose in Europe and the US but Asian CDS spreads continue their record grind lower. 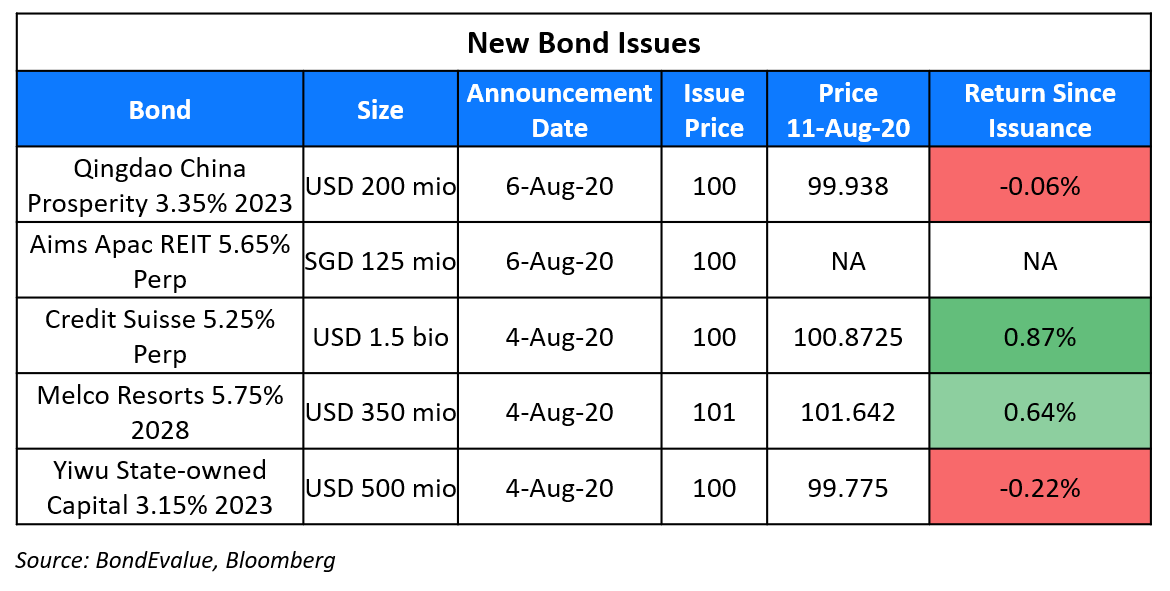 As bond yields across the world plunge, investors are witnessing new records on the primary bond markets. The world’s largest payments network, Visa Inc. set a new record for the lowest yield on a 7Y bond, beating last week’s record set by Google parent Alphabet. Visa priced a $500mn 7Y green bond at razor-thin margin of just 35bp over Treasuries, with a coupon of 0.75% and a yield of 0.766%, beating Google’s coupon of 0.8% and a yield of 0.85% on its $1bn 7Y bond priced last Monday. The details of the other tranches of Visa’s new bond issue, expected to be rated AA-, are as follows:

All three tranches of the new bond have a Make Whole Call (Term of the day, explained below). Visa plans to use the proceeds of the new issuance to fund projects that meet the eligible criteria, including green buildings, renewable energy, sustainable water and wastewater management and projects that support sustainable living behaviors, according to Sustainalytics’ second-party opinion. Visa has been successful in meeting its goal of using 100% green electricity by 2020 across its 31 offices in 76 countries and four global processing centers.

Another US corporate, Ball Corporation set a new record for the lowest yield ever on a bond issued by a junk rated US corporate on Monday. Ball, an aluminum can maker, raised $1.3bn via a 10Y bond at a yield of 2.875%. Yield-starved investors showed strong demand for the new Ball bond, which allowed its bankers, led by Goldman Sachs, to lower the final pricing below 3% and increase the issue size by $300mn from the originally planned $1bn. Ball Corp is rated at BB+, one notch below the lowest investment grade rating of BBB-. John McClain, a portfolio manager at Diamond Hill Capital Management said, “This is another sign of the insatiable hunger for yield the world is currently facing.” The Federal Reserve’s support in the form of the primary and secondary market purchase facilities coupled with hunger for yield among investors has pushed US high yield bond yields to its lowest level since 2017, as per the chart below. 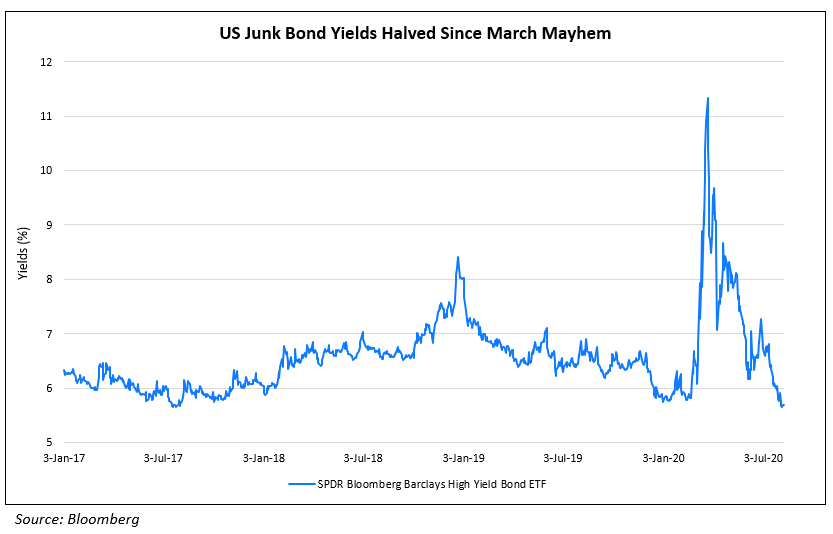 The yield on the SPDR Bloomberg Barclays High Yield Bond ETF has almost halved since the March mayhem, currently at 5.69%.

White House issued two executive orders on Aug 6 prohibiting any transaction related to WeChat and TikTok. President Trump signed the two orders stating that the two Apps automatically collect user data, which could allow the Chinese Communist Party access to American personal and proprietary data and could compromise the National Security related to information and communications technology and services. The order also states that TikTok and WeChat reportedly censor sensitive content such as protests in Hong Kong or treatment of Muslim minorities. This ban is applicable to any person or property subject to the jurisdiction of the US as well as transactions by a US person or within the US. The order could lead to the removal of the two Apps developed by ByteDance and Tencent. Banks could also stop transmitting payments to the related companies.

Tiktok is a video sharing mobile App with reportedly 175mn users in the US out of a total of over 1bn world wide users while WeChat is a messaging, social media and electronic payment App that has a smaller signature in the US but a similar global presence as TikTok. Tencent has significant stakes in many US companies including SnapChat, Universal Music Group and Spotify. The order will be executed within 45 days of the signing. A similar case was also witnessed last year with Huawei.

According to Forbes, Tencent “is reviewing the executive order” while TikTok has taken a more aggressive stance through a statement in which it stated “We are shocked by the recent Executive Order, which was issued without any due process. For nearly a year, we have sought to engage with the US government in good faith,” and added “We will pursue all remedies available to us in order to ensure that the rule of law is not discarded and that our company and our users are treated fairly—if not by the Administration, then by the US courts.” ByteDance is said to be in talks with Microsoft and Twitter for a possible sale of its US business to allow continued usage of the popular App in the US. The Tencent stock plunged by 9.6% over the past 2 days in their worst performance since 2011. While Tencent’s short tenor bonds were largely stable, its longer tenor bonds were down as much as 4 points. 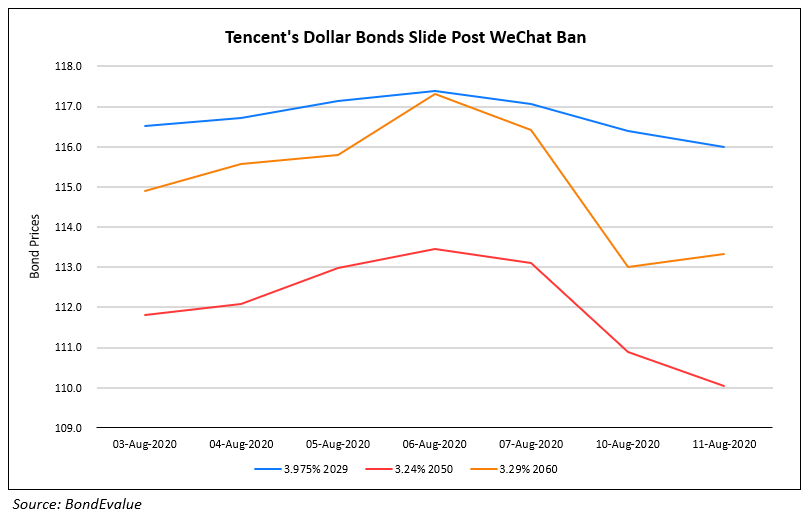 Sri Lankan bonds made it to the top gainers list after the Sri Lanka People’s Front party won 145 seats in the elections held on Aug 6. Former Sri Lankan president Mahinda Rajapaksa has been sworn in as the country’s Prime Minister for the fourth time by his younger brother President Gotabata Rajapaksa after the landslide election victory. The Rajapaksa family holds a strong grip on Sri Lanka’s political landscape and the family has at least 5 members elected to the new parliament in the recently held elections. With this number, the ruling party is just shy of the 2/3rd majority of 150 seats required to make constitutional changes. The opposition party won just 54 seats and the ruling party would not find it hard to gain support for the additional 5 seats from the 26 seats won by smaller parties as the party already has support of at least 4 smaller parties. The news was received with a positive sentiment by the bond markets as Sri Lanka’s sovereign medium- and long-dated dollar bonds traded higher. Its 6.2% and 6.75% bonds due 2027 and 2028 traded up by 2-3 points to 78.9 and 80.5 cents on the dollar on the secondary markets.

A Make Whole Call (MWC) is a type of call option on a bond that gives the bond issuer the right to redeem a bond before its maturity date by compensating (making whole) bondholders for future coupon payments. MWC provisions were introduced in the 1990s and are rarely exercised by issuers. If exercised, the issuer has to pay a lump sum amount to the bondholders that represent the net present value of future foregone coupon payments, typically stated as a formula in the bond prospectus.

On interest rates in Turkey

“God willing, they will go down further,” Erdogan said. “That’s our wish, so that investors can invest in this country in an easier and stronger way.” Erdogan said preliminary indicators were signaling a revival, banks were doing fine and “non-performing loans are sustainable.”

On lowering the rating requirement for bond issuers

“The move could make it easier for some issuers to sell bonds and it is in the spirit of implementing the registration-based system for debt issuance with a more streamlined process,” said Qi Sheng.

“This move can address excessive competition in the local credit rating industry,” said Li Han, adding that it will prompt rating firms to focus more on borrowers’ business operations and financial data.

“There is a growing recognition that the recovery has stalled,” said Hill. “The question is, is that stall going to turn into more of a pause, or a more ominous retrenchment.”

“The big question for the market is how this massive borrowing is going to be facilitated when banks are already full to the limit,” said Singh. “If the RBI doesn’t intervene, we could see yields resetting upwards at every auction,” he said.

“Absence of any clarity or support from the RBI may have the potential to reverse the recent decline in bond yields,” said Dalal.

On value in corporate bonds

“Credit as an asset class looks still cheap relative to government bonds or equities or even against the level of VIX in the case of U.S. high-yield credit,” wrote JPMorgan strategists led by Nikolaos Panigirtzoglou. The pace of ratings downgrades shows signs of rapid normalization, they added.

On the attractiveness of Indonesia sovereign debt

“The declining yields of major sovereigns is the anchor point,” said Wiranto. “It has allowed investors to put aside idiosyncratic concerns specific to Indonesia for now and focus only on the high yield.”

“Indonesia real yields are still among the highest in the investible EM local currency space and are projected to remain so,” said McNicholas. “That ensures it retains plenty of interest.”

“The key risk is the current debt monetisation is extended to the next year or expanded more than now planned,” said Seong. “If it breaches the market anticipation, the side effect will be highlighted.” 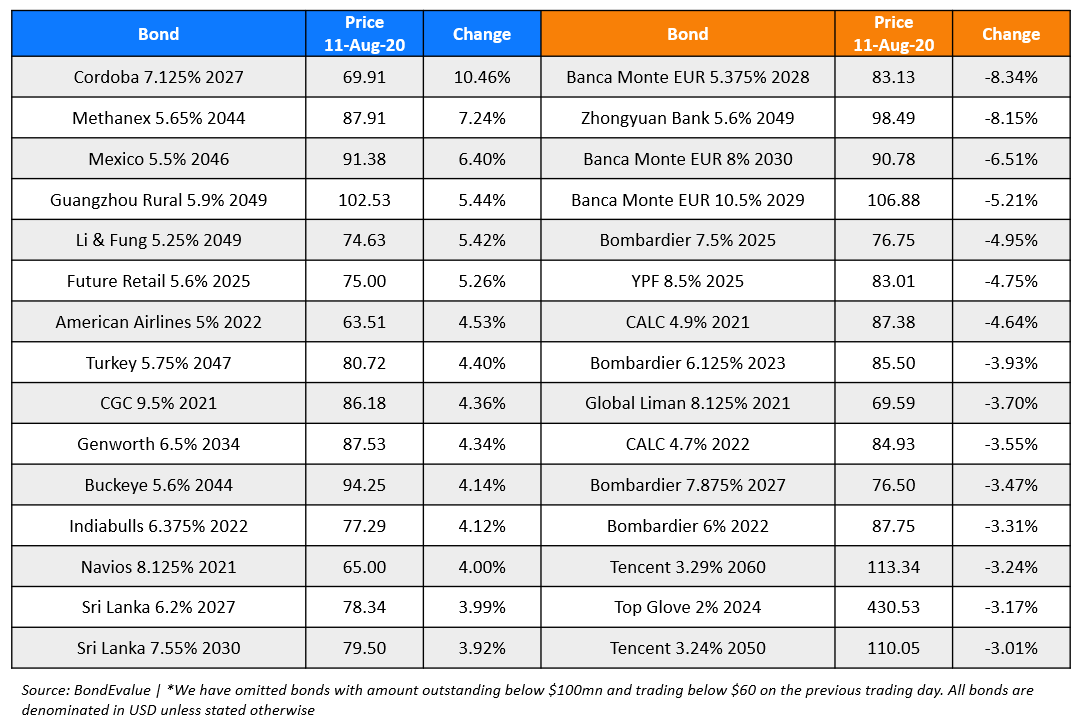