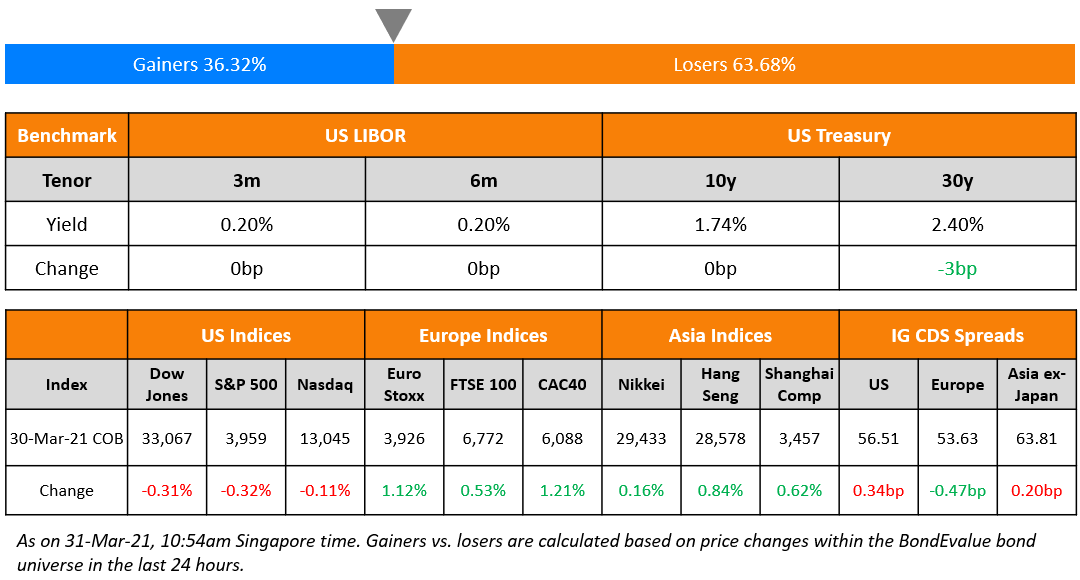 US equities saw a slight drop on Tuesday with the S&P down 0.3% and Nasdaq down 0.1%. The US 10Y Treasury yield spiked to 1.78% before retracting to 1.74%. DAX advanced 1.3% while the FTSE and CAC 40 rose 0.53% and 1.21%. US IG CDS spreads were 0.3bp wider and HY was 2.6bp wider. EU main CDS spreads were 0.5bp tighter and crossover spreads tightened 2.3bp. Asian equity markets are lower 0.4% and Asia ex-Japan CDS spreads are 0.2bp wider. Asian primary markets have taken a breather with just 3 new deals today following 8 new bonds priced on Tuesday. 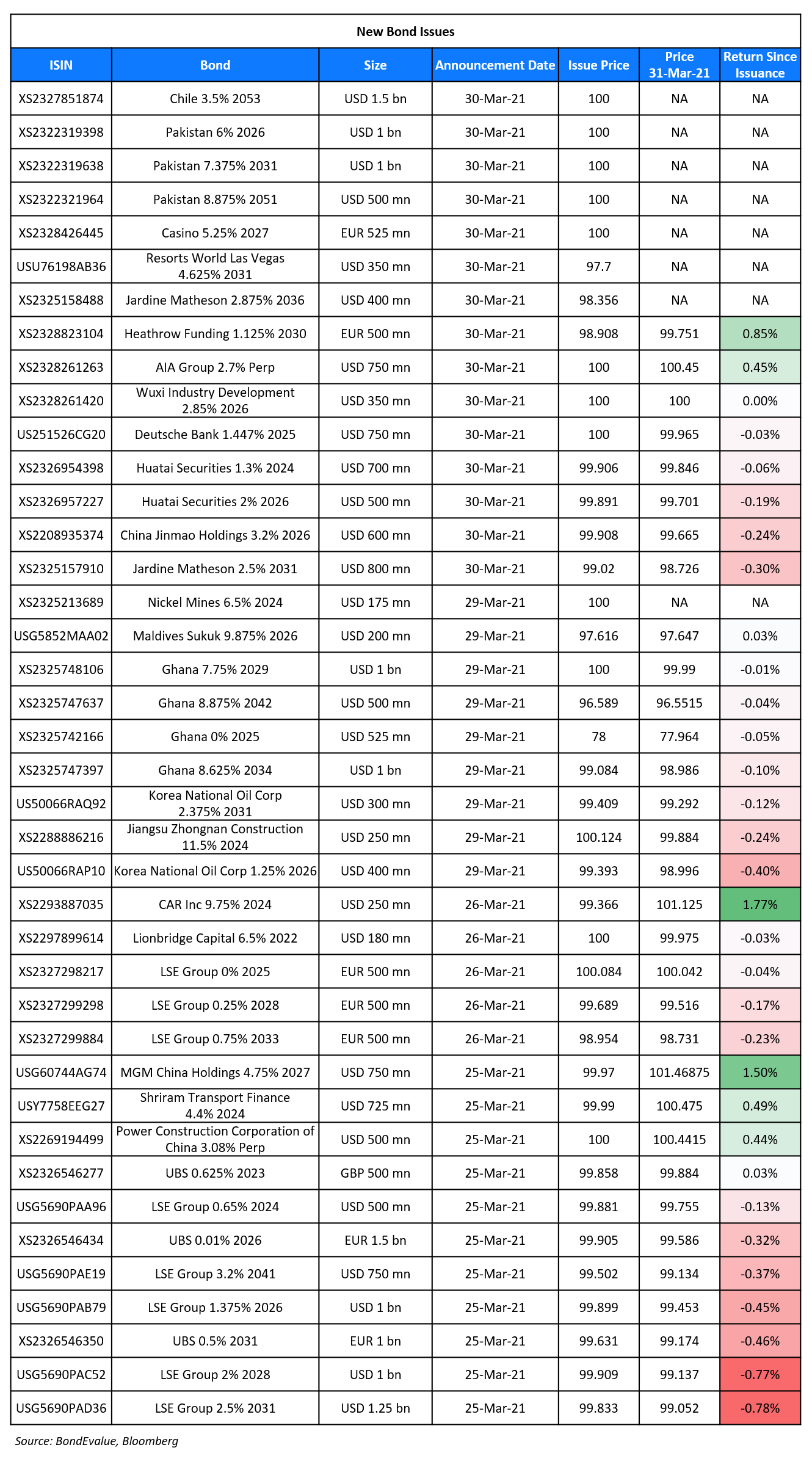 Resorts World Las Vegas raised $350mn via a 10Y bond at a yield of 4.919%, or T+320bp, 40bp inside initial guidance of at T+360bp area. The bonds have expected ratings of BBB-/BBB and received orders over $1.9bn, 5.4x issue size. US took 59%, EMEA 23% and Asia 18%. Asset/fund managers bought 87%, insurers 12% and banks and private banks 1%. Wholly-owned subsidiary RWLV Capital is a co-issuer. Both Resorts World Las Vegas and the co-issuer are indirect wholly-owned subsidiaries of Genting Bhd. The ultimate parent is the keepwell deed provider of the new bonds. There is a change of control put at 101 on a control change trigger event and a rating downgrade to below investment grade status. Proceeds will be used to repay outstanding borrowings.

Deutsche Bank raised $750mn via a 4Y non-call 3Y (4NC3) bond at a yield of 1.447%, 22.5bp inside initial guidance of T+135bp area. The SEC-registered bonds have expected ratings of Baa3/BBB- and proceeds will be used for general corporate purposes.

China Jinmao Holdings raised $600mn via 5Y bonds at a yield of 3.22%, 40bp inside initial guidance of T+270bp area. The bonds have expected ratings of BBB- and received orders over $2bn, 3.3x issue size. Proceeds will be used for debt refinancing. Franshion Brilliant is the issuer and the Hong Kong-listed parent company is the guarantor.

AIA Group raised $750mn via a PerpNC5 Tier 2 bond at a yield of 2.7%, 42.5bp inside initial guidance of 3.125% area. The bonds have expected ratings of A3/A- and received orders over $5bn, 6.7x issue size. There is no principal loss absorption on the bonds and coupons can be deferred, but are cumulative and compounding. If the bonds are not called, the coupon will reset to the initial spread of 175.8bp over 5Y US Treasuries. Asset/fund managers took 70%, sovereign wealth funds, public institutions, pension funds and insurers 23%, and banks and financial institutions 3%, while private banks and others took 4%. Asian investors booked 90% and Europe the remaining 10%.

Wuxi Industry Development raised $350mn via a 5Y bond at a yield of 2.85%, 40bp inside initial guidance of 3.25% area. The bonds have expected ratings of BBB and received orders over $1.1bn, 3.1x issue size. Proceeds will be used for debt refinancing and working capital. Nomura’s trading desk views the guarantor as a weak local SOE and said the deal is “very expensive” even at the IPG level. The desk also said that they are concerned about Wuxi’s short-debt focused maturity profile, its minority equity interests in most of its investments and its reliance on earnings contributions from two core listed units.

Chile raised $1.5bn via a 32Y sustainability Formosa at a yield of 3.5%, or T+111.9bp, 28.1bp inside initial guidance of T+140bp area. Proceeds will be used to invest in projects that qualify as eligible green or social expenditures under the sovereign’s sustainable bond framework.

Modern Monetary Theory (MMT) is a school of thought in economics that encourages countries, which control their own currency, to “print” money and use it towards government spending to boost the domestic economy in an environment where inflation is relatively low. Advocates of MMT argue that the accompanying rise in the level of national debt and deficit is not a problem as money can be “printed” to pay it off. While inflation is expected to be a natural fallout from this, theorists say that it can be controlled by monetary policy.

Given the current environment where government’s have been providing stimulus measures to boost economies amid the pandemic, industry professionals are likening this to MMT with some referring to the current state as “MMT-lite”

On the positive outlook ahead for US economy – John Williams, New York Federal Reserve Bank President

“I’m optimistic about the overall economy,” Williams said. “We’re making great strides on the vaccination program…I think we have a lot of positives going forward.”

On willingness to embrace ultra-low interest rates and record fiscal spending a flirtation with Modern Monetary Theory (Term of the day, explained above)

“What Covid-19 has done is accelerated fiscal policy and fiscal response, and married closer and closer coordination with monetary tools,” said Shvets. “It’s not MMT yet, but it comes very close to it. The result is market signals atrophy and deteriorate.” “Most investors are asking how do we normalize fiscal policy,” he said. “Well you don’t. The only thing that can derail it is if suddenly we have stagflation. But it’s very hard to generate inflation in a world that’s highly leveraged, highly financialized.”

“We see the COVID-19 crisis as a deflationary shock which enables these ‘MMT-lite’ strategies to be adopted, at least for now,” Nicola said.

“I don’t get too wrapped up in the exact particulars of historic average values when we’re in a totally different zipcode for interest rates,” said Berg. “We’re in this crazy weird world — stay invested, stay in the game.”

“What we’ll remember is that the benefits of very aggressive policy intervention appeared to vastly outweigh the cost,” said Sheets.

On the Fed’s commitment to push inflation above 2% – Randal Quarles, Federal Reserve Vice Chair for Supervision

“I think it is very credible to expect the committee to be comfortable with inflation somewhat over our 2% target,” he said. “Over time we will look to average, and I think that is a very credible commitment from the committee and I am very supportive of it.” “We shouldn’t jump the gun. Let’s wait until we see those outcomes,” Quarles said. “And clearly the performance of the macro economy, and the performance of monetary policy, not just over the last decade but really even 15, 20 years, would argue that that leads to superior outcomes.”

“There will be a difference in the size of the deal, but we will have a well-rounded product to play head-to-head in the U.S. market too,” Noya said. “We can build on the capacity to use the balance sheet in a smart way,” Noya said. “Given the interest rates at a macro level, the activity of the funds and financial sponsors, the amount of resources they’re raising, the size of the liabilities of the CLOs, that the number of CLOs is increasing, this is a very favorable scenario for a strong M&A activity.”

“We have a very powerful platform with an excellent team that in Europe was focused on internal transactions of the bank,” he said. “Now we are going to do it more for our clients, from hedge funds to private equity and companies.” “Before clients asked ‘how many points in savings am I going to have if I do a green issuance,’ and now it is much more strategic,” he said. “If it’s not green it will not exist.” 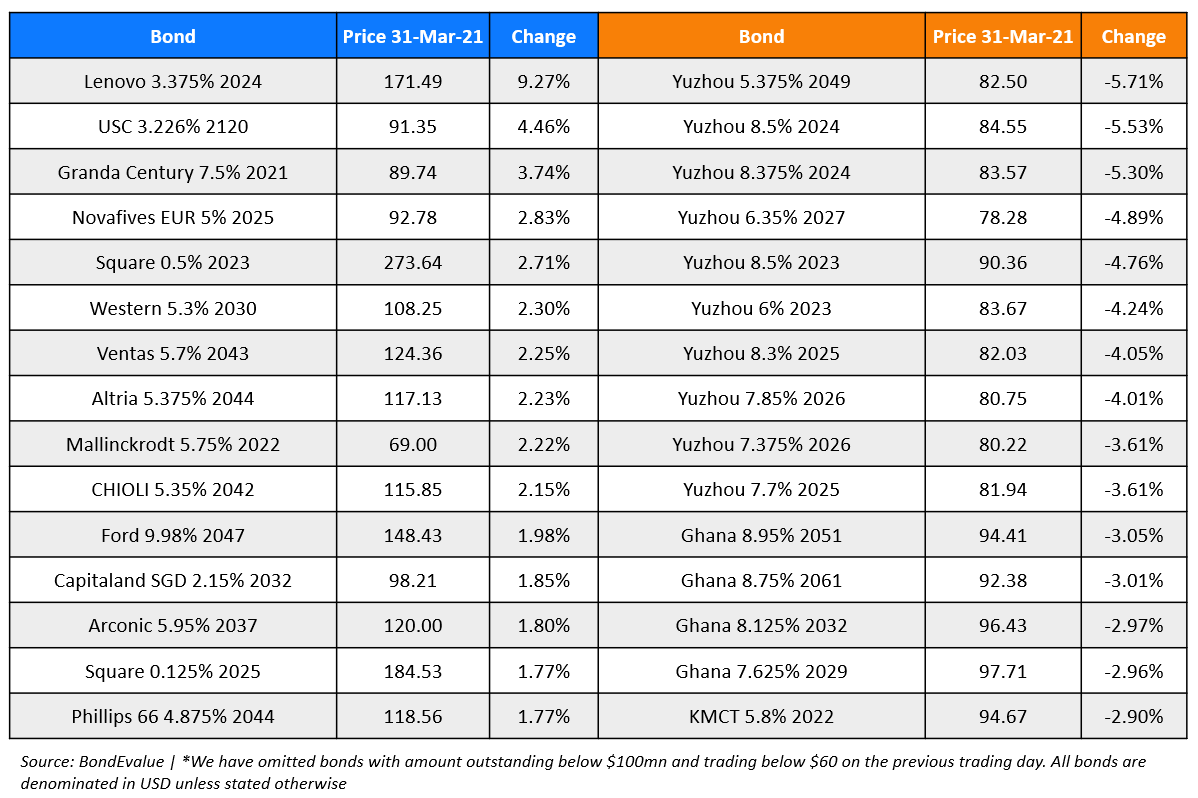