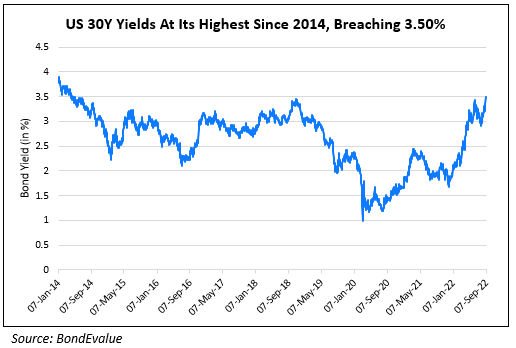 High duration and long-tenor dollar bonds of companies rated in the AAA to A bracket, the top-tier of the credit rating bucket, saw their prices top the losers list yesterday. These included bonds of companies like AT&T, Amazon, Alphabet, Temasek, Pepsico etc. that fell 4-5%. This move was primarily on account of the move on the benchmark US 30Y Treasury yield that reached its highest levels since July 2014 (as seen in the chart below). Bloomberg notes that the sell-off was driven in part by a flurry of new corporate bond issuances in the region and a stronger-than-expected ISM Non-Manufacturing data print. The US saw $25.6bn in new deal volumes with 32 deals getting priced yesterday. This came after only $2.5bn in corporate bond deals were priced over the last two weeks.