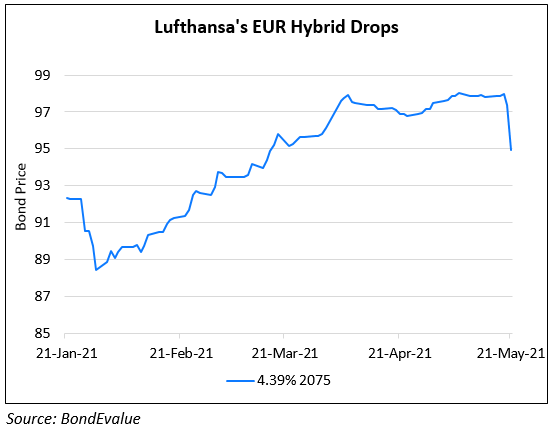 Lufthansa Group’s executive board decided to suspend future coupon payments on its hybrid €500mn 4.39% 2075s that were issued in 2015. The company said that the suspension of coupons “does not result in the forfeiture of the entitlement to the coupon payments” and that they intend to “make up for the deferred coupon payments as soon as possible once the stabilization by the ESF has been completed.” Lufthansa had been given a state aid package and paying coupons would be considered a violation based on the EU Commission’s terms of the package. Lufthansa added that they have “not issued any other corporate bonds or financial instruments with options to suspend interest or coupon payments.” Bankers do note that despite this event, it would be unlikely to have any impact on Lufthansa’s future access to capital markets and that this is an isolated case. Bloomberg points out that while coupon deferrals are rare in hybrids, once they happen, they can cause substantial havoc. They added that from a ratings agency perspective, hybrid borrowings count towards equity provisions with discretionary coupons. BNP analysts said that there is unlikely to be impact for other state-owned issuers as none of them have taken emergency state aid. As per the bond’s prospectus, the issuer may, at its discretion, defer interest payments at any time but is not obliged to if specific events like dividend or other distributions are made to shareholders. Additionally, the delayed interest payments will not itself accrue interest and failure to pay/defer will not constitute default.