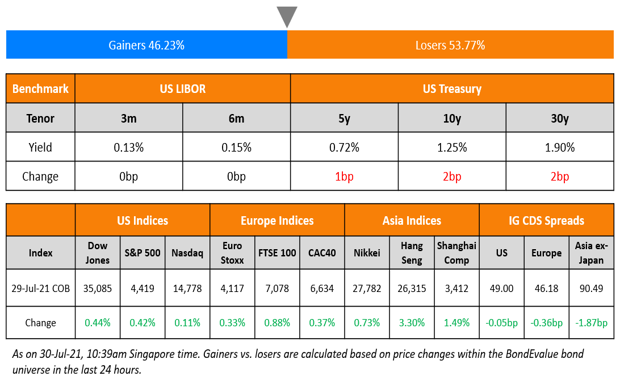 US markets closed higher in the wake of dovish Fed comments. S&P closed 0.4% higher after scaling another record and Nasdaq gained 0.1%. Financials, Energy and Consumer Discretionary pushed the markets higher by ~1% while Communication Services, down 0.9%, pulled them lower. Amazon posted a revenues of over $100bn for a third straight quarter, but fell short of expectations (details below). BNP Paribas will be reporting earnings today. FTSE, DAX and CAC were up 0.9%, 0.5% and 0.4% respectively. Saudi TASI and UAE’s ADX were up 0.7% and 1% respectively. Brazil’s Bovespa was down 0.5%. Asia Pacific stocks were down – Nikkei and HSI are down over 1.5%, Singapore’s STI is broadly flat and Shanghai is down ~0.5%.

Real gross domestic product (GDP) of the US increased at an annual rate of 6.5% in 2Q2021 vs. 6.3% in 1Q2021 reflecting increases in personal consumption expenditures (PCE), nonresidential fixed investment, exports, and state and local government spending. However the GDP was much lower than the estimates of 8.4%. The jobless claims number for the week ended July 24 came in at 400k, considerably higher than the estimates of 385k. US 10Y Treasury yields ended 2bp higher at 1.25%. US IG CDS were broadly flat and HY spreads tightened 1.7bp. EU Main and Crossover spreads tightened 0.4bp and 2bp respectively.  Asia ex-Japan CDS spreads were 1.9bp tighter. 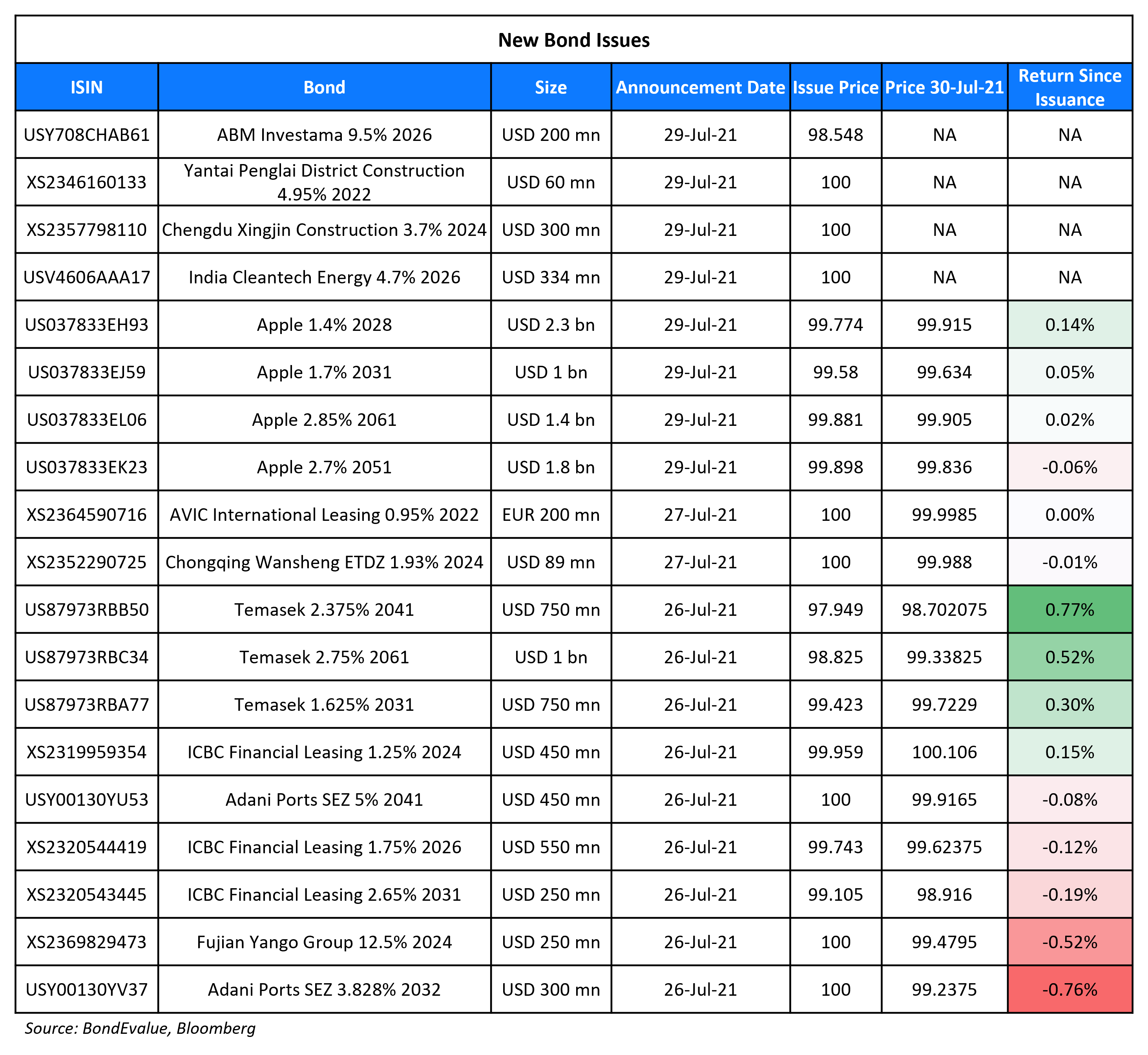 The SEC registered bonds (Term of the day, explained below) are rated Aa1/AA+. Proceeds will be used for general corporate purposes, including share repurchases and payment of dividends to return capital to shareholders, funding for working capital, capital expenditures, acquisitions and repayment of debt.

India Cleantech Energy raised $334mn via a 5Y non-call 3Y (5NC3) green amortizing bond at a yield of 4.7%, 30bp inside initial guidance of 5.3% area, as per Bloomberg. The bonds have expected ratings of Ba3/BB-. The Weighted Average Life (WAL) is 4.35Y. Proceeds will be used to subscribe to INR non-convertible debentures (NCDs) to be issued by a pool of 12 subsidiaries of Acme Solar Holdings. The bonds have a green certification from the Climate Bonds Initiative (CBI). India Cleantech Energy is an orphan financing vehicle incorporated in Mauritius and its ownership is not linked to Acme Solar. The subsidiaries plan to use proceeds of the rupee NCDs to refinance debt, meet prepayment penalties and transaction expenses as well as on-lending to Acme Solar for debt repayment and capital expenditure.

Chengdu Xingjin Construction Development and Investment raised $300mn via a 3Y bond at a yield of 3.7% unchanged from initial guidance. Proceeds will be used for project construction, working capital and general corporate purposes.

As the name suggests, these are bonds registered with the US Securities and Exchange Commission (SEC). These are not to be confused with 144A bonds, which are privately placed, not SEC registered and have lesser documentation and are traded among Qualified Institutional Buyers (QIBs). Given 144As are restricted securities, they have resale and transfer restrictions that are not applicable for SEC-registered securities. Besides these, they also have a few other differences like being eligible for inclusion in bond indices like Barclays Aggregate Bond Index, no investment restrictions and no private placement restrictions on communications. Apple raised $6.5bn via SEC-registered bonds.

On credit market pain seen potentially spreading from China to US – Matthew Mish, UBS Group AG head of credit strategy
“Managers may choose to reduce risk preemptively or if there’s less liquidity in Asia credit.” “They may also sell in part because regional valuation differences are extreme.” “If there is a restructuring or default event in that market with a large issuer and you start to see spillover, that is a cascade of defaults more broadly and a sense this is becoming more of a systemic event, that would change the picture.” “It’s certainly one possible outcome, but it’s not our base case and a lot of this is heavily dependent on the government.”

“Tech is a smaller part of the credit markets in Asia.” “One of the key sectors that has gotten impacted in the credit markets is actually real estate.” On Asian high-yield bond markets, “I think interestingly, we are in the middle of a correction,” Seth said. “So that obviously warrants some level of caution — at this point we’re in the summer months with lower liquidity, so expect a bit more noise in front of us.” “It’s very unnerving when you are in the midst of (a correction). But if you are able to actually systematically look through the noise and pick the names you like — have a diversified portfolio, build resilience in the portfolio,” Seth said. “I think we are in one more of those volatile periods where it will pay investors to actually be patient here and build some positions.”
On the opportunities in diversifying in emerging markets bonds – Natalia Gurushina, VanEck chief economist of emerging markets
“Against this backdrop, the upcoming release of China’s activity gauges (PMIs) would be of utmost importance because of their potential to reinforce or undermine China’s 2021 growth story. The consensus forecast for 2021 GDP growth is still unchanged at 8.5%, despite tighter regulations in real estate, tech sectors, and new mobility restrictions/virus outbreaks. Weaker than expected PMIs could become the proverbial straw that broke the camel’s back.”
On sustainable bonds to hit record US$850 billion in 2021 – Matthew Kuchtyak, assistant vice president-analyst at Moody’s

“Following record first-half issuance, we now forecast about US$450 billion of green bonds and US$200 billion each of social bonds and sustainability bonds this year.” “We still expect sustainable bonds to account for around 8 to 10% of global debt issuance in 2021, as issuers across all segments of the market continue to explore how they can link their capital markets activities with their sustainability objectives.” 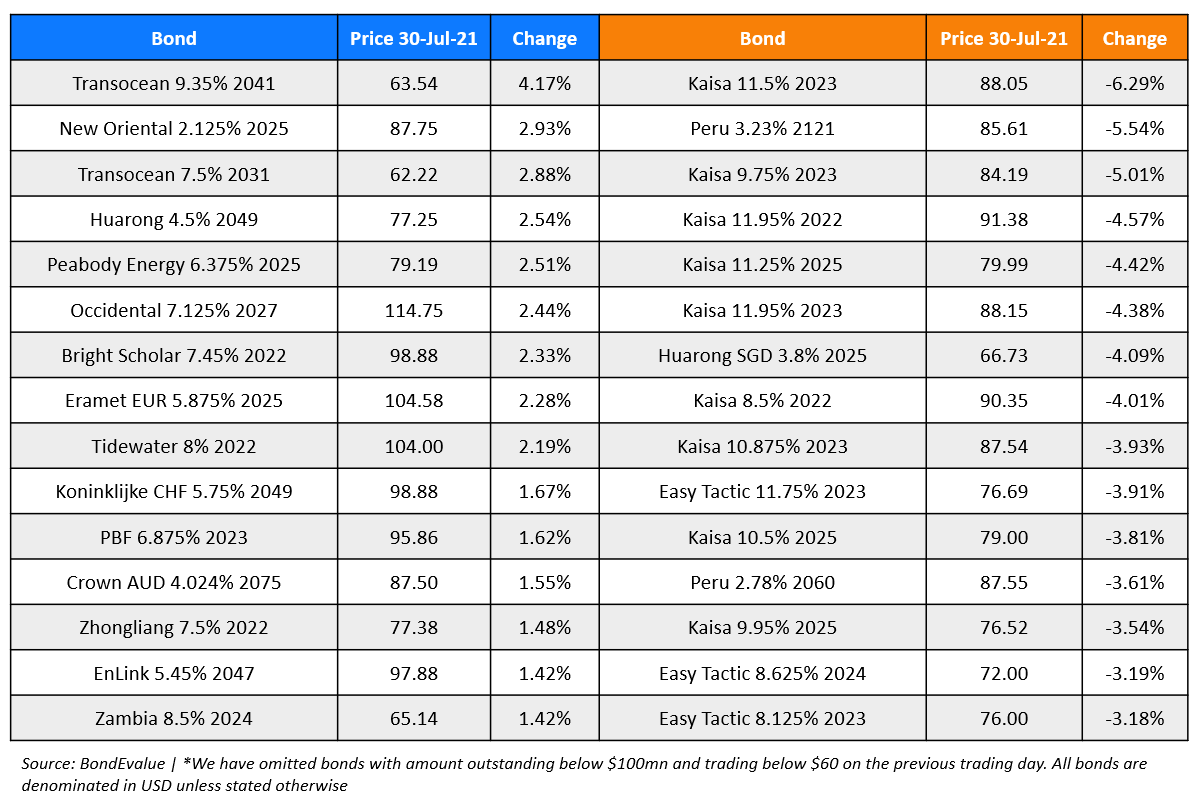