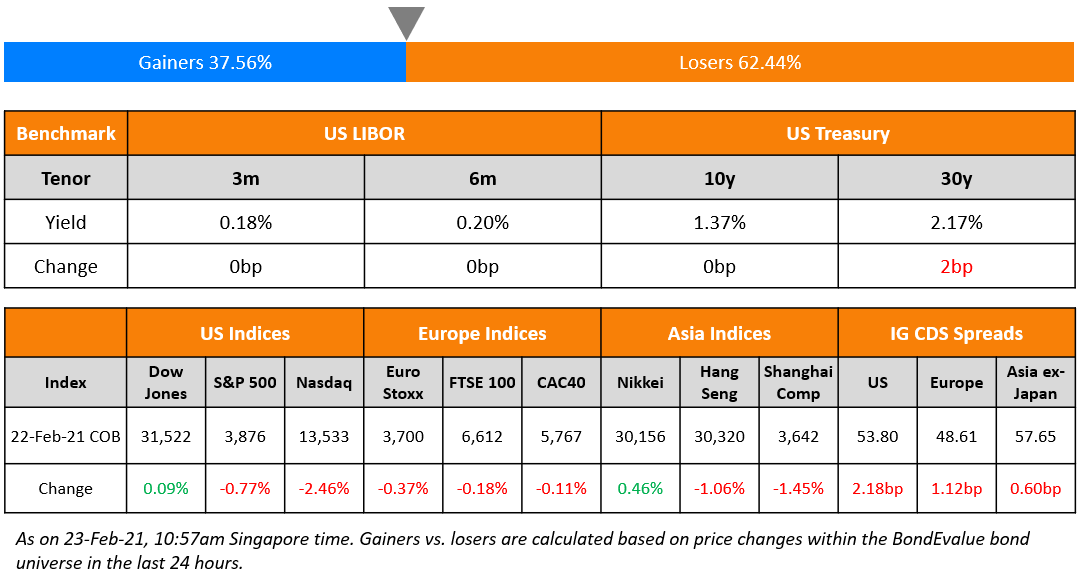 New to the BEV App? BondEvalue will be conducting a complimentary session on Navigating The Bond Markets by Leveraging the BEV App tomorrow, February 24. This session is aimed at helping bond investors in tracking their investments using the BondEvalue App. 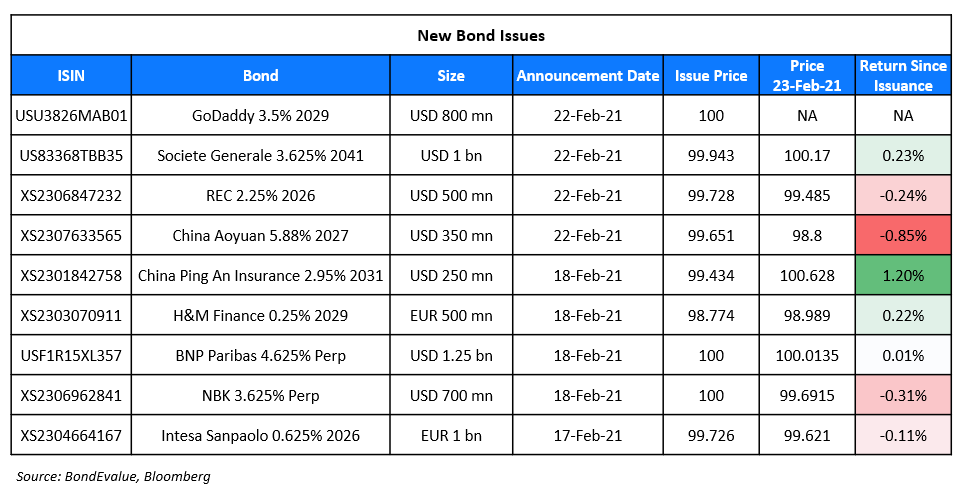 SocGen raised $1bn via a 20Y subordinated Tier 2 bond (Term of the day, explained below) at a yield of 3.629%, or T+160bp, 25bp inside initial guidance of T+185bp area. The bonds have expected ratings of Baa3/BBB-/BBB. The bonds will be issued under their $25bn medium term note (MTN) programme.

China Aoyuan raised $350mn via a 6Y non-call 4Y (6NC4) bond at a yield of 5.95%, 25bp inside initial guidance of 6.2% area. The bonds have expected ratings of BB and received orders over $2.1bn, 6x issue size. The Chinese real estate company will use proceeds for debt refinancing. The final pricing was wider than the 5.8% fair value estimate by both Nomura’s trading desk and CreditSights. The new bond has the longest tenor issued by the company, optimizing the maturity profile and lowering borrowing costs, the company said in a press release. The deal is also the first from China’s property sector in the new year of the Ox.

Tier 2 bonds are debt instruments issued by banks to meet their regulatory tier 2 capital requirements. Tier 2 capital (and thus tier 2 bonds) are called ‘gone concern’ capital since it gets affected only when the company/bank is a gone concern whereas Tier 1 is called ‘going concern’ capital. Tier 1 consists of Common Equity Tier 1 (CET1) and Additional Tier 1 (AT1) capital which are the highest quality of regulatory capital as they are the first to absorb losses. Tier 2 instruments must absorb losses after tier 1 but before depositors and general creditors do. Thus in terms of a bank’s liability structure, Tier 2 is less risky and ranks senior to Tier 1 capital. From a bond investor’s perspective, Tier 2 bonds are senior, and therefore less risky, compared to AT1 bonds as AT1s would be the first to absorb losses in the event of a deterioration in bank capital.

On Yellen, Powell wary of financial froth as they push for stimulus

There “may be sectors where we should be very careful,” Yellen said when asked about possible speculative sizzle.

“With investors betting on persistent policy backstop, a sense of complacency appears to be permeating markets,” they wrote.

“That’s what makes it hard to tell what’s an asset bubble and what’s fundamental because they’re both pointing in the same direction,” said Blinder.

“I would encourage her to think about where there are holes” in the financial system. “I don’t see a crisis around the corner,” he added. But “if you keep interest rates very low for a long period of time you need to watch out for froth.”

On the need to inflation-proof debt-market portfolios

“We’ve increased our allocation to bank loans, in part by selling high yield,” Page said. “Put it this way: if we can get a similar yield on high yield and loans, on a risk adjusted basis the asset class that should behave best in rising rates — loans — looks more attractive.”

“The big risk in the market really is inflation, whether it is transitory or whether it is something more deep rooted,” said Narayanan. “There’s just a tremendous amount of stimulus in the marketplace, both monetary and fiscal, that favor economic growth.”

“Inflation will be more transitory than sustained,” said Nolan. “We have to see how steep the curve gets and if the perceived inflationary pressures actually materialize into inflation.”

“Rising rates could very well be a prelude to inflation as we take into account the current macroeconomic environment,” Reed said. “A modest rise in rates off current levels seems likely for the remainder of 2021, but the Fed has been transparent in willing the market to invest behind yield, growth and recovery.”

“New Zealand is recovering quicker than most advanced economies after the Covid-19 pandemic and subsequent government lockdown delivered a severe economic and fiscal shock to the country,” S&P said. “While downside risks persist, such as another outbreak, we expect New Zealand’s fiscal indicators to recover during the next few years.”

“Reflecting substantial fiscal support, New Zealand’s net general government debt is much higher than in the past but remains lower than most of its peers,” S&P said. “We believe that New Zealand’s relatively better management of the pandemic means that its credit metrics are in a good position to weather potential deteriorations associated with further negative pressures, including from a possible weakening of the real estate market, at its current rating level.”

On BlackRock’s bearish stance on credit and government bonds due to high valuations and inflation expectations – in a note by Jean Boivin, head of the BlackRock Investment Institute, and others

“A key risk is a further increase in long-term yields as markets grapple with an economic restart that could beat expectations,” the firm said. “This could spark bouts of volatility, even though we believe the Fed would lean against any sharp moves for the time being.” 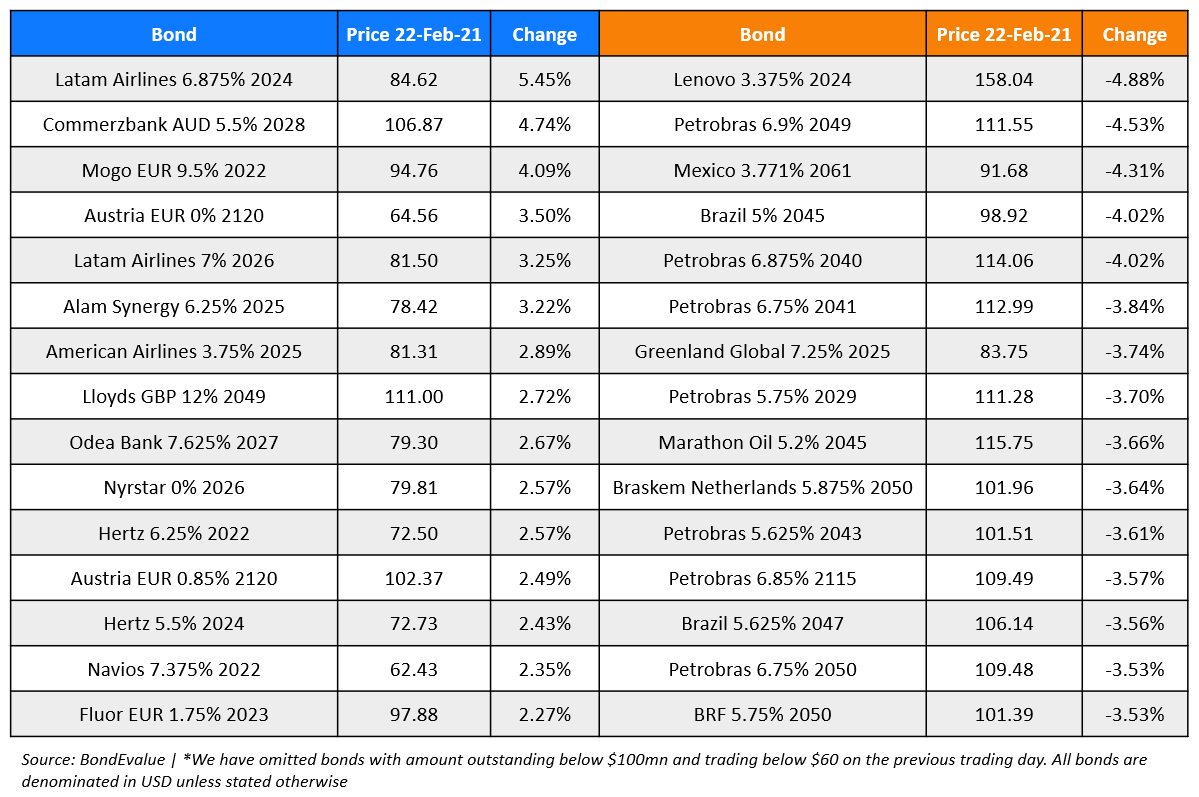