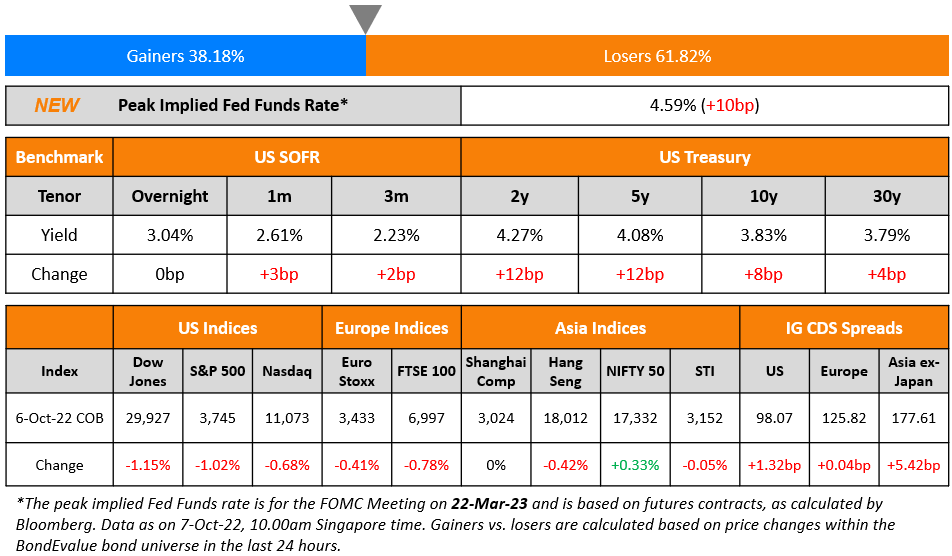 US Treasury yields jumped across the board on Thursday, led by the short-end, with the 2Y and 5Y yields up 12bp each while the 10Y was up 8bp. The peak Fed Funds Rate currently stands at 4.59% for the FOMC’s March 2023 meeting, 10bp higher than yesterday. US credit markets saw CDS spreads widen with IG higher by 1.6bp and HY widening by 9bp. US equity markets ended lower with the S&P and Nasdaq down 1% and 0.7% respectively. All eyes are now on the September Non-Farm Payrolls (NFP) (Term of the Day, explained below) data due later today. Expectations are for a 255k print, with the unemployment rate expected at 3.7%.

Non-Farm Payrolls (NFP) is a key data point that is released by the US Bureau of Labor Statistics (BLS) usually on the first Friday of every month. NFP measures net changes in employment excluding agricultural, local government, private household and not-for-profit sectors over the past month and is a key economic indicator in the United States. A high reading of the NFP is considered a positive sign for the US economy while a negative reading is considered a sign of a slowdown in the US jobs market. The NFP indicator is closely watched by traders, especially as it is one of the first monthly economic indicators to be released, and because of the direct relationship between job creation and economic growth.

“We have more work to do… Until I see some evidence that underlying inflation has solidly peaked and is hopefully headed back down, I’m not ready to declare a pause. I think we’re quite a ways away from a pause… I fully expect that there are going to be some losses and there are going to be some failures around the global economy as we transition to a higher-interest rate environment”

“We have further to go. Inflation is high right now and we need a more restrictive setting of monetary policy…. Policy rate is likely headed to 4.5%-4.75% by the spring of 2023”

“We have to bring interest rates up to a level that will get inflation on that 2% path, and I have not seen the compelling evidence that I need to see that would suggest that we could start reducing the pace at which we’re going”

Arvind Narayanan, a Senior PM and Co-Head of IG credit

“The critical issue is the degree to which third-quarter earnings results and forward-looking guidance from companies surprises to the downside relative to expectations… Volatility will remain a theme in fourth-quarter with the downside risk — not the base case — being a full-blown recession, prompting spreads to move much wider”

“Investors can throw out projecting an end of fed fund rate increases based upon #inflation, unemployment, or other macroeconomic factors. The end of #Fed tightening will come when something breaks, and from where I sit cracks are forming.”