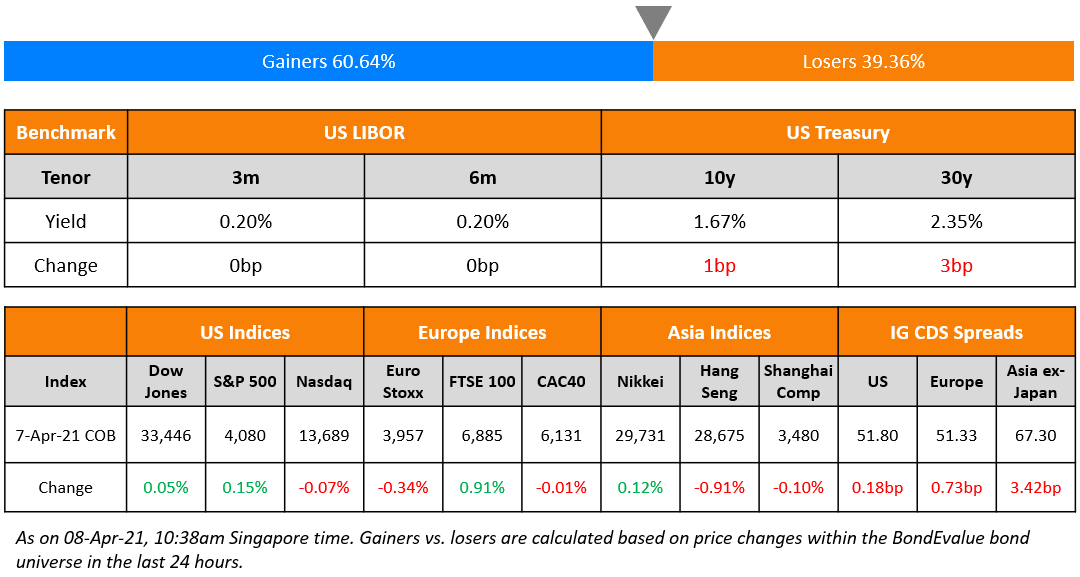 Both S&P and Nasdaq ended almost flat while US 10Y yields gained 1bp to 1.67%. Focus now shifts to the upcoming earnings season to get an idea on how corporate America stands. The Fed’s March meeting minutes indicated a dovish tone similar to their meeting last month. In Europe, the DAX and CAC were marginally lower while FTSE rallied 0.9% adding to yesterday’s gains. US IG CDS spreads were 0.2bp wider and HY was 0.5bp tighter. Looking at the Bloomberg-Barclays US High Yield index, spreads measured by the Option Adjusted Spreads (OAS) are currently at a 14Y lows last seen only in 2007 before the global financial crisis. 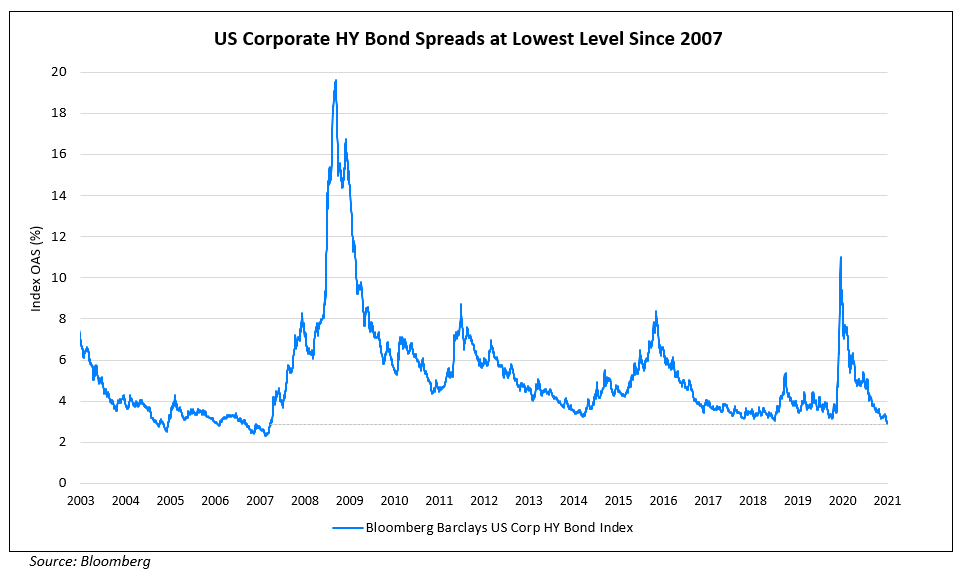 For perspective, across US HY, the upgrade-downgrade ratio by Moody’s and S&P are at 10Y and 9Y highs of 2.19 and 1.52 respectively, during any quarter citing a recovery in credit metrics in the junk bonds space. Meanwhile, EU main CDS spreads were 0.7bp wider and crossover spreads widened 3bp. Asian equity markets are higher by 0.2% and Asia ex-Japan CDS spreads were 3.4bp wider, not close to its recent historical lows. 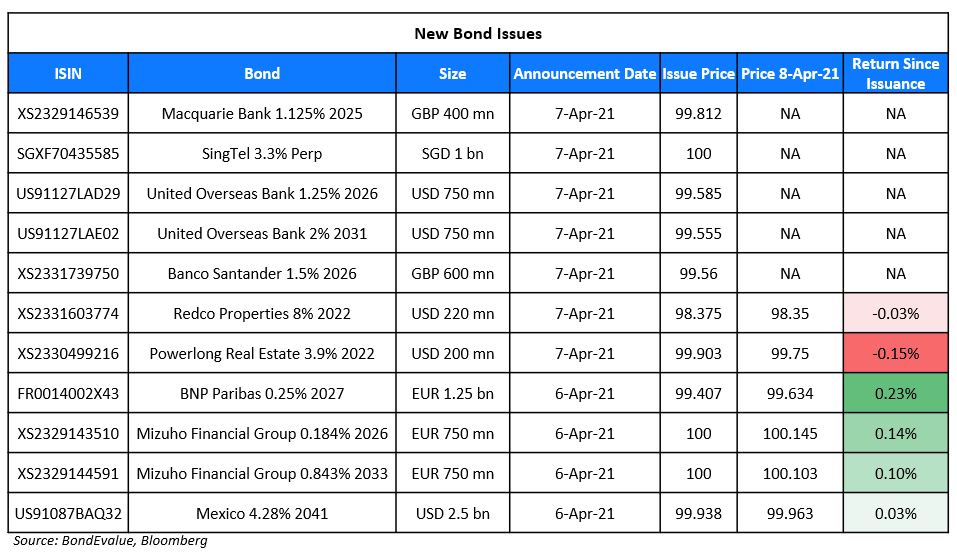 Redco Properties raised $220mn via a 364-day sustainability note at a yield of 9.75%, 25bp inside initial guidance of 10% area. The bonds have expected ratings of B+/BB-, and received orders over $1.1bn, 5x issue size. There is a redemption at 101 at the option of the issuer, following registration with the NDRC. Proceeds will be used for offshore debt refinancing in accordance with its sustainable finance framework.

Singapore Telecommunications (SingTel) raised S$1bn via a PerpNC10.5 at a yield of 3.3%, 30bp inside initial guidance of 3.6% area. The bonds have expected ratings of A3/BBB and received orders over S$2.1bn, 2.1x issue size. EMEA accounted for 1% and Asia ex-Singapore accounted for 14% – Hong Kong, South Korea, China and Europe accounted for a combined 15%. Singapore made up the remaining 85%. The bonds will be issued by funding vehicle SingTel Group Treasury and guaranteed by SingTel. The coupons will reset every 10 years from year 10.5 if not called, to the prevailing Singapore dollar SOR plus an initial credit spread and a step-up margin of 25bp. The step-up margin will increase to 100bp from year 30.5 if not called. The coupon is deferrable on a cumulative and compounding basis. SingTel’s is the third Perp offering this year following Olam’s PerpNC5.5 in Jan and ESR Cayman’s PerpNC5 in Feb which currently yield 5% and 5.61% respectively.

UOB raised $1.5bn via a dual-tranche sustainability bond offering. It raised $750mn via a 5Y senior bonds at a yield of 1.336%, or T+48bp, 27bp inside initial guidance of T+75bp area. It also raised $750mn via a 10.5NC5.5 subordinated Tier 2 bond at a yield of 2.086%, or T+123bp, 27bp inside initial guidance of T+150bp area. The 5Y has expected ratings of Aa1/AA-/AA- and the 10.5NC5.5 has expected ratings of A2/BBB+/A. The bonds received orders over $3.2bn, 2.1x issue size. The notes will be issued under UOB’s GMTN programme and sustainable bond framework, with a sum equivalent to the proceeds used to finance and/or refinance green and social assets. Sustainalytics has provided a second opinion on the framework.

Macquarie Bank raised £400bn ($550bn) via a 4Y at a yield of 1.167%, 5-10bp inside initial guidance of UKT+95/100bp. The bonds have expected ratings of A2/A+/A, and received orders over £600mn ($825mn). The offering was put on hold last week after their capital requirements were increased by Aussie regulators following multiple breaches.

Special Drawing Rights (SDRs) which are issued by the IMF to its member countries’ central banks are a reserve asset which can be exchanged for hard currencies with another central bank. The value of an SDR is set daily based on a basket of five major international currencies – the USD (42%), the EUR (31%), the CNY (11%), the JPY (8%) and the GBP (8%). An allocation of SDRs requires approval by IMF members holding 85% of the total votes and US is the biggest holding 16.5% of the votes. Reuters reports that till date, the IMF has allocated about SDR 204.2bn ($285 billion). Plans are ongoing to increase the allocation to help low-income countries which are hurt by Covid.

On US yields mostly down with market in consolidation phase

“The conviction for today is more limited and more akin to a period of consolidation around the current levels and trading volumes are muted,” said Jeffery.
Gennadiy Goldberg, senior rates strategist, at TD Securities
“I don’t think we’ll see much change in the Fed’s tone. They will probably still sound dovish,” said Goldberg. “One thing I will be looking at would be clarification on what constitutes ‘sufficient further progress’ as stated by the Fed.”
On US markets shifting to price in Fed rate rise next year – Seema Shah, chief strategist at Principal Global Investors

“Because of the growth outlook, it makes sense that people are pricing in a rate hike before what the Fed’s [forecasts] are projecting, but 2022 seems particularly early,” said Shah. “The Fed has given very clear communication on its intention to let the economy run super hot.”

On more investors viewing China as a ‘credible’ haven to challenge Treasuries
Gustavo Medeiros, Ashmore’s deputy head of research
“China’s emergence as a new and credible safe haven destination for bond holders should gradually chip away at the status of the dollar and U.S. Treasuries as the only safe place to hide,” said Medeiros.
Luca Paolini, the chief strategist at Pictet Asset Management
“We have a long-term view of China, which is very optimistic, because of valuation, because of very responsible central banks, because of flows, because of a decline in inflation,” said Paolini.
Jim Veneau, head of Asian fixed income at AXA Investment Managers
“I would not yet call them a safe haven,” said Veneau. “The market is still partially closed/controlled and China is still in the very early stages of deleveraging, a process that was put on hold due to the trade war and Covid.”
On global funds trimming their holdings of China’s government debt for the first time in two years
Dariusz Kowalczyk, chief China economist at Credit Agricole CIB
“While rising Treasury yields always pose a risk of capital outflow from emerging markets, net selling is very rare,” said Kowalczyk. “The data indicate that going forward, foreign interest in CGBs and Chinese bonds in general is likely to be more limited as long as Treasury yields are high or rising, which will be the case for the rest of the year.” “We are in a pause between bond index inclusion by Bloomberg-Barclays and JPMorgan, which has finished, and by WGBI, which will only start in October,” said Kowalczyk. “This means downside risks for inflows into Chinese bonds and upside risks for their yields this year.”
Xing Zhaopeng, senior China strategist at Australia & New Zealand Banking Group Ltd
“Offshore investors may temporarily adjust their holdings of Chinese government bonds but they will not stop buying,” said Xing. “Index flows will restart with the FTSE inclusion beginning in October while a big trade surplus will continue to support the renminbi and offset the strength of the dollar.” 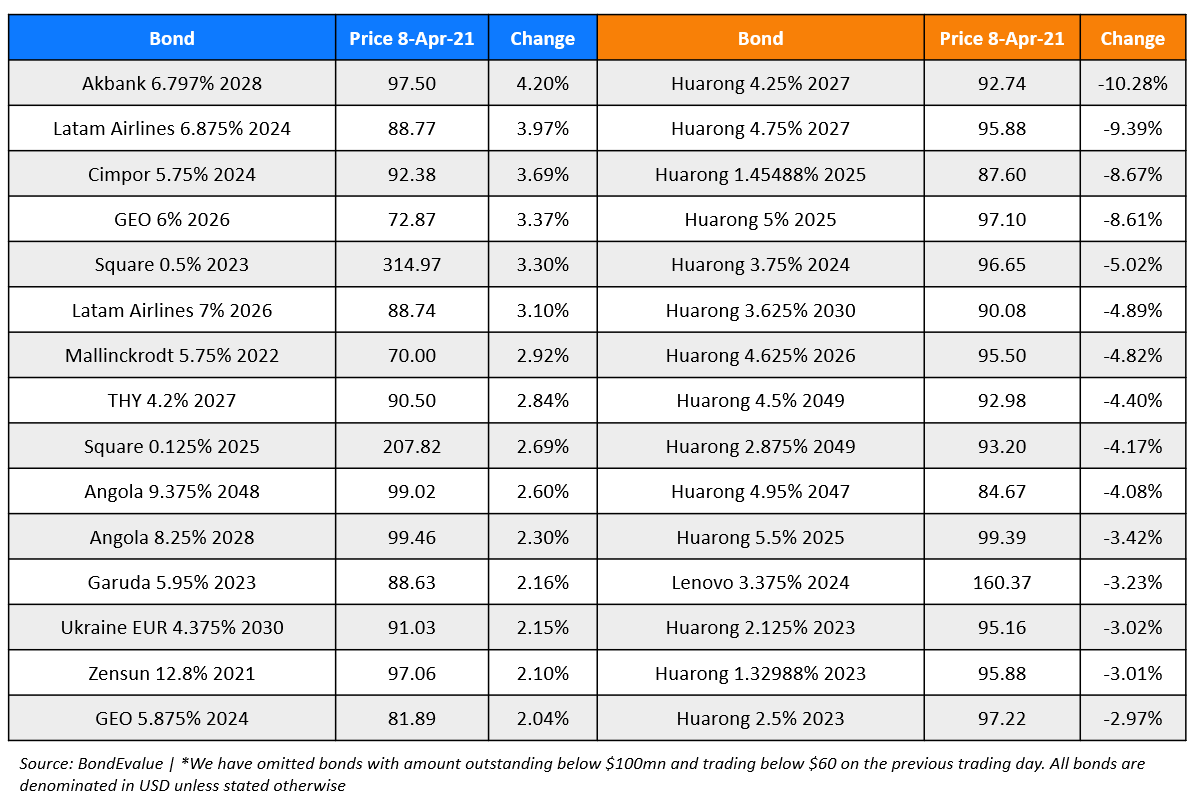