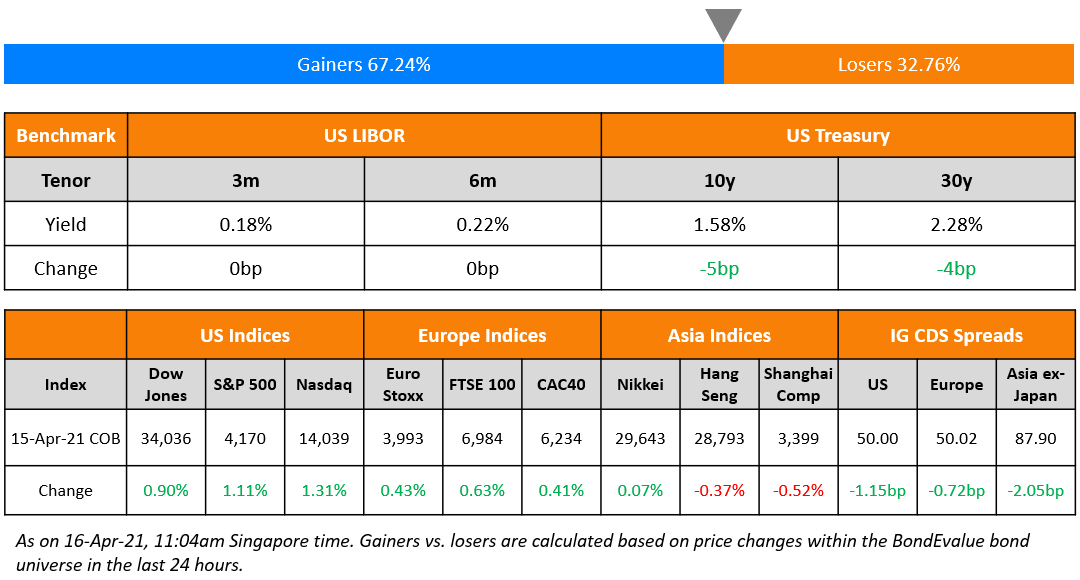 Equities rallied again with S&P up 1.1% and Nasdaq up 1.3%. US macro data surprised to the upside – retail sales in March exploded 9.8% higher, the highest in 10 months and jobless claims for the prior week fell 193k to 576k. Despite the strong macro data, US 10Y yields tumbled 8bp to 1.55%, its lowest in over a month. European equities also gained with the FTSE, DAX and CAC up 0.6%, 0.3% and 0.4%. US IG CDS spreads were 1.2bp tighter and HY was 6.5bp tighter. EU main CDS spreads were 0.7bp tighter and crossover spreads tightened 3bp. China’s GDP grew by a record 18.3% YoY in Q1 2021 – fixed asset investments rose 25.6% and industrial production grew 24.5%.  Asian equity markets are mixed today and Asia ex-Japan CDS spreads are 6bp wider. 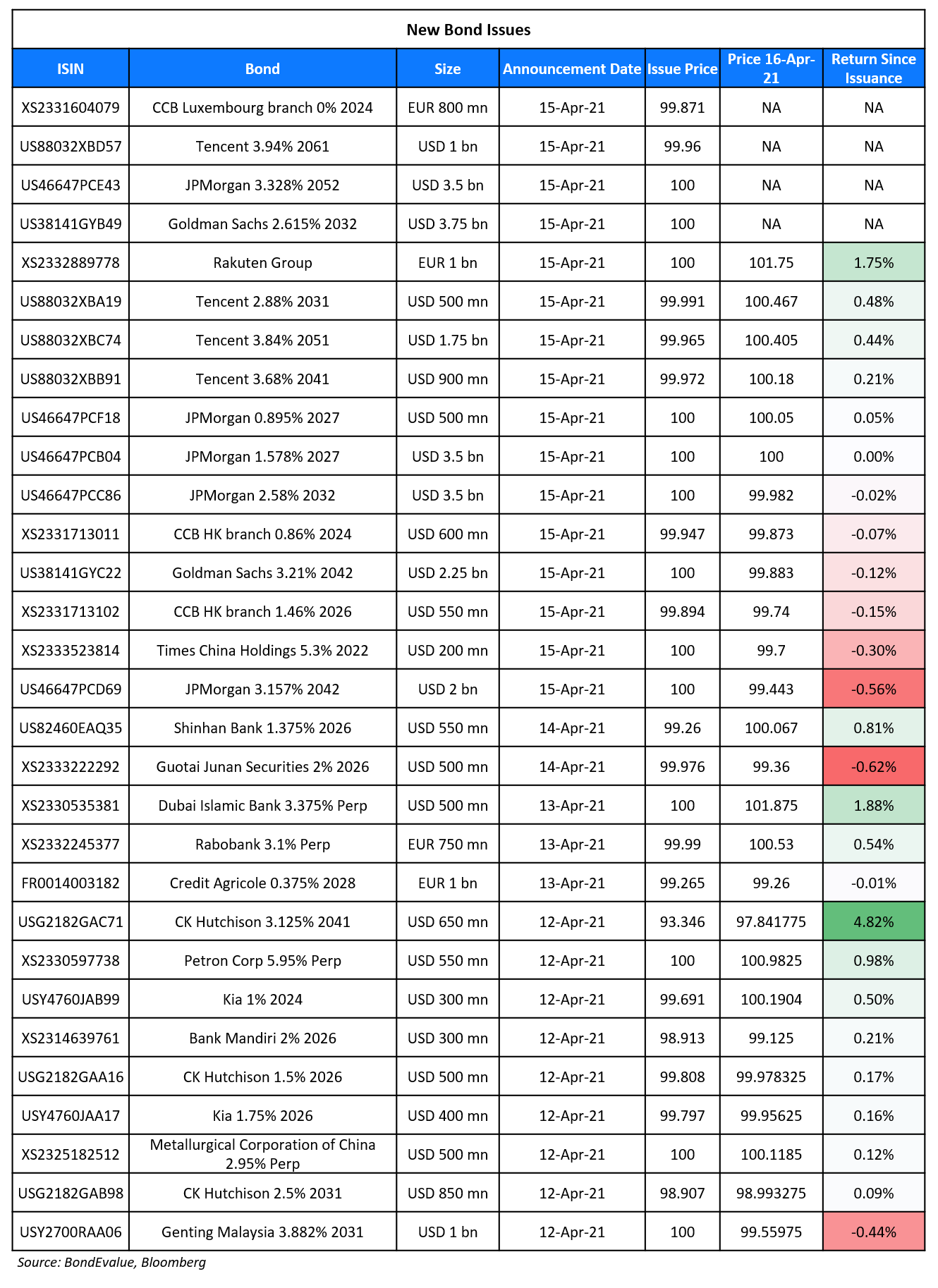 Times China raised $200mn via a 363-day note at a yield of 5.3%. The notes have expected ratings of BB-. The Chinese real estate company plans to use proceeds for offshore debt refinancing.

A Make Whole Call (MWC) is a type of call option on a bond that gives the issuer the right to redeem a bond before its maturity date by compensating (making whole) bondholders for future coupon payments. MWC provisions were introduced in the 1990s and are rarely exercised by issuers. If exercised, the issuer has to pay a lump sum amount to the bondholders that represent the net present value of future foregone coupon payments, typically stated as a formula in the bond prospectus.

Both the bonds in Goldman’s $6bn two-tranche bond offering issued yesterday have MWCs.

On sukuk issuers flocking to the market at a record rate
Sergey Dergachev, senior portfolio manager for emerging-market debt at Union Investment
“Some refinancing of 2022-maturing debt and general financing of budget expenditures on sovereign sides could lead to some diversification of funding sources,” Dergachev said. “Overall lower sensitivity to U.S. rates, which will remain a concern this year, will make” sukuk “very attractive investments in emerging-market portfolios,” he said.
Akber Khan, senior director of asset management at Al Rayan Investment
“The pick-up in sukuk issuance in 2021 is certainly welcome, but the number and value of outstanding sukuk is paltry compared to demand,” said Khan.“Unfortunately, issuance has been virtually stagnant.”

“The economic damage caused by the pandemic is starting to be reflected in levels of insolvency, but government support has postponed rather than prevented the true picture being shown in insolvency levels to date,” said Fitzgerald.
On China dollar bond issuers hit by Huarong debt concerns
Michel Lowy, CEO of SC Lowy
“It’s a good reminder that being state-owned ultimately doesn’t equal sovereign risk, and it’s a reminder to assess … whether the premium that one gets paid for buying into a state-owned enterprise debt is sufficiently rewarding for the risk that one takes,” said Lowy.
Fraser Howie, an independent commentator and author of several books about China’s financial system
“This is not even a state-owned enterprise in some sunset industry .. this is central to the financial infrastructure of the state banking system in China,” said Howie. “Do I think it’ll be allowed to completely default? No I don’t think so. But that’s a bit like saying halfway through the Cuban Missile Crisis, ‘ah go to the beach, it will be fine’. It’s a very real risk at the moment until it’s defused.”.
On Turkish lira dipping on dovish central bank and Russian rouble hit by U.S. sanctions
Nikolay Markov, senior economist at Pictet Asset Management
“What is reassuring is that there’s a bit of continuity from the old governor, with rates on hold and still a hawkish message,” said Markov. “I’m not sure if it will be enough to stabilise the lira in the short-term, but will help keep Turkey afloat, especially if they keep the policy rate unchanged before June. If there is any change, it could be catastrophic.”
Marshall Gittler, head of investment research at BDSwiss
“The figure should help to cement the “risk-on” mood and therefore perhaps be good for stocks but negative for the dollar,” Gittler wrote. 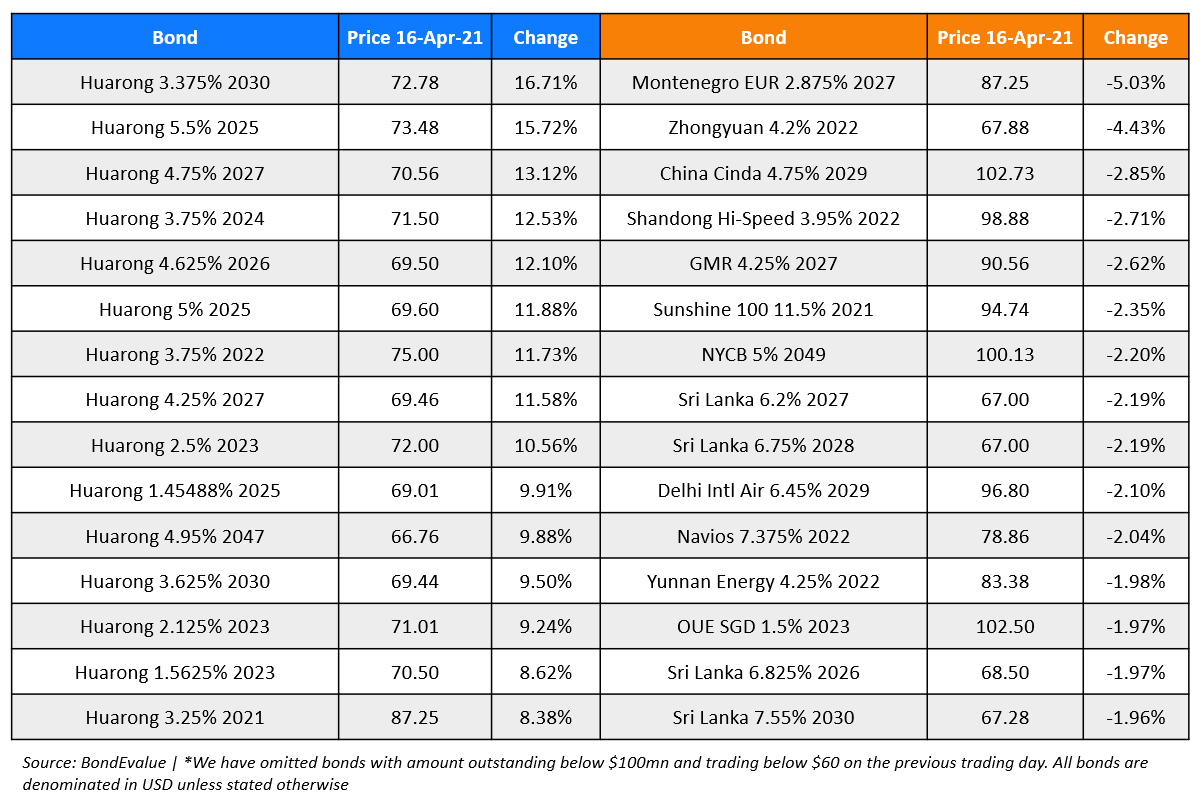