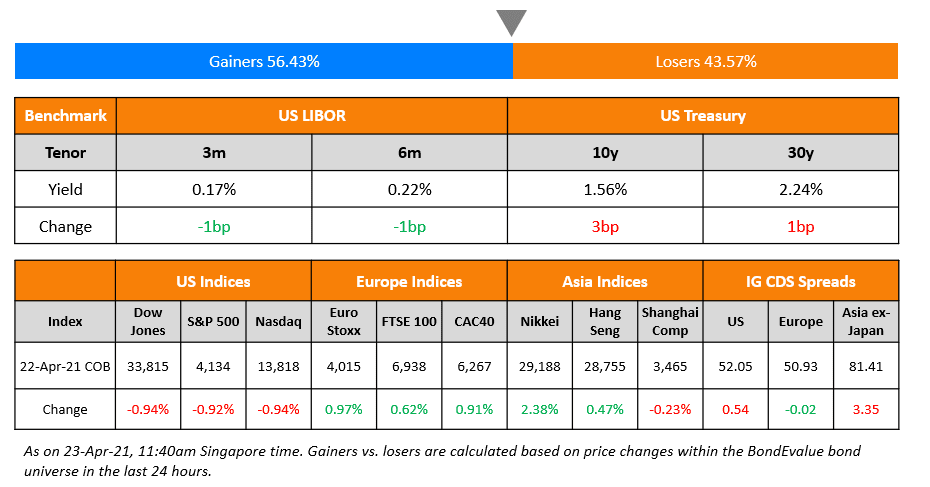 S&P and Nasdaq fell over 0.9% as equities were lower again. Market sentiment was down as US President Joe Biden eyed a tax rate as high as 43.4%, in a proposal to tax the rich as per Bloomberg. US weekly initial jobless claims dropped 39k to a 13-month low of 547k. US10Y yields were 3bp higher at 1.56%. European equities were stronger with DAX up 0.8%, CAC and FTSE up 0.6% and 0.9% respectively. The ECB kept its policy unchanged during its monetary policy meeting yesterday. US IG CDS spreads were 0.5bp tighter and HY was 1.1bp wider. EU main CDS spreads were flat and crossover spreads widened 0.4bp.  Asian equity markets are 0.7% higher today after Wall Street’s losses yesterday and Asia ex-Japan CDS spreads have widened 3.3bp. 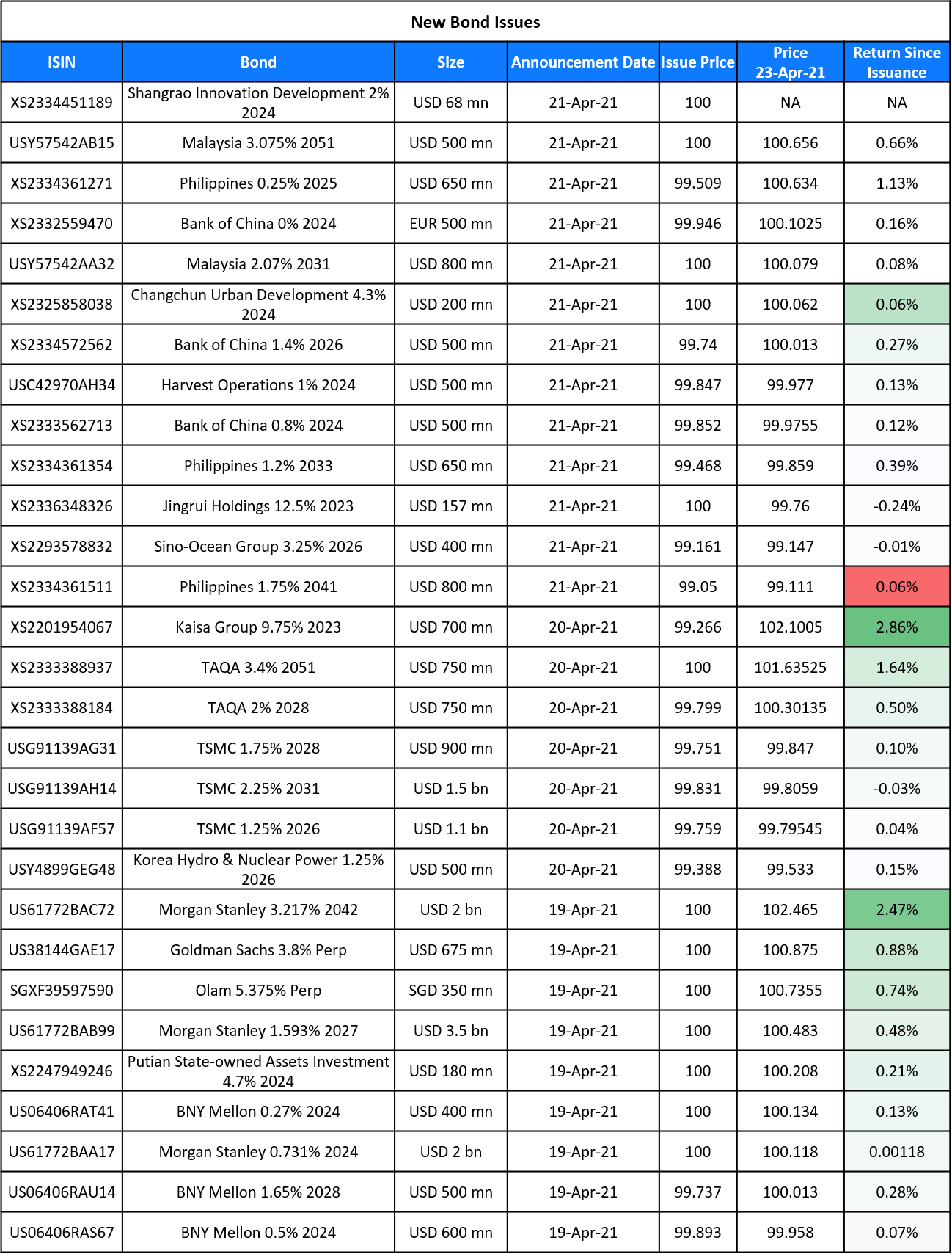 AVIC Automative Systems raised $260mn via a 5Y bond at a yield of 3.1%, 32.5bp inside initial guidance of T+260bp area. The bonds have expected ratings of A3, and received orders over $820mn, 3.2x issue size. Proceeds will be used to repay offshore borrowings and for general corporate purposes.

Pakuwon Jati raised $300mn via a 7NC4 bond at a yield of 4.875%, 32.5bp inside initial guidance of 5.2% area. The bonds have expected ratings of Ba2/BB/BB, and received orders over $2bn, 6.7x issue size. Asia bought 85% and the rest with Europe. Fund/asset managers took 87% and private banks and corporates 13%. The Indonesian real estate company plans to use the proceeds to fully redeem its $250m 5% 2024s and for general corporate purposes.

BOC Aviation raised $750mn via a 3Y bond at a yield of 1.728%, 25bp inside initial guidance of T+165bp area. The bonds have expected ratings of A-/A-. Proceeds will be used for new capital expenditure, general corporate purposes and/or debt refinancing.

“Overall, while the risks surrounding the euro area growth outlook over the near term continue to be on the downside, medium-term risks remain more balanced…Incoming economic data, surveys and high-frequency indicators suggest that economic activity may have contracted again in the first quarter of this year, but point to a resumption of growth in the second quarter. Any phasing out was not discussed and it is just premature.”

“We do think there will be lingering impact on China, particularly investment-grade bond spreads in the foreseeable future… Investors are assessing which sectors with low transparency or high leverage show similarities to Huarong, how government support should be priced going forward and how to interpret*t different reactions in offshore and onshore markets”

On US President Biden Eyeing Tax Rates As High As 43.4% In Next Economic Package

Chuck Grassley of Iowa, a top Republican on the Senate Finance Committee

“It’s going to cut down on investment and cause unemployment. If it ain’t broke, don’t fix it.”

“There ought to be equal treatment for wages and wealth. On the Finance Committee we will be ready to raise whatever sums the Senate Democratic caucus thinks are necessary.” 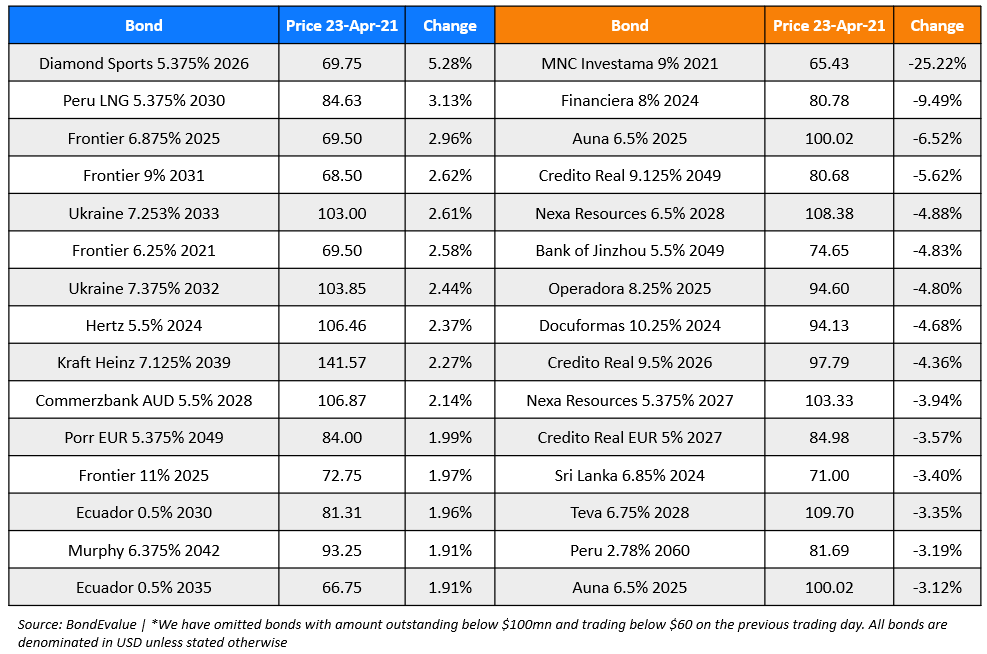