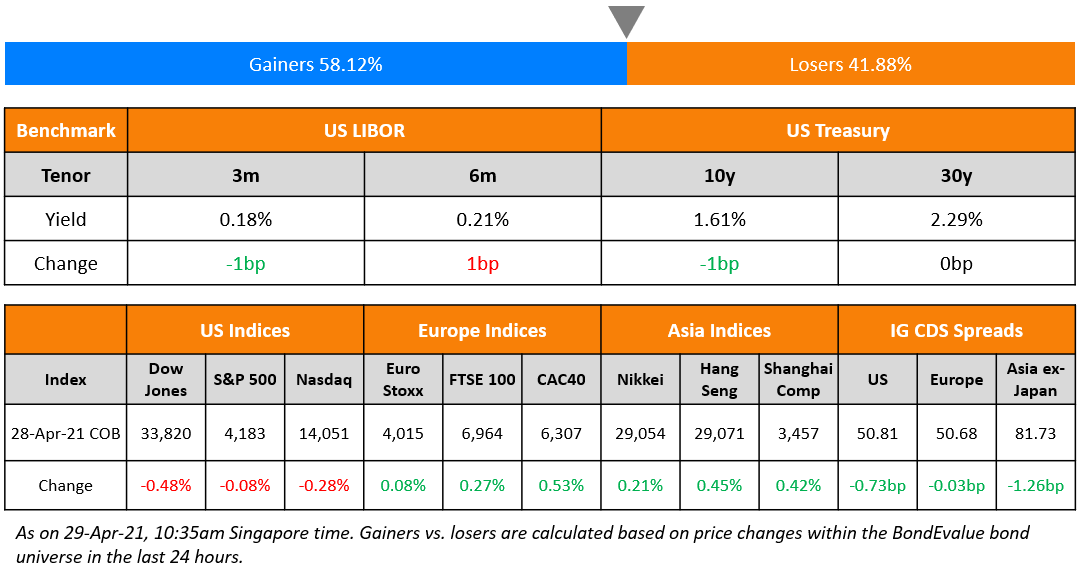 S&P closed 0.1% lower and Nasdaq 0.3% lower. The FOMC maintained its dovish stance with Chairman Jerome Powell saying that it was “not time yet” and that the Fed were a long way from reducing support to the economy. US 10Y Treasury yields dipped on the back of the dovish Fed before ending almost unchanged. European indices were higher with bank stocks benefitting after their results – the FTSE and DAX closed up ~0.3% each and CAC up 0.5%. US IG CDS spreads were 0.7bp tighter and HY tightened 3.6bp. EU main CDS spreads were flat and crossover spreads widened 0.5bp. Asian equity markets are trading higher by 0.3% today and Asia ex-Japan CDS spreads were 1.3bp tighter. 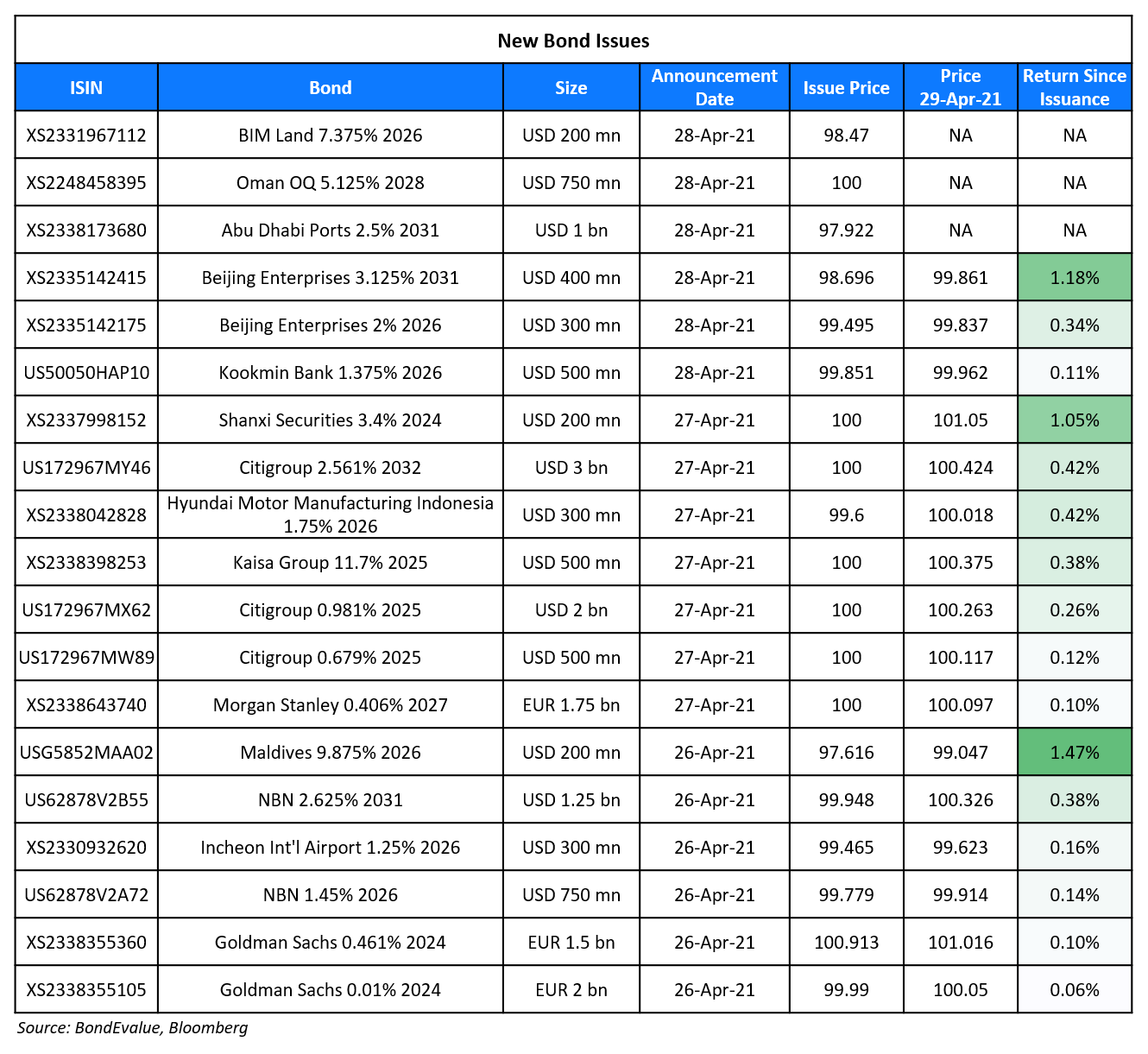 BIM Land raised $200mn via its debut dollar bond, a senior green bond at a yield of 7.75%, 12.5bp inside initial guidance of 7.875% area. The bonds have expected ratings of B2/B, and received orders over $625mn, ~3x issue size. Asia bought 58%, EMEA 41% and the rest went to offshore US investors. Fund/asset managers took 92% and private banks 8%. The Vietnamese property developer plans to use the proceeds to fund eligible green projects as well as for working capital and general corporate purposes.

Kookmin Bank raised $500mn via a 5Y Sustainability bond at a yield of 1.406%, 30bp inside initial guidance of T+85bp area. The bonds have expected ratings of Aa3/A+ and received orders over $2.1bn, 4.2x issue size. Asia took 73%, Europe 16% and the US 11%. Asset managers and insurers bought 47%, banks 33%, central banks and sovereigns, supranationals and agencies 19% and others 1%. Proceeds will be used for eligible projects under the Korean bank’s sustainable financing framework.

Haircut refers to a reduction in value of an asset for the purpose of calculating either margin requirements, level of collateral or salvage value. The haircut is generally stated as a percentage and is the difference between the value of the asset and its reduced value. For example, in a restructuring, if a bond worth $100mn faces a haircut of 20%, then holders would receive only $80mn. In the case of a loan, if the collateral is worth $100mn, a haircut of 30% would imply that a loan of $70mn, giving the lender a cushion in case the market value of the collateral falls. Peking University Founder Group is said to be considering up to a 70% haircut for bondholders as part of a debt restructuring plan.

On Powell waving inflation worries away as Fed holds rates near zero
Jerome Powell, Federal Reserve Chairman
“The economy is beginning to move ahead with real momentum,” Powell said. “An episode of one-time price increases as the economy re-opens is not the same thing as, and is not likely to lead to, persistently higher year-over-year inflation,” he said. “When the time comes for us to talk about talking about it we’ll do that. But that time is not now,” he said. “We’ve had one great jobs report. It’s not enough. We’re going to act on actual data, not on a forecast, and we’re just going to need to see more data. It’s no more complicated than that.” If inflation were to move “persistently and materially above 2% in a manner that threatened to move longer-term inflation expectations materially above 2% we would use our tools to bring inflation expectations down to mandate consistent levels.”
Carl Tannenbaum, chief economist at Northern Trust
“I took away that not even any preliminary discussion of a change in policy is imminent,” said Tannenbaum. “He gave a spirited defense of the Fed’s view on inflation and employment. They are very happy with the course they are on and not likely to change it soon.”
On the Fed still ‘a long way’ from withdrawing monetary support
Jerome Powell, Federal Reserve Chairman
“We’ve had one great jobs report, it’s not enough,” Powell said. “We’re going to act on actual data, not our forecast.” “We’re a long way from our goals,” he added. “We think of bottlenecks as things that in their nature will be resolved as workers and businesses adapt, and we think of them as not calling for a change in monetary policy since they’re temporary and expected to resolve itself,” Powell said. “We know the base effects will disappear in a few months.” “If we see inflation moving materially above 2 per cent in a persistent way that risks inflation expectations drifting up, then we will use our tools to guide inflation and expectations back down to 2 per cent. No one should doubt that we will do that,” he said.
In comments by the Federal Open Market Committee members
“Amid progress on vaccinations and strong policy support, indicators of economic activity and employment have strengthened. The sectors most adversely affected by the pandemic remain weak but have shown improvement,” the committee said.
On yields dropping as Fed’s Powell says it’s too early to talk about tapering
Tom di Galoma, a managing director at Seaport Global Holdings
Powell “made it pretty clear that they are a fairly long way away from tapering,” said di Galoma. “I think the Fed is still quite unsure of how the economy is going to be six months from here.” “With all the money that is being spent … it puts the Fed in a very difficult position to taper,” di Galoma said.
Patrick Leary, chief market strategist and senior trader at Incapital
“It’s just hard to know what transitory is,” said Leary. “I think the market is going to get impatient about the level of inflation and how long it might last, and it might be perceived by the market that that inflation is not transitory, causing a little bit of a revolt, so to speak, in the bond market,” Leary added.
On the shift towards bonds in pension funds
In a note by Nikolaos Panigirtzoglou and team, JPMorgan Chase & Co. strategists
“The big improvement in funding ratios implies a high incentive” for “U.S. private defined benefit pension plans to lock in the recent gains in their funding position by accelerating their de-risking going forward.” That means “accelerating their buying of long-dated bonds and selling of equities.” “So public pension funds have less incentive to de-risk in general,” Panigirtzoglou wrote. “But they do face a problem. Their equity allocation is already very high and their bond allocation stands at a record low of 20%. So, from an asset/liability mismatch point of view they are under some pressure to buy bonds.”
Zorast Wadia, a principal at Milliman
“The main reason for the overall shift from equities into fixed income has had to do with the change in pension regulations,” said Wadia. “And as these pensions’ funding status have improved they have continued to shed equity risk — getting more and more into fixed income.”
Adam Levine, investment director of Aberdeen Standard Investment’s client solutions group
What corporate pension plans “are looking for is to be well funded, not necessarily to get strong returns,” said Levine. “It is possible that as rates rise, corporate pensions move enough to the fixed income that to some degree it counters the rise in rates. You can certainly make that case if the moves are big enough and the industry is big enough.”

Sunil Subramaniam, managing director of Sundaram Asset Management Co
“One can’t expect there will be good news on the economy, good news on earnings and stock prices will go up,” said Subramaniam. “It is undoubtedly going to be a volatile period for the market.”
Vikas Goel, managing director and chief executive officer at PNB Gilts Ltd
“Markets are getting cautious on the credit side as economic growth is seen slowing down, raising concerns distressed debt may rise,” said Goel.