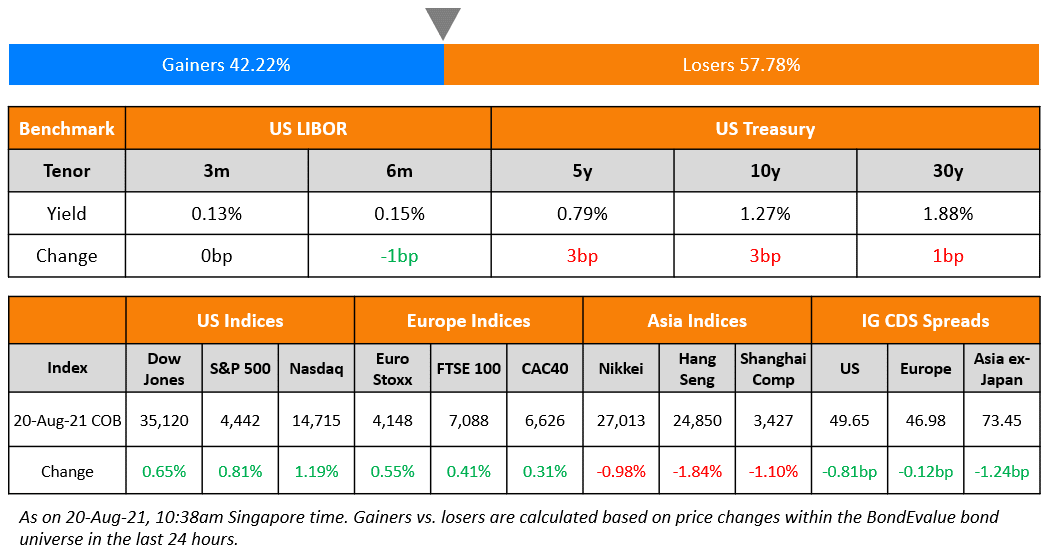 US markets ended stronger on Friday but closed out a losing week  – S&P and Nasdaq gained 0.8% and 1.2% on Friday while the indices shed 0.6% and 0.7% during the week. All sectors ended the day in the green with IT and Utilities leading the gains, up 1.3% and 1.2% respectively. European bourses also gained on Friday while posting a weekly decline – FTSE was up 0.4% and CAC and DAX were up 0.3%. UAE’s ADX gained 0.8% while Saudi’s TASI extended it losses, down 1.1%. Brazil’s Bovespa extended its gains and was up 0.8%. Most Asian markets started in the green – HSI, Shanghai and Nikkei are up between 1.1-2.1% while Singapore’s STI is up marginally at 0.15%. US 10Y Treasury yields gained 3bp to 1.27%. US IG tightened by 0.8bp while the HY CDS spreads tightened 4.6bp. EU Main and Crossover CDS spreads tightened 0.1bp and 0.8bp respectively. Asia ex-Japan CDS spreads were  1.2bp tighter.

According to CNBC, Barclays equity strategists said, “With Fed tapering coming while delta variant keeps spreading, the transition away from liquidity/policy regime to more mid-cycle markets means we may experience a bumpier ride ahead,” while adding, “Market narrative may thus turn more cautious, as concerns about peaking growth rates, delta variant and policy mistake may prove headwinds, at a time when seasonality and technicals are unfavorable.”

Navigating The Bond Markets by Leveraging the BEV App | Aug 25

New to the BondEvalue App? We will be conducting a complimentary session on Navigating The Bond Markets by Leveraging the BEV App on August 25, 2021. This session is aimed at helping bond investors in tracking their investments using the BondEvalue App. Click on the banner below to register.

Quantitative easing (QE) is a form of unconventional monetary policy whereby a Central Bank purchases assets such as existing government bonds so as to pump money directly into the economy. This increase in money supply is meant to encourage financial institutions to lend more money to businesses and individuals. QE is regarded as a last resort to stimulate spending in an economy when a reduction in interest rates do not work alone. It also bears with it the risk of creating an inflationary pressure in the economy. Most major central banks in the world such as the US Fed, Bank of England, Bank of Japan and the ECB are all undertaking QE measures in a bid to help their respective economies fight the negative impact of the ongoing Covid-19 pandemic.

The discussion on reversing the quantitative easing policy will be the main theme of the Fed’s Jackson Hole symposium this Friday.

On the view that foreign investors should feel ‘anxiety’ about China – Lawrence Summers, former US Treasury Secretary
“Bad things keep happening, adverse surprises keep happening,” Summers said. “The risks for foreign investors are going up — and have to be going up at a time when the greater insertion of the Communist Party into every private enterprise is emerging as a very important priority for the Chinese government.” “It’s certainly a riskier environment and when you have a riskier environment people demand much higher returns,” he said.
On first-time issuers helping to fuel junk bond rally – John McClain, portfolio manager at Brandywine Global
“We’ve seen record issuance [in high yield], so a lot of companies can slip through the cracks,” he said. “We think that’s an inefficiency investors should be exploiting.”
On China’s slow bond sales delaying infrastructure boost
Chen Kang, analyst at Northeast Securities
“Infrastructure investment usually rises three-to-six months after local government bonds are issued, and so bonds issued after September will hardly have any impact on infrastructure investment this year.”
Li Qilin, chief economist at Hongta Securities Co
“The rapid growth of infrastructure investment in the past has a lot to do with the expansion of hidden debt.” “That’s been curbed this year so even if the special bond quota is increased, it is difficult for infrastructure to recover quickly.”

“At the end of 2014 there was 5 billion ISB (International Sovereign Bonds),” Cabraal said. “But when we came back in December 2019 there was 15 billion dollars of ISBs pending.” “Nearly 7 billion dollars were raised during a period 15 months from April 2018 to May 2019,” he said.
On the bets on Zambia paying off as bonds rally
Samy Muaddi, portfolio manager at T. Rowe Price
“Following the default there was much panic and uncertainty,” Muaddi said. “Having invested in the recovery of many countries following periods of debt distress we took a contrarian view.” “There are still many challenges for Zambia to work through,” said Muaddi. “Restoring market access after such a crisis requires a steadfast commitment to sustainable macroeconomic policy.”
Ray Jian, emerging-market portfolio manager at Amundi
On incoming Zambian president Hakainde Hichilema, “Hichilema’s economic platform is based on private sector-led liberal market reform, which bodes well for the IMF program.” “We do believe the cure of the bond default is one of Hichilema’s priorities, as a more market-based Zambia economy needs the bond market to partially finance its reform and growth program.”
Aleix Montana, Africa analyst at risk intelligence company Verisk Maplecroft
“An IMF bailout would facilitate the restructuring of Zambia’s debt and increase the likelihood of it being accepted in other debt-assistance programs.” “Zambia’s commitment to reforming its public finances will be judged on the outcome of the negotiations with the IMF.” 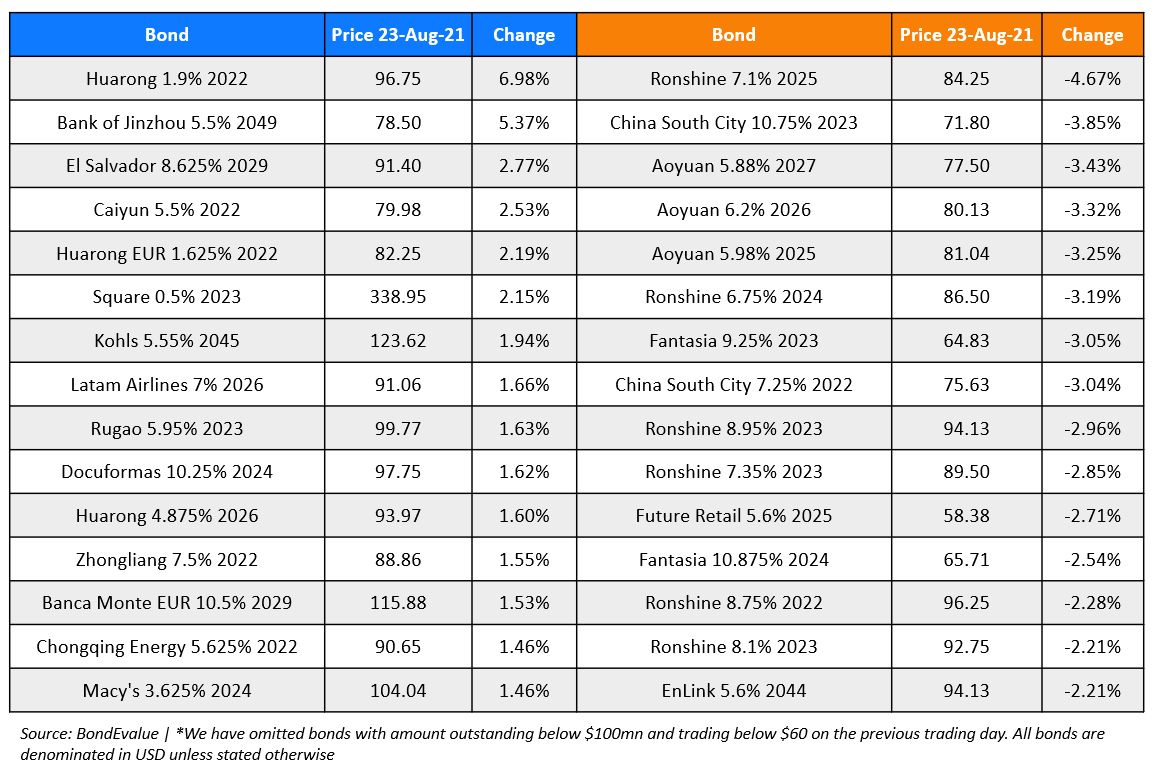