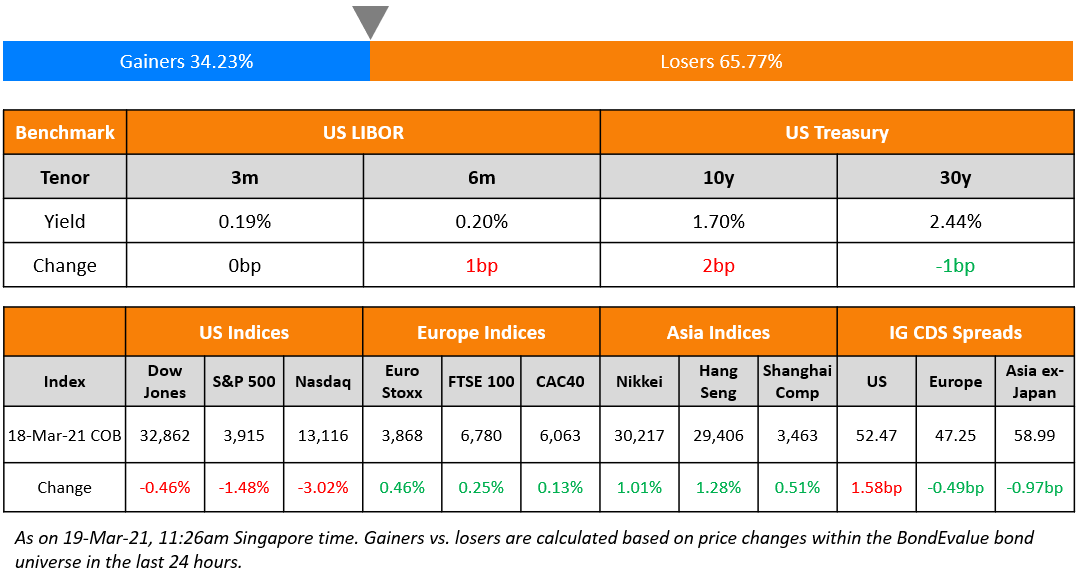 US equities fell yesterday with the S&P down 1.5% while the tech heavy Nasdaq slipped over 3%. Apple, Amazon and Netflix fell over 3.4%. The only sector in the green was financials, up 0.6%. The fall in equities came after the 10Y Treasury yield shot to 1.75% and then pulled back to 1.70%. US Philly Fed Manufacturing Index printed at a massive 51.8 vs. a forecast of 23, its highest level in almost 48 years while US jobless claims for the prior week was up 45k to 770k vs. the 700k forecast. European equities ended higher with the DAX up 1.2% while the FTSE and CAC were up 0.3% and 0.1%. US IG CDS spreads were 1.6bp wider and HY was 12bp wider. EU main CDS spreads were 0.5bp tighter and crossover spreads tightened 1.6bp. Asian equity markets have opened lower ~1% and Asia ex-Japan CDS spreads are tighter 1bp. 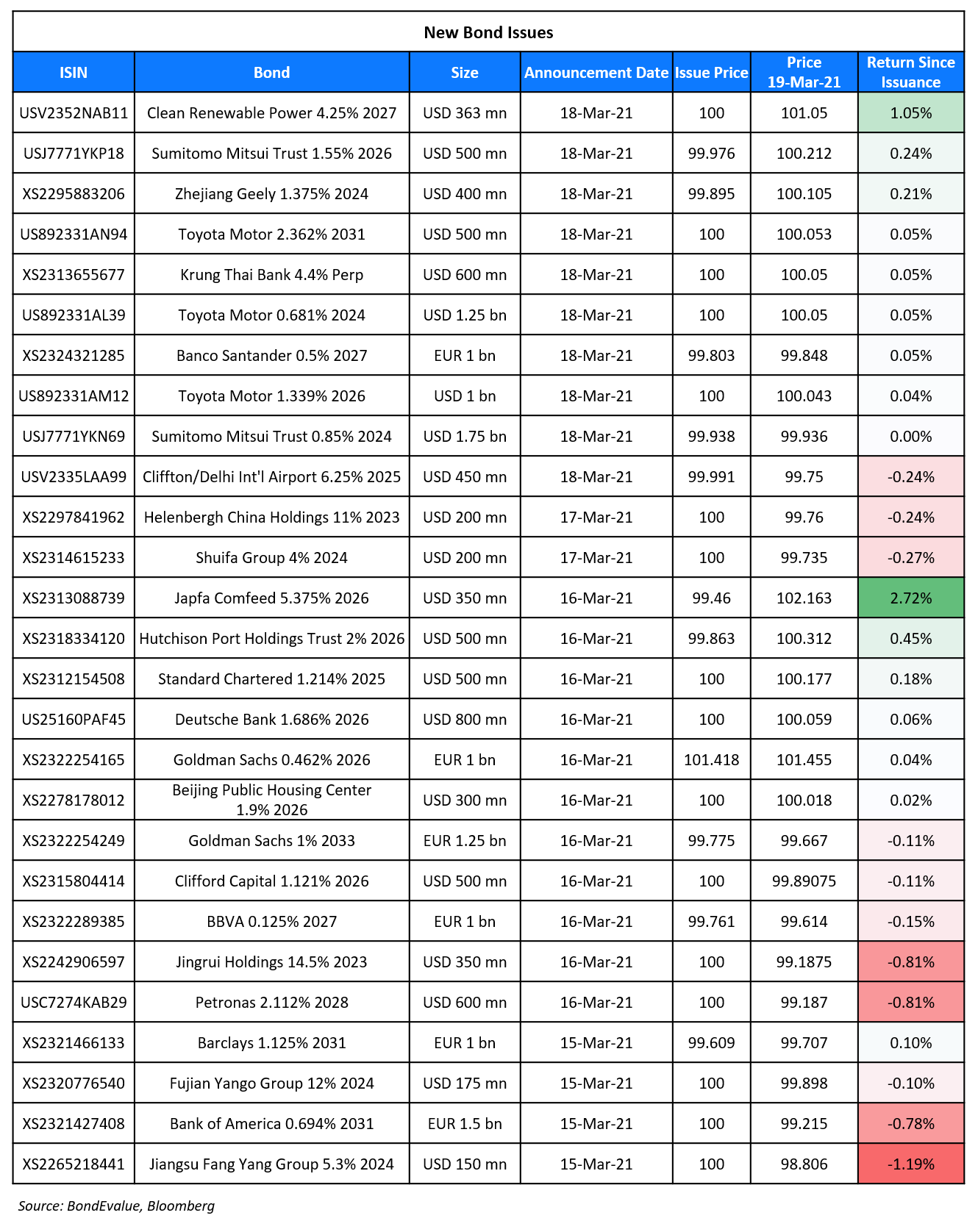 Clean Renewable Power/Hero Future Energies (HFE) raised $363mn via a 6Y green amortizing bond at a yield of 4.25%, 50bp inside initial guidance of 4.75% area. The bonds have expected ratings of Ba2/BB-. The weighted average life (WAL) is 5.25 years. Proceeds will be used to subscribe to rupee denominated bonds issued by the subsidiaries, which will in turn use the funds to repay external debt and intercompany loans, as well as for general corporate purposes. HFE is an independent power producer in India, established by Indian auto major Hero MotoCorp.

Krung Thai Bank raised $600mn via a Perpetual non-call 5Y (PerpNC5) AT1 bond at a yield of 4.4%, 45bp inside initial guidance of 4.85% area. The bonds have expected ratings of Ba3, and received orders over $2.3bn, 3.8x issue size. Fund managers bought 87%, private banks 7%, insurers and pension funds 4% and banks 2%. Asia took 74%, EMEA 16% and offshore US investors/others 10%. Proceeds will be used for funding and general corporate purposes. There is no coupon step-up but the coupon resets every five years from 2026 to the then prevailing Treasury yield plus the initial spread. The bonds will be permanently written-down if the bank’s CET1 ratio is less than 5.15%, or partially written down if there is a non-viability event as per the Bank of Thailand. The bonds also have a dividend stopper.

Zhejiang Geely raised $400mn via a 3Y bond at a yield of 1.411%, or T+108bp, a strong 52bp inside initial guidance of T+160bp area. The bonds have expected ratings of A1, and received orders over $4.1bn, 10x issue size. Asset/fund managers bought 47%, banks and financial institutions 47%, insurance cos 3%, private banks/others 3%. APAC took 92% and MENA 8%. LEVC Finance is the issuer, while Bank of China Singapore branch (A1/A/A) is the standby letter of credit (SBLC, Term of the Day, explained below) provider. Zhejiang Geely Holding Group is the keepwell provider. Proceeds will be used to refinance offshore bonds due May 2021.

The bonds have expected ratings of A1/A. Proceeds of the 3Y will be used for general corporate purposes, while the 5Y green bond’s proceeds will be used for financing or refinancing eligible green projects as defined in the Japanese trust bank’s green bond framework.

The bonds have expected ratings of A1/A+. Besides other projects, proceeds will also be used for the reduction of CO2 emissions at plants and offices through investments, expenditures, and funding related to renewable energy.

Standby Letter of Credit (SBLC) is a note issued by the buyer’s bank to the seller’s bank, where the former guarantees to pay a sum of money to the latter if the buyer defaults on the agreement. Commonly, in the shipping of goods, SBLCs are used to reduce risks associated with the transaction on unforeseen events leading to a default.

Bonds backed by the above structure are called SBLC-Backed Bonds. Unlike guarantees, which are direct obligations of a bank to cover the timely payment of related bonds, SBLCs require trustees of the bonds to provide demand notices to the banks in the event that issuers fail to make bond payments. Thus as Moody’s says, more analysis is required on whether the language of SBLCs and transaction mechanisms support timely payments.

On Treasuries flustering dollar bears as yields rise toward 2%
Chris Turner, a currency strategist at ING
“We are officially bearish on the dollar — but this near disorderly selloff in Treasuries could delay that decline, as higher U.S. yields prompt a re-pricing of risk assets,” said Turner. “With the dovish Fed leaving the long end of the U.S. Treasury market unprotected, the market is wary of just how quickly U.S. 10-year yields hit 2%.”
Sebastien Galy of Nordea Investment
“The Fed is credible enough for the second path to dominate,” Galy said, adding that he sees the euro-dollar pair dropping to $1.15 by year-end, from about $1.19 now.
Kristen Macleod, co-head of global currency sales at Barclays
The “low yielders,” such as the euro and the yen, “are likely to underperform on a more medium-term horizon given the widening of rate differentials,” Macleod added.
Chris Osmond, chief investment officer at Prime Capital Investment Advisors
“Actual growth exceeding expected growth, leading to a more robust labor market, will ultimately lead to higher sustained inflation,” Osmond said. “Should this happen, the Fed is almost certain to change their current rhetoric, and look to start normalizing sooner than what is currently being telegraphed.”
On Treasury yields breaching key levels as traders boosted bets the Federal Reserve will allow inflation to overshoot
Ian Lyngen, BMO Capital Markets
“Powell has given the green light to higher 10- and 30-year yields as progress out of the pandemic accelerates,” said Lyngen. “Underlying inflation expectations remain elevated and will remain a bedrock of the bearish trend in Treasuries until those assumptions are challenged. For now, it doesn’t pay to fight the cheaper and steeper yield curve.”
In a note by ING Groep NV strategists led by Padhraic Garvey
“The overall tone from the Fed leaves the back end of the curve largely unprotected,” they wrote. There is “no real barrier to a test higher in the 10-year yield in the coming weeks.”
Richard McGuire, the head of rates strategy at Rabobank
“The Fed’s steady as she goes approach may clarify the fact that it intends to be reactive than pre-emptive but this does not address the uncertainty regarding the outlook for inflation,” said McGuire. “Investors cannot rely upon the bank getting ahead of the curve should that prove necessary.”
On Bank of England passing on opportunity to confront a surge in bond yields
Luke Bartholomew, senior economist at Aberdeen Standard Investments
“The bank seems relatively comfortable with the idea that the market moves reflect an improving growth and inflation outlook rather than an adverse and undesirable tightening in financial conditions,” said Bartholomew.
In a statement by the Bank of England
“There was a range of views across MPC members on the degree of spare capacity in the economy currently, whether demand would outstrip supply during the recovery from the pandemic,” the BOE said.
On European bond sale order books reaching ‘ridiculous’ levels
Lyn Graham-Taylor, senior rates strategist at Rabobank
“Back in the day, an order book was viewed as a reasonable gauge of demand,” said Graham-Taylor. The size of order books started to rise in 2017, he said, but “skyrocketed” in 2020 and so far this year, reaching “frankly ridiculous numbers”. “Banks’ ability to warehouse bonds has been reduced and therefore it’s more difficult to get bonds in size,” said Graham-Taylor.
Kerr Finlayson, head of the frequent borrowers group at NatWest Markets
“Headline orders suggest issuers can tighten pricing quite a lot, but some of the demand remains very sensitive and will drop if prices tighten,” said Finlayson.  “You can’t just say that because you have a €100bn book that you can set any price you want. You need to balance the high-quality ‘buy-and-hold’ versus the fast money.”
Sir Robert Stheeman, the head of the UK’s Debt Management Office
“This behaviour, which has been observed across government bond syndications internationally, can result in sizeable but potentially misleading order books and therefore should not be taken as an indicator of the level of demand,” he wrote.
On record defaults hitting weak Chinese firms as liquidity tightens
Carol Liao, China economist at Pimco Asia Ltd
“As credit policy normalizes, it will be more difficult to roll over debt and we expect to see more defaults in the quarters to come,” said Liao.
Edmund Goh, Asia fixed-income investment director at Aberdeen Standard Investments
“We definitely will be even more prudent with name selection now as most of these entities still rely on an active primary market” to roll over debt and require fresh capital inflows, said Goh. 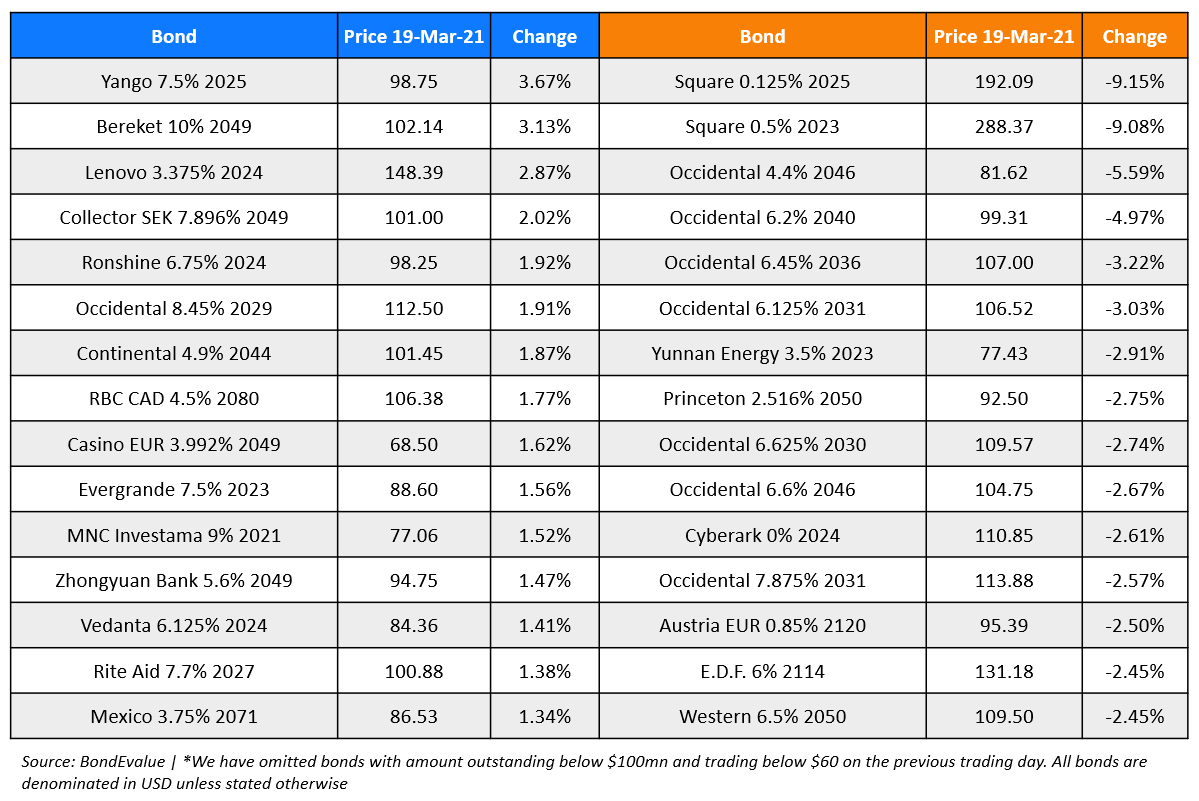