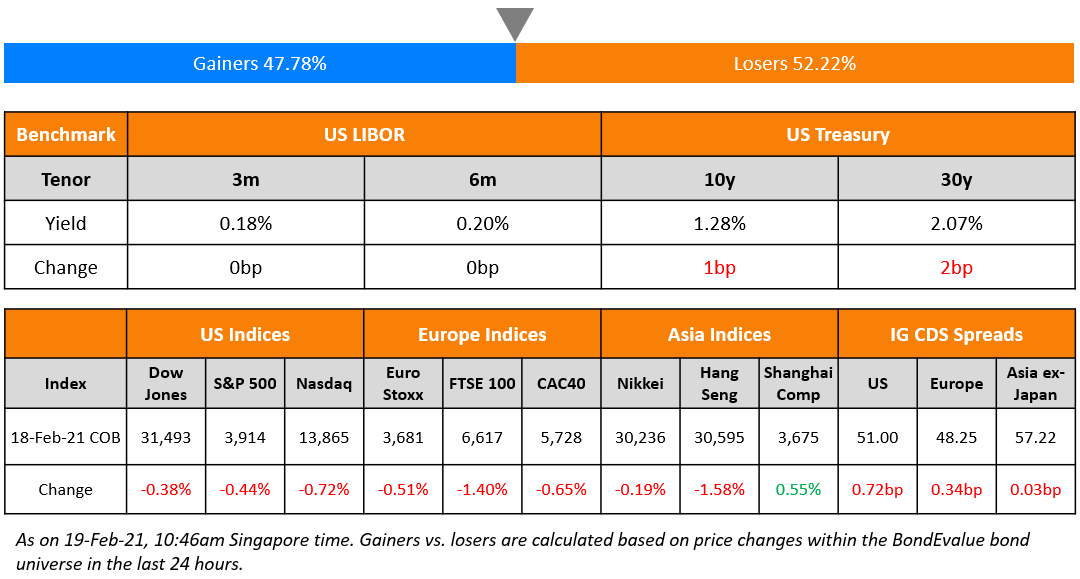 S&P and Nasdaq ended 0.4% and 0.7% lower after falling over 1.2% at the open. US 10Y Treasury yields were stable at 1.28%. Macro data came in weaker as US weekly initial claims rose to 861k, worse than forecasts of 765k. European indices also fell ~0.4% with the German Bund yields climbing 3bp to -0.34%. US IG CDS spreads were 0.7bp wider and HY was 4.6bp wider. EU main CDS spreads widened 0.3bp and crossover spreads widened 3.4bp. Asian equity markets have started softer echoing global equities, down 0.6-1% while Asia ex-Japan CDS spreads were flat.

New to the BEV App? BondEvalue will be conducting a complimentary session on Navigating The Bond Markets by Leveraging the BEV App next Wednesday, February 24. This session is aimed at helping bond investors in tracking their investments using the BondEvalue App.

China Ping An Insurance Overseas (Holdings) raised $250mn via a 10Y bond at a yield of 3.016%, or T+172bp, 43bp inside initial guidance of T+215bp area. The bonds have expected ratings of Baa2 and received orders over $3.6bn, 14.4x issue size. Proceeds will be used for general working capital purposes. The bonds have a change of control put at 101 when Ping An Insurance Group Co. of China Ltd ceases to own directly/indirectly 100% of the issued share capital of the company and/or the issuer. Wholly-owned subsidiary Vigorous Champion International is the issuer and China Ping An Insurance Overseas is the guarantor. Ping An Insurance Group is CFLD’s second-largest shareholder with a 25% stake held via Ping An Life Insurance Company of China and other entities or investment portfolios.

Orchid bonds, named after Singapore’s national flower, are bonds issued under the SGX’s orchid bond structure where investors will be able to buy bonds issued in Singapore using assets held at Euroclear in Belgium. As per the FT, this is a change from the previous system where investors had to set up an account at a securities depository in Singapore to invest in bonds, which led to splitting their funds across geographies and slowed down settlements. For the current time period, orchid bonds will be issued by Singapore borrowers with the first deal expected this year. The structure will slowly cover issuers across south east Asia too.

On the need for $1.9 trillion in pandemic-relief spending even with recent strength in retail sales and US stock values – Janet Yellen, US Treasury Secretary

“It’s very important to have a big package that addresses the pain this has caused,” Yellen said. “The price of doing too little is much larger than the price of doing something big.” “We could be back to full employment next year,” Yellen said. Tax increases will “pay for at least part of [the recovery package] — that would probably phase in slowly over time,” she said.

“While valuations are very high, in a world of very low interest rates” measures such as price-to-earnings multiples do “tend to be high,” Yellen said. “That said, there may be sectors where we should be very careful.” Asked about Bitcoin, Yellen said, “It’s important to make sure that it is not used as a vehicle for illicit transactions and that there’s investor protection.”

On the risk to stocks from rising yields – Isabel Schnabel, European Central Bank Executive Board member

“Stock prices could eventually become vulnerable to a rise in real yields globally,” Schnabel said. “A more sustained rise in real rates could rapidly lower the relative attractiveness of equities and thereby pose the risk of a more broad-based repricing.”

“Yields jumping has a tremendous effect on all assets. The pace of that yield jump would ripple through all the various different assets and countries,” said Hill.

“The rates market is slowly buying into the idea of a robust economy and figuring how to price that in,” Graff said.

“Treasury yields gradually going higher is not a bad thing, in fact from a fixed income point of view this is very healthy and will help us position in a more balanced way in the future,” wrote Holman.

“A rise in yields is definitely welcome,” said Kimball. “I’m sick of buying bonds with a 1% coupon.”

“It will take significant creativity to find attractive opportunities in such a low interest-rate environment,” he wrote.

“You’re going to have insurance companies, pension managers, and foreign investors that see those higher yields and think they look pretty attractive,” he said.

On Airbus CEO’s warning note over pace of aviation recovery

“It is very likely that 2022 will still be constrained by demand,” he said. “It will be much stronger than 2021 but probably not yet at [previous] production capacity.” “We have to place this in the perspective of the new wave of disruption coming in aviation. New ways of propulsion will significantly impact the aerostructure,” he said. “The connection between the design [of the aircraft] and the industrial system . . . has to remain in Airbus.”

Sandy Morris, aerospace analyst at Jefferies investment bank
“It is hard to reconcile the guidance with what we saw in the third quarter and what we think unfolded in the fourth,” said Morris. “We believed a sound base had emerged upon which to model forecasts. The guidance implies otherwise.”

Charles Armitage, analyst at Citi
“Flat aircraft deliveries guidance looks conservative,” said Armitage. “Consensus deliveries [for 2021] are in the 620-630 range . . . We estimate [the] 64 aircraft difference is worth about €1bn in Ebit [earnings before interest and taxes], which explains most of the [guided] profit shortfall and much of the free cash flow shortfall.” 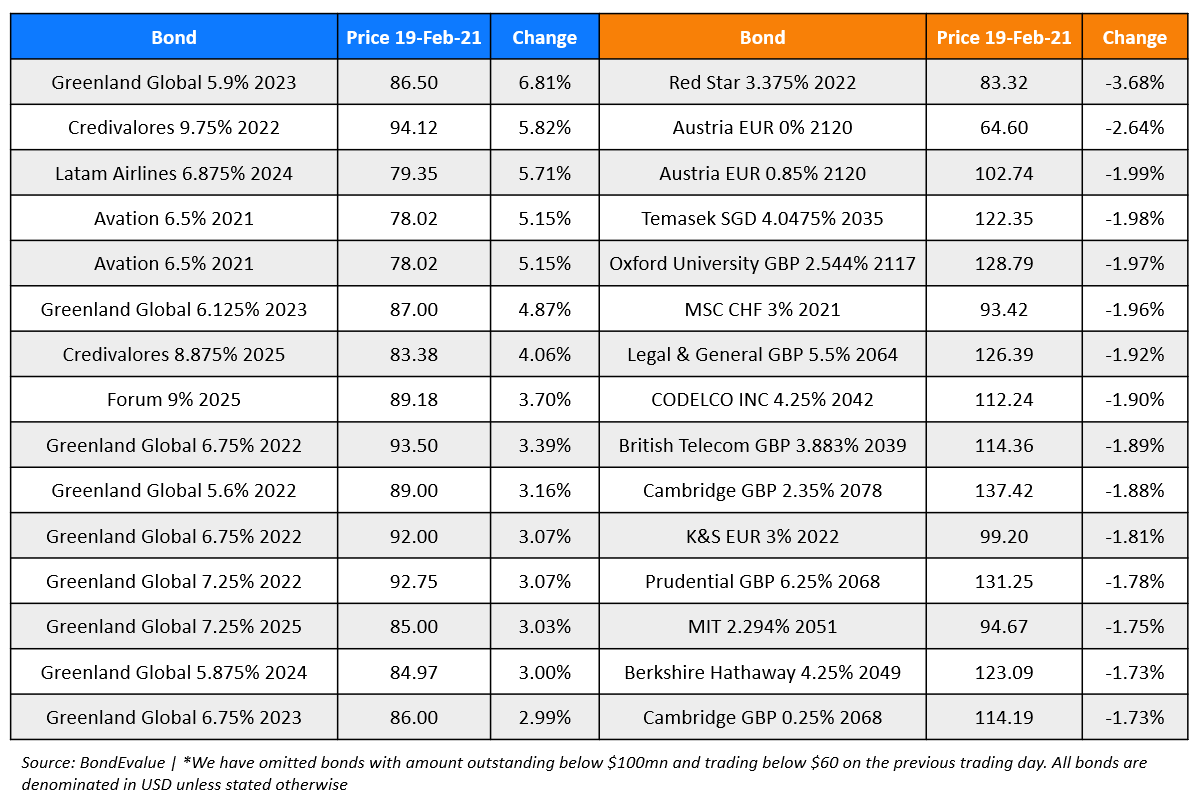