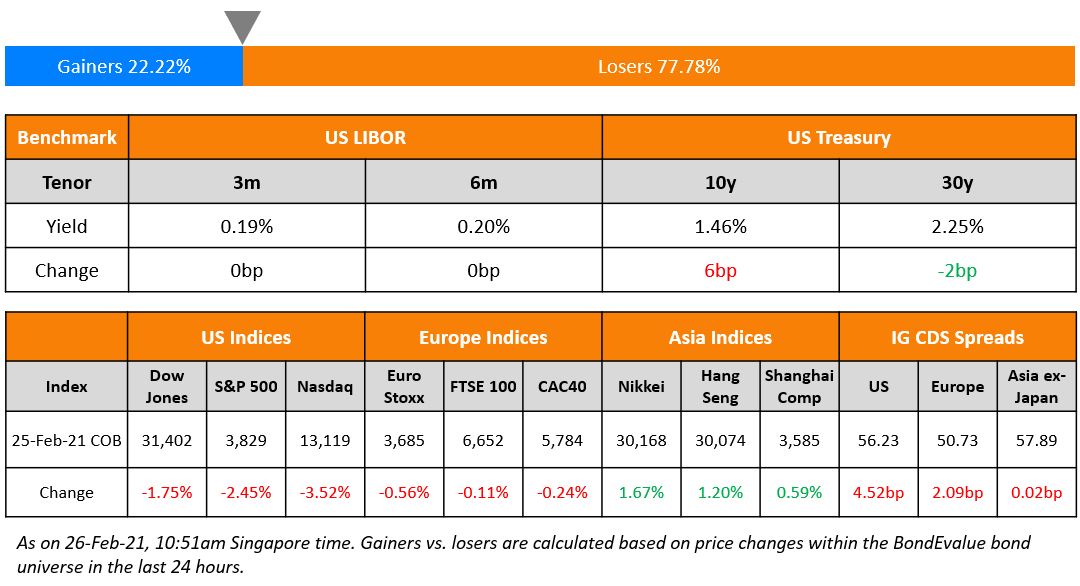 Markets sold-off across asset classes with the S&P down 2.4% while the Nasdaq plunged 3.5%, its worst fall in four months. Popular stocks with rich valuations like Tesla, Square, Zoom fell over 8%, 4% and 5% while most FAANG stocks were down over 3% with the exception of Netflix, which was down 1.2%.The US 10Y Treasury yield spiked to an intraday high of 1.61% after a weak 7Y note auction whilst easing after that to close ~6bp higher. European equities posted relatively modest losses of ~0.3-0.5%. US IG CDS spreads were 4.5bp wider and HY was 20.7bp wider. EU main CDS spreads widened 2.9bp and crossover spreads widened 11.2bp. Asian equity markets have opened ~2% lower today while Asia ex-Japan CDS spreads are flat.

Register before the end of the month for the Bond Traders’ Masterclasses scheduled for late-March and early-April to get a 25% + 10% discount on the bundle package of five modules. Click on the image below to register. 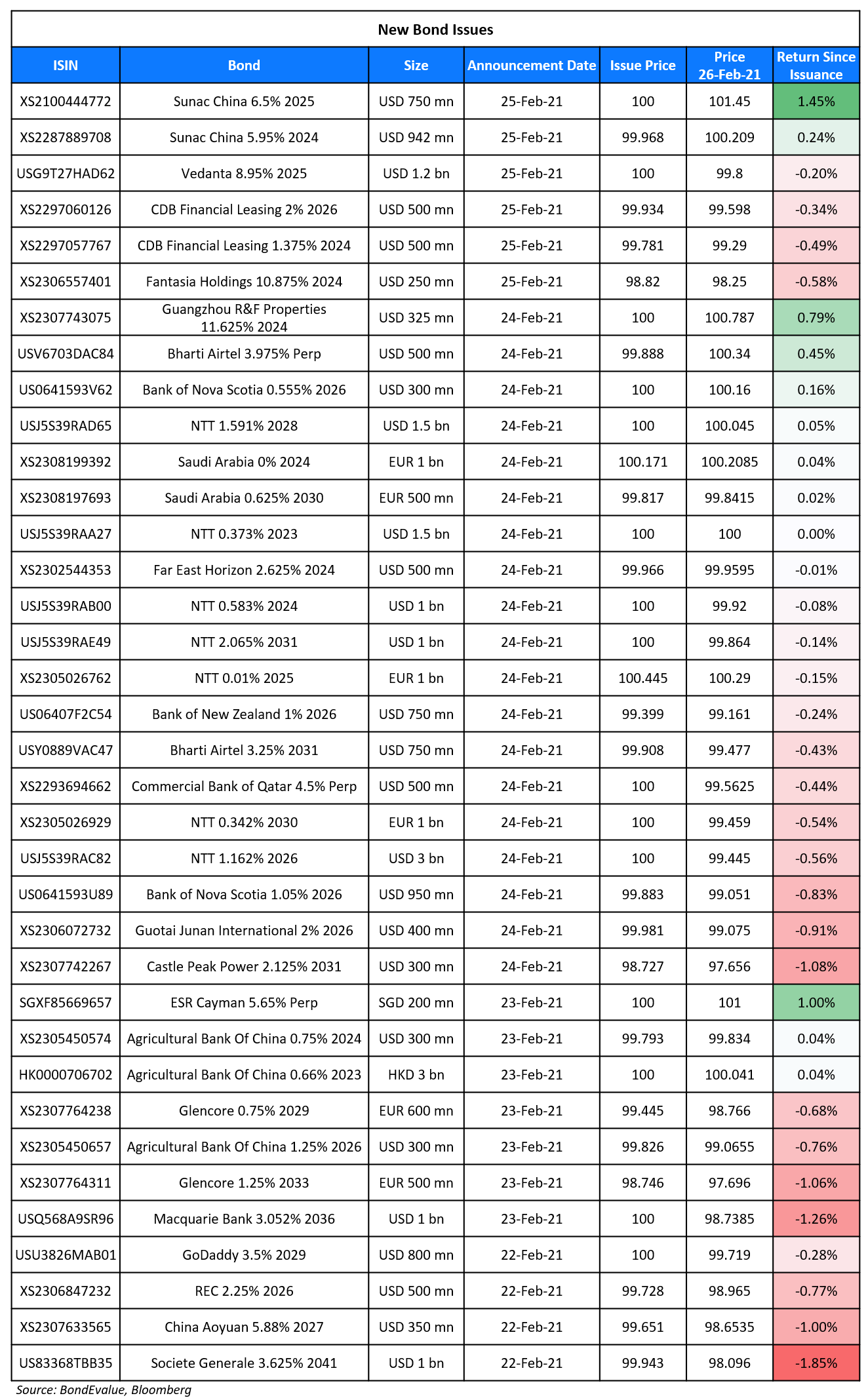 Fantasia Holdings raised $250mn via a 3Y non-call 2Y (3NC2) bond at a yield of 11.35%, 25bp inside initial price guidance of 11.6% area. The bonds have an expected rating of B+ and received orders over $1.3bn, 5.2x issue size. Asian took 92% and EMEA 8%. Asset/fund managers received 70%, private banks and corporates 26%, and banks and financial institutions 4%. The Hong Kong-listed Chinese property developer plans to use the proceeds for offshore debt refinancing.

The bonds have expected ratings of A2/A+. CDBL Funding 2 is the issuer and CDB Leasing (International) Company is the guarantor. The leasing arm of China Development Bank is the keepwell and asset purchase deed provider. Proceeds will be used for working capital and general corporate purposes.

Qingdao China Prosperity State-owned Capital raised $600mn via a 3Y bond at a yield of 2.98%, 37bp inside initial guidance of 3.35% area. The bonds have expected ratings of BBB, and received orders over $2bn, 3.3x issue size. Asia bought 97% and EMEA 3%. Banks and financial institutions were allocated 79%, fund managers and asset managers 16%, and private banks 5%. Proceeds will be used for refinancing offshore debts, project construction and working capital. The bonds are issued by Huatong International Investment Holdings and guaranteed by Qingdao China Prosperity State-owned Capital Operation (Group).

Jiaozuo Investment Group raised $100mn via a 363-day note at a yield of 5.6%, 20bp inside initial guidance of 5.8% area. The bonds were unrated and proceeds will be used for general corporate purposes, including for project construction, debt repayment and working capital.

Details on Vedanta’s and Sunac’s new bonds are mentioned lower down.

A put option gives the buyer of the option the right but not the obligation to sell the underlying instrument at a particular price known as the strike price at expiration. Put options in bonds are in the hands of the bondholders unlike call options, which lie with the issuer. Exercising a put would require the issuer to redeem the bonds, leading to a cash outflow.

Yida China Holdings is asking holders of its $225mn 14% 2022s to remove a put option and waive an event of default, following an arbitration award against it. Since 2017, Dalian Yihong Property Development and Dalian Yize Property Development, two joint venture partners of Yida, have been trying to enforce a put option requiring Yida to buy their equity interests in the JVs. On October 20 2020, the Hong Kong International Arbitration Centre ruled in favor of the claimants and ordered Yida to pay a put option total price of $108.8mn, as well as accrued interest of $84.1mn and fees totaling $16.3mn. Yida said it is finalising an agreement with the claimants that would reduce the amount it needs to pay and extend the payment deadline.

“I think the rise in yields is probably a good sign so far because it does reflect better outlook for US economic growth and inflation expectations which are closer to the committee’s inflation target,” he said. “I gave a rosy outlook today but it’s only an outlook,” Bullard said. “The chair has wanted to start that conversation [on policy change] only when it’s appropriate and not get ahead of ourselves even though we do have high hopes the pandemic will come to an end.”

“Much of this increase likely reflects growing optimism in the strength of the recovery and could be viewed as an encouraging sign of increasing growth expectations,” George said.

“Yields have definitely moved at the longer end, but right now I am not worried about that. Just to remind you, our mandate is full employment,” Bostic said. “It’s not full GDP. It is not the size of GDP. So this disparity is something that is important and something we are going to have to continue to watch closely.”

“Indeed, with strong federal fiscal support and continued progress on vaccination, GDP growth this year could be the strongest we’ve seen in decades,” he said, though he added that underlying inflation is likely to remain “subdued for some time.”

“The economy is already recovering and a lot of people think that this stimulus proposed is much more than what’s needed,” said Carey. “You put too many coals on the fire and we build the fire to a very intense level. People start to think the Fed won’t be able to keep rates where they are.”

“Right now those rates are increasing at a pace that may be unsettling to strategies such as risk parity, and the fixed income volatility is spilling over into other assets,” said Samana. “Until the speed at which rates are rising slows, we may need to mentally prepare ourselves for more days like this.”

“We are in uncharted territory where we are likely to experience a global economic rebound with a global surge in inflation never experienced before,” said Doty. “No one knows how it will play out.”

“When the bond market wants to run, it’s going to run much faster than any central banker, and that again is on full display,” said Boockvar. “Also, be careful what you wish for. Don’t spend all your waking hours trying to artificially suppress interest rates and then root for higher inflation because when the market thinks that inflation will come, it will run you over.”

“The spike up in Treasury yields will have major implications across the world whether from bank refinancing to loans,” said Grant. Central Banks are “going to have to increase their balance sheets — if this blows out, it will change countries’ debt-to-GDPs, their currencies.”

“Selling begets more selling basically. In the short-term it doesn’t look like it’s stopping,” said Pearce. He said US 10-year yields may climb to 2% “before we see some decent two-way trading.”

“At a minimum, this pace of YCC needs to continue next week and I think the market’s looking for even more,” said Ong.

“It’s important that yields don’t suddenly jump up and down,” Aso said. “We need to make sure not to lose the market’s trust with fiscal management.” He added that “right now we’re not at a stage where we’d say whether the yield levels are appropriate or inappropriate.”

“With surging Treasury yields, issuance has been unsurprisingly subdued,” said Khan. “Issuers would rather wait for some calm.” The rally in oil prices left “regional sovereigns with shrinking deficit predictions and less pressure to raise capital,” Khan said. “Banks also have plenty of liquidity so have been more focused on raising quasi-equity capital.”

On the opinion that the bond market could be anticipating price rises that may never come – Dan Ivascyn, chief investment officer at Pimco

“There is a material risk for the bond market of an inflation head fake,” Ivascyn said. “This could be a powerful recovery and we have never gone from locking down an economy to opening it back up with this amount of stimulus.” “We still see powerful disinflationary trends. After an initial recovery [from the pandemic] there is likely a world of excess capacity,” he said. “The back-up in rates has been healthy,” Ivascyn said. “A further rise in real yields would hit risk assets like equities and see policy adjustments.” “I don’t believe yield curve control is around the corner [but] we may get the type of rhetoric that seeks to achieve that policy goal,” he said.

“We will purchase flexibly according to market conditions and with a view to preventing a tightening of financing conditions that is inconsistent with countering the downward impact of the pandemic on the projected path of inflation,” he said.

“A too-abrupt increase in real interest rates on the back of improving global growth prospects could jeopardise the economic recovery.”

“If you want to have a market economy, you have to have a market price. Prices below have many consequences, some predictable and others unpredictable, but all negative,” said Branco. “Previous attempts to escape the Petrobras parity rule proved disastrous. We lost $40bn,” he said. “Since then we have reduced our debt by almost $36bn but it is still a very indebted company and our debt is in dollars. How will you reconcile dollar-denominated obligations with local currency?”

Castello Branco said that working from home had for Petrobras “not only reduced the rate of virus contamination but has also reduced costs and increased productivity”. “And in the future, we will migrate to a hybrid regime that has been approved by the vast majority of our employees.” 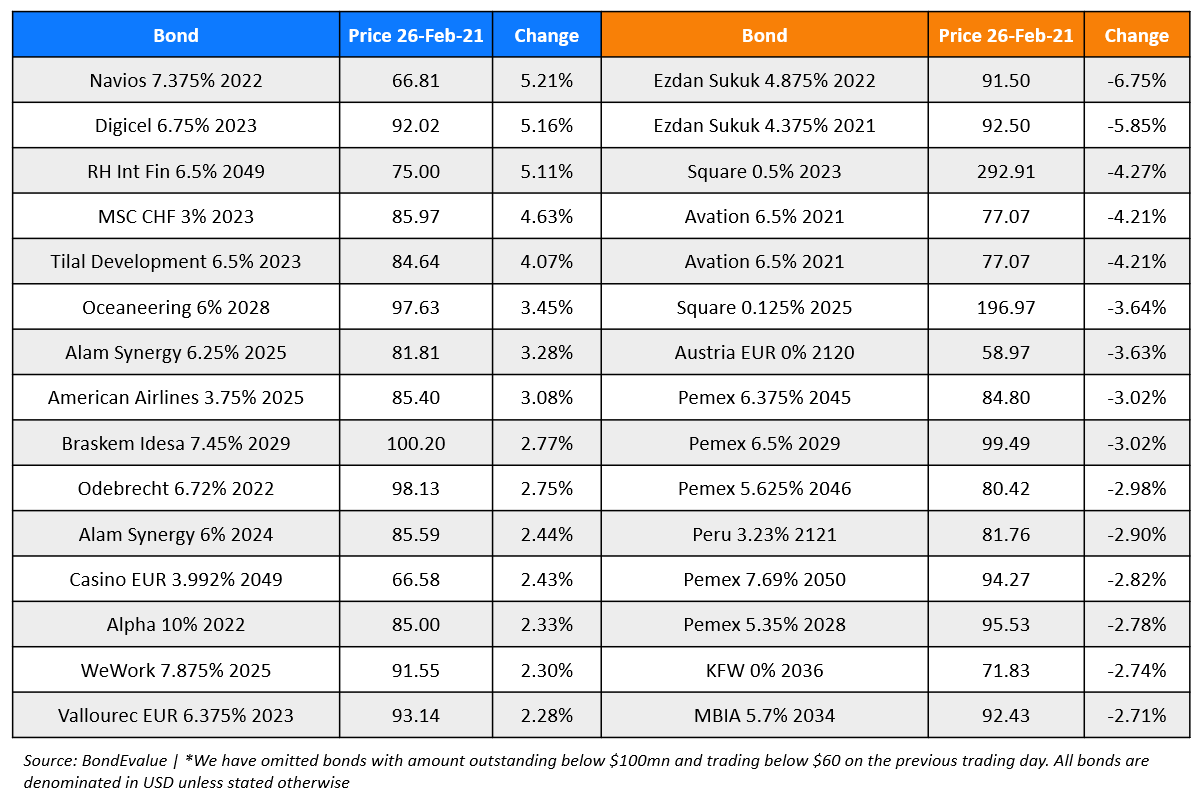