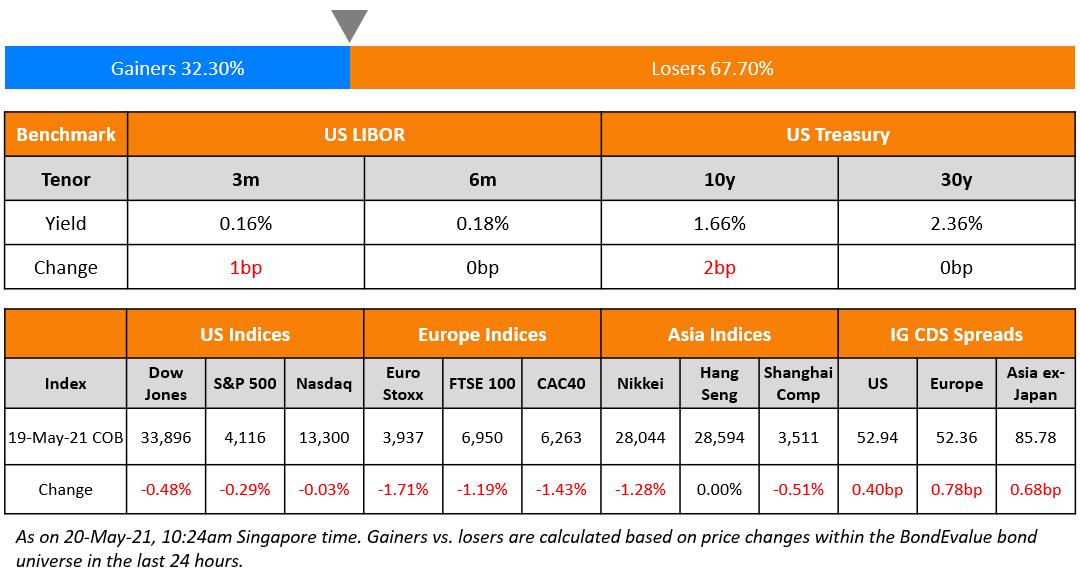 US markets continued to fall for the third straight day, with S&P ending lower by 0.3% and Nasdaq marginally lower by 0.03%. While the markets opened with a sell-off, they cut losses before close led by chip-stocks with AMD up 2.4%, TSMC and Qualcomm up 1.4%. The Fed in its policy meeting gave indications that members were ready to think about talking about tapering if growth continued to meet the goals of the committee. European equity indices closed lower – FTSE was down 1.2%, DAX was down 1.8% and CAC slipped 1.4%. US 10Y Treasury yields climbed slightly to close at 1.67%. Crude fell ~3% as stockpiles increased amid lower demand as Covid-19 cases rose. The US IG CDS spreads were 0.4bp wider and HY spreads were 2.2bp wider. EU main spreads were 0.8bp wider and crossover spreads widened 4.8bp. Asian equities have started lower 0.4% with Asia ex-Japan CDS spreads tightening 0.7bp.

Rajaram Kannan, CTO and Co-Founder of BondEvalue is joined by Industry experts from Northern Trust, Citi and Hyperledger to provide a first-time sneak peek into what went into launching the BondbloX Bond Exchange using DLT Technology. The webinar is complimentary and takes place today at 5pm SG/HK. Click on the banner below to register. 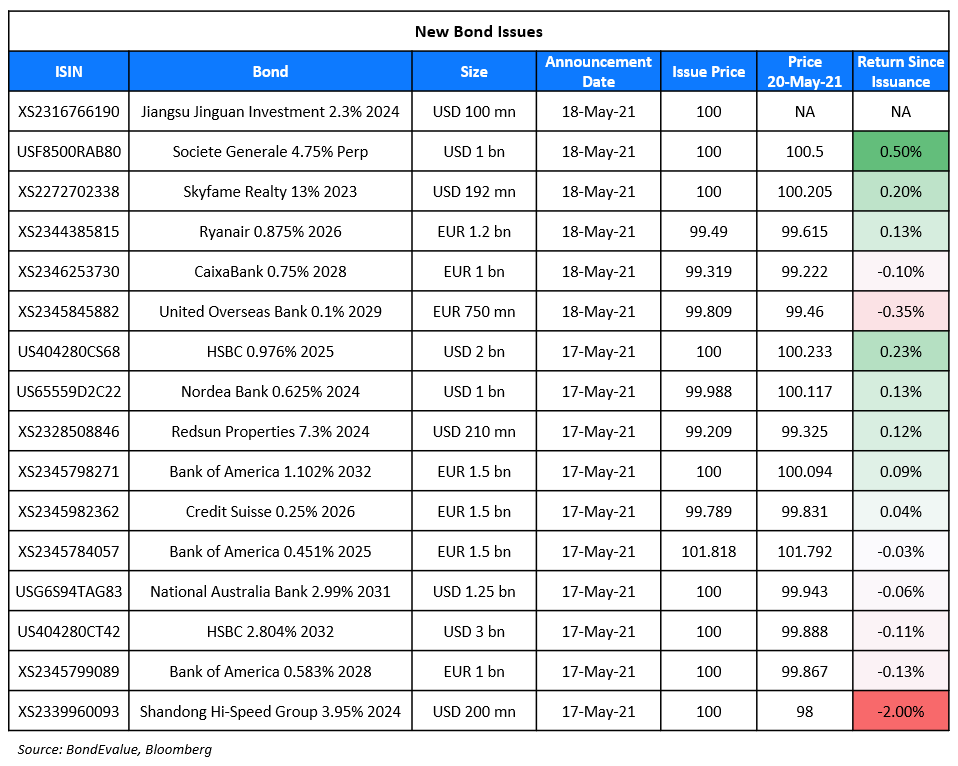 Skyfame Realty raised $112mn via a tap of their 13% 2023s at a yield to put of 13%. The bonds have expected ratings of B-. Proceeds will be used for offshore debt refinancing. Skyfame International Holdings is the issuer and the parent company is the guarantor.

Join us for a complimentary webinar on how to leverage the BondEvalue App to better track and manage your bond investments. The session will cover key features of the App such as setting up your bond portfolio, screening for bonds, tracking new bond issues, setting up alerts and more. Click on the image below to register.

Viability Ratings (VRs) are ratings assigned by Fitch to be internationally comparable and show their view of the intrinsic creditworthiness of an issuer. VRs are a key component of a bank’s Issuer Default Rating (IDR), as per Fitch. VRs are assigned primarily to banking companies with certain factors that could be indicative of a bank likelihood of failing or becoming non-viable. These factors include defaulting on senior obligations, entering a resolution regime/bankruptcy/administration receivership etc., triggering non-viability clauses embedded in the instrument, execution of a distressed debt exchange as defined by Fitch’s criteria and receiving extraordinary support such that a default or other event of non-viability is avoided. To learn more on VRs, click here.

On the Fed’s signal of possible taper talks in upcoming FOMC meetings
According to minutes from the April 27-28 Federal Open Market Committee meeting
“A number of participants suggested that if the economy continued to make rapid progress toward the committee’s goals, it might be appropriate at some point in upcoming meetings to begin discussing a plan for adjusting the pace of asset purchases.” “Various participants noted that it would likely be some time until the economy had made substantial further progress toward the committee’s maximum-employment and price-stability goals.” “Despite the expected short-run fluctuations in measured inflation, many participants commented that various measures of longer-term inflation expectations remained well anchored at levels broadly consistent with achieving the Committee’s longer-run goals.”
Michael Feroli, JPMorgan Chase & Co. chief US economist
“It was surprising in so far as Powell after the meeting, in the press conference, said it wasn’t time to talk about talking about tapering and they’re talking about talking about tapering.” “Even with the April payroll disappointment, which was obviously after the meeting, you could kind of start taking some baby steps in that conversation at the June FOMC meeting.”
On the Fed’s dovish commitment on tapering asset purchases and pressure to discuss changes soon – Kathy Jones, chief fixed-income strategist at Charles Schwab
“They don’t publish this stuff without knowing that this has an impact,” said Jones. “It is the first hint, but it will be a gradual process. All the language is conditional. They are leaving themselves a lot of flexibility.”
On the warning that pandemic debt burden creates financial stability risks
Luis de Guindos, vice-president of the ECB
“We are optimistic that financial and economic conditions will bounce back.” “There is, however, a reality that the pandemic will leave a legacy of higher debt and weaker balance sheets, which — if unaddressed — could prompt sharp market corrections and financial stress or lead to a prolonged period of weak economic recovery.” “It is very important for governments to lay out fiscal consolidation plans that are credible.”
According to the European Central Bank
“Vulnerabilities from the outstanding stock of debt appear higher than in the aftermath of the global financial crisis and the euro area sovereign debt crisis, although debt servicing and rollover risks appear more benign given continued favourable sovereign financing conditions in terms of both pricing and duration.”
On the need to end Mexico’s monetary easing cycle – Irene Espinosa, deputy governor of Mexico’s central bank
“We doubtless have to prepare ourselves for a global and local recovery process and that implies a change in the monetary policy vision.” “Inflation in Mexico has been and is above target, and that puts us in a very different situation for the management of monetary policy from the U.S.,” she said. “The growth we are seeing will be slow, long, and uncertain.” “This support to Pemex isn’t necessarily resolving Pemex’s structural problems to allow it to be sustainable in the medium term,” Espinosa said. “We haven’t seen a new business plan that lets you see where these new sources of financing are coming from.”

European bond yields “are moving based on higher inflation expectations and the reopening of the economy,” said Spinozzi.  “The only direction yields can go is higher.”
Lee Hardman, a strategist at MUFG
“Rising yields in the euro zone are providing more support for the euro and are an indication of rising optimism over outlook for European economies,” said Hardman. “The positive Covid developments provide more confidence that activity in the euro zone will begin to rebound more robustly.”
Christoph Rieger, head of fixed-rate strategy at Commerzbank
“Some Governing Council members should be stressing that the ECB will make sure to keep financing conditions favorable,” Rieger said. “This could then mean hints that purchases can run for longer and that the first rate hike the market is predicting in 2023 looks premature.”
Top Gainers & Losers – 20-May-21* 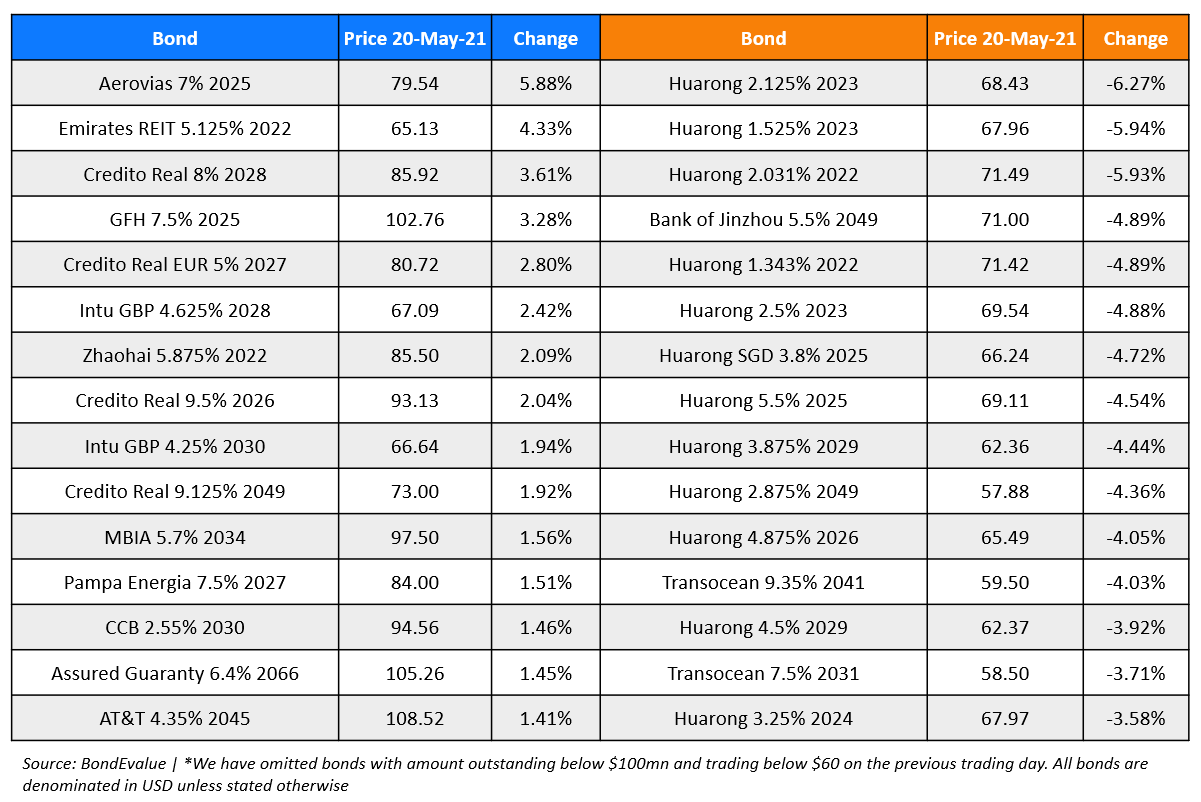