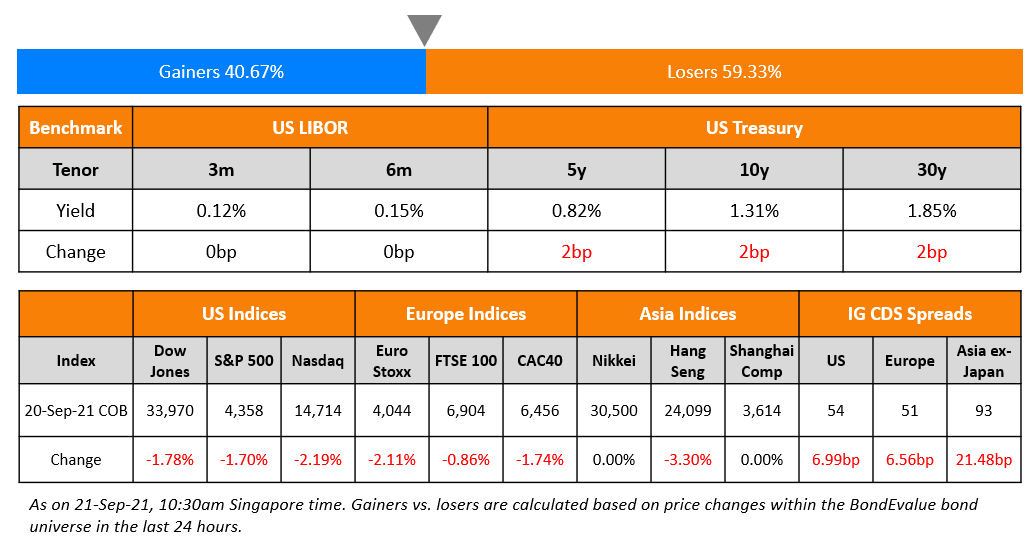 US markets witnessed a sharp sell-off making it the worst trading session since May. Market volatility remained high as investors watch for the impact of economic disruptions in China, particularly in the real estate space and the upcoming Fed Meeting – the tech heavy Nasdaq fell 2.2% while S&P dropped 1.7%. Sectors across were deep in the red led by Energy tanking 3% followed by Consumer Discretionary and Financials losing more than 2.2%. European stocks had a similar story – DAX fell another 2.3%, CAC 1.7% and FTSE 0.9% with banks falling as much as 4.1%. Brazil’s Bovespa plunged another 2.3% adding to the 2.1% loss witnessed on Friday. In the Middle East, UAE’s ADX and Saudi TASI lost 0.8% and 0.6% respectively. Shanghai remains closed for the mid-autumn festival holiday while most of the other Asian equity indices followed the West – HSI has added another 1% to yesterday’s losses of ~3% in early trading and Nikkei was down 2% while Singapore’s STI was slightly up 0.1%. Hong Kong’s CPI YoY for Aug came softer at 1.6% vs. 3.7% last year expectations of 1.8%. US 10Y Treasury yields widened 2bp to 1.31%.
The credit risk sentiment impact was seen across CDS (Term of the Day, explained below) markets – US IG and HY CDX spreads widened 7bp and 8bp respectively. EU Main CDS spreads were 6.6bp wider and Crossover CDS spreads widened 25.8bp. Asia ex-Japan CDS spreads widened a massive 21.5bp (chart below) as contagion fears in China’s real estate sector grow as Evergrande stares at a possible default. 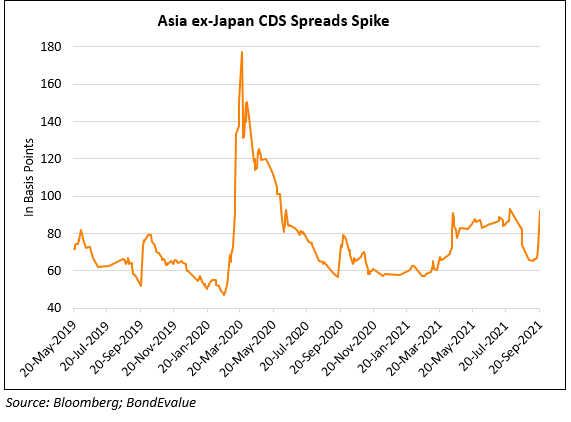 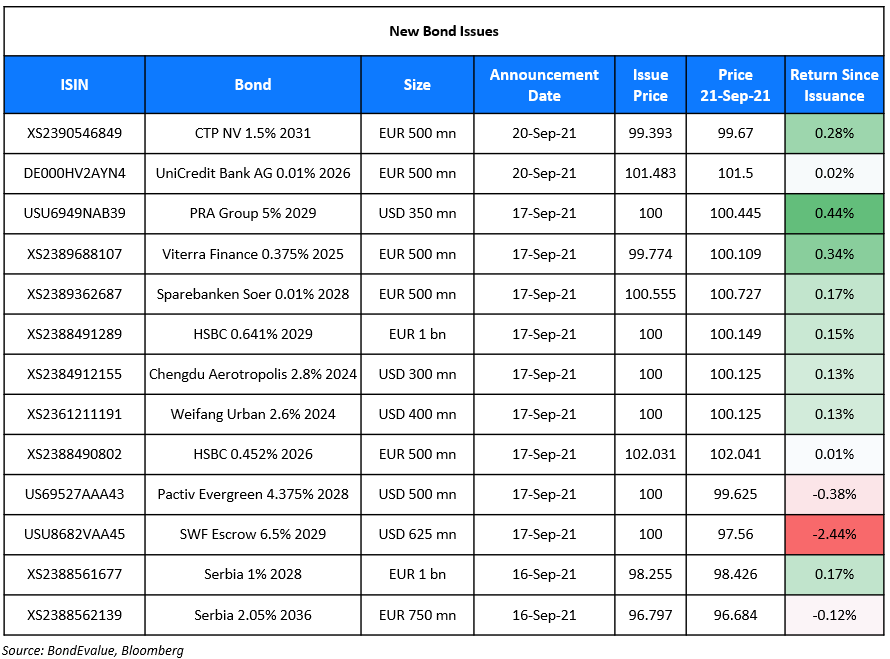 CK Asset raised S$300mn ($222.8mn) via a fixed-for-life Perpetual non-call 3Y (PerpNC3) bond at a yield of 3.38%, 24.5bp inside initial guidance of 3.625% area. The bonds have expected ratings of A2 (Moody’s) and are issued by Panther Ventures, while CK Asset, formerly known as Cheung Kong Property Holdings, will be the guarantor. Private banks will receive a 20-cent rebate. The bonds have no coupon reset or step-up while the coupon is deferrable on a cumulative and compounding basis. Proceeds will be used for general corporate requirements. The deal is only the second fixed-for-life SGD-denominated Perp in after Mapletree Investments’ S$600mn ($443mn) PerpNC3 in August that priced at a yield of 3.7%. The bonds were priced 24bp wider to Mapletree’s 3.7% fixed-for-life Perp (unrated) that currently yield 3.14%.  Proceeds will be used for general corporate requirements.

Zhongliang Holdings raised $200mn via a 1 year 7 month green bond at a yield of 12%. The bonds are rated B+ (Fitch). Proceeds will be used for debt refinancing and in accordance with the company’s sustainable finance framework.

“The price action across several asset classes in Asia today is horrendous due to rising fears over Evergrande and a few other issues, but it could be an overreaction due to all of the market closures”

“The repercussions from Evergrande’s prospective collapse will likely contribute to China’s ongoing economic deceleration, which in turn anchors global growth and inflation, and casts a pall over commodity prices”

“This is a paradigm shift…People need to keep a close look.”

“They’re not going to react to small market moves and defer the tapering on that basis. They have to change their economic forecast. At this point it’s really premature to reach that conclusion. If inflation expectations truly become unanchored that’s a problem for actual inflation and I would think they’d have to react. On the other hand, if more officials project a rate increase next year “that may reduce the concerns about the Fed being late”

“The situation currently in the new issuance market makes it difficult to get paper for a reasonable premium. You’re trying to set spread limits and effectively end up sitting in cash.” 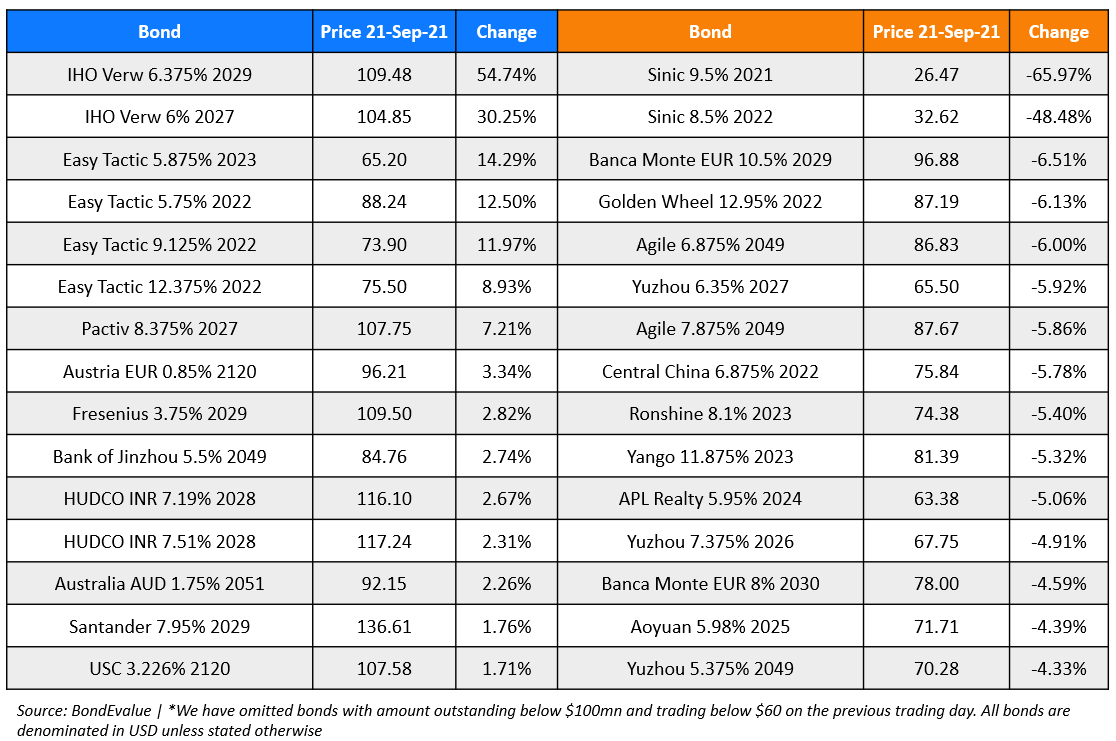