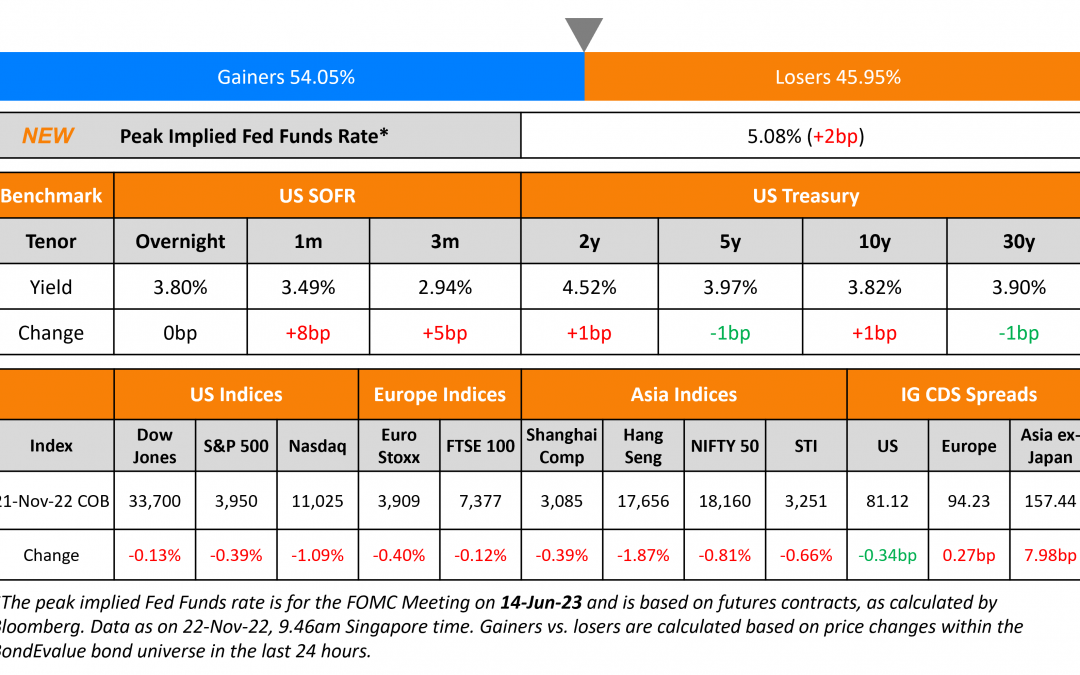 US Treasury yields were little changed across the curve yesterday. The peak Fed Funds rate was up 2bp to 5.08% for the June 2023 meeting. Federal Reserve’s Loretta Mester said that she does not have a problem with slowing down rate hikes from 75bp to 50bp in December. Meanwhile, another Fed governor Mary Daly said that she believes the impact of Fed hikes are likely bigger than what target rate implies, noting that financial markets are acting like the fed rate is ~6%. Probabilities of a 50bp hike at the FOMC’s December meeting currently stands at 76%. US IG CDS spreads tightened 0.3bp and HY spreads saw a 0.6bp tightening. US equity markets ended lower with the S&P and Nasdaq down 0.4% and 1.1%.

ArcelorMittal raised $2.2bn via a two-tranche deal. It raised:

The senior unsecured bonds have expected ratings of Baa3/BBB-. Proceeds will be used for general corporate purposes and to repay commitments under the $2.2bn bridge term facility agreement related to the financing of the intended acquisition of Companhia Siderúrgica do Pecém.

Credit Agricole raised €2.25bn via a two-tranche deal. It raised

The senior preferred bonds have expected ratings of Aa3/A+/AA-.

ASB Bank raised $650mn via a 5Y bond at a yield of 5.398%, 20bp inside initial guidance of T+160bp area. Proceeds from the unrated senior unsecured bonds will be used for general corporate purposes.

Jinan Rail Transit Group raised $200mn via a 1Y green bond at a yield of 6.75%, 45bp inside initial guidance of 7.2% area. The senior unsecured bonds are rated A- by Fitch.

Jinan Industry Development last week raised $114mn via a 364-day bond at a yield of 7.5%, where Bank of Qingdao Jinan branch was providing a standby letter of credit.

“The easing in risk sentiment has opened up a window of opportunity for outperformance in selected emerging-market assets, particularly those that sold off by more than fundamentals would warrant”

“There are very attractive yields, especially if one can look through short-term volatility periods that we think will still happen from time to time”

“I think we can slow down from the 75 at the next meeting. I don’t have a problem with that, I do think that’s very appropriate. But I do think we’re going to have to let the economy tell us going forward what pace we have to be at… Right now my forecast is that we’re going to see some real, good progress on inflation next year. We won’t be back to 2%, but we’ll see some meaningful progress next year”