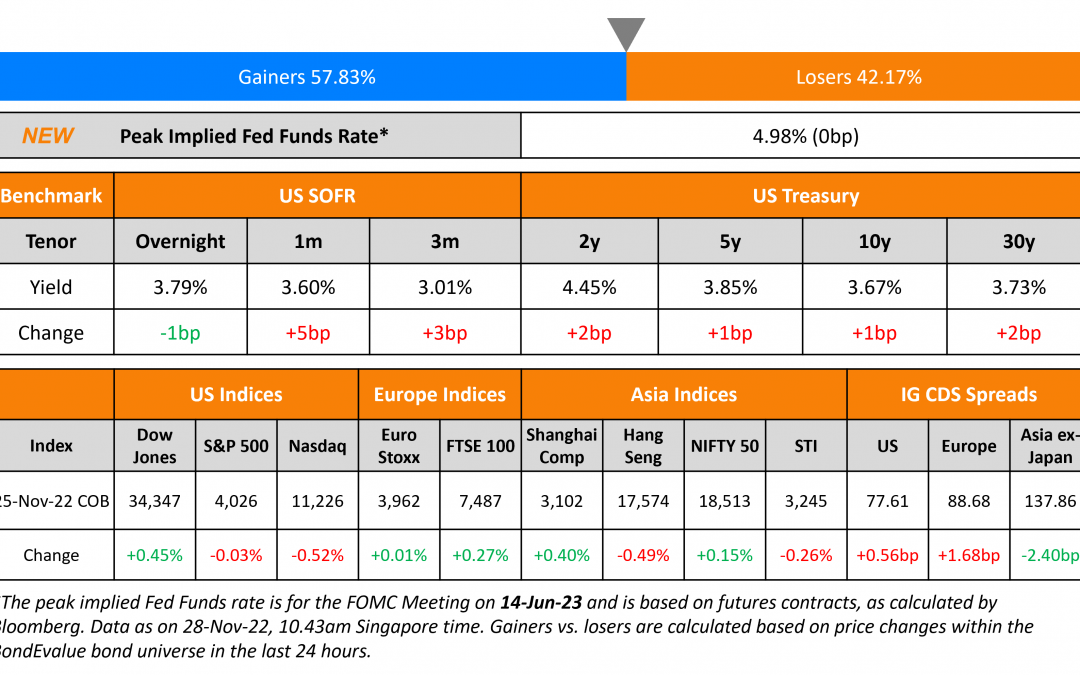 US Treasury yields were marginally higher by 1-2bp across the curve. The peak Fed Funds rate stayed flat at 4.98% for the June 2023 meeting with a shortened trading week seeing low market activity. The probabilities of a 50bp hike at the FOMC’s December meeting currently stands at 75%. US IG CDS spreads widened 0.6bp and HY spreads saw a 4.3bp widening. FT notes that investors have invested ~$16bn in US corporate bond funds in November with IG funds receiving $8.6bn in new client money and HY seeing $7.1bn in net inflows, as per EPFR data. Thus, November inflows would be highest since July 2020 that topped $20bn. In the US equity markets, S&P was flat while Nasdaq closed 0.5% lower.

China Reform Holdings Corporation/Guojing Capital raised $550mn via a 3Y bond at a yield of 6.3%, 40bp inside initial guidance of 6.7% area. Proceeds from the senior unsecured bonds will be used to repay offshore debts and refuel its working capital.

Scheme of Arrangement (SoA) is a legal mechanism used by a company in financial difficulty to reach a binding agreement with its creditors to pay back all, or part, of its debts over an agreed timeline. Typically, the company draws up scheme proposals for its creditors and sends it to them with notice of a creditors meeting. During the meeting, the company explains the proposals and creditors decide to vote in favour of scheme. The scheme is then approved by a High Court post which debts are written down as per the SoA. SoAs go through a court approval making it different from consent solicitations.

“They are less hawkish than they were, which is still a lot more hawkish than the market wants them to be… The market moves far quicker than the Fed will. Every time the market fails to believe them, it eases financial conditions, making the Fed’s bias toward higher rates more embedded.”

“Sentiment from the more dovish Fed minutes is carrying over. Any indicators of softening growth are all playing into the softer inflation narrative, which is another support for the Fed arriving toward the end of its cycle relatively soon.”

On Emerging-Market Bond Laggard Asia Primed for Rebound in 2023

“For emerging-market Asia bonds in general, I think it will be a brighter six-to-12 months ahead into 2023 following two tumultuous years”

Inflation is coming under control in Indonesia and South Korea, “which is our top two local-currency debt calls in EM Asia

“Indonesia is attractive thanks to its higher yield, and in a more risk-positive environment, Indonesia’s bonds should benefit from increased portfolio flows”

On Investors pumping almost $16bn in to US corporate bond funds

“I think the investors are saying . . . ‘rates are going down rather than up, so I want to be in sooner rather than later”