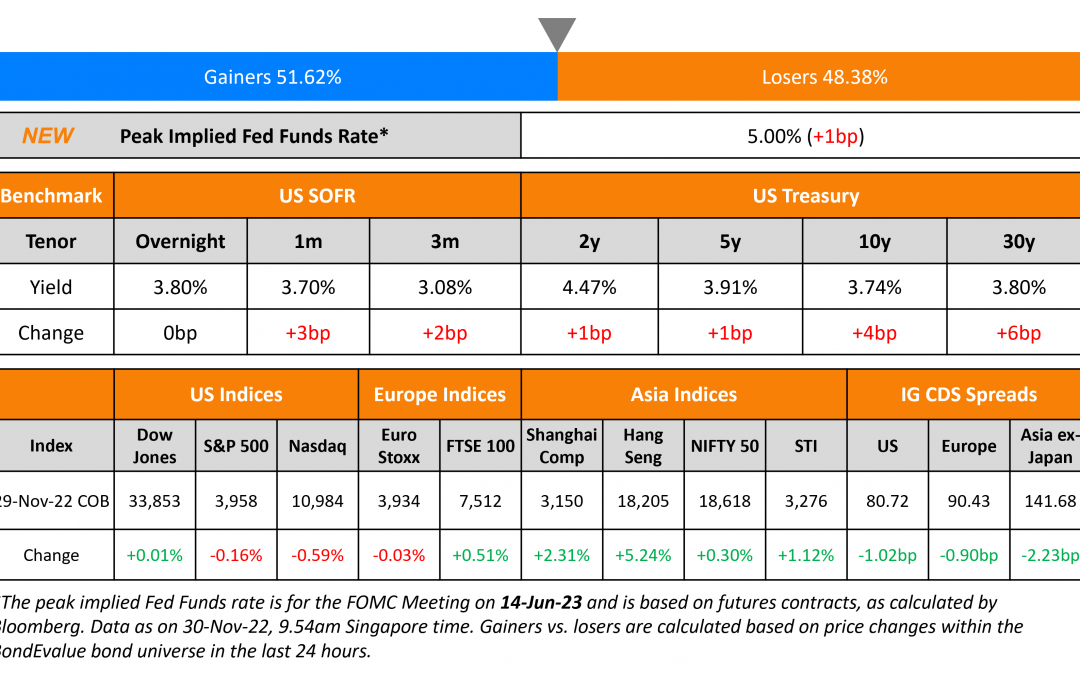 US Treasuries sold off on Tuesday led by the long-end, with 10Y and 30Y yields up 4/6bp to 3.74% and 3.80% respectively. The peak Fed Funds rate also moved 1bp higher to 5.00% for the June 2023 meeting. The probability of a 50bp hike at the FOMC’s December meeting currently stands at 68%, down from 76% a week ago amid hawkish comments by Fed officials this week. All eyes are now on Fed chair Jerome Powell’s speech later today on the future path of interest rates. US IG and HY CDS spreads tightened 1bp and 4.3bp. US equity markets ended with a negative bias led by Nasdaq down 0.6% and S&P down 0.2%. US consumer confidence in November fell to a four-month low of 100.2, down from October’s revised print of 102.2 as persistent inflation and rising rates weigh on sentiment. 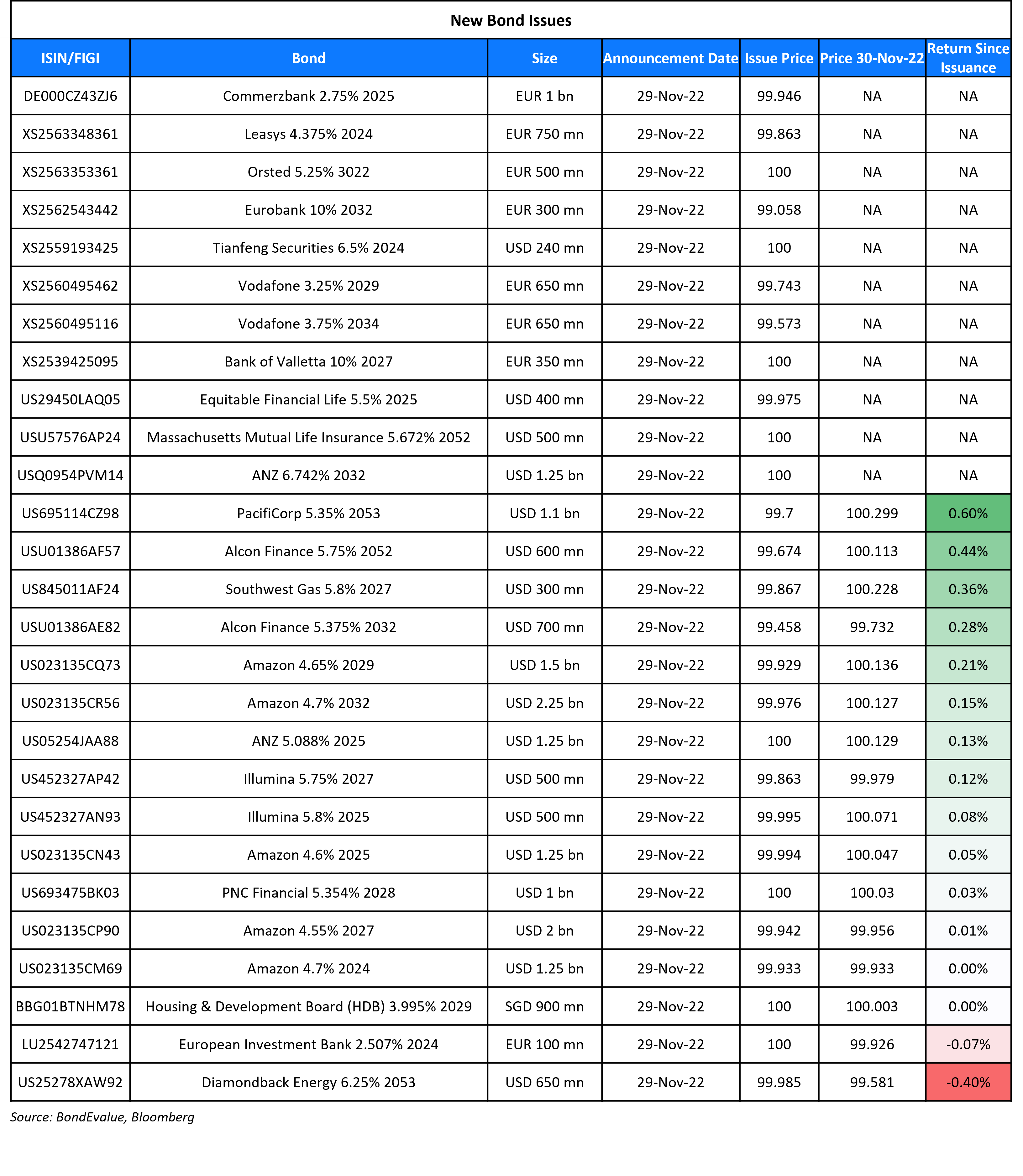 Amazon raised $8.25bn via a five-tranche deal. It raised

The senior unsecured bonds have expected ratings of A1/AA/AA-. The retail giant paid up for the new deal with new issue premiums across all tranches:

The senior unsecured bonds have expected ratings of Baa2/BBB/BBB.

Singapore’s HDB raised S$900mn via a 7Y bond at a yield of 3.995%. The senior unsecured bonds have expected ratings of AAA. Proceeds will be used to finance development programs and working capital requirements. The new bonds priced at a new issue premium of 15.5bp vs. its existing 3.08% 2030s that yield 3.84%.

SLB trigger refers to an event wherein an issuer fails to meet a pre-defined KPI on its sustainability-linked bonds (SLB), which leads to a penalty on its bonds. The most commonly seen penalty is a coupon-step up.

The ESG bond markets witnessed the first-ever SLB trigger on Poland-based PKN Orlen’s local-currency SLBs, which had KPIs linked to the issuer’s ESG rating. The company’s ESG rating was recently cut by MSCI from A to BBB, which led to a trigger on its SLBs leading to a coupon step-up.

On the recent rally in bond markets

“We are starting to see a number of economic indicators that point to the fact that inflation has peaked or is peaking…While trading in US Treasuries is likely to be volatile amid economic data and Fed rhetoric, the bond market rally ‘has legs.'”

“This hiking cycle is going to extend for longer than people anticipate…The market was a bit over-hedged so it didn’t really take much in terms of relatively good news in order to get this snapback rally. I would not expect this to persist.”

On the record outflows seen in the LQD ETF – Peter Chatwell, head of global macro strategies trading at Mizuho International

“We are in an ongoing base money-destruction mode from the central bank tightening, so outflows should be the central tendencies for all asset classes on aggregate…Clearly at this time of year, some money gets taken out of the market, particularly if performance has recently been strong, which with LQD it has.”

“The potential for rates to stay at current levels or go higher is probably deterring issuers from coming to the market…hat is likely to remain an issue until we reach peak hawkishness.”

“If the world continues like this for another 18 months of high stress and high yields, we may see bankruptcies among companies that aren’t able to roll over their debt.”

“The hope is that we’ll start to see more issuance activity next year, first from sovereigns and quasi-sovereigns, and then corporates…Once the market tests a few names, investors may get more confident about testing BB+ and BB credits.” 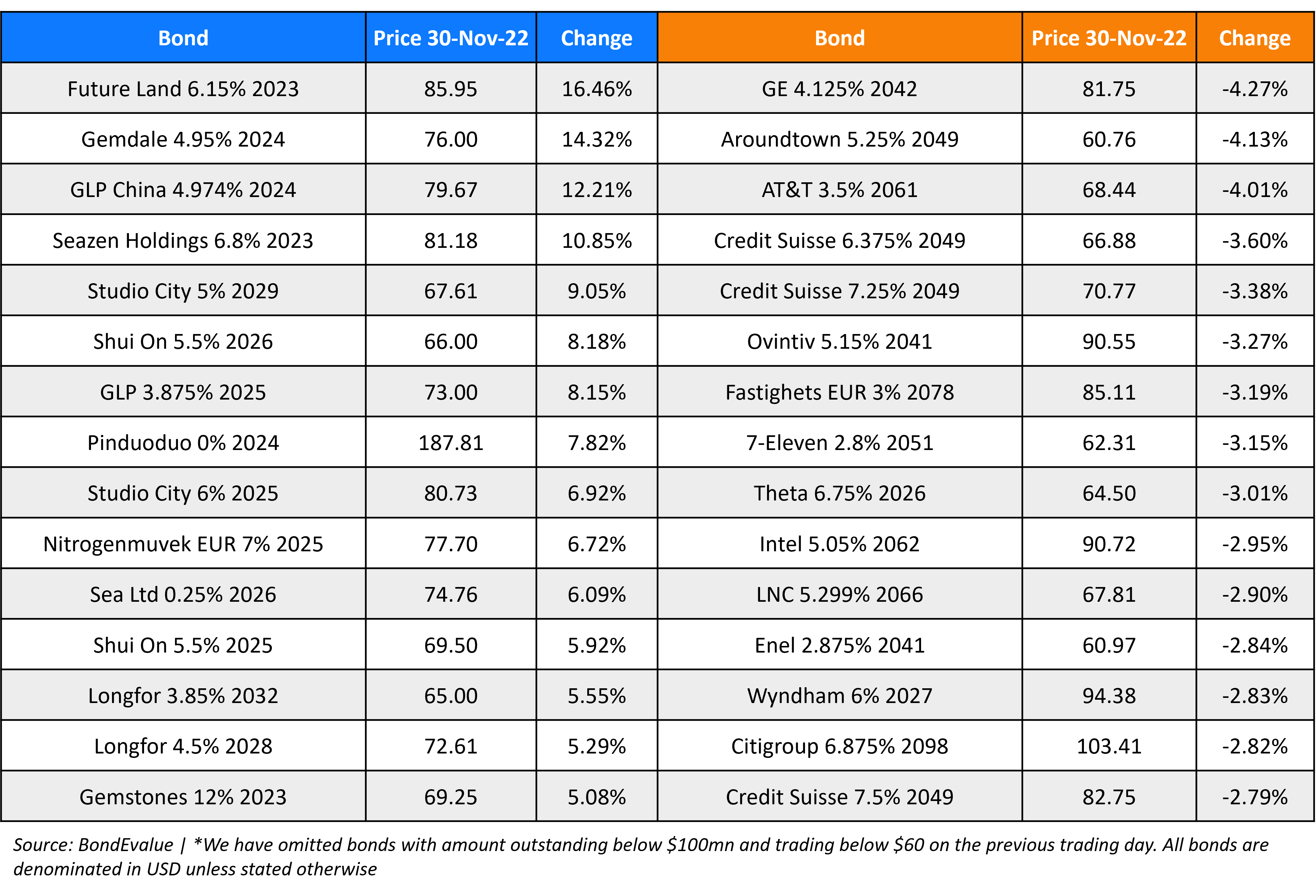