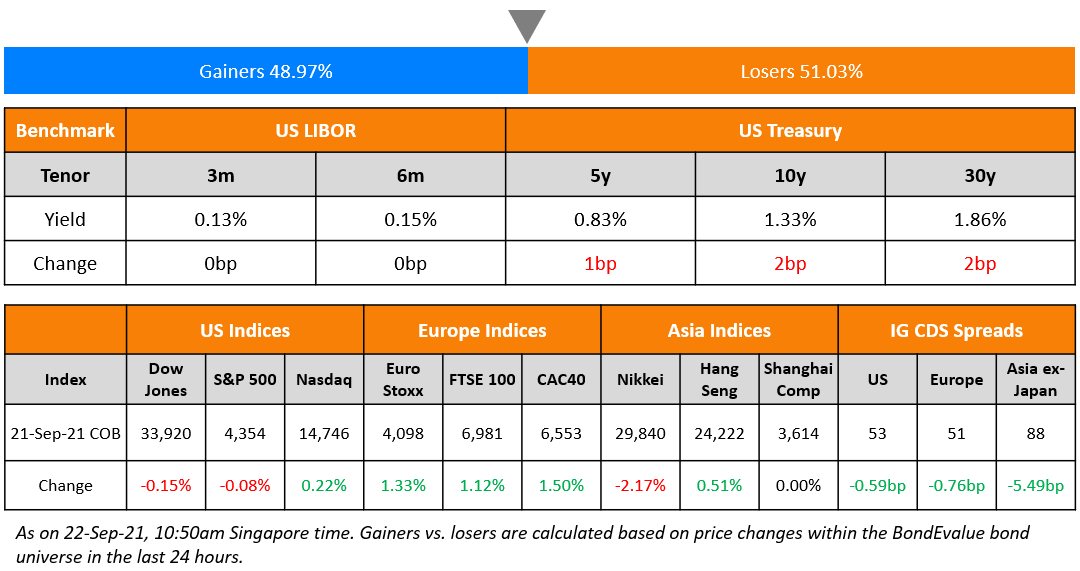 US markets had a mixed day after they shed initial gains – Nasdaq gained 0.2% while S&P closed 0.1% lower. Energy recovered by 0.4% followed by Healthcare, Consumer Discretionary and IT which were up marginally. Industrials down 0.7%, led the losers followed by Communication Services and Utilities which were down ~0.3%. European stocks bounced back – CAC, DAX and FTSE closed 1.5%, 1.4% and 1.1% higher. Brazil’s Bovespa recovered 1.3% after it lost more than 4% in the previous two trading sessions. In the Middle East, UAE’s ADX gained 0.1% while Saudi TASI slid 0.1%. Asia Pacific markets have started cautiously as Shanghai returns after a four day long weekend – Nikkei and Singapore’s STI were down 0.9% and 0.3% respectively, HSI was up 0.5% and Shanghai was broadly flat in early trade. US 10Y Treasury yields rose 2bp to 1.33%. US IG and HY CDX spreads tightened 0.6bp and 1.5bp respectively. EU Main CDS spreads were 0.8bp tighter and Crossover CDS spreads tightened 5.1bp. Asia ex-Japan CDS spreads tightened 5.5bp after yesterday’s sharp widening of over 20bp. 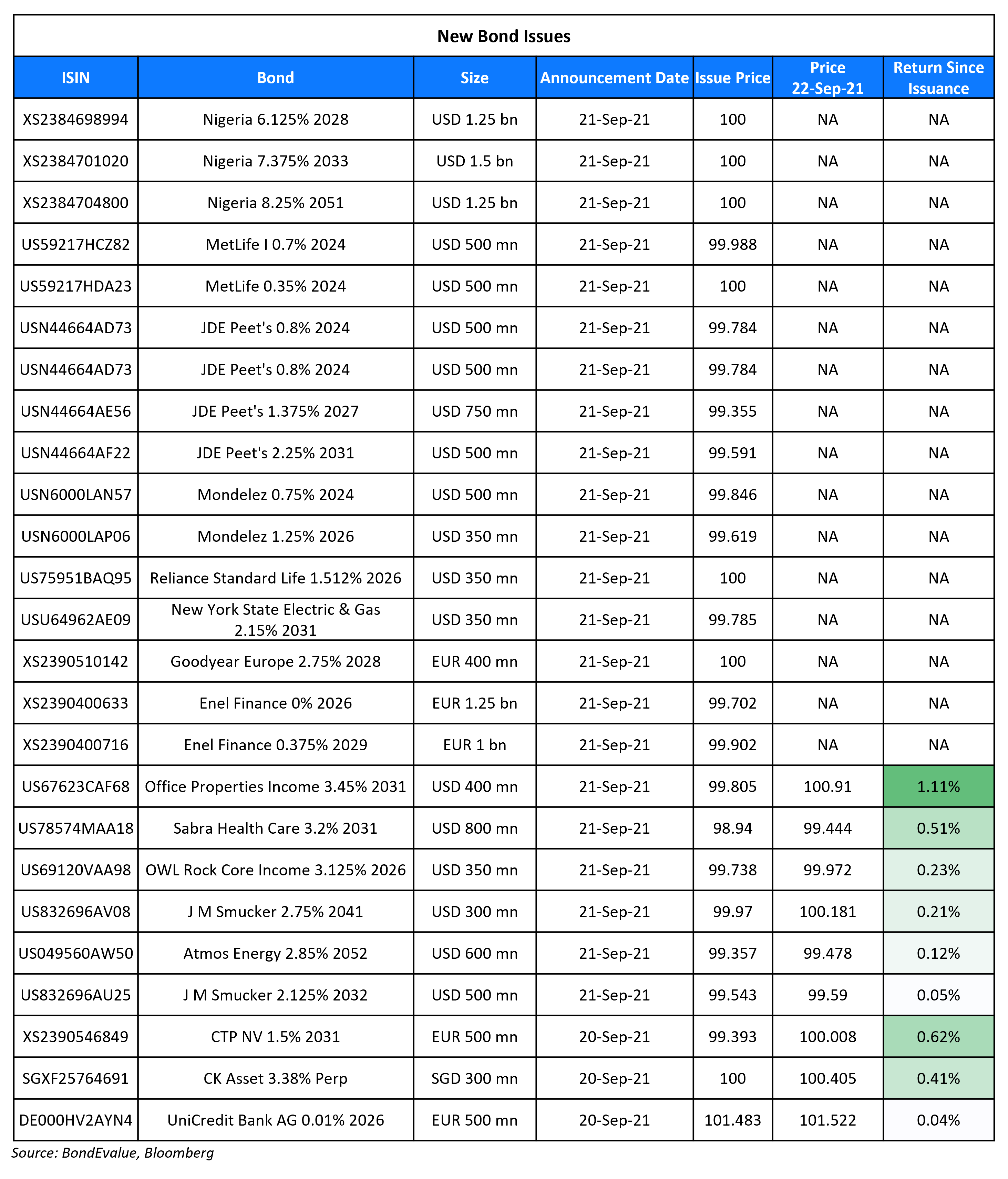 Nigeria raised $4bn via a three-tranche deal. It raised:

The bonds have expected ratings of B2/B-/B. Proceeds will be used for partial funding of its 2021 fiscal deficit. This is Nigeria’s first dollar-bond sale since 2018.

Singa Bonds are a new type of SGS Infrastructure Bond issued by the Singapore central bank, the Monetary Authority of Singapore (MAS) where proceeds will be specifically used for funding infrastructure projects. The specific use of proceeds differentiates the Singa bond from the regular SGS bonds. The issuance will mark the first of a series of infrastructure bonds from the central bank to fund Singapore’s long-term development of public projects. The bonds will be rated AAA and will have a minimum denomination of S$1,000 available to both retail and institutional investors. The sovereign plans to raise S$2.6bn from the issuance, which is expected to launch on September 28.

On the warning of a global debt trap – Nouriel Roubini, chairman and chief executive officer of Roubini Macro Associates

“My concern is that we are in a debt trap.” “When central banks are going to want to essentially phase out unconventional monetary policy, given the debt ratios, there is the risk of a crash in the bond market, in the credit market, in the stock market, in the economy and therefore they’ll be in that debt trap and unable to normalize policy rates.” “We are in a debt super cycle,” he said. “And eventually, central banks are in a trap. People said they are going to normalize policy rates, but with these levels of private and public debt, if they were trying to do that, there will be a market crash, an economic crash, and therefore, I think the path of least resistance is going to be to wipe out the real value of nominal debt at fixed-interest rates with higher inflation.”

On the opaque climate standards amid green property debt frenzy

“The use of proceeds from green bonds in the real estate sector focuses on energy efficiency — heating and cooling of buildings — and not so much on environmentally harmful factors from building materials such as cement.” “New issuance from the sector is a lot higher than from other parts of the market, which increases the risk of greenwashing.” “The bias toward real estate in green bonds makes diversification more difficult.”

“The commitment to third-party assurance is absolutely critical to make sure companies avoid the charge of greenwash.” “It’s so important that for green bonds there is a verified outcome.”

“We need a system to measure these buildings using the same specs as would be expected of a public company,” Pau said. “Unfortunately, many use of funds are going toward controversial projects that are potentially creating more environmental problems.”

“We are following the developments in China very closely,” Gopinath said. “We still believe that China has the tools and the policy space to prevent this turning into a systemic crisis.”

“Our indirect exposure through counterparty credit risk is small and with no single significant concentration.”

In a report by CreditSights analysts led by Jesse Rosenthal

“China’s government has a vested interest in preventing a disorderly default, which could wreak havoc on its property and banking sectors: both fundamental pillars to economic stability.” 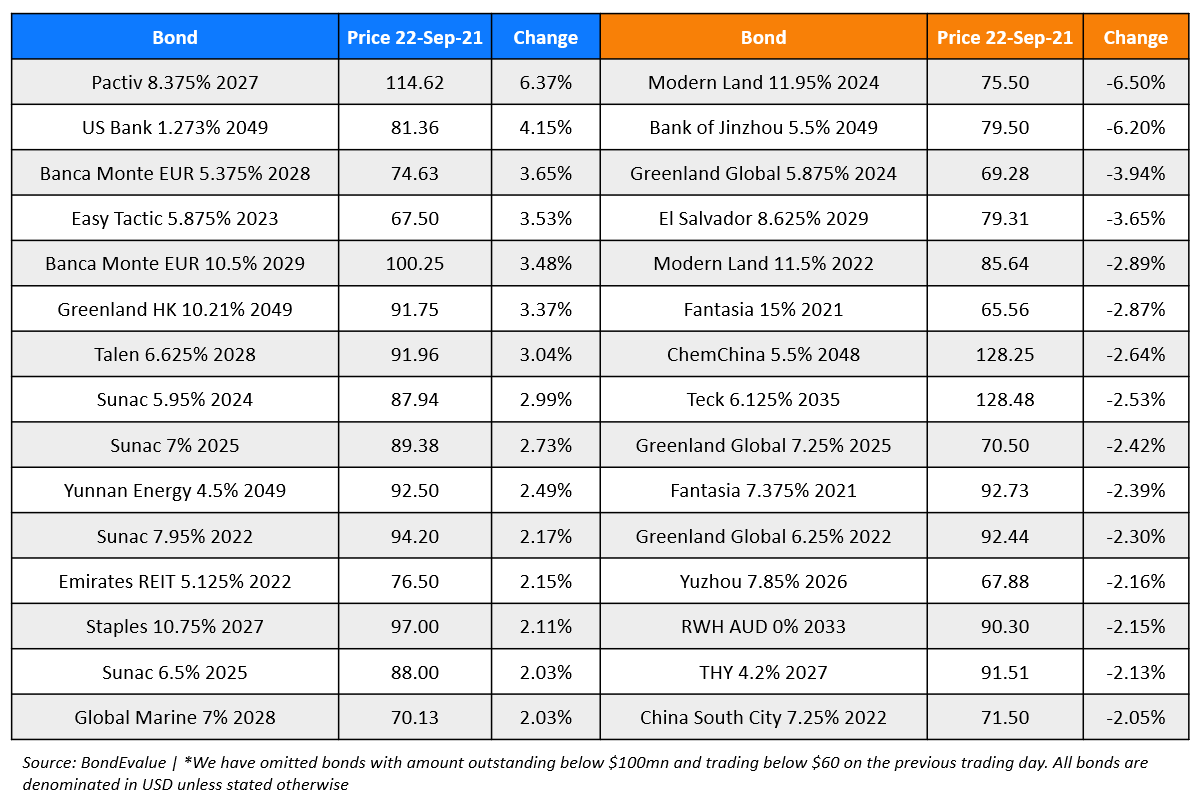