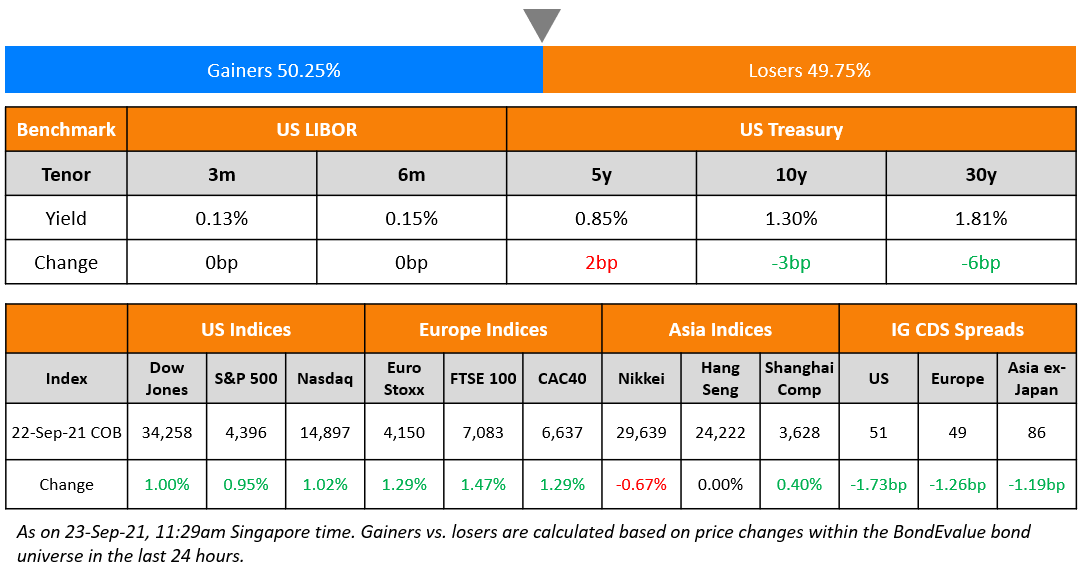 Wall Street ended higher as both the Nasdaq and S&P closed ~1% higher despite a slightly hawkish Federal Reserve meeting with more details on tapering and half of the FOMC expecting a rate hike next year (scroll down for details). Most sectors rallied led by Energy, up 3.2% followed by Financials, IT and Consumer Discretionary, up 1.3-1.6%. European stocks also saw a solid rise – DAX, CAC and FTSE ended 1%, 1.3% and 1.5% higher. Brazil’s Bovespa gained 1.8%. In the Middle East, UAE’s ADX gained 0.4% while Saudi TASI slid 0.4%. Asia Pacific markets have started positively – Shanghai is up 0.6%, HSI is up 0.7% and Singapore’s STI is up 0.9% while Nikkei is down 0.7% respectively and. US 10Y Treasury yields fell 3bp to 1.30%. US IG and HY CDX spreads tightened 1.7bp and 7.7bp respectively. EU Main CDS spreads were 1.3bp tighter and Crossover CDS spreads tightened 5.9bp. Asia ex-Japan CDS spreads tightened 1.2bp.
Eurozone consumer confidence came at -4, better than expectations of -5.8. Weekly US Crude inventories saw a drawdown of 3.48mn, a seventh straight weekly decline with crude oil price rallying ~2%. The SEC’s Rule 15c2-11 is a rule that governs the publication or submission of quotations by broker-dealers in a quotation medium other than a national securities exchange. Broker-dealers must review key, basic information about the issuer of the security before initiating or resume quotations.  Market participants have typically largely considered it as an attempt to protect retail investors from predatory schemes and fraudulent activity in penny stocks, but has not explicitly excluded bonds from the list. Market participants fear that since there are corporate issuers that are not listed on stock markets and thereby do not regularly produce regular earnings reports, the market for price quotes on these companies’ bonds by broker-dealers may stall.

On taper likely to be done by ‘middle of next year’
Jerome Powell, Federal Reserve Chairman
“Participants generally viewed that so long as the economic recovery remains on track, a gradual tapering process that concludes around the middle of next year is likely to be appropriate.” “The test of substantial further progress for employment is all but met.” On the effect of Evergrande on the US economy, “it’s something they’re managing,” Powell said. “In terms of the implications for us, there’s not a lot of direct U.S. exposure.”
In a statement by the Federal Open Market Committee (FOMC)
“If progress continues broadly as expected, the Committee judges that a moderation in the pace of asset purchases may soon be warranted.”
On the Fed’s hawkish tilt in latest policy projection – Sam Stovall, chief investment strategist for CFRA Research
The Fed’s projections are “probably a little bit more hawkish than many would have anticipated, basically acknowledging that should the economy continue to grow as we have seen, it would warrant a tapering to occur.” “You could say it’s a tentative tapering announcement even though they did lower their 2021 GDP forecast.”
On Evergrande’s debt crisis a worry for financial markets – Noel Quinn, HSBC Holdings Plc Chief Executive Officer
“I’d be naive to think that the turmoil in the market doesn’t have the potential to have second-order and third-order impact. Clearly with the changes that are taking place in the Evergrande situation it’s concerning.” “There is a potential for second and third-order impact, particularly on the capital markets and the bond markets, and we’ve got to stay close to that.” “I don’t think the regulatory reform that we see necessarily is wholly unexpected because there have been some strong signals, particularly around shadow banking, around the commercial real estate market, that some of the regulatory regime was going to change.”
On Evergrande’s exchange filing on its upcoming interest payment
Li Kai, founding partner of bond fund Shengao Investment
“Usually it will involve extension, payment in installment or a reduction in the coupon,” Li said. “This is one of the ways to avoid defaults by distressed companies.”
Daniel Fan, a credit analyst at Bloomberg Intelligence
“Evergrande might have arrived at some kind of standstill with onshore holders.” “They might have asked them not to act, pending for negotiation for a rescheduling or something of that sort.”
On evaluating green bonds issued by sovereigns
Victor van Hoorn, executive director of Eurosif
“That is an issue of credibility of the system at a time when Europe is trying to be the first jurisdiction to have some sound, robust sustainable finance rules in place.”
Alexander Lehmann, former lead economist for the European Bank for Reconstruction and development
“A sovereign exposure is not carbon neutral, and some less so than others,” Lehmann said.
On the era of Gulf jumbo bonds likely to be over – Hani Deaibes, head of debt capital markets for the Middle East and North Africa at JPMorgan
“Governments are trying to spread issuance through the year, trying to optimize pricing. They are now well established and have that flexibility.” “With lower financing needs, you don’t have to de-risk funding via large transactions and as such less need to do jumbo trades”. “Saudi Arabia has been gradually reducing its funding requirements, Abu Dhabi is in a very good position, Qatar has done the bulk of its large capex”, said Deaibes. “Maybe Kuwait is the only one that – when they eventually get approval to raise debt – may decide to do a jumbo transaction since they haven’t accessed the market since their inaugural transaction”. “We’re now in the period of refinancing of those large deals that came out in 2016, 2017, so issuance volume should be sustained by refinancing and issuances from new entities as the market continues to evolve and irrespective of a reduction in fiscal deficits, at least for the coming few years”, Deaibes said. 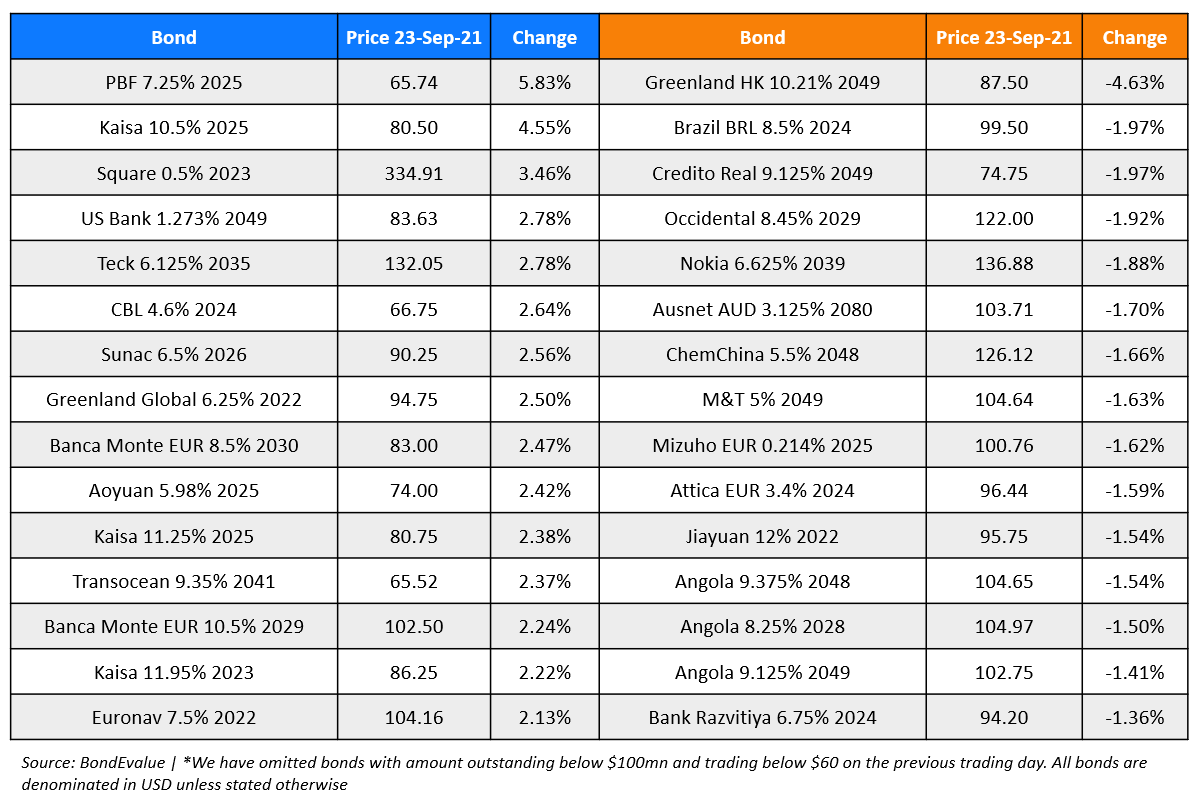