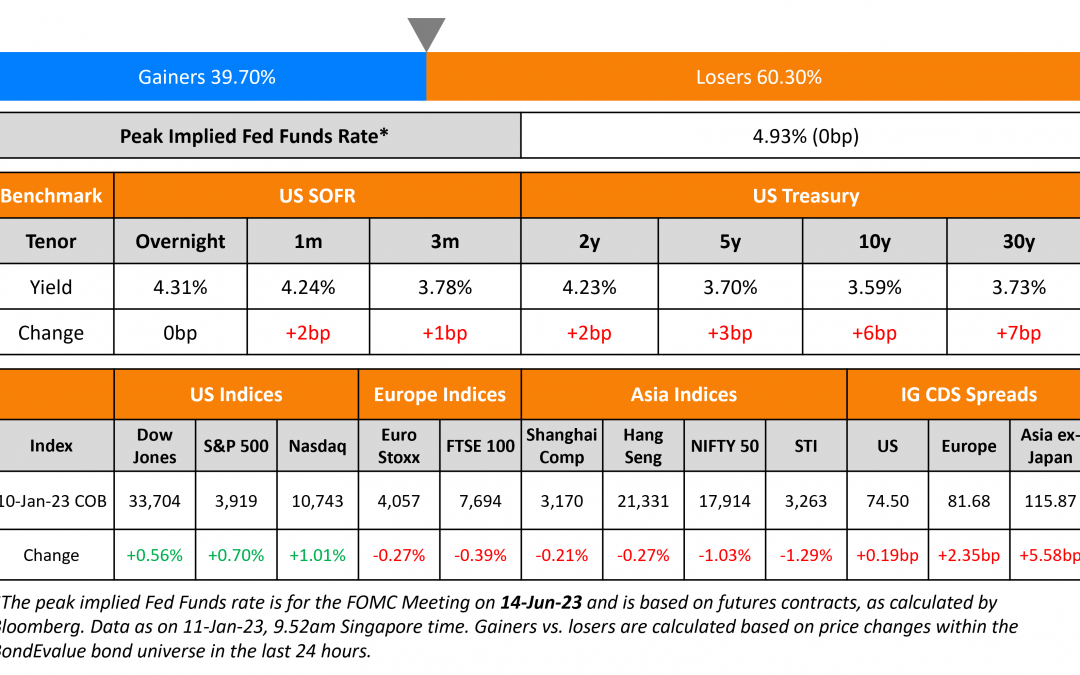 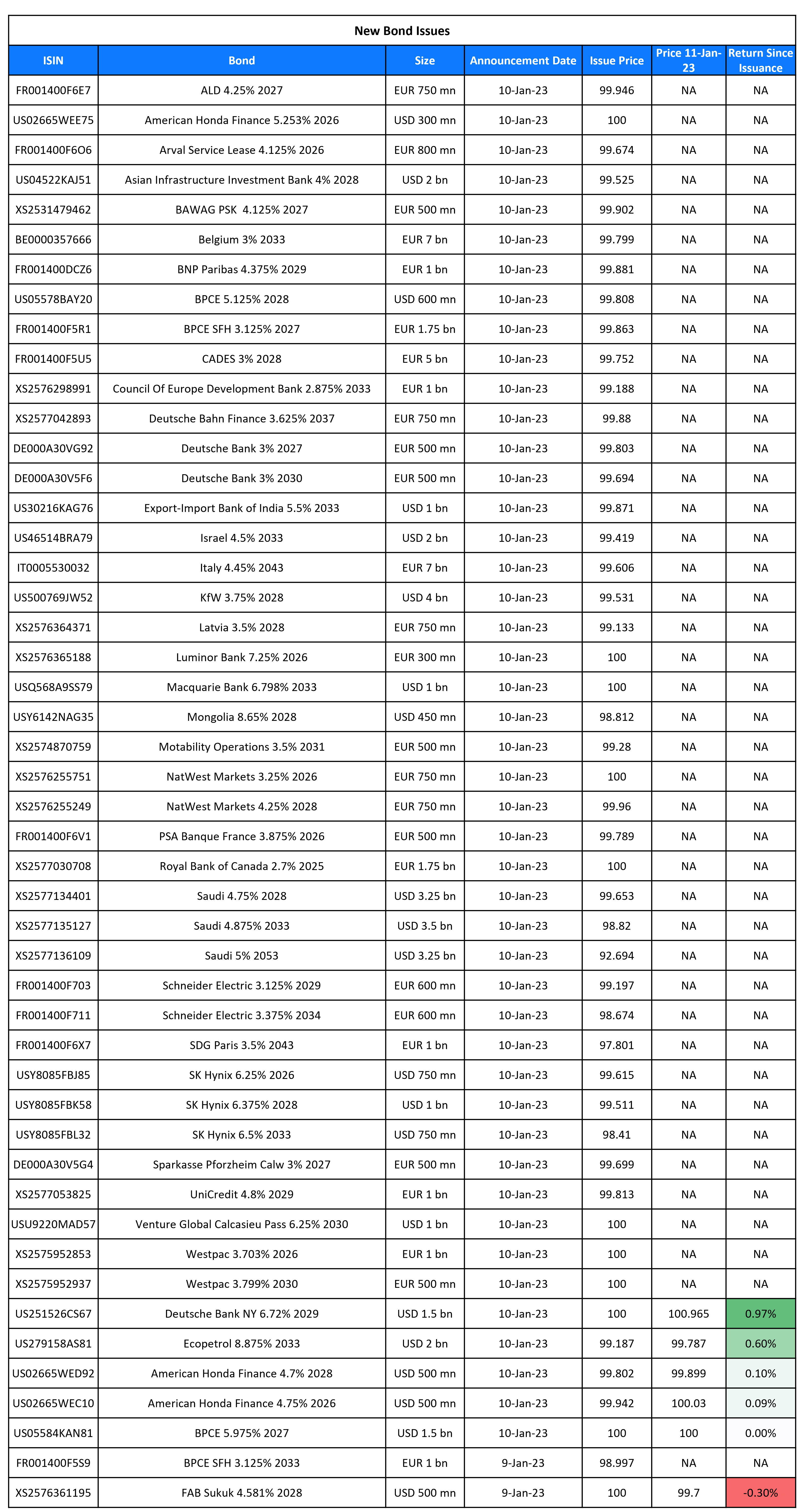 Exim Bank (India) raised $1bn via a 10Y sustainability bond at a yield of 5.517%, 30bp inside initial guidance of T+220bp area. The senior bonds received orders of over $3.7bn, 3.7x issue size. Proceeds will be used to finance or refinance projects that meet the issuer’s green or social project standards as outlined in its ESG framework. This was the first Indian issuer of dollar bonds since April 2022 when Greenko Wind Projects (Mauritius) raised $750mn.

Saudi Arabia raised $10bn via a three-trancher. It raised:

The bonds are rated A1/A (Moody’s/Fitch). Proceeds will be used for general domestic budgetary purposes.

SK Hynix raised $2.5bn via a three-trancher. It raised:

The bonds are rated rated Baa2/BBB- (Moody’s/S&P). Proceeds from the 3Y and 5Y notes will be used for general corporate purposes, while that from the 10Y green bond will be used to finance eligible projects in accordance with their green financing framework. If the company fails to reduce Scope 1 and Scope 2 GHG intensity by at least 57% by 2026 from a 2020 baseline, there will be a 75bp coupon step-up.

Mongolia raised $450mn via a 5Y bond at a yield of 8.95%, a strong 67.5bp inside initial guidance of 9.625% area. Proceeds from the new bonds will be used to repurchase all of its 5.625% 2023s, with the remaining proceeds to redeem its 8.75% 2024s, for which it has launched an exchange offer and tender offer. It is offering to exchange the 2023s and 2024s on a par-to-par basis including accrued interest. After considering the exchange ratio, the exchange price will amount to $1,012.023 in aggregate principal of the new notes for the two bonds plus interest, as per IFR. Bondholders can also choose to tender their bonds to be paid in cash, with the offer expiring on January 13. The new bonds were priced at a new issue premium of 47bp over its older 3.5% bonds due 2027 that yield 8.48%.

“Restoring price stability when inflation is high can require measures that are not popular in the short term as we raise interest rates to slow the economy. The absence of direct political control over our decisions allows us to take these necessary measures without considering short-term political factors”…But “we should ‘stick to our knitting’ and not wander off to pursue perceived social benefits that are not tightly linked to our statutory goals and authorities…Taking on new goals, however worthy, without a clear statutory mandate would undermine the case for our independence.”

“Without explicit congressional legislation, it would be inappropriate for us to use our monetary policy or supervisory tools to promote a greener economy or to achieve other climate-based goals…Decisions about policies to directly address climate change should be made by the elected branches of government and thus reflect the public’s will as expressed through elections”

“We maintain our view that Euro area growth will be weak over the winter months given the energy crisis but no longer look for a technical recession…Euro zone inflation is expected to be around 3.25% at the end of 2023 compared with 4.50% forecast earlier. Core inflation for the region is also seen slowing to 3.3% by the year-end as goods prices cool, but continued upward pressure is expected on services inflation due to rising labour costs.”

Given the “sticky” nature of inflation, Goldman expects the European Central Bank to remain hawkish and deliver 50 basis points hikes in February and March before slowing to 25 bps for a terminal rate of 3.25% in May.

“Issuers are taking this opportunity to get some funding done given there are still a lot of uncertainties out there…Right now, investors have cash and are positively disposed towards primary market investing.”

“Liquidity is still strong and there are good reasons to be optimistic”…Yet he cautions that “we are not completely out of the woods yet.” 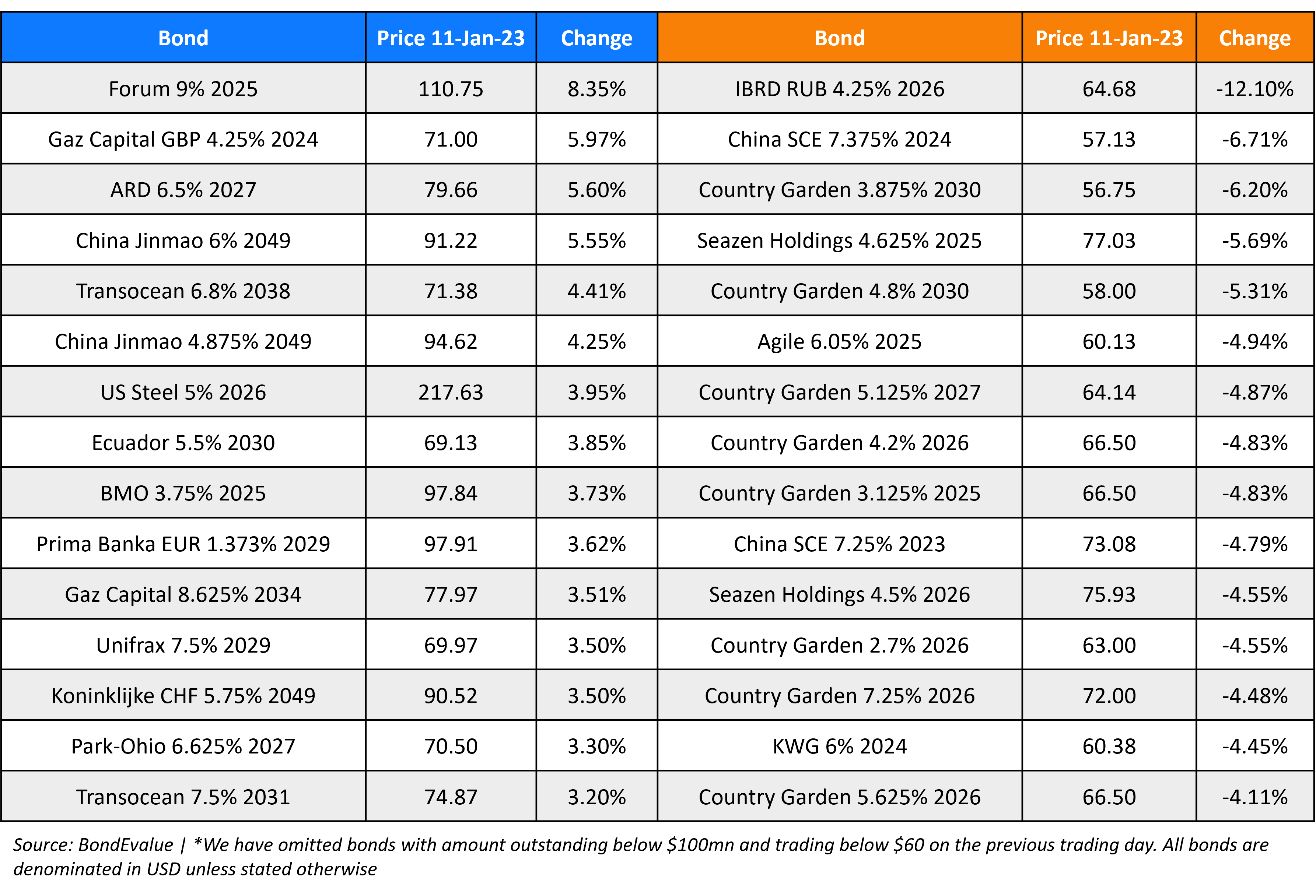