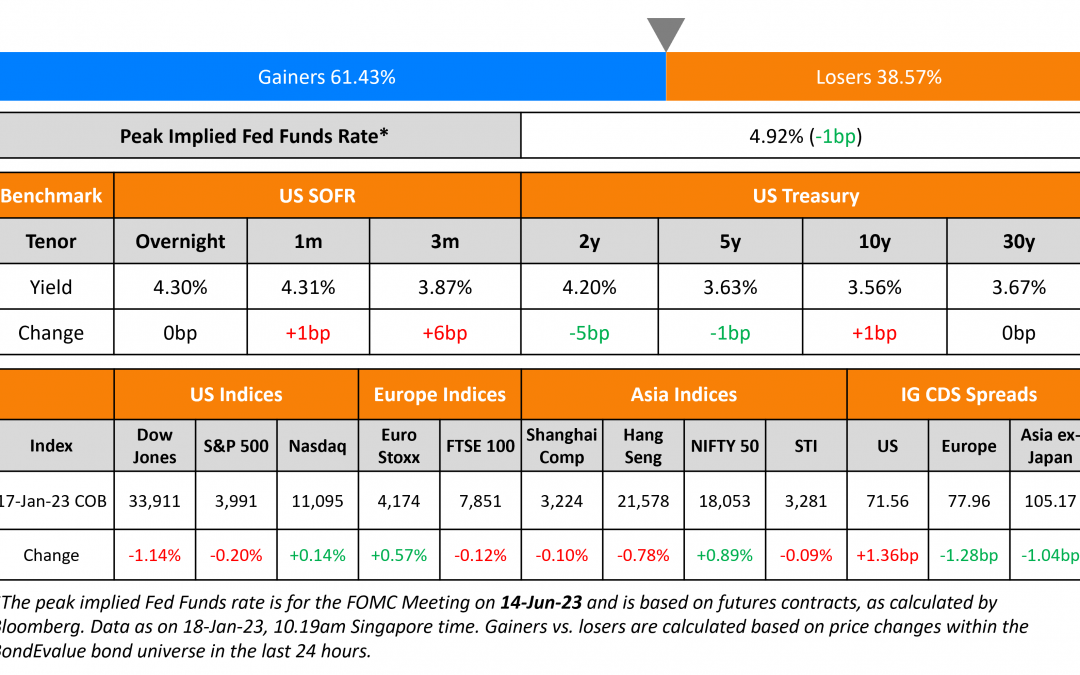 US 2Y Treasury yields moved 5bp lower while the rest of the curve was little changed. The peak Fed funds rate was 1bp lower at 4.92% for the June 2023 meeting. The probability of a 25bp hike at the FOMC’s February 2023 meeting stands at 95%, almost unchanged. US equity markets ended mixed with the S&P down 0.2% and Nasdaq up 0.1%. US IG CDS spreads widened 1.4bp and HY spreads were 9.1bp wider.

European equity markets ended slightly higher. The European main and crossover CDS spreads tightened by 1.3bp and 4.4bp respectively. Asian equity markets have opened mixed today. Asia ex-Japan CDS spreads tightened by 1bp. The BOJ’s monetary policy was maintained at status quo with YCC trading band maintained at 50bp on either side of its 0% target and short-term rates set at -0.1%. With markets expecting another policy tweak which was not the case, USDJPY jumped 2% higher to 131.11. 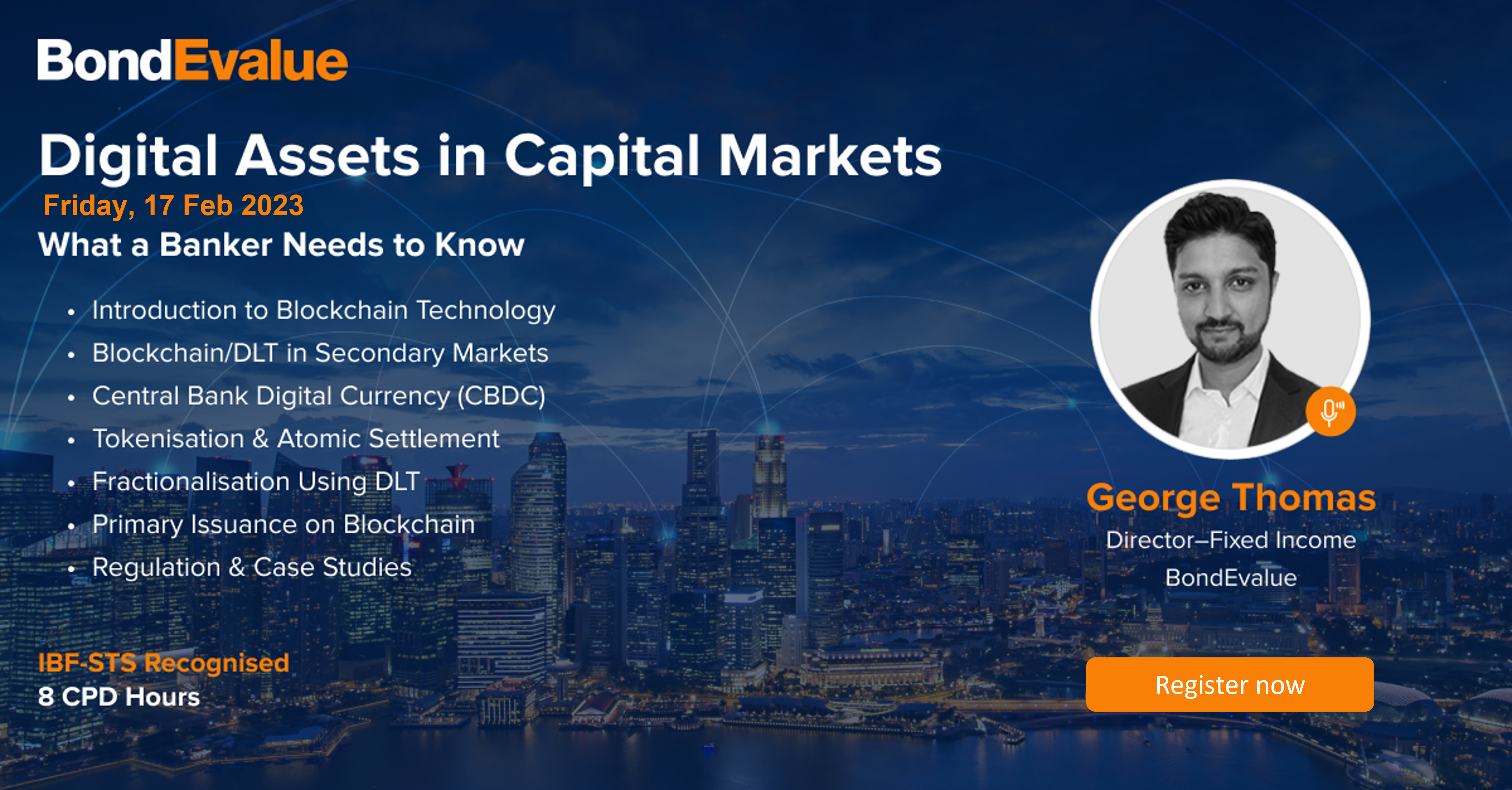 Asahi Life Insurance raised $375mn via a PerpNC5 bond at a yield of 6.9%, 60bp inside initial guidance of 7.5% area. The bonds have expected ratings of BBB, and received orders over $6.3bn, 16.8x issue size. APAC took about 84% and the remainder was taken by EMEA. Asset and fund managers took 79%, private banks took 11%, banks/financial institutions 7% and insurers/pensions 3%. The first call date is on 26 January 2028 and if not called, the coupons reset then and every 5 years at the US 5Y treasury yield plus the initial credit spread of 324bp and a 100bp step-up.

Morgan Stanley raised $6bn via a three-tranche deal. It raised:

Woori Bank raised $600mn via a 5Y sustainability bond (Term of the Day, explained below) at a yield of 4.955%, 40bp inside initial guidance of T+175bp area. The senior unsecured bonds have expected ratings of A1/A+. Proceeds will be used to (re)finance projects in accordance with the issuer’s green, social and sustainability bond framework. The new bonds are priced 4.5bp wider to its existing 2% 2027s that yield 4.91%.

“It’s going to be a glorious year for bond investing. The straight and simple way of investing in bonds has become real again… There is no better time to actually buy into equities from a long-term perspective”

“The curve trade in Credit Suisse reflects my view that one way or the other, in the next two years the drama around Credit Suisse will resolve for better or for worse. I believe it will be for better and that they recover…  think Credit Suisse’s CDS and bond curves are mis-priced because they imply that the bank will be seen as similarly risky many years down the road as it is today”

“Arguably, the policy U-turn has happened at a much faster pace than anyone’s imagination… The broad market is a buy-on-dip market, thanks to further fiscal, monetary and regulatory policy shifts… “strongly recommends” latching onto the reopening theme and picking up inexpensive internet companies.”

“Indonesian bonds would be expected to benefit most from the lower U.S. rates-lower U.S. dollar environment, while foreign investors are likely piling into Thailand bonds to pre-position for the full recovery in Chinese tourist arrivals”

“Conditions look favourable for a return of inflows in 2023… Fed is close to the end of their hiking cycle, the U.S. dollar has peaked, and importantly, China’s re-opening has fueled investor optimism towards the region” 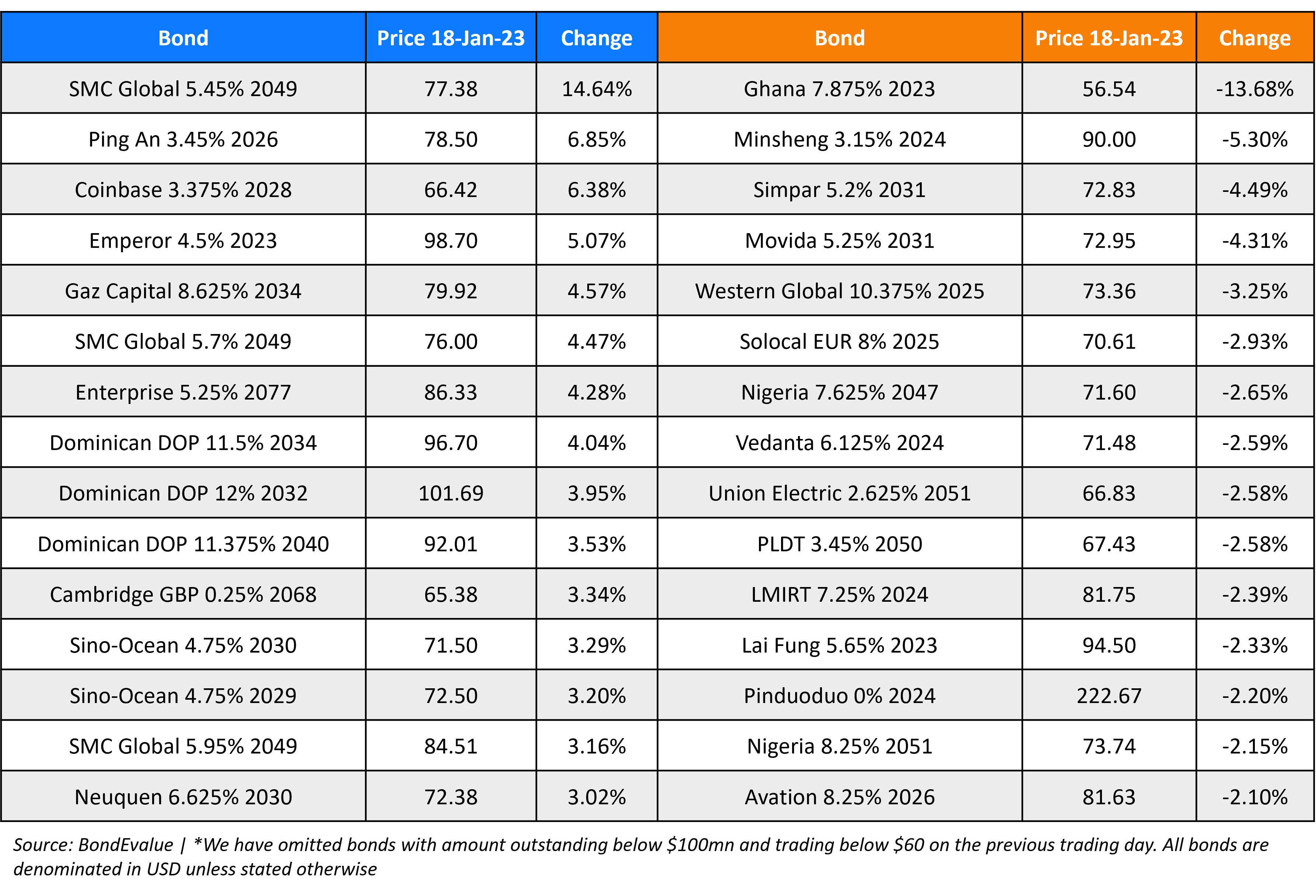