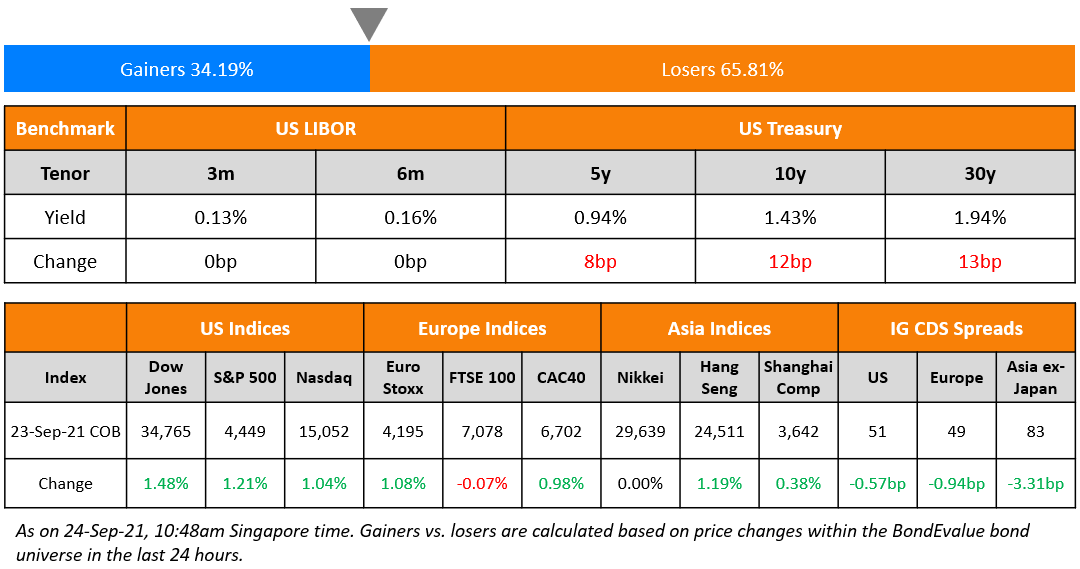 Wall Street ended higher again as the S&P and Nasdaq closed 1.2% and 1% higher with clear signs of a risk-on sentiment. US 10Y Treasury sold-off with yields rising sharply by 12bp to 1.43%. Energy led the sectoral gains, up 3.4% followed by Financials, Industrials, Materials and IT, up 1.3-1.6%. European stocks broadly rose with the DAX and CAC rallying 0.9% and 1% while FTSE ended marginally lower by 0.1%. Brazil’s Bovespa gained another 1.7%, adding to the week’s gains. In the Middle East, UAE’s ADX gained 0.6% as the UAE central bank starts to withdraw Covid stimulus measures. Asia Pacific markets have started broadly flat – Shanghai and HSI were down 0.1% each, Singapore’s STI was down 0.2% while Nikkei was up 1.9%. US IG and HY CDX spreads tightened 0.6bp and 2.4bp respectively. EU Main CDS spreads were 0.9bp tighter and Crossover CDS spreads tightened 3.2bp. Asia ex-Japan CDS spreads tightened 3.3bp. The PBOC injected liquidity of about $18.6bn into the banking system, its biggest net injection since January on Thursday to alleviate concerns about a liquidity crunch.

Eurozone PMIs came in softer than expected with the Manufacturing and Services PMIs at 58.7 and 56.3, lower than high expectations of 60.3 and 58.5 respectively. US weekly jobless claims were at 351k for the prior week, higher than expectations of 320k and up 16k from the week before. The Turkish Central Bank cut rates by 100bp in a surprise move with the Lira tumbling (scroll for details).

Egypt raised $3bn via a three-trancher. It raised:

The bonds have expected ratings of B/B+ (S&P/Fitch). The new 6Y priced 24bp wider to its existing 7.5% 2027s that currently yield 5.56%. This is Egypt’s second dollar bond issuance this year after raising $3.8bn in February via a three-trancher that consisted of 5Y, 10Y and 40Y tranches.

Bank of China Sydney branch raised $300mn via a 3Y green bond at a yield of 0.835%, 37bp inside initial guidance of T+70bp area. The bonds have expected ratings of A1/A/A, in line with the issuer, and received orders over $900mn, 3x issue size. Proceeds will be used to finance and/or refinance eligible green projects under the bank’s sustainability series bonds management statement. The new bonds are priced 2.5bp wider to its 0.8% green 2024s issued by Bank of China Singapore branch that yield 0.81%.

Jiayuan International braved through the storm in the China real estate space to raise $100mn via a tap of its 11% 2024s bond at a yield of 13%, 25bp inside initial guidance of 13.25% area. The bonds have expected ratings of B3/B+ (Moody’s/Fitch), and received orders over $600mn, 6x issue size. Proceeds will be used for debt refinancing. This along with Xinhu Zhongbao’s deal were the only dollar deals from mainland developers this week.

Oxley Holdings raised S$85mn via a tap of its 6.9% 2024s at 100, unchanged from initial guidance. The bonds are unrated and currently trade at 99.286 yielding 7.18%. Proceeds will be used to fund Oxley’s tender offer launched on September 8 to buy back at par a portion of its outstanding S$150m 5.7% notes due 2022 The bonds will be issued by Oxley MTN and guaranteed by Oxley Holdings.

CCBI raised $700mn via a 5Y bond at a yield of 1.539%, 35bp inside initial guidance of T+100bp area. The bonds have expected ratings of A1/A (Moody’s/S&P), and received orders over $2.15bn, 3.1x issue size. The bonds are issued by wholly-owned subsidiary State Elite Global and guaranteed by China Construction Bank Corp Hong Kong branch (CCB HK branch). The new bonds are priced 13.9bp wider to its existing 1.46% 2026s issued by CCB HK branch that yield 1.4%. Proceeds will be used for refinancing and general corporate purposes.

Xinhu Zhongbao raised $250mn via a 3NCNP2 bond at a yield of 11%, unchanged from initial guidance. The bonds have expected ratings of B- (S&P). The bonds are issued by Xinhu (BVI) 2018 Holding and guaranteed by parent company Xinhu Zhongbao. The bonds have a call option and put option both exercisable at par on 28 September 2023. There is an optional coupon step-up which allows the issuer to increase the interest rate, effective from 28 September 2023. Proceeds will be used for offshore debt refinancing.

Huaibei City Construction Investment raised $300mn via a 3Y bond at a yield of 2.75%, 25bp inside initial guidance of 3% area. The bonds are unrated and are supported by a letter of credit from Huishang Bank Corp. The issuer is the investment and financing vehicle for urban development under the State-owned Assets Supervision and Administration Commission of Huaibei city in China’s Anhui province. Proceeds will be used for debt repayment.

Jiangxi Zhengbang raised $60mn via a 3Y bond at a yield of 1.85%, 30bp inside the initial guidance of 2.15% area. The bonds are unrated and are issued by wholly owned subsidiary Zhengbang International and guaranteed by Jiangxi Zhengbang Technology, a pig breeding company. The bonds are supported by a letter of credit from ICBC Jiangxi branch. Proceeds will be used for debt refinancing and the construction and development of livestock breeding projects.

Maldives’ HDC postponed a $250mn 3Y sustainability bond deal after failing to achieve demand for its target issue size. The unrated bond deal was announced at final guidance of 13%, and a letter of support from Maldives’ finance ministry. This would have been HDC’s debut offshore transaction.

“Common Equity Tier 1 (CET1) Ratio is a financial ratio applicable to banks to measure its core capital as against its Risk Weighted Assets (RWA). Core Capital (CET1 Capital) includes common equity and stock surplus (share premium), retained earnings, statutory reserves, other disclosed free reserves, capital reserves representing surplus arising out of sale proceeds of assets and balance in income statement at the end of the previous financial year. RWAs are calculated to measure the minimum regulatory capital required to be held by banks to maintain solvency. The calculation methodology is such that the riskier the asset, the higher the RWAs and the greater the amount of regulatory capital required. CET1 capital must be at least 4.5% of RWAs according to Basel III. Contingent Convertible (CoCos) bonds/AT1s commonly have triggers based on CET1 ratios – if the bank’s CET1 ratio falls below a certain threshold, the bonds would convert into equity.”

Standard Chartered is “much less concerned than the initial market reaction.”

“We’re not really directly affected at all by the events of the last week or so.”

The direct exposures of UK banks to the Chinese firm are “not material, so it’s really not a concern in the first-round effect.”

On China injects more liquidity amid speculation about Evergrande restructuring

“We’re still relatively sanguine about the risk that Evergrande’s collapse triggers a financial crisis or economic crash in China.” “Policymakers will use their control of the banking system to prevent financial strains spreading beyond highly-leveraged developers.”

“It needs to take immediate measures to contain all these risks.” “We expect both sector’s share prices to see a strong rebound in the near term.”

“I think we may be seeing a temporary reprieve with some repayments aiding to provide a better-than-expected situation than many would expect.” “This also comes along with some injection of short-term funds by the PBOC, which suggests that they are monitoring the situation closely and are ready to step in if the economy comes under risks.”
Gary Dugan, chief executive officer at the Global CIO Office

Evergrande’s statement on repayment “will be helpful and hopefully suppress some of the inevitable volatility and downside after the holiday break.” “For confidence to return more meaningfully, it will need the market to see sight of the broad restructuring plans for Evergrande.”

On global debt near all-time high of $300tn

“At a fresh all-time high of $296 trillion, total global debt, which includes government, household and corporate and bank debt, is now more than $36 trillion above the pre-pandemic level. However, the global debt-to-GDP ratio declined for the first time since the onset of the pandemic.”

“If the borrowing continues at this pace, we expect global debt to exceed $300 trillion,” said Tiftik.

According to Chamorro, investors are witnessing the “outperformance of the D rated countries.” “The market breathes a sigh of relief as the Belize restructuring looks almost done, and in Lebanon, as there is now some hope for a future restructuring.” 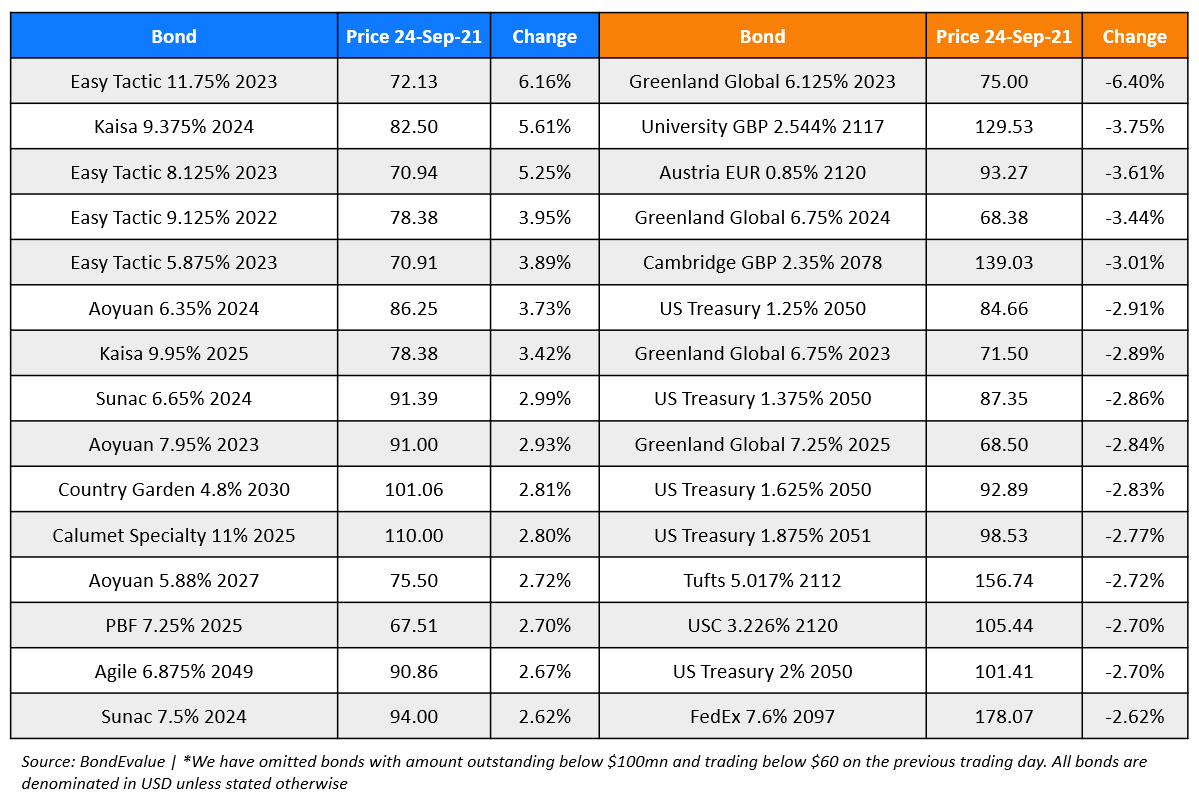