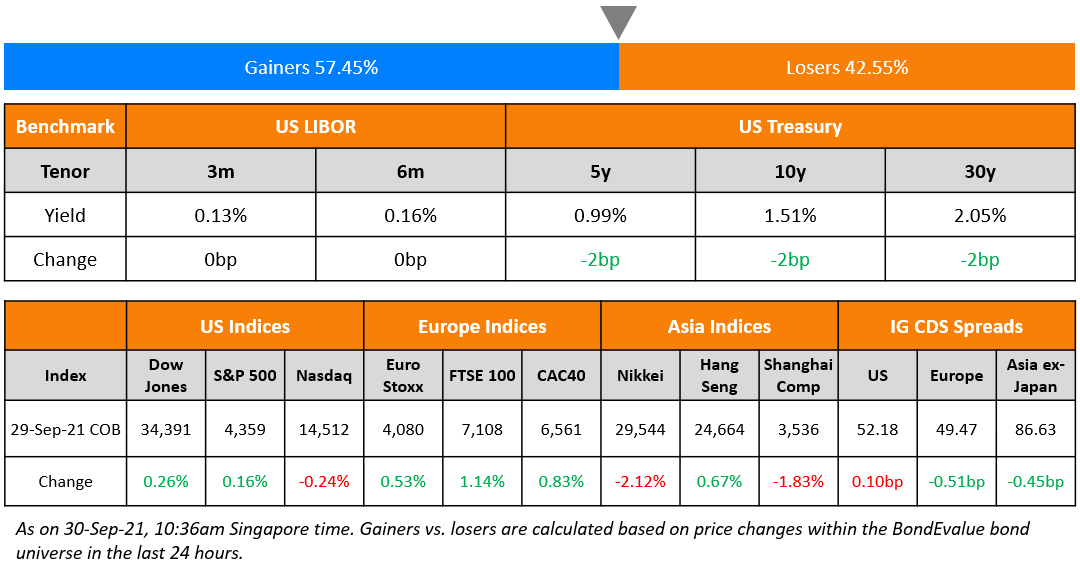 US markets ended mixed after selling-off sharply a day earlier as the S&P climbed 0.2% while the Nasdaq Composite slipped 0.2%. US 10Y Treasury yields eased 2bp to 1.51% after a sharp rise over the last week. Utilities and Consumer Staples led the gains while Materials and Communication Services led the losers. European stocks on the other hand jumped with the DAX and CAC up 0.8% each and FTSE up 1.1%. Brazil’s Bovespa also rose 0.9%. In the Middle East, UAE’s ADX ended 0.3% lower while Saudi TASI ended flat. Asia Pacific markets are mixed with Shanghai up 0.5%, HSI down 1%, STI up 0.6% and Nikkei down 0.3%. US IG CDS spreads were 0.1bp wider while HY CDX spreads tightened 1.3bp. EU Main CDS spreads were 0.5bp tighter and Crossover CDS spreads tightened 6.9bp. Asia ex-Japan CDS spreads widened 0.2bp.

EU consumer confidence for September improved from the prior month’s -5.3 but still stood at -4. Spanish HICP inflation came at 4%, higher than forecasts of 3.7%. Weekly US Crude inventories saw an increase of 4.58mn, after seven straight weeks of decline with the EIA saying that production rebounded after recent storms.

Last call for today’s masterclass on New Bond Issues & Credit Ratings, designed and curated for bond investors and professionals to learn about the new bond issue process, terminology, timelines and analysis. The session will also cover understanding and interpreting credit ratings. The masterclass will be conducted live via Zoom by Dr. Rahul Banerjee, Founder & CEO of BondEvalue and ex-debt capital market banker with two decades of experience across premier banks such as Standard Chartered, Credit Suisse and Citi. Click on the image below to reserve your seat.

Arab Petroleum Investments Corp (Apicorp) raised $750mn via a 5Y green bond at a yield of 1.1483%, 10bp inside initial guidance of MS+50bp area. The bonds have expected ratings of Aa2/AA (Moody’s/Fitch), and received orders over $2.1bn, 2.8x issue size. The bonds will be used to finance, refinance or invest in projects linked to Apicorp’s green finance framework, including green buildings, renewable energy and pollution prevention and control. The new bonds are priced 11.2bp tighter to its existing 1.26% non-green 2026s that yield 1.26%.

Sembcorp Industries raised S$675 via a 10.5Y sustainability-linked bond (SLB) at a yield of 2.66%, inline with initial guidance of 2.66%. The bonds are unrated, and received orders over S$700mn, 1.07x issue size. The bonds will be issued by Sembcorp Financial Services and guaranteed by Sembcorp Industries. There is a one-time 25bp per annum coupon step-up effective from the first interest payment date on or after April 1 2026 if the energy and urban developer fails to meet the sustainability performance target of achieving GHG emissions intensity at 0.40 tonnes of carbon dioxide per megawatt hour produced (tCO2e/MWh) or lower as of December 31, 2025. This is Singapore’s second sustainability-linked bond offering, following Surbana Jurong’s S$250mn 2031s issued in February.  The new bonds are priced 3bp tighter to its existing 2.45% green 2031s that yield 2.69%.

Ganzhou Urban Investment Holding Group raised $150mn via a 3Y bond at a yield of 3%, 50bp inside the initial guidance of 3.5% area. The bonds have expected ratings of BBB– (Fitch). The issuer is the primary infrastructure investment entity of Ganzhou city in China’s Jiangxi province and has businesses in infrastructure construction and property development.

Jiangsu Dieshiqiao Home Textile raised $100mn via a 3Y bond at a yield of 2.04%, unchanged from initial guidance. The bonds are unrated and are supported by a letter of credit from Bank of Shanghai Nanjing branch. The issuer is an SOE in the Haimen district, Jiangsu province.

Chengdu Yang An New Town Development raised $35mn via a 3Y bond at a yield of 1.9%, inline with initial guidance. The bonds have expected ratings of A+ by local rating agency Pengyuan, and are supported by a letter of credit from ICBC, Sichuan branch. The issuer is one of the major SOEs for investment, financing, operation and management of city infrastructure construction in Qionglai city, China’s Sichuan province.

Average Inflation Targeting (AIT) is a type of strategy by the Fed where 2% is average inflation over time. In essence, an inflation rate of 2% is not a cap and hence the Fed may let inflation exceed 2% modestly and temporarily to make up for past low inflation. The key aim of this policy shift is anchoring inflation expectations especially since their earlier inflation policy was seen with as a flexible inflation targeting with the Fed being symmetric in responding towards inflation overshooting or undershooting of the target. For example, the latest September 2021 FOMC statement, ‘the Committee will aim to achieve inflation moderately above 2 percent for some time so that inflation averages 2 percent over time”, showing that the Fed is not symmetric in its approach to inflation and rather uses AIT.

“It is a problem for China, problem for its housing market. A problem for the whole segment that relies on this. There’s a lot of jobs related to this and a lot of commerce related to this.” “The default rate has dropped below 2%, and what you’re going to see is about 1%. I wouldn’t worry too much at this stage about defaults,” he said.

“A lot of them have not wanted to retreat from their positioning.” For tech stocks, “the valuations remain elevated and they remain at risk when yields take these sharp jumps up.” “There’s a lot of caution about exactly where things go from here.”

“Everything gets thrown out, so that’s why we’re seeing some of the declines in tech across the board.”

On Bahamas government’s intention to live up to obligations to avoid any defaults – Philip Davis, Prime Minister and Minister of Finance of Bahamas

“I may have mentioned at some other occasion that we have brought Mr. Simon Wilson, who is the substantive financial secretary, back in the office and we are now looking and assessing our debt arrangement to determine how we best approach and how we do avoid any default,” he said. “We intend to live up to our obligations and where we are unable to, we intend to renegotiate terms, so as not to be in default.”

“The question is whether there will be broader spillover effects on the Chinese economy,” said Wong. “That — we are monitoring closely but overall our assessment remains that China’s economy will still grow strongly this year.” 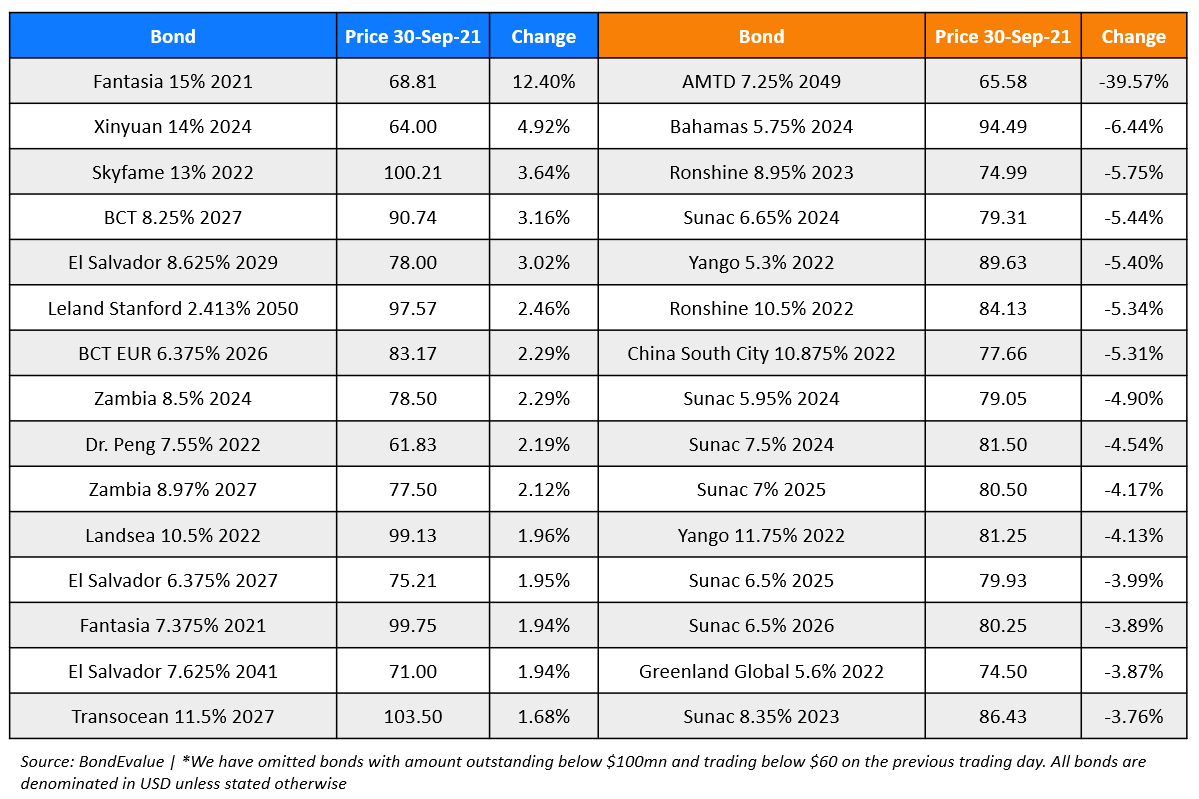