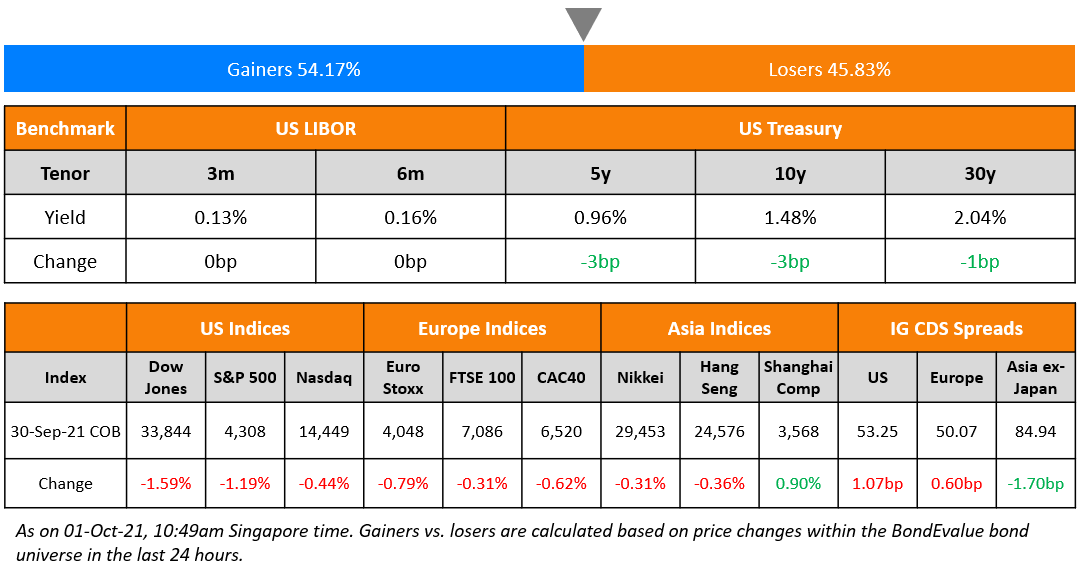 US markets ended lower with the S&P down 1.2% and Nasdaq down 0.4%. US 10Y Treasury yields eased 3bp to 1.48% after a sharp rise over the last week. All sectors were in the red with Industrials down the most by 2.1% followed by Consumer Staples, Financials and Real Estate down 1.6-1.9% . European stocks also ended weak with the DAX, CAC and FTSE down 0.7%, 0.6% and 0.3% respectively. Brazil’s Bovespa was marginally lower, down 0.1%. In the Middle East, UAE’s ADX ended 0.4% lower while Saudi TASI ended 1% higher. Asia Pacific markets are down again. While Shanghai and HSI are closed due to the “Golden Week holidays”, STI was down 1.2%, Nikkei down 1.9% and Jakarta down 0.4%. US IG CDS spreads were 1.1bp wider while HY CDX spreads widened 4.2bp. EU Main CDS spreads were 0.6bp wider and Crossover CDS spreads widened 4.6bp. Asia ex-Japan CDS spreads tightened 1.7bp.
US weekly jobless claims rose by 11k to 362k, much higher than forecasts of 335k adding to the recent string of weak data. US Q2 GDP was revised 0.1% higher to 6.7%. The US House and Senate agreed a stopgap bill to prevent a government shutdown until December 3, 2021. Italian HICP inflation came at 3%, inline with forecasts while German HICP was slightly higher than forecasts of 4%, coming at 4.1%.

Join us for modules 5-8 of the Bond Traders’ Masterclass scheduled for next week. Each of the four modules will offer a deep dive on specific topics such as Using Excel to Understand Bond Calculations, CoCo/AT1 Perpetual Bonds, Sustainable Bonds and High Yield Bonds. The sessions on CoCo/AT1 Perpetual Bonds will be taught by bank capital expert and senior debt capital market banker Pramod Shenoi, President at CreditSights Singapore. We also have Asian high yield bond expert Florian Schmidt who will offer meaningful insights on the ongoing Evergrande crisis, effects on the overall real estate sector and key risks to watch out for in High Yield Bonds session on October 7. Click on the image below to reserve your seat. 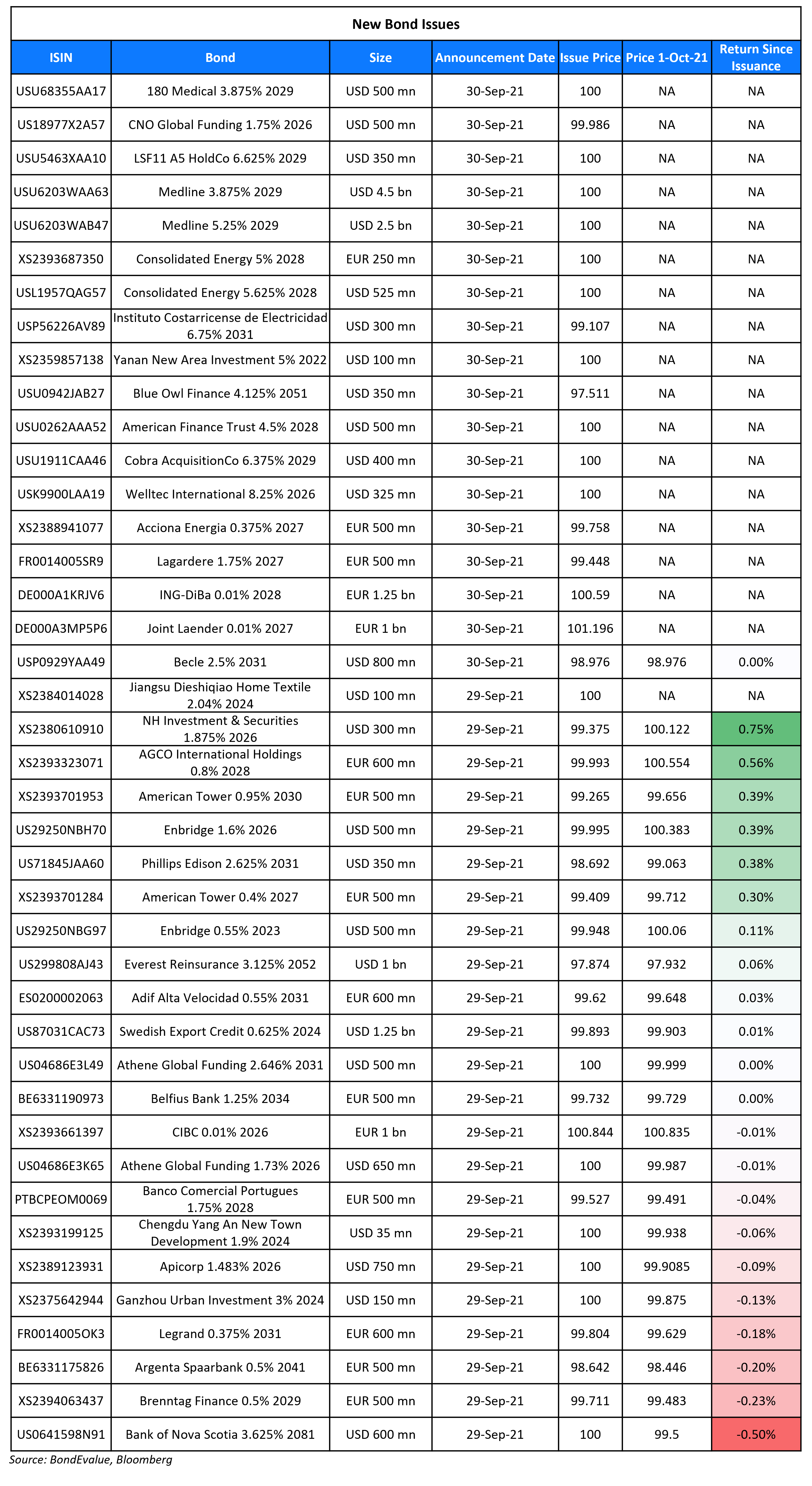 Housing Development Finance Corp (HDFC) raised INR7.39bn ($99.5mn) via a Perp NC9 AT1 masala bond (Term of the day, explained below) at a yield of 7.55%. The unrated masala bonds are issued in INR and the coupons will be paid in USD. The coupons are fixed at 7.55% and the notes are first callable on 30 September 2030.
Medline raised $7bn via a two-tranche deal, the largest dollar denominated junk bond deal since 2015. It raised:
The secured 7.5NC3 bonds have expected ratings of B1/B+, while the unsecured 8NC3 bonds have expected ratings of Caa1/B-. The bonds will be issued by Mozart Debt Merger Sub Inc.
Yanan New Area Investment Development raised $100mn via a 364-day bond at a yield of 5%, 20bp inside the initial guidance of 5.2% area. The bonds are unrated. Proceeds will be used for general corporate purposes, including refinancing its indebtedness, financing project developments and replenishing working capital. The issuer is an integrated urban management and operation entity wholly owned by Yan’an Sasac in China’s Shaanxi province.

Masala Bonds are bonds denominated in Indian Rupees (INR) that are issued outside of India. These bonds come under the External Commercial Borrowings (ECB) route as categorized by the Reserve Bank of India (RBI). Masala bonds are typically issued by Indian entities that are looking to raise debt offshore. If an Indian corporate that earns majority of its revenues/profits in INR has to raise money in foreign currency, the interest and principal have to be paid in foreign currency, which can lead to foreign currency risk. Since masala bonds are denominated in INR, the issuer does not bear foreign currency risk. This makes masala bonds an issuer-friendly fund raising option. From an investor’s perspective, masala bonds would offer a yield pick-up as rates on INR debt are higher than rates on hard currency (USD, EUR, GBP, JPY) debt. However, investors may need to hedge the currency risk to protect against depreciation of the INR.

Dickie Hodges, a bond fund manager at Nomura Asset Management
“Central banks have been trying to convince us that inflation is transitory.” “Given the circumstances I think they’ve been in denial — if you can show me one thing that’s cheaper today than it was before the pandemic I’d be surprised. So I think a reassessment has been overdue.”
Kelsey Berro, fixed income portfolio manager at JPMorgan Asset Management
“Sustainable moves higher in Treasury yields are typically more globally oriented. We don’t see it as a coincidence that the hawkish Bank of England meeting coincided with this move higher in rates.”
Sandra Holdsworth, head of rates for the UK at Aegon Asset Management
“We’ve gone through most of this year thinking the BoE would raise rates earlier than markets thought, and ahead of the Fed.”
Mike Riddell, a portfolio manager at Allianz Global Investors
“The dominant driver of long dated global bond yields seems to simply be the growing energy crisis.” “It’s not immediately logical because the energy crisis is likely to be a short- to medium-term supply shock, and shouldn’t result in structurally higher central bank interest rates. But the surge in gas prices is creating longer term inflation uncertainty, where this additional risk premium is being built into [bond yields].”
On recent bond selloff manifestation of economy picking up steam
Art Hogan, chief strategist at National Securities
“It’s a manifestation of the idea that the economy is picking up steam.” “Rising yields don’t have to derail the bull market — especially if they’re rising for the right reasons.” “Yields for most of this year have been like a beach ball being held under water — and they’re finally getting out and getting to a level they should be,” he said. “They’re normalizing and I think that that is an expression of the fact that the economy is doing better, and if the economy’s doing better, then the economically sensitive cyclicals sectors likely will do better as well.”
Jim Paulsen, chief investment strategist at the Leuthold Group
“A 30-basis point rise on a 6% growing economy with solidly double-digit profit growth, that type of growth, that type of fundamental leverage in the economy and companies can offset a lot of problems for the stock market.” “This rate rise so far has been all about real yields rising, which means that the 10-year is not going up because people are getting more frightened by higher inflation — it’s going up because the bond market’s reflecting stronger real growth,” said Paulsen.
Chris Zaccarelli, chief investment officer at Independent Advisor Alliance
“I don’t think 1.5% on a 10-year is any reason to be concerned, and you’ve seen that level previously, without any issues,” he said.
On riskier CLOs coming to masses via new ETF targeting BBB to B debt
John McClain, high-yield bond portfolio manager at Brandywine Global Investment Management
“I don’t think retail really needs to be getting into CLO BBBs, and I don’t love packaging less liquid instruments into liquid wrappers.” “Dipping down in the stack you are picking up pennies in front of a liquidity steamroller if the market shuts down.”
Eric Balchunas, an ETF analyst with Bloomberg Intelligence
The new Janus Henderson B-BBB CLO exchange-traded fund “will serve a very niche audience who would likely have bought this stuff anyway but likes the convenience of an ETF.”
On joint venture between HSBC and Temasek to launch debt financing platform for sustainable infrastructure projects
According to a joint statement by HSBC and Temasek
“The platform will target renewable energy and storage, water and waste treatment and sustainable transport to help meet carbon reduction targets and build resilience to offset the impact of climate change.”
Noel Quinn, group chief executive of HSBC
The partnership “aims to tackle some of the biggest barriers to financing sustainable infrastructure where it’s needed the most.”
Dilhan Pillay, CEO of Temasek International
“Public funding alone will not cover the scale of climate change mitigation and transition required across Southeast Asia.” “By joining forces, we can catalyse our capital, multiplying impact and scaling to meet the opportunities.” 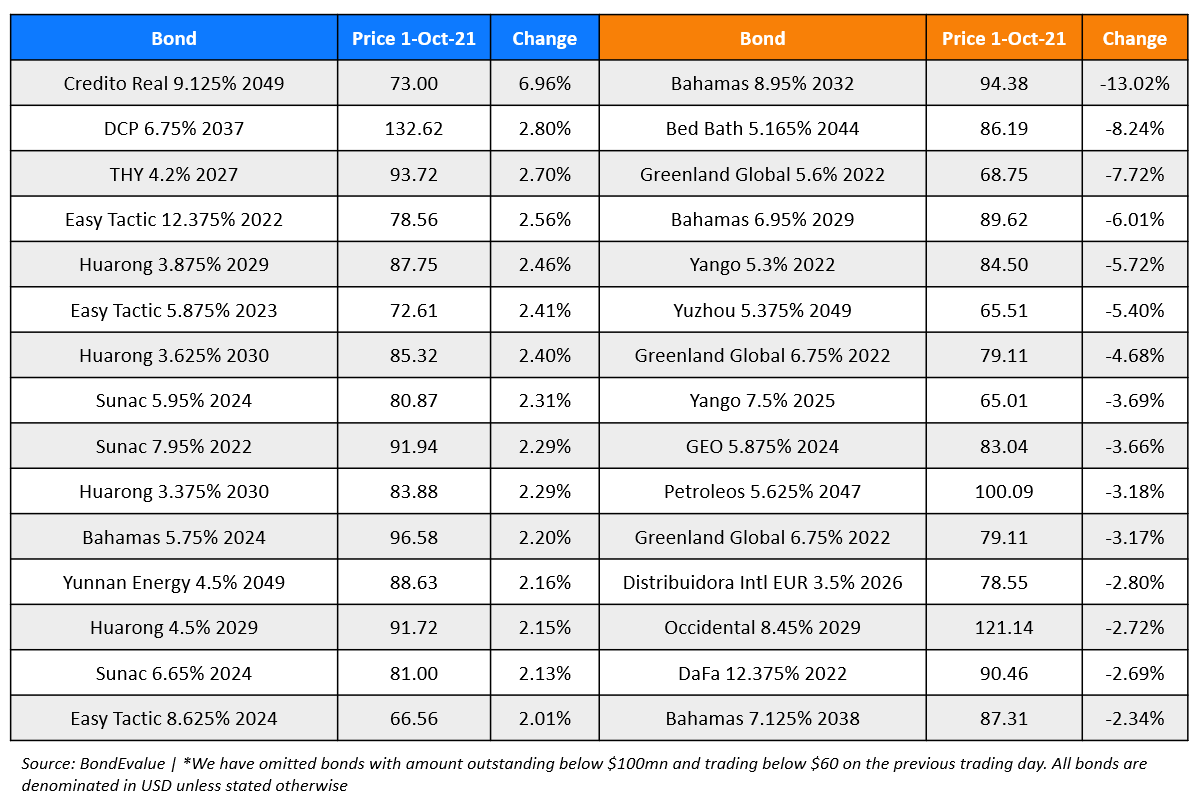