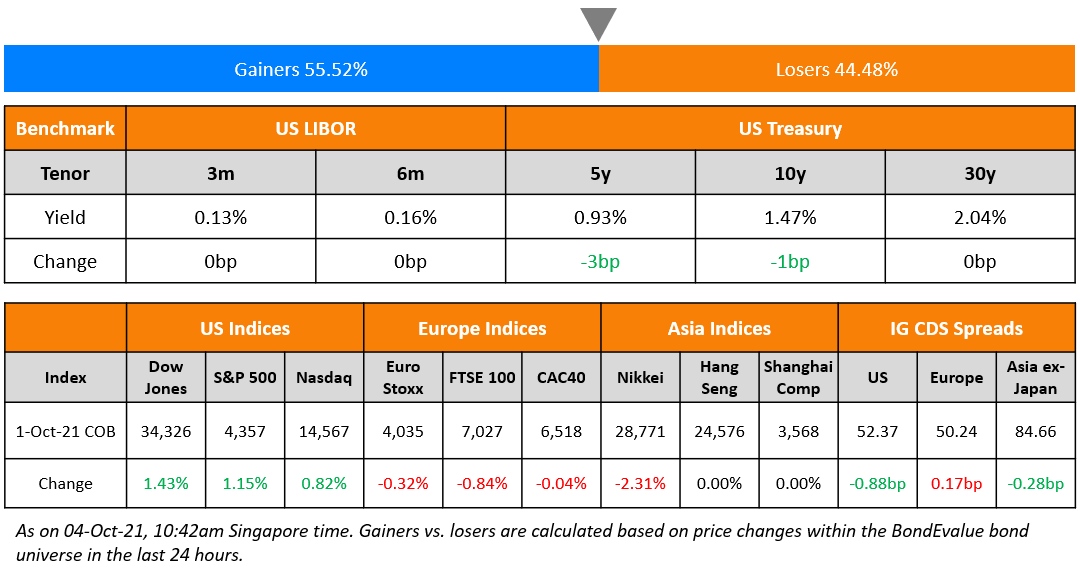 US markets ended higher on Friday to end a volatile week for equities as the S&P was up 1.2% and Nasdaq up 0.8%. US 10Y Treasury yields eased 1bp to 1.47%. Energy led the sectoral gains, up 3.3%, followed by Communication Services, Materials and Financials up over 1.6%. European stocks were mixed with the DAX falling 0.7%, FTSE down 0.8% while CAC was flat. Brazil’s Bovespa was marginally lower, down 0.1%. In the Middle East, UAE’s ADX and Saudi TASI were 0.4% lower. Asia Pacific markets are down again. While Shanghai remains closed, HSI and Nikkei were down 2.3% and 1% while STI was up 1.4%. US IG CDS spreads were 0.9bp tighter while HY CDX spreads tightened 3.7bp. EU Main CDS spreads were 0.2bp wider and Crossover CDS spreads widened 0.8bp. Asia ex-Japan CDS spreads tightened 0.3bp.
US ISM Manufacturing PMI came at 61.1, beating expectations of 59.6, with the prices paid component soaring to 81.2 after a slight dip last month to 79.4 and beating forecasts of 78.5, suggesting inflationary pressures. German retail sales missed forecasts of 1.9%, coming at 0.4% YoY. PMIs for Germany, France, Spain and Italy were almost in-line with expectations. EU HICP inflation came at 1.9% YoY, inline with forecasts. 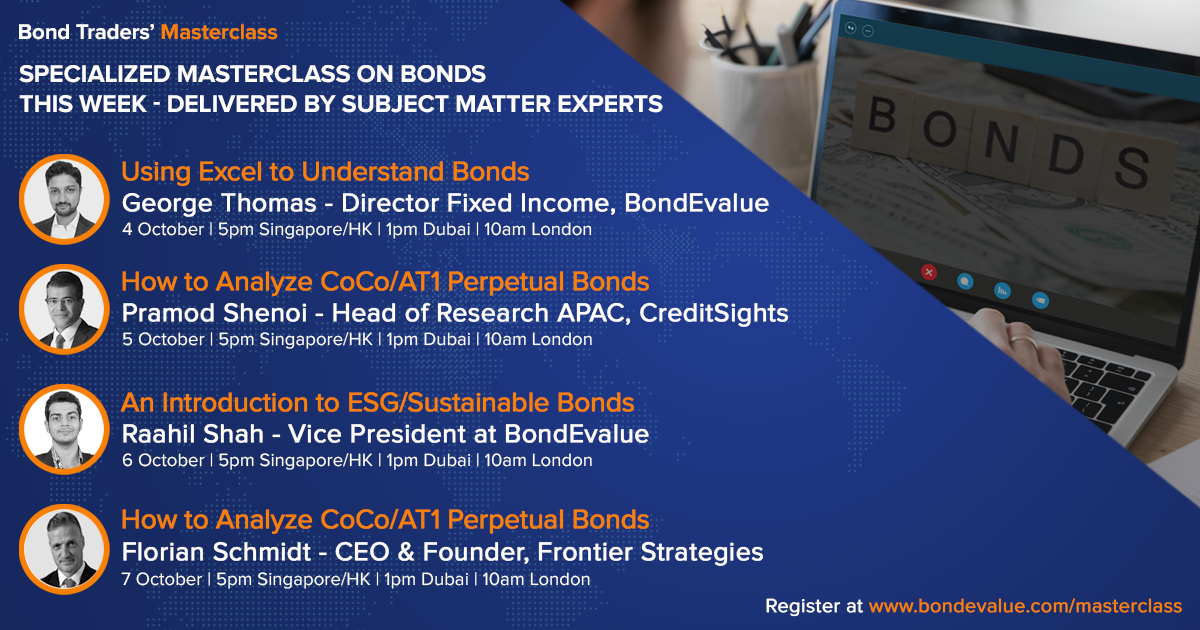 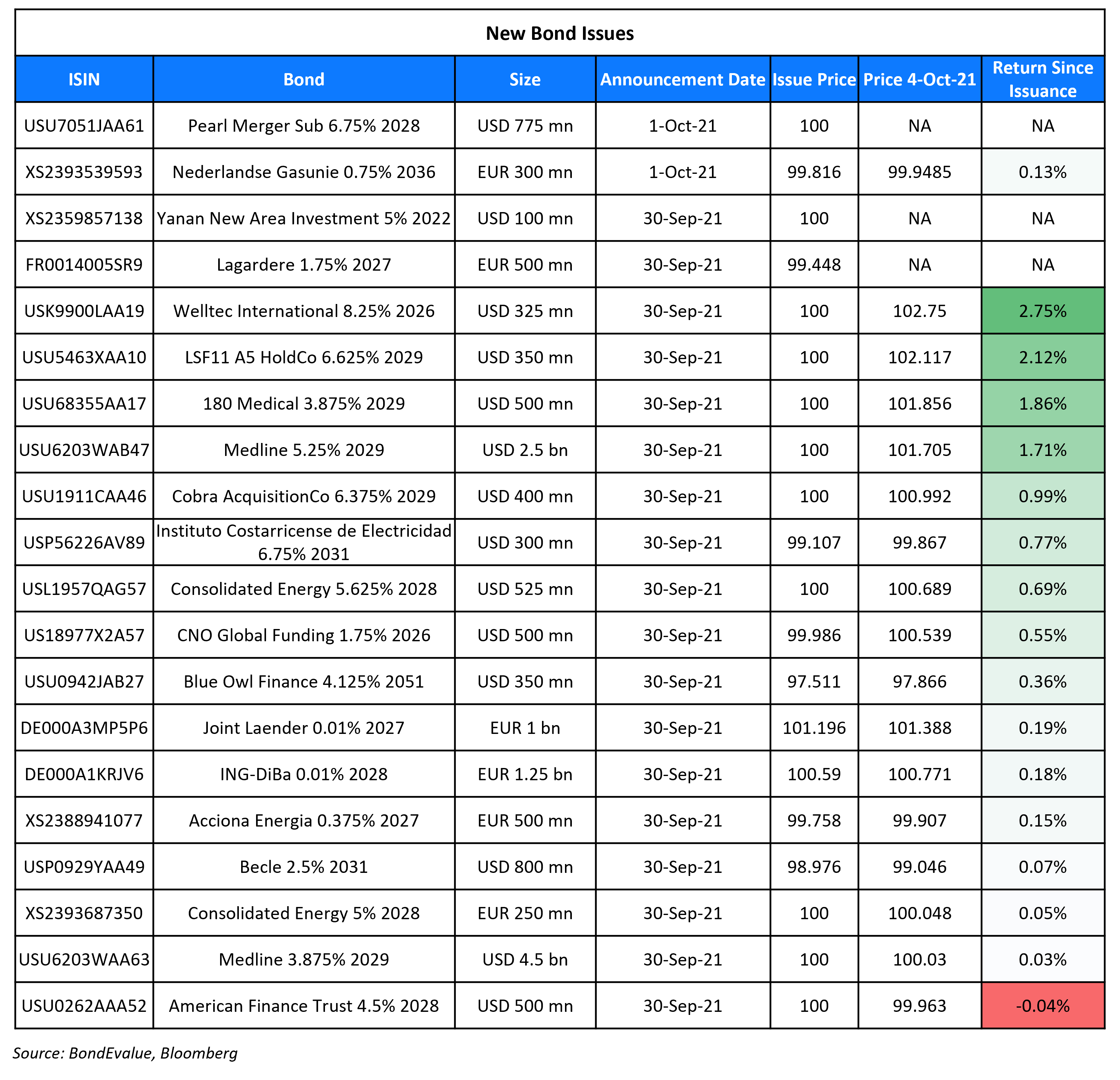 Catastrophe Bonds also referred as Cat Bonds are risk-linked securities that are designed in favor of the issuer as these allow the transfer of risks related to a major catastrophe or a natural disaster to the investors. These are generally high yield debt instruments that payout to issuers in case of specific triggers. These bonds essentially act as insurance policies against natural disasters and are generally purchased by governments, insurance and reinsurance companies. In the event of a trigger event, the proceeds are paid to the borrower and the principal repayment and interest payments are either deferred or cancelled. In case the trigger event does not occur, the borrower continues to pay the interest and the principal as scheduled, similar to a regular bonds. These bonds have gained traction as the frequency of natural disasters is on the rise.

On the view that first rate hike could come at the end of 2022 – Loretta Mester, Cleveland Fed Bank President

“I think we’ll see progress in the labor market and progress on inflation coming back down,” Mester said.

On the risk of disorderly taper if Fed does not take quick action – Mohammed El-Erian, chief economic adviser at Allianz SE and president of Queens’ College, Cambridge

“When it comes to an orderly taper, the window is closing.” “We’re still buying $40 billion of mortgages every month,” he said. “The problem in the housing market is not that it needs support. It’s that it is pricing out Americans. Americans can no longer afford what’s happening in the housing market.” “We’re still buying $120 billion of assets every single month, what we have been buying since the worst of the Covid crisis,” he added,. “Does it make sense in this environment when demand isn’t a problem, when the bond markets are wide open?”

On headwinds for global economy in final quarter of 2021

“Expectations of a swift exit from the pandemic were always misplaced.” “Full recovery will be measured in years, not quarters.”

Alicia Garcia Herrero, chief economist for Asia Pacific at Natixis
“Central banks are playing with fire by tapering to avert inflationary pressures without being fully sure of where we stand in the cycle.”

Bruce Richards, Marathon Asset Management Chief Executive Officer
“The first obligation is going to make sure that homeowners who bought those homes take delivery and are made whole.” “At the very end of the pecking order are offshore bondholders.” “We don’t know what that recovery value is but we’re getting close to the point where it now makes sense” to buy, Richards said.
Alejandra Grindal, chief economist at Ned Davis Research Inc
“A disorderly default of Evergrande is unlikely because of the broad-based risk it presents to a large amount of the Chinese population.” “The government is probably less concerned about restructuring the offshore debt.”
James Feng, founding partner of Poseidon Capital Group
“It’s highly likely that Evergrande’s offshore bondholders will be wiped out,” he said.
Christina Zhu, Moody’s analyst
“Given the gigantic size and importance of the sector to the economy, we expect China to make every effort to avoid a hard landing, especially at a time when the economy is facing heightened uncertainty amid a pandemic.”
Zhou Hao, senior emerging markets strategist at Commerzbank AG
“Regulators will make sure no systemic financial crisis will happen, which is their bottom line.” “At the same time, they will punish developers that are highly leveraged. 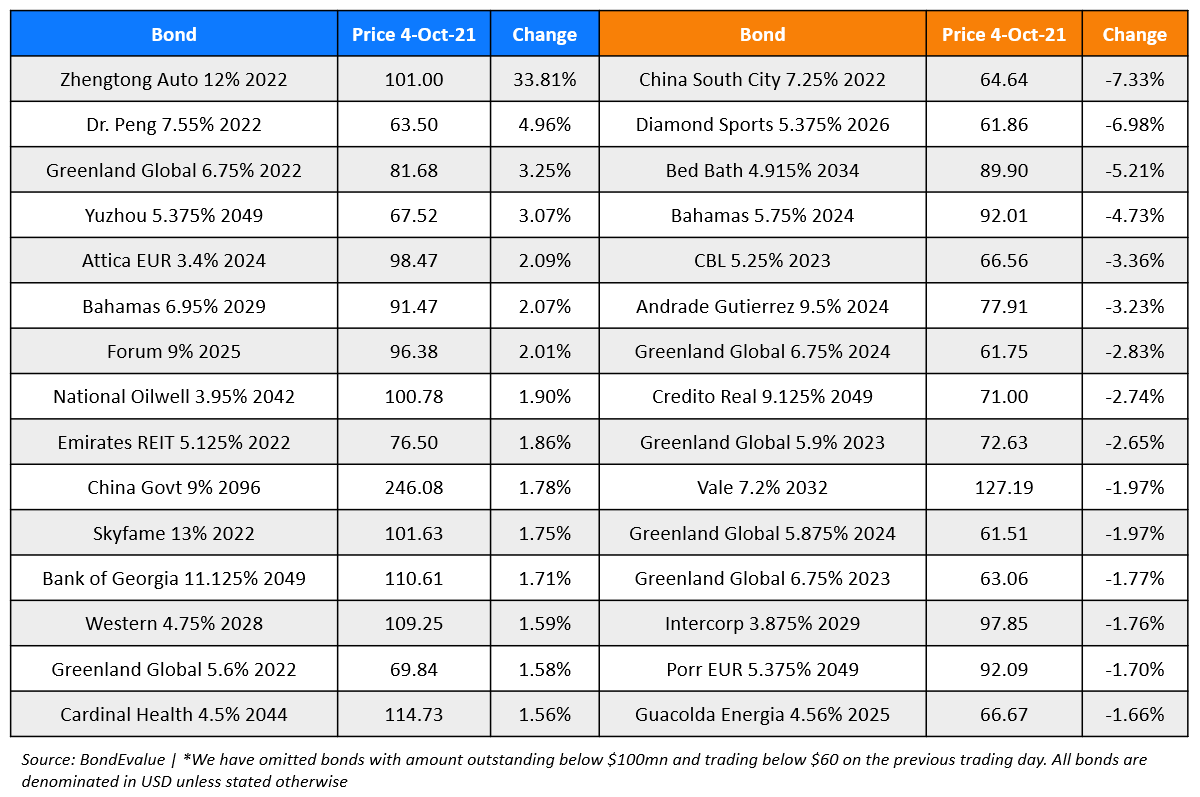